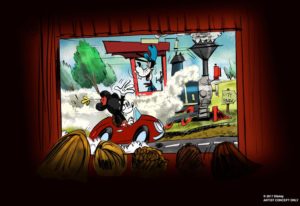 Mickey and Minnie’s Runaway Railway will be taking over The Great Movie Ride, which had its last day of operation August 13, 2017. The new ride will be based on the hilarious Mickey Shorts shown on the Disney Channel and the Mickey Mouse YouTube channel. You’ll step through the movie screen and join Mickey and his friends like never before. The ride will utilize a new projection mapping technology as well as multi-dimensional set-pieces that give the illusion of 3-dimensions, without the use of 3D glasses.