After two years of rumors following the closure of Terminator 2: 3D at Universal Studios Florida, we now know for certain that it is being replaced by The Bourne Stuntacular. But what exactly will this new show be?

Set to open next spring in 2020, Universal Orlando says that the new show will be a “cutting-edge, edge-of-your-seat live show [that] will blur the lines between stage and cinema in a hybrid form of entertainment that has never been seen before.” Let’s dig into some of the rumors we’ve been hearing for this show, as well as what we can learn from construction permits, because—”Jesus Christ it’s Jason Bourne.”

The Bourne Stuntacular was officially announced by Universal on October 15, 2019. It described the attraction as an “all-new live-action stunt show” that “will feature thrilling chase scenes, punishing fistfights, death-defying leaps and danger at every turn. And it will all happen right in front of you with live performers, interactive props and an immense LED screen – making it impossible to determine where the live-action ends and the screen begins.”

One of the biggest takeaways here is that the show WILL NOT be in 3D like its predecessor. Instead, this new show will utilize a massive LED screen. The company “TAIT” has been rumored to have been hired to handle that aspect of the show. They’ve created special effects and sets for Broadway shows, concerts, and other large venue events. They specialize in concert lighting and LED effects, cutting-edge motion control systems for background elements and set pieces, robotic systems, and more—all working in tandem to create unforgettable experiences that attempt to bend reality.

With the immersive special effects and massive screen background taken care of, the next big aspect of the show to consider are the actors themselves. Unlike the former Terminator show, which only included live actors for the beginning and final sections in the main theater, The Bourne Stuntacular is said to include stunt actors throughout the entire performance.

So, who do you turn to when you want the best of the best when it comes to stunts and stunt-trained actors? “Action Horizons Stunts” has got your covered. They’re the industry leader for stunt work in film, television, and of course, theme park attractions. They’re the team behind the immensely popular Waterworld show at Universal Studios Hollywood (as well as other Universal theme parks around the world).

To make way for this new attraction, many changes needed to be made to the original theater. With a heavier focus on live actors and stunts, the theater structure itself was actually widened. Additional wings were added to both the right and left sides of the theater. This will allow for a larger stage that can extend out on both sides.

The back of the theater structure was extended as well, adding quite a bit more backstage area for actors and technical personnel. Permits also seemed to call for an expanded armory, where things like pyrotechnic effects, prop guns, and firing blanks can be kept. 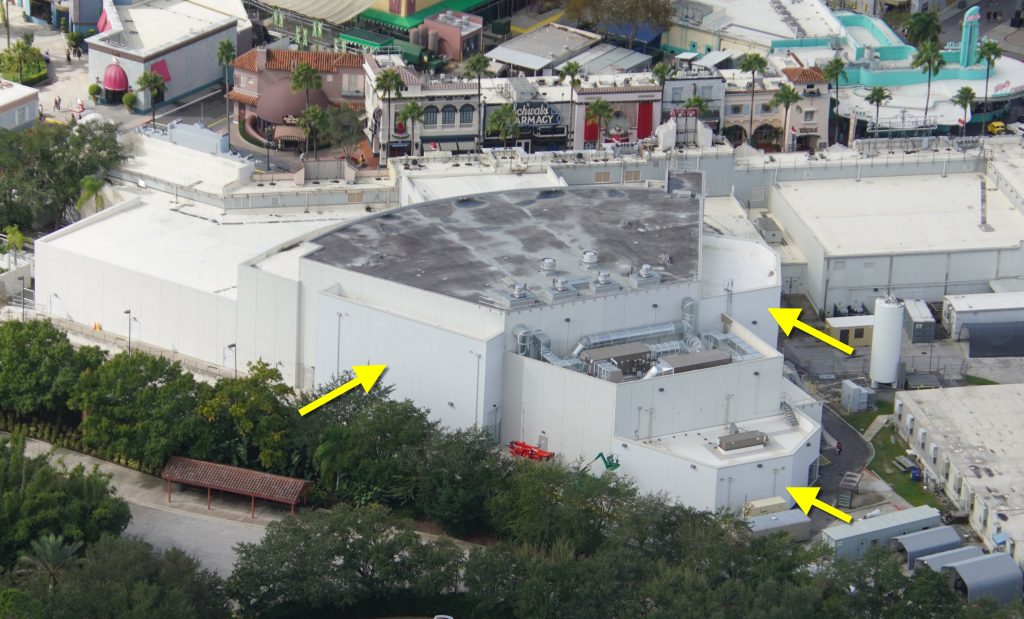 And speaking of permits and construction, there were rumors for new vents to be installed on the center stage to be used for fire effects. Several large hoods were installed on top of the building as well, which may be used to vent heat, smoke, or steam effects quickly during the show. A deep pit was dug beneath the main stage area, which could be used to hide an air cushion needed for high fall stunts.

One of the most interesting rumored aspects we have heard about is a type of treadmill that will supposedly be built into the main center stage. Perhaps this could be used to have the actor appear to be running away, or even towards us, with a moving background displayed on the massive LED screen behind them. This could be just one of the many ways the show will combine live-action and screen elements, as described in Universal’s official description. 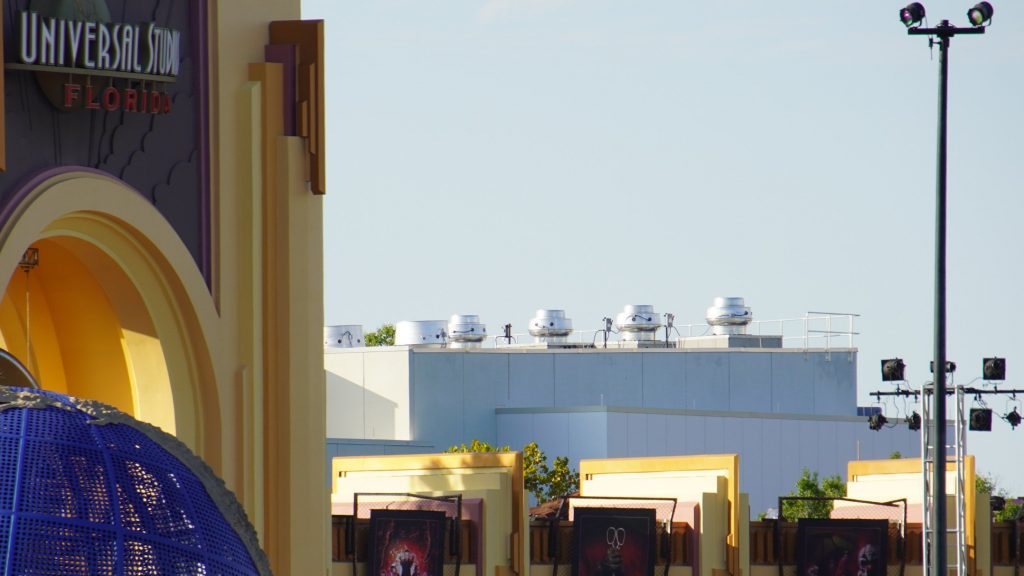 Other changes, not related to the theater itself, include the finished updated facade. Not much was done to the entrance for the new show since the former Terminator show closed. They repainted the facade, now with a more blue appearance. And in recent weeks they added a marquee sign, street side sign, and a blank warnings sign for The Bourne Stuntacular.

Inside, it is rumored that much of the existing queue has remained in place exactly as it was from the previous show, except now without 3D glasses distribution bins, as they will not be required. The queue is also likely being repainted and may be lightly re-themed to match a high-tech spy lab. 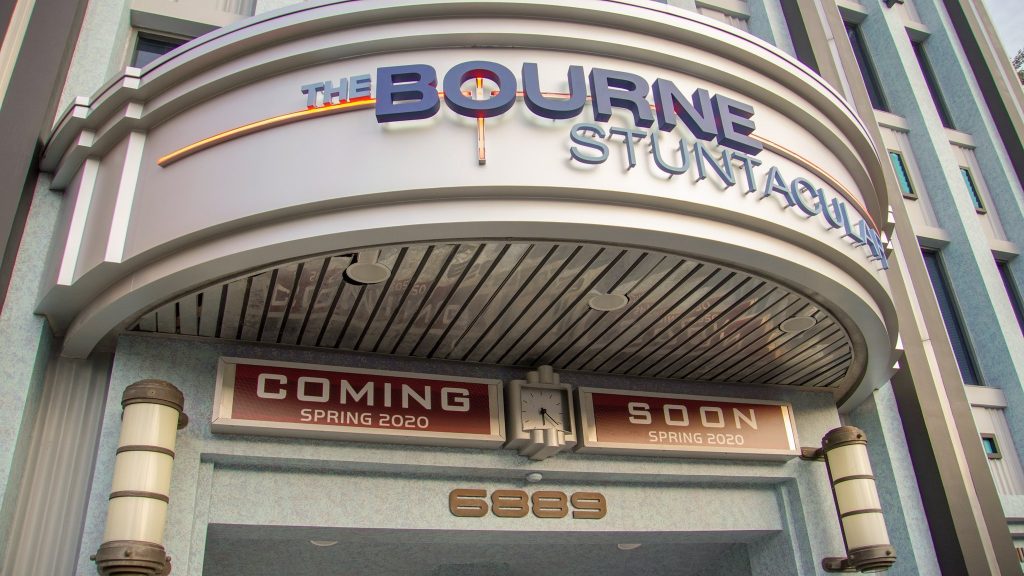 Entrance for this future attraction (Photo by @bioreconstruct)

There has been a persistent rumor that the original, screen-used Mini Cooper car from the first Bourne film, The Bourne Identity, will be on display in the queue. There has also been a rumor that elements from the famous car chase from the movie will somehow be recreated during the main show. Whether the show utilizes a real car on stage timed with screen-based movement, or other special effects trickery, is still unknown.

Other rumors have pointed to a live-action helicopter set piece being utilized during the show, however I have been unable to confirm if such a thing is true from additional sources. If it is true, this could be yet another example of how real life props and actors in the foreground can be combined with screen-based elements in the background to tell the story in a new way. 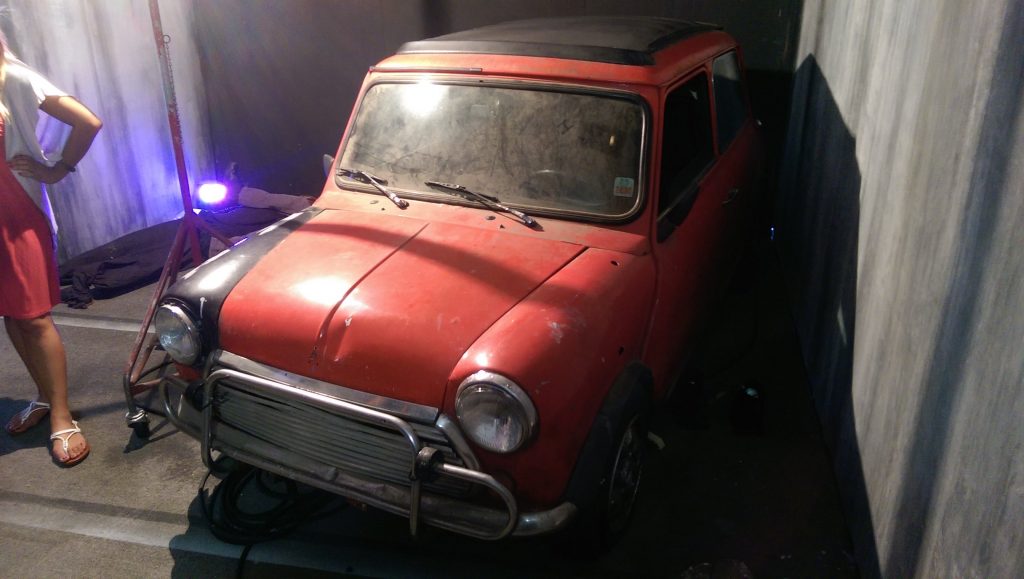 Another rumor that showed early on, when it was announced that the Terminator show would be closing, is that the new attraction would use the Dynamic Attractions Motion Theater technology. I have not found any confirmation for this rumor, but if it is true, it would mean that the entire audience area can be rotated to face different elements during the show. It could also use a motion-control base to tilt the audience in different ways to help accentuate the action.

Instead of the Motion Theater technology, I think it may be more realistic to expect only a small bit of movement in the new show. The show it’s replacing featured a sudden, short drop of the seats during an explosion at the end of the show. It was only about a half-inch drop, but it was enough to startle the crowd. This new show may incorporate something like that. There may even be more motion installed, using a pneumatic system similar to the moving seats at Shrek 4D. We just don’t know for sure yet.

Regardless of how you may feel about the property that this new show will be based on, I personally feel that they have assembled a dream team of talented folks to put it together. With Universal Entertainment producing a show starring the talented folks of Action Horizons Stunts, and featuring special effects and set pieces designed by TAIT, I think we’re in for a mind-bending treat. As Universal says, you’ll need to “see it a few times to really take it all in.”

The Bourne Stuntacular was originally scheduled to open this year, but is now officially set to open this coming Spring in 2020. Stay tuned for more details and rumors about this new show as it happens. If you haven’t yet already, check out our latest podcast all about it. The video version even includes diagrams for what some of the rumored effects may look like on stage. Be sure to subscribe to our news feed or enter your email below to never miss an update.

Subscribe to the news feed or enter your email below to never miss an update. Main Photographs by @bioreconstruct | Logo image from Universal Orlando | Other images as captioned 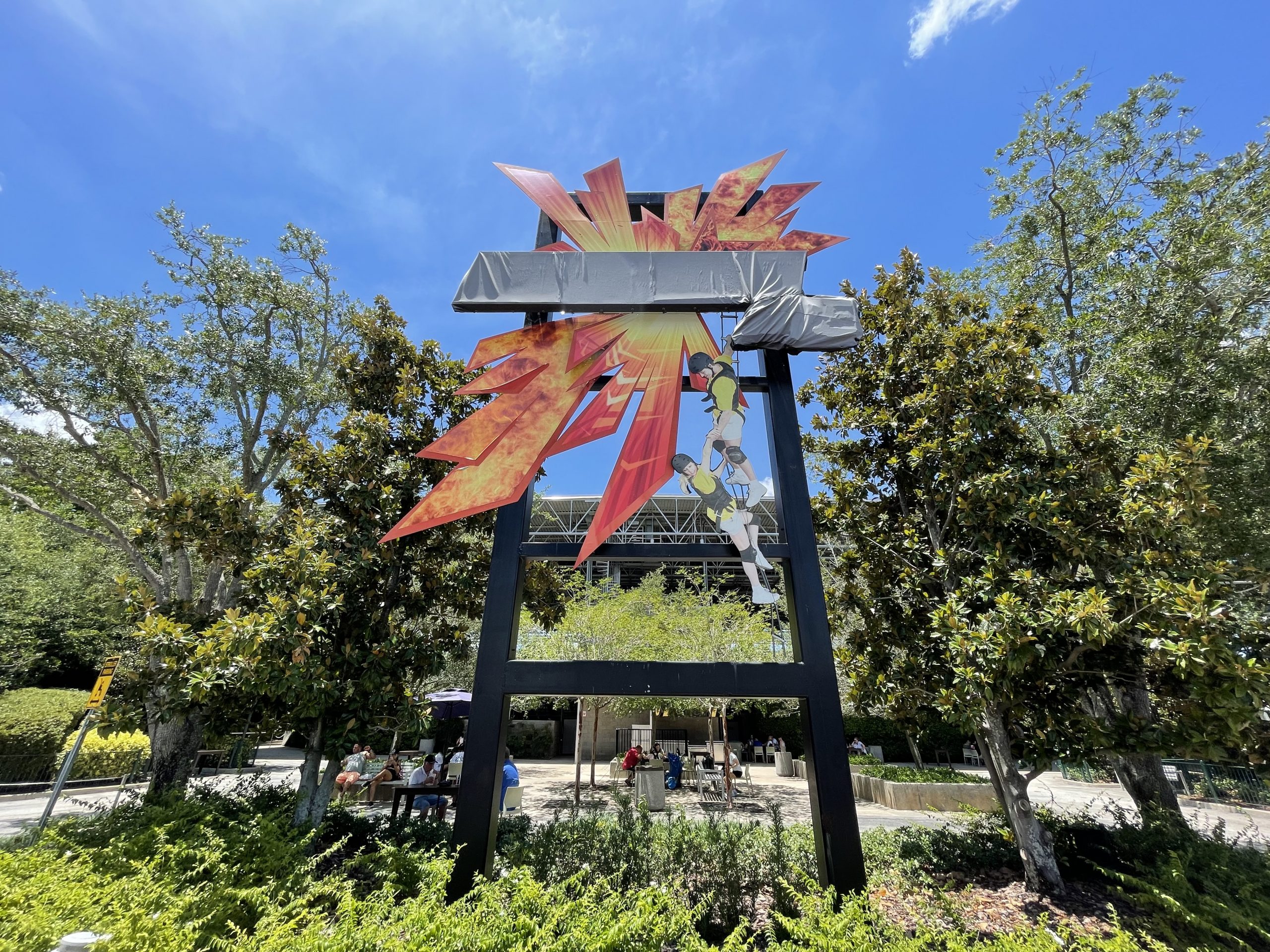