“Happily Ever After” is only the third regular nighttime fireworks show to debut at the Magic Kingdom. I was lucky enough to be among the first to see this new show on opening night, and it blew me away. This new spectacular show combines the latest in fireworks, pyrotechnics, lasers, hand-drawn animation, original music–including a new theme song and more. It’s amazing to see the shows over Cinderella Castle evolve over the decades, each one better and more advanced than the one before it.

The biggest thing that separates Happily Ever After from fireworks shows that have come before it is the castle projections. While castle projections have been a part of other shows for seven years now, this is the first time they’ve been incorporated into the fireworks show. And incorporated they are! Designs on the castle continue on into the sky by launched fireworks seamlessly. I will say that some of the story happening on the castle may detract somewhat from the fireworks themselves, which is usually the star of a show like this, but in the end that makes for more re-watch-ability. I’ll have to experience it again to see all that I’ve missed! 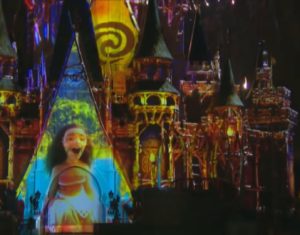 The projections include many bits of new hand-drawn animation from the original animators including pieces from animated classics of the nineties like The Little Mermaid and Aladdin. It’s wonderful seeing Robin Williams’ Genie in such a big role! Lots of more recent characters are included in the show as well, most notably Moana, who received a section devoted to her song “How Far I’ll Go.” It’s great to see a new character shine for a change after Frozen and “Let it Go” have received all of the attention in recent years. Zootopia characters and Baymax from Big Hero Six also make first appearances in a nighttime show. Some of the sequences used are a bit questionable though, namely a brief section of the Pirates of the Caribbean scene lifted directly from Once Upon a Time. I think they’re trying to highlight many of the characters and themes directly involved in the Magic Kingdom. (Let’s hope that means Moana and Baymax will make their way to the Kingdom some day soon!) 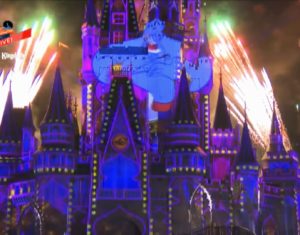 The show’s new musical score, use of classic Disney songs brilliantly edited into mash-up medleys, and an entirely new song created specially for this show are emotionally moving and always fit the action perfectly. The show runs several minutes longer than its predecessor, and just when you think it might be ending, you get one last powerful finale filled with the most fireworks you’ve ever seen. And your day at the Magic Kingdom would not be complete without seeing Tinkerbell make her way down from the castle. Don’t worry, Tink is back, and better than ever, now literally glowing in the dark. This new show involves incredible technology like lasers, LED lighting embedded in the castle and dozens of searchlights pointed to the sky, which all add the amazing spectacle!

While the beloved “Wishes” delighted guests for 13 years, it’s nice to know that the show taking its place is actually worthy of the position. Happily Ever After is not only the next evolution in nightly shows in the Magic Kingdom, but a truly worthy successor that will move you and your family. Our wishes may have come to end, but at least it’s an ending that’s Happily Ever After.

Check out the video above for clips and more information on Happily Ever After and stay tuned for more theme park news and coverage coming soon!