E.T. Adventure is the last remaining opening day ride at Universal Studios Florida (and one of the few rides that actually worked on opening day). For nearly three decades this classic dark ride has delighted guests with the sensation of flying, while also bewildering us with its colorful conclusion on the Green planet. Here are 10 out-of-this-world facts about E.T. Adventure. 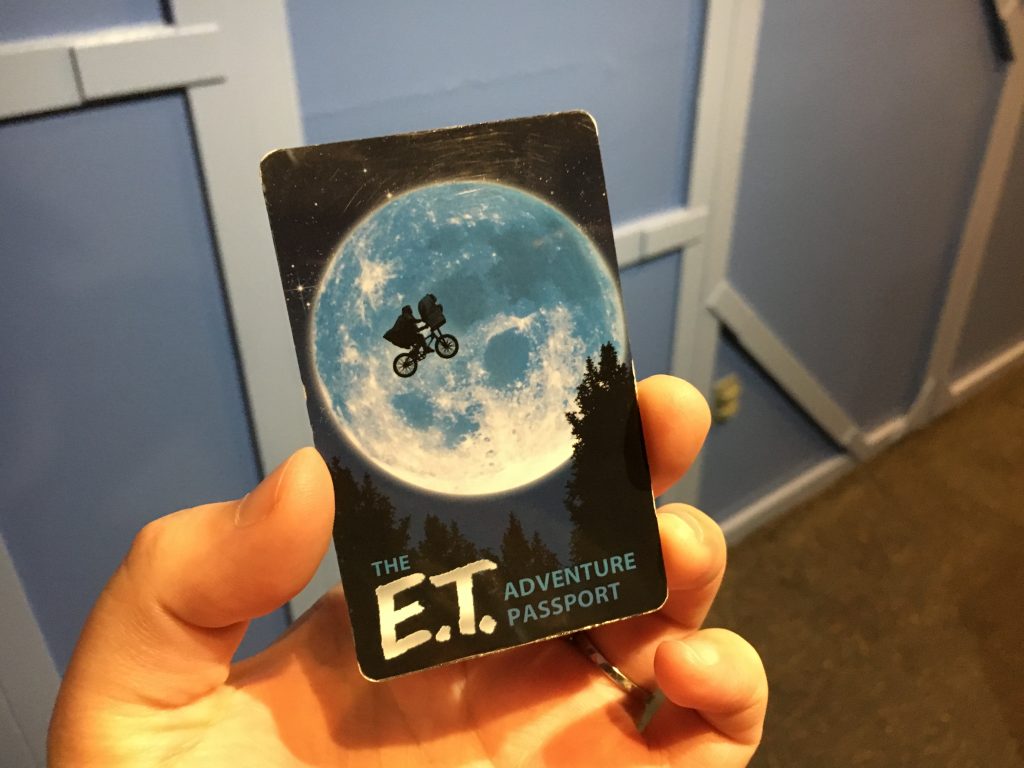 We are shown a brief pre-show video before entering the interior section of the queue. This show has gone through several changes over the years. In the original version of the attraction we were there as background actors for a new E.T. film and Steven Spielberg gives us instructions from a screening room. The show was updated soon after to give the ride a more adventurous feel, with Mr. Spielberg addressing us from the forest, and explaining how we’re going to bring E.T. home to save his planet. In 2002, for the film’s 20th anniversary, a third version was shot. This iteration includes footage of what E.T.’s friends look like, presumably so children won’t be frightened of them later on the ride. While Mr. Spielberg’s footage was updated, they did not re-shoot E.T.’s, leading to some not so subtle stitching of the two shots together.

When looking for a sponsor for this attraction, a phone company seemed like the obvious choice, (aside from Reese’s Pieces of course). “E.T. phone home” is one of the most popular lines remembered from the film after all. The ride was sponsored by AT&T, who also hosted another nearby attraction at the park named “AT&T at the Movies,” featuring an upcoming technology showcase. One of the technologies that the company was working on at the time was Text to Speech. A feature where E.T. says your name was incorporated into the ride’s ending using this technology, but was implemented by Birket Engineering. 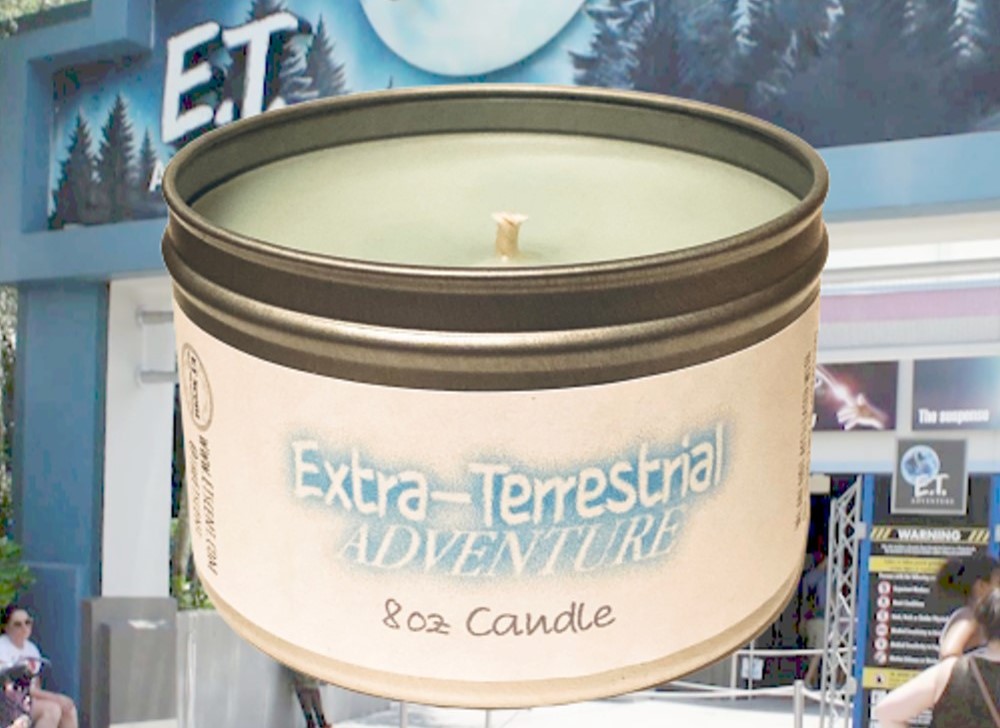 One of the standout features of the queue for E.T. Adventure has got to be the smell. Sure, the giant redwoods and movie set quality theming is top notch, but everyone remembers the smell of this ride. Countless have attempted to recreate this nostalgic scent on their own, and you can even purchase them online. According to Wikipedia, Universal uses a “pine fresh” scent created by the scent marketing company, ScentAir. Although, some claim that the interior of the building itself is so saturated with the scent at this point, that it hasn’t been pumped in in years. 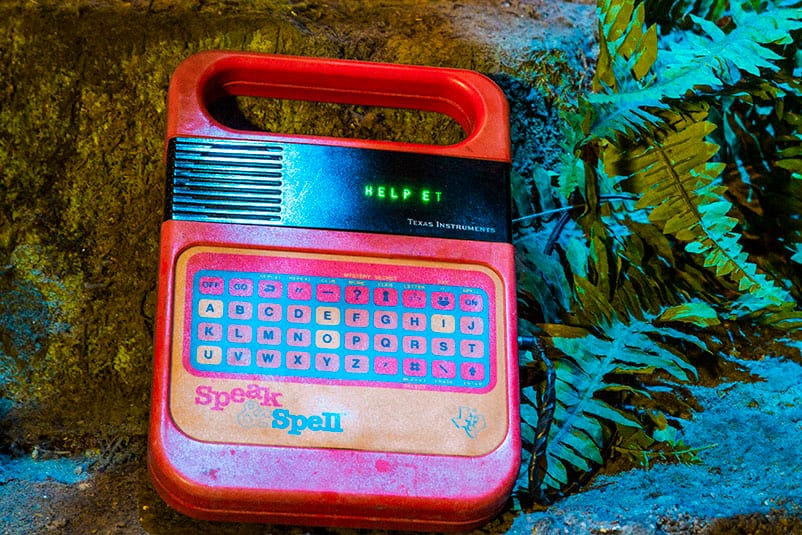 Some of the theming for the interior queue also includes a recreation of one of the most iconic props seen in the film. The communication device E.T. constructed to phone home can be found in the forest, featuring the Speak & Spell, with the letters H-E-L-P E-T that light up one by one. If you’re lucky, you may be able to spot E.T.’s glowing red heart as he runs through the forest, away from the NASA officials in spacesuits. And if you really keep your eyes peeled, you can find a animatronic rabbit hiding in the bushes, a nod to the shot of a rabbit in the film’s opening scene. 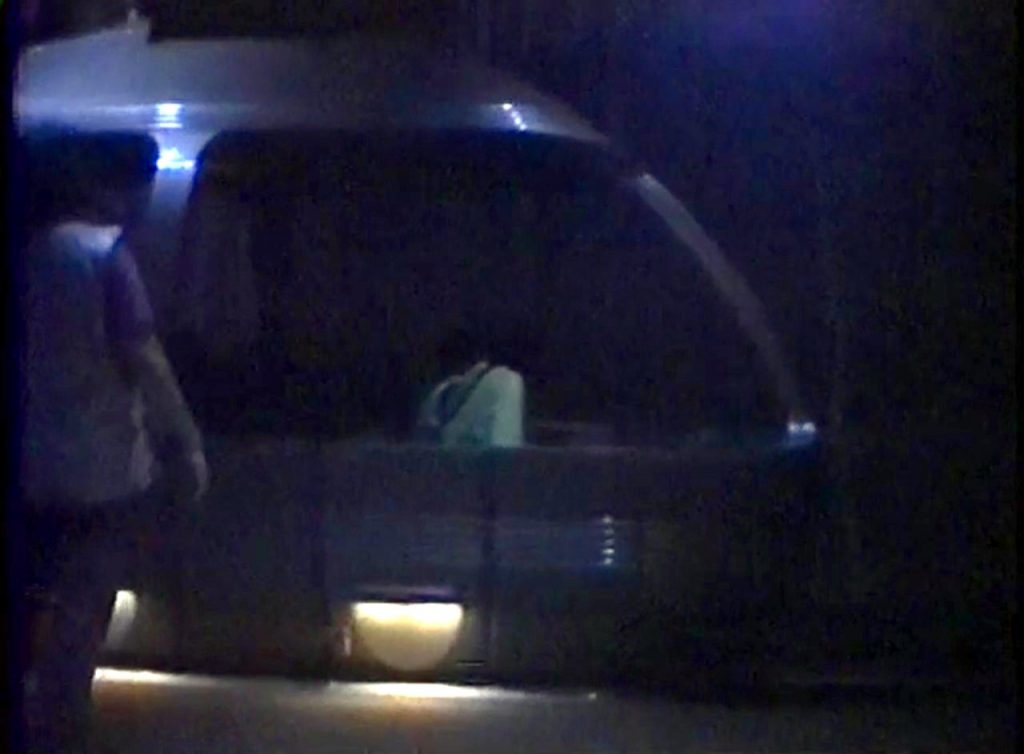 When the ride first debuted you had your choice of ride vehicle from two different options. The main mode of transport was still the groups of bikes, but back then you could also choose to ride in a spaceship. The main purpose for the ships were that these were the only ADA accessible vehicles for the ride, but later wheelchair accessibility and benches were added to some of the bike vehicles. Guests would request the bikes and hold up the line when the spaceships were available, and there were complaints that it was hard to see the ride through them. Even though the spaceships are long gone, Botanicus, E.T.’s teacher, still asks us to bring E.T. home “on a spaceship or carry him on your bikes” when he appears in the queue. 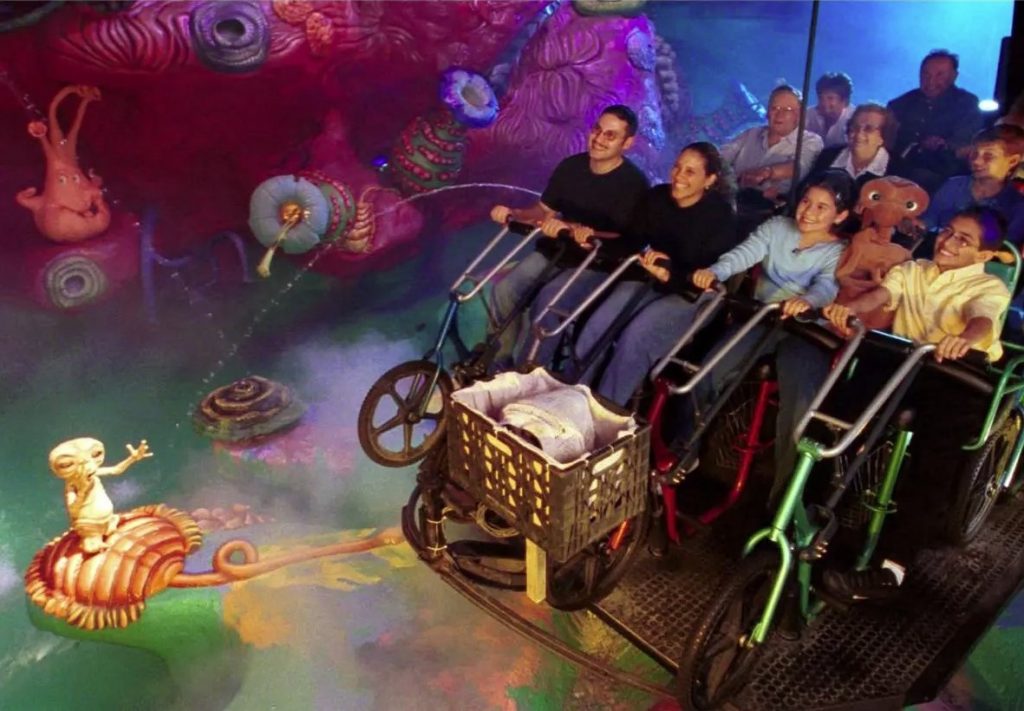 E.T. Adventure uses a suspended ride system, where riders are seated in open air gondolas. There are 3 rows of 4, for a total of 12 riders. The track and some of the ride systems were installed by Dynamic Attractions, who have installed ride systems for many other Universal attractions, including The Amazing Adventures of Spider-Man and Harry Potter and The Forbidden Journey. The ride system for E.T. allows for a somewhat thrilling ride, with sharp turns and a little swaying of the ride vehicles, while remaining safe enough for younger children. During the ride, E.T. will rise up in the basket mounted to the front-center bike. Families can request this special seat for their child before boarding. 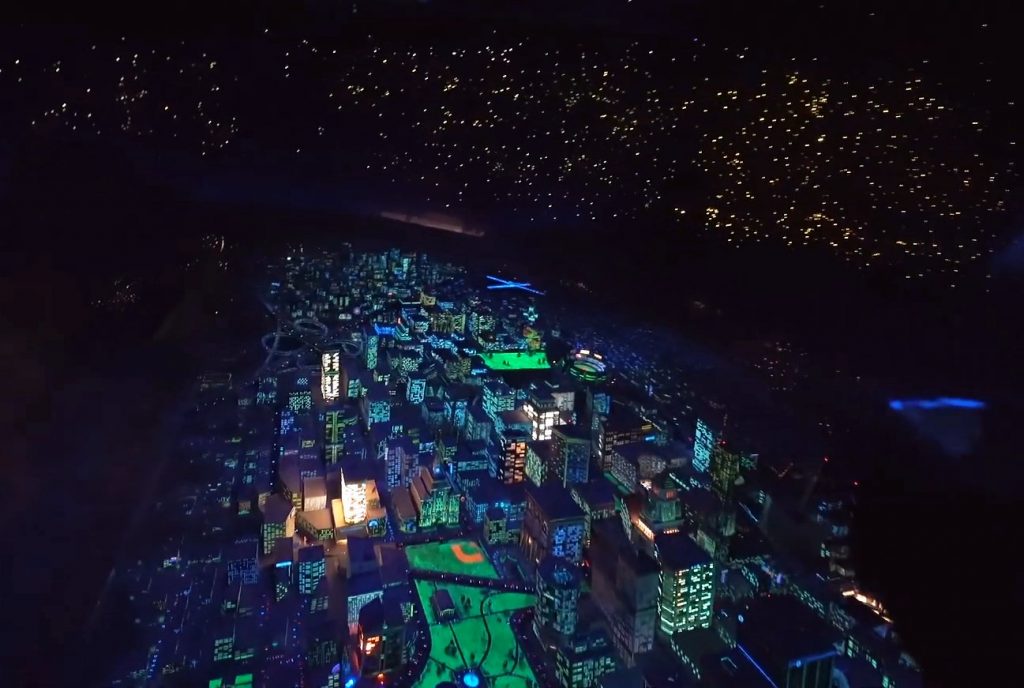 Flying over the city (Image from video by Theme Park Shark)

In a scene that is not unlike one from Peter Pan’s Flight at Disney parks, we soar over a city below. Forced perspective makes it feel like we are climbing higher and higher as the buildings become smaller and smaller while we travel further along. If you look closely below, (and are lucky enough to be seated on the left-hand side,) you can see moving cars, a football stadium and two baseball fields. Before the scene ends, we see a set of bike silhouettes as we cross in front of the moon, recreating the famous moment from the film. The music swelling in the background is from John Williams, composer of the original film, who created a special arrangement specifically for the attraction. 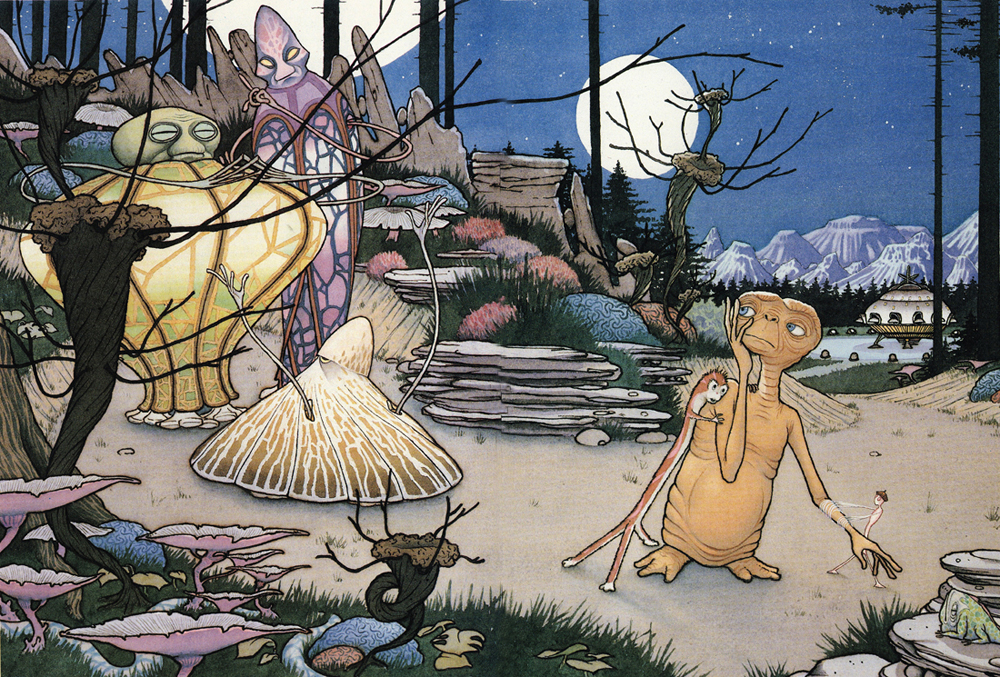 Sally Dark Rides created almost 300 animated characters and out-of-this-world plants for the ride. Some of the production design for the Green Planet’s environments and characters were inspired by a book from 1985 called “E.T.: The Book of the Green Planet” by William Kotzwinkle. This novel was a sequel to the original film, and gives us a glimpse into the world E.T. calls home. Things that made it directly from the book to the ride include the character of Botanicus, the idea that many of the inhabitants of the Green Planet are plants, like mushroom people or flower people, and even E.T.’s gourd-shaped home was inspired by the book. The trippy designs on this part of the ride start to make a little more sense once you see the art from the children’s editions of this nearly forgotten book. 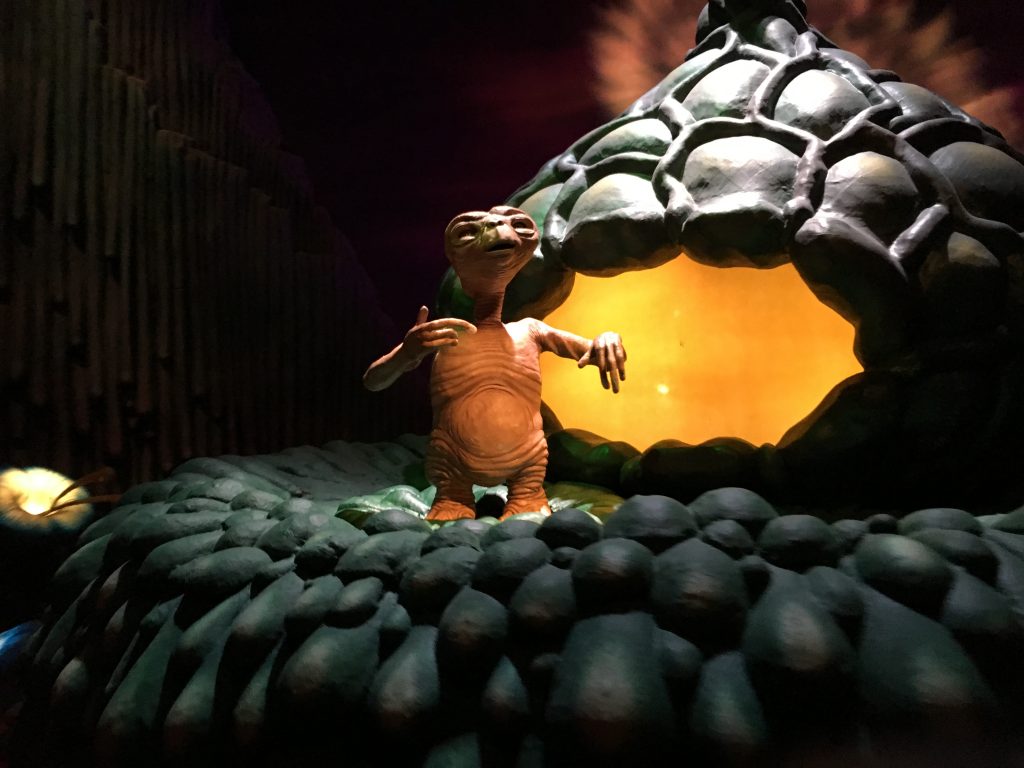 E.T. has one last surprise for everyone before the ride ends, a personalized goodbye. Earlier in the queue, we were assigned an “Interplanetary Passport” with a barcode that corresponds to the name we gave the Team Member. When the attraction first opened, and we were actors for a new movie, the barcode cards were themed as our “Passes” to enter the closed set, and they were handed out by “stagehands”. In 2014 the voice system was completely overhauled with updated technology, and E.T. can now say over 20,000 different names.

10. Out of This World Memories 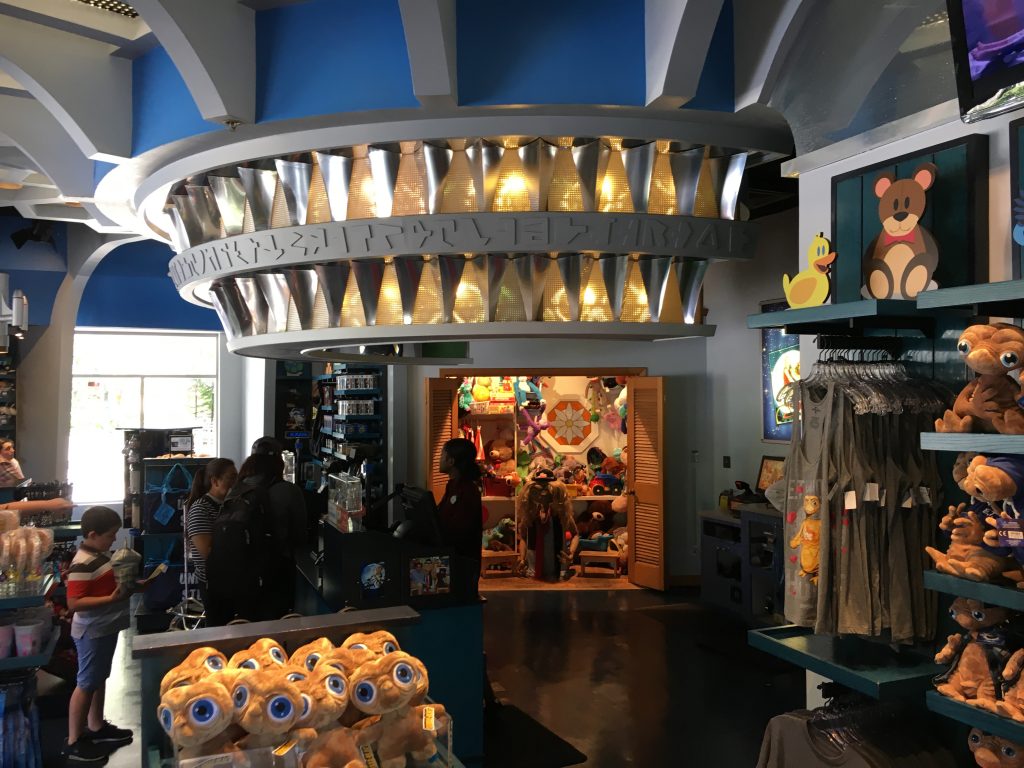 Since the park opened in 1990, guests could create a magical memory with E.T. at the ride’s exit gift shop, E.T. Toy Closet. In addition to adorable plush and souvenirs you can purchase, this shop has always offered two photo ops with the lovable extra-terrestrial. You can get your photo on a bike with E.T., which used to have a physical backdrop, but switched to green screen in later years so it looks like you’re really flying. Or, you can get a photo in E.T.’s closet, surrounded by toys, just like in the film.

E.T. Adventure was added to Universal parks in Hollywood and Japan, but both of those locations have since closed, leaving the original in Orlando as the sole remaining version. Families have been creating happy memories on the E.T. Adventure ride for close to 30 years now. We can only hope that Universal Studios Florida never closes this magical attraction, so we can keep creating memories for years to come. 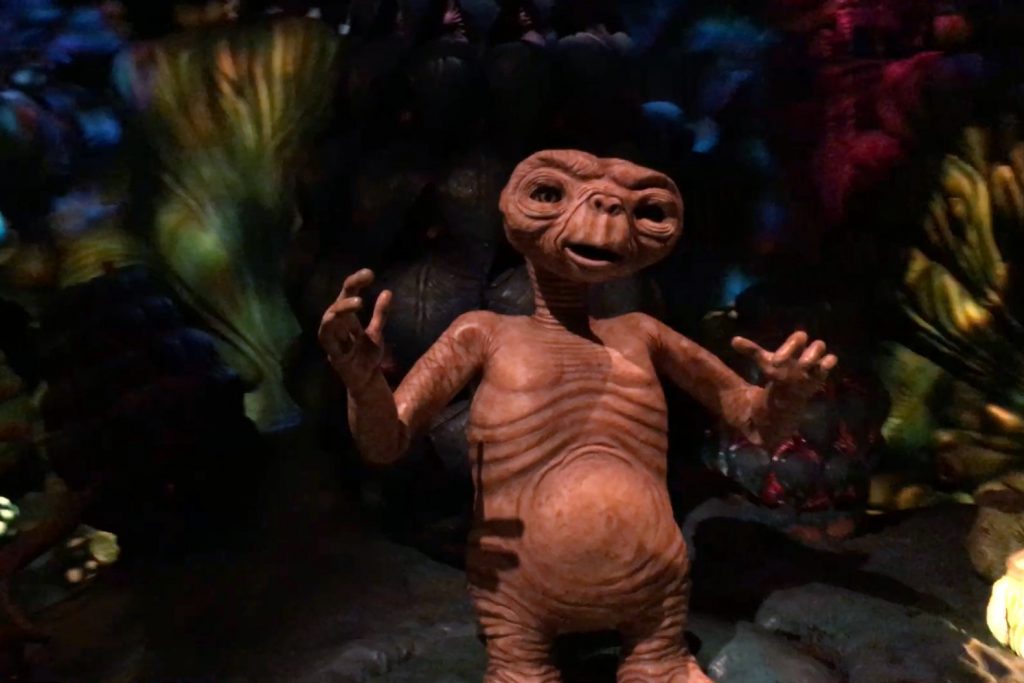 That’s all for now, but to bring the magic of ET Adventure home, check out ETScent.com and use promo code “PARKSTOP” to save 15% off your order. I’ve tried all the candles claiming to smell like the ET queue, but I swear this is the only one that gets it right. Try it yourself! And be sure to check out our previous theme park facts articles for more fun trivia, and watch the video version of this article for additional visuals! 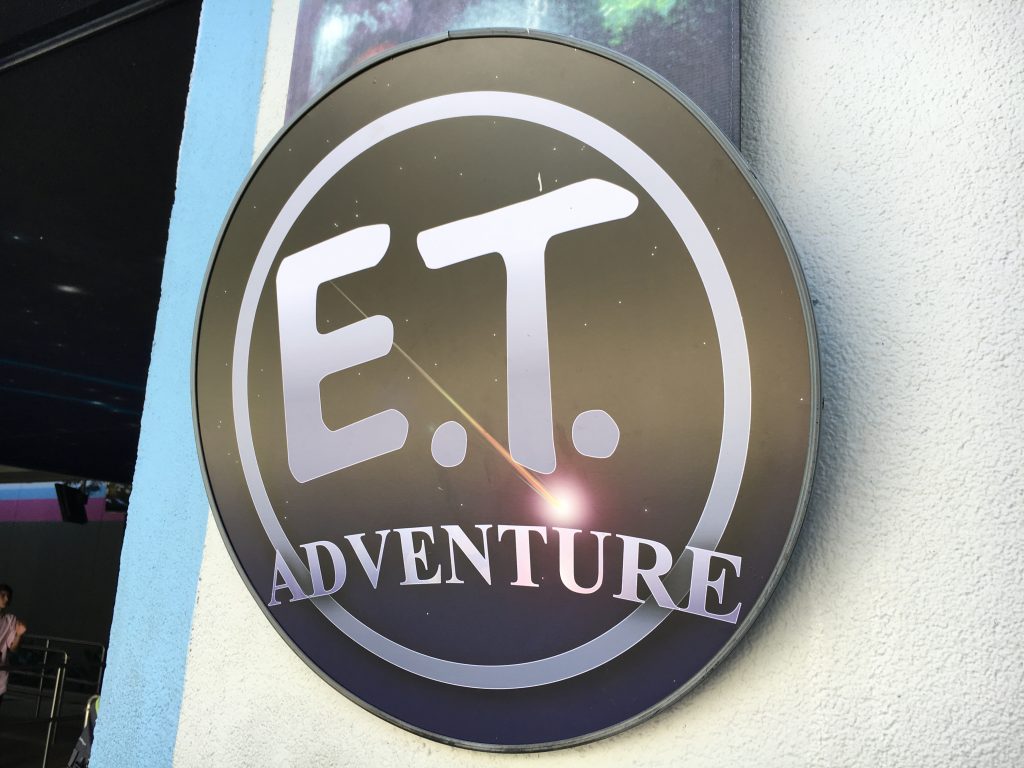 If you’re looking to visit E.T. at Universal Orlando be sure to request your free vacation quote from Destinations in Florida. These travel planning experts can help you plan your dream vacation with the best deals on theme park tickets and on-site hotels. The best part is, their service is completely FREE when you book through them!

Stay tuned for theme park news and updates. Subscribe to the news feed or enter your email below to never miss an update. Photos by Alicia Stella (unless otherwise noted)