For more than a decade, the outdated properties of Woody Woodpecker’s KidZone in Universal Studios Florida have been spared from rethemes and demolition. Numerous attempts to tear them down and build something fresh have been thwarted at every turn.

Some say that the land these attractions are built on may be “cursed.” Here are just some of the concepts for new rides we almost got, but never did, thanks to the KidZone curse. Be sure to check out the video version for additional visuals below.

Part 1 – The Bates Motel Checks Out 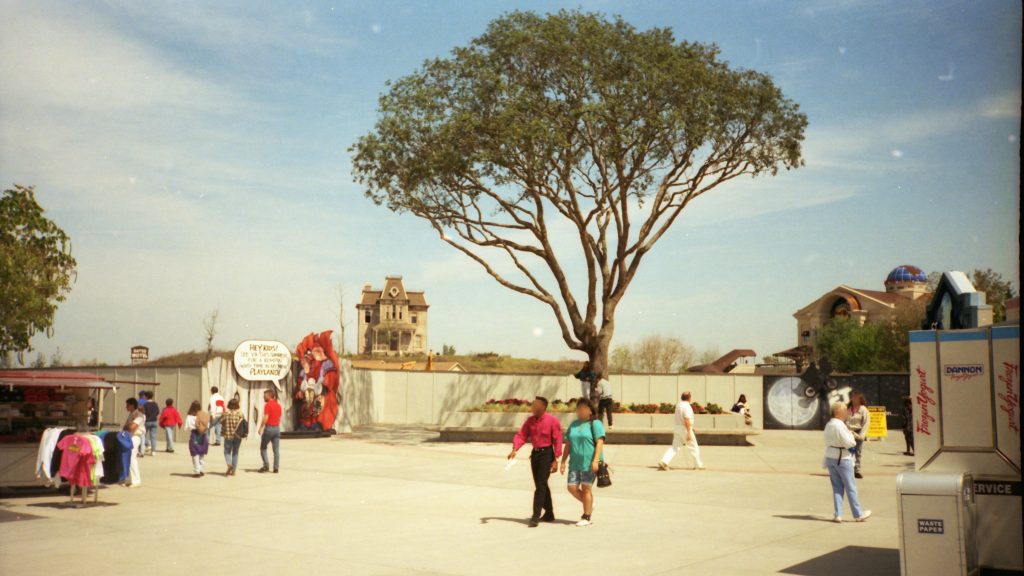 When Universal Studios Florida first opened in the summer of 1990, there wasn’t a “KidZone.” Instead, this area had a walkway that led to the Hard Rock Cafe, located just outside the park, and the Bates Motel and house set that had been used in the filming of Psycho IV. The nearby Animal Actors Stage and E.T. Adventure were then part of the park’s “Expo Center” land, which would also contain Back to the Future: The Ride, when it opened the following year.

The area didn’t start to become a “Kid’s Zone” until Fievel’s Playland opened a couple years later in 1992. It was themed with sets and characters from the recent film “An American Tail: Fievel Goes West.” Strangely enough, children playing in this new playland would have the creepy Psycho house looming in the background. In 1995, the Bates Motel set was demolished to make way for A Day in the Park with Barney. But once again, children still had that scary house sitting at the top of the hill.

Finally, in 1998, the Psycho house was removed, and Curious George Goes to Town was added to the area. A year later, Woody Woodpecker’s Nuthouse Coaster was built, bringing the area’s namesake character into the land. Animal Actors and E.T. Adventure, as well as the Barney theater and play areas, became known collectively as the Woody Woodpecker’s KidZone, exactly as we still know it today, 21 years later. 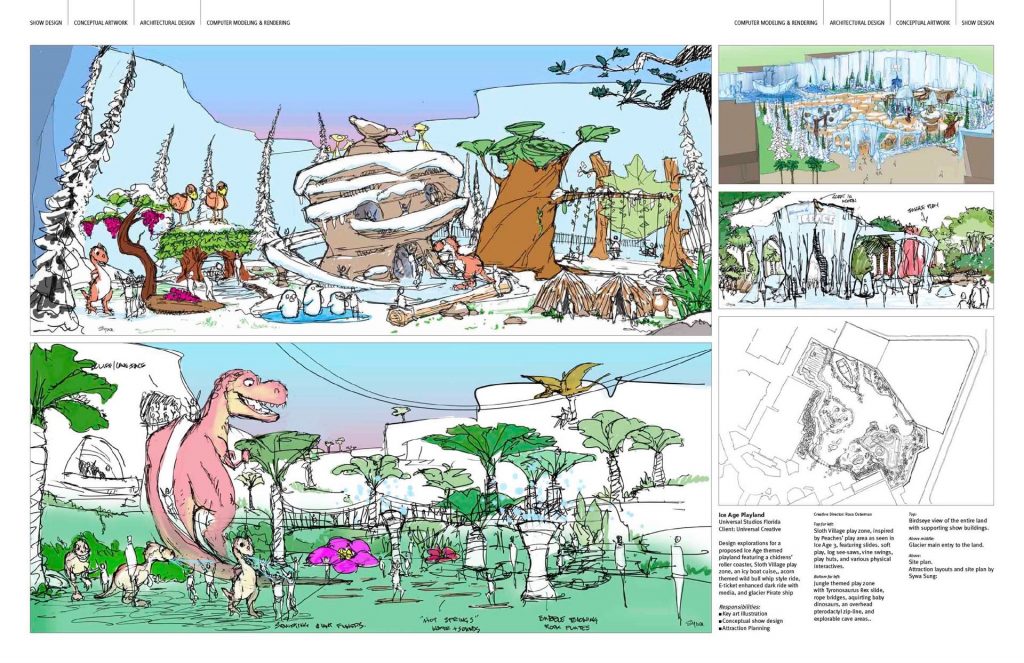 Sometime around the release of Ice Age 4, Universal started exploring the idea of retheming the KidZone area to the popular film series. It’s not clear if talks with 20th Century Fox ever happened, or if Universal was just developing a proposal before approaching them, but concept art for what the new area would contain was created.

The plans for this new land would replace Fievel, Barney, and Curious George, leaving E.T. and Animal Actors in place. It would also keep Woody Woodpecker’s Nuthouse Coaster, but retheme it to fit into the new area. Another flat ride would be added too, a whip ride themed as acorns and Scrat. New play areas would be created as well. The back of the area would feature a new E-Ticket dark ride. 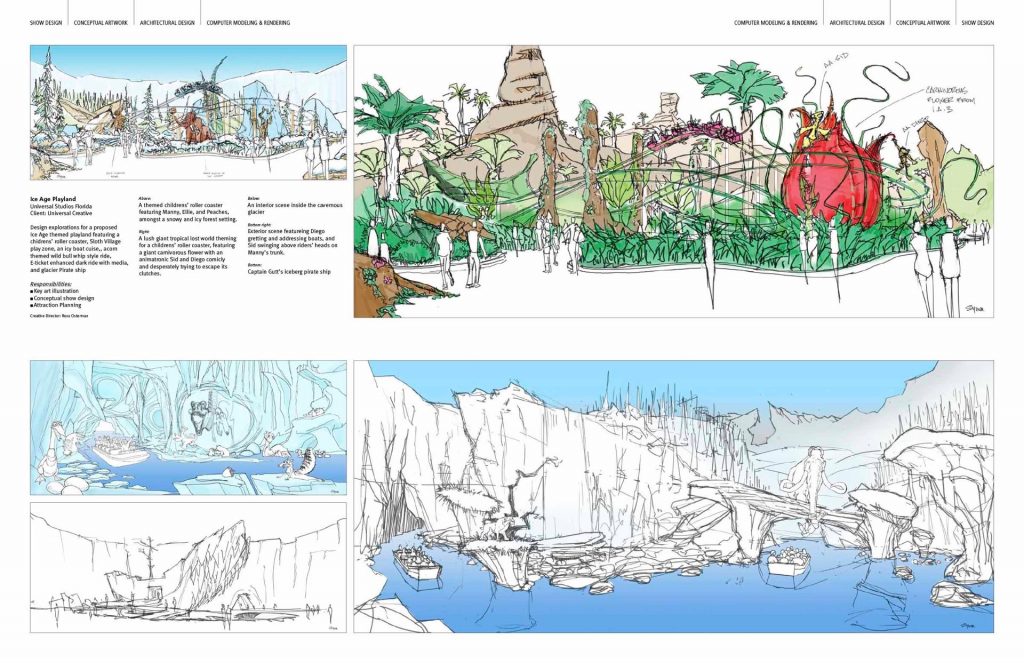 The main attraction would be an indoor boat ride located at the back of the land. This ride would be set within a massive glacier, and would take riders through cavernous scenes filled with a mix of animatronic characters and projected media. Outside, a massive iceberg pirate ship from the fourth film would be seen between the ride’s entrance and exit.

It’s not clear why the project failed to get off the ground. Whether it was rejected by Fox or never even pitched, we may never know. But one thing’s for certain, this early concept would only be the first of many to replace KidZone, but others would get much further in development.

Part 3 – I can’t Smurfing Believe It 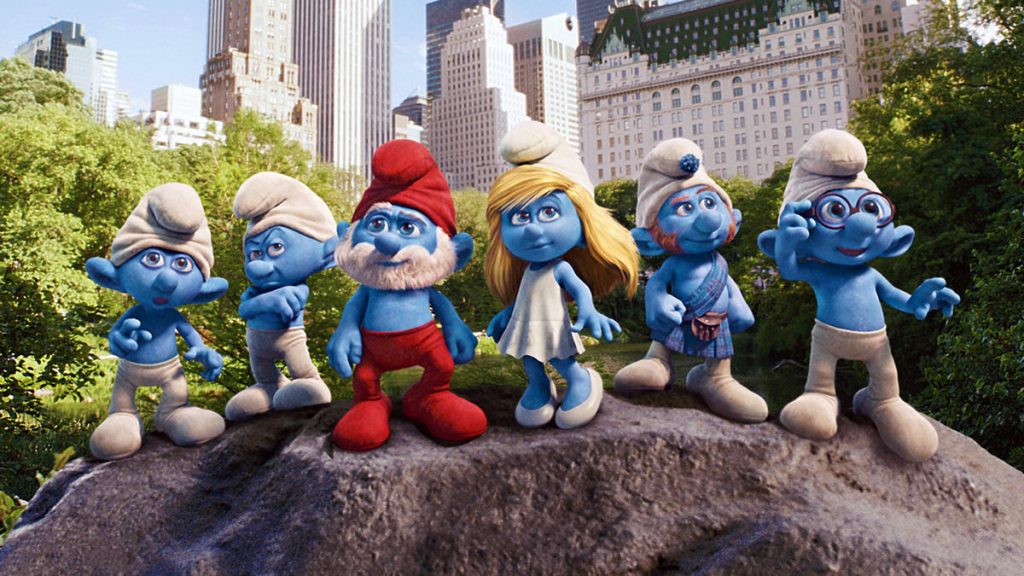 In the summer of 2013, it was rumored that Universal was in talks with Sony Pictures to bring the Smurfs into the parks. At first, many assumed they would be adapting the classic cartoon series, but it soon became clear that this concept was to be based on the live-action films, the second of which was about to be released in theaters.

It was originally rumored to be a new attraction with its own mini land, similar to the Ice Age concept. But after a survey started making the rounds, where Universal asked for thoughts on a possible ride concept, it started to become clear that this was meant to be a retheme of E.T. Adventure. While some believe this concept never got as far as the survey, industry insiders reportedly confirmed the E.T. replacement was on the table before that survey was ever sent out.

According to the description in the infamous survey, the attraction would’ve been “a suspended dark ride, simulating a flying balloon experience with large dioramas, environmental effects, vignettes, projected media, and animatronics.” The story had us invited to Smurf Village for a party celebrating six-months without an encounter with the evil Gargamel. 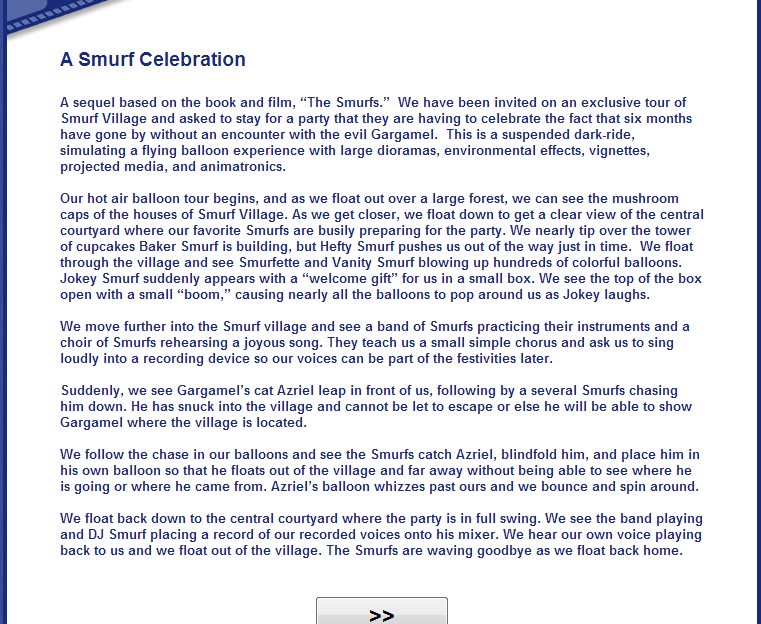 Once aboard the ride vehicle we would float through Smurf Village, encountering many of the characters including Baker Smurf making cupcakes for the party, Jokey Smurf with an exploding gift, and a Smurf band playing music. At one point, Gargamel’s cat Azriel would leap in front of us, followed by several Smurfs chasing him down to stop him from telling Gargamel where their village was located.

It’s believed that the survey itself may have killed the project, especially once people realized it might end up replacing E.T. Adventure. Bad press from the pitch probably didn’t help, (or the sequel’s less than stellar box office returns.) The next concept for KidZone would’ve been a much more sweeping replacement however, and it probably got the closest of all the concepts to actually be built. 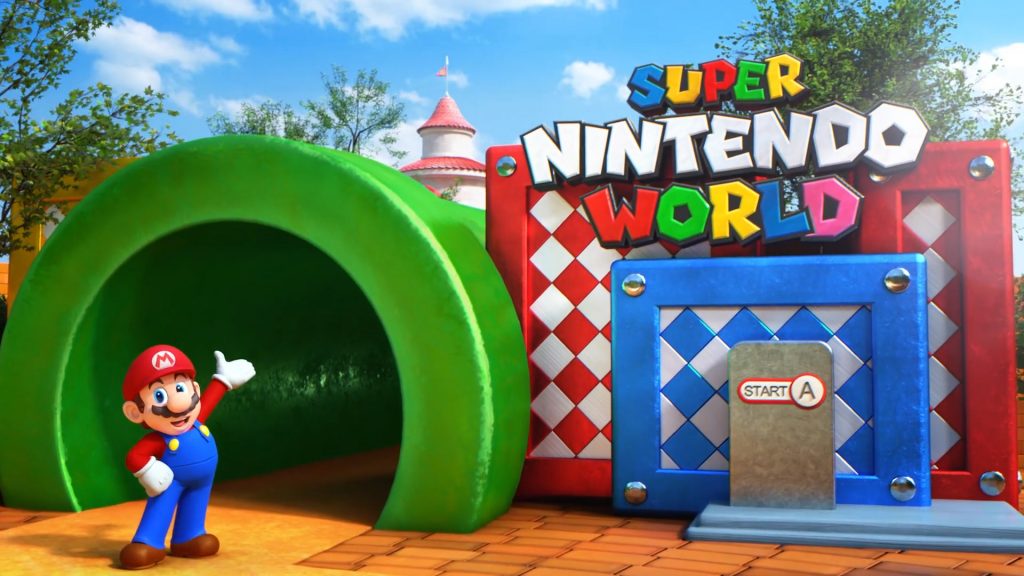 Four years later, in the summer of 2017, permits were filed to demolish ALL of the attractions in Woody Woodpecker’s KidZone, (except for E.T..) Unlike prior pitches, this project was massive, and would even require Animal Actors to close. This was to become the home of Super Nintendo World in Orlando.

With a Mushroom Kingdom land featuring a Yoshi ride, a massive indoor Mario Kart attraction, and a Donkey Kong mini-land with a Mine Cart Coaster, Super Nintendo World at Universal Studios Florida was well into development by the Fall of 2017. The land was designed to be built in Universal Studios Japan at the same time, and would be built to the exact same specifications for both parks, each taking up about 9 acres. In Florida, this not only meant removing most of the existing KidZone attractions, but utilizing some of the backstage area as well. 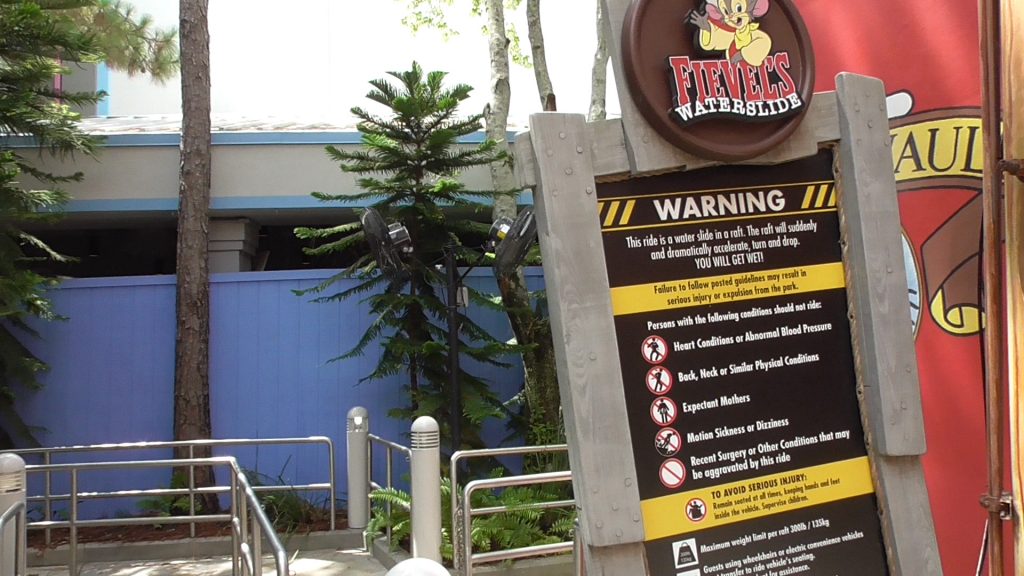 Work walls up along E.T. Adventure in preparation for demolition of surrounding area

In preparation for building this land, work walls went up around the queue for E.T. Adventure, since that ride was to remain open during demolition and construction. The KidZone area is usually utilized as entrances and queues for a couple of the haunted houses during the yearly Halloween Horror Nights event, but for 2017’s event, those queues were re-routed to different areas of the park, as impending demolition was set to start.

But then, suddenly, the project halted. The work walls came down. The schedule at the Barney Show was extended into the new year, after previously set to end in the coming weeks. Even the Animal Actors theater received a new coat of paint. It was clear they were no longer planning to tear it all down. But why?

Universal had been in litigation regarding the use of their newly acquired land a couple miles south of the current resort in Orlando. It was in the Fall of 2017 that they won the right to build a theme park on this new land, and so, their priorities shifted. The new plan was to take the fully completed plans for Super Nintendo World and plop them into the brand new park, later named “Epic Universe,” as they knew Mario would be a big draw.

Unfortunately this took the target opening date for Orlando’s Super Nintendo World from 2021 to 2023… Even more unfortunate is that no one predicted a global pandemic would throw a wrench into the new park’s plans before it could even get off the ground. 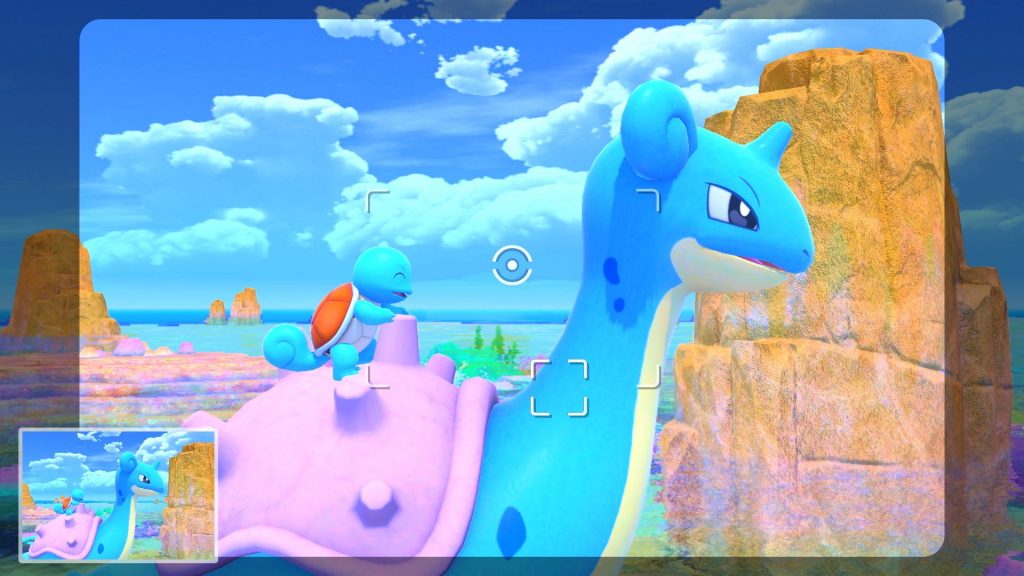 In the Fall of 2018, while the Mushroom Kingdom and Donkey Kong Country sections of Super Nintendo World were about to begin construction down the street at Universal’s new theme park, another part of Nintendo was expected to move into KidZone instead, this time based on Pokemon. This was part of a plan to have Nintendo-based lands open in each of the Universal theme parks, the same way that Potter expanded to both parks with the addition of Diagon Alley.

The plans for this re-do for the area would go back to leaving Animal Actors intact, and, of course E.T. Adventure would once again be spared. This time however, E.T. was supposedly set to receive a new re-routed entrance, unlike Super Nintendo World’s plans, which were going to leave a walkway to E.T.’s existing entry. Theme Park University reported that the plans for a Pokemon land went pretty far, “with a master plan, ride manufacturers and more nailed down.” 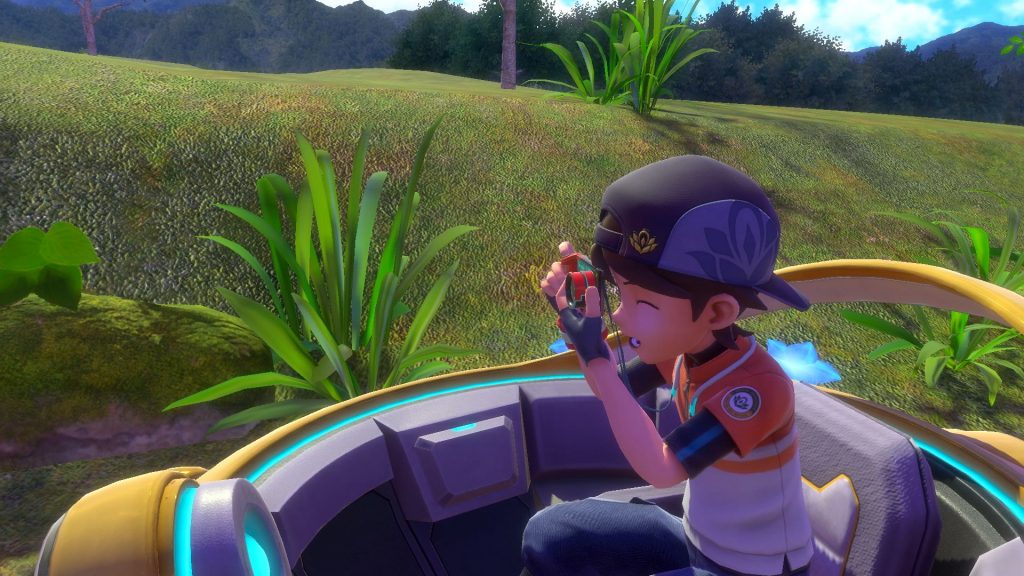 According to rumors reported by Midway Mayhem, the new land’s main attraction was set to be a “Pokemon Snap Safari” ride. It would be interactive and feature more than 200 Pokemon characters from the games, shows, and movies. The ride would pass through multiple areas representing different Pokemon environments. Plus, it possibly might’ve been an omnimover style attraction, which would’ve been a first for the park.

There was also a separate rumor that coincided with these plans to hide Pokemon around the entire theme park, expanding the areas where guests would be able to search and find them using some type of interactive technology.

Rumor has it Universal executives may have been hesitant to expand the Nintendo offerings at the theme parks until at least one of the Super Nintendo World lands had opened. They wanted to see what the guest response was like when the first land opened in Japan in a couple years, before putting so many eggs into one basket. Apparently, these completed Pokemon plans are sitting on a shelf somewhere, waiting to be dusted off someday.

Part 6 – More Concepts and the Future 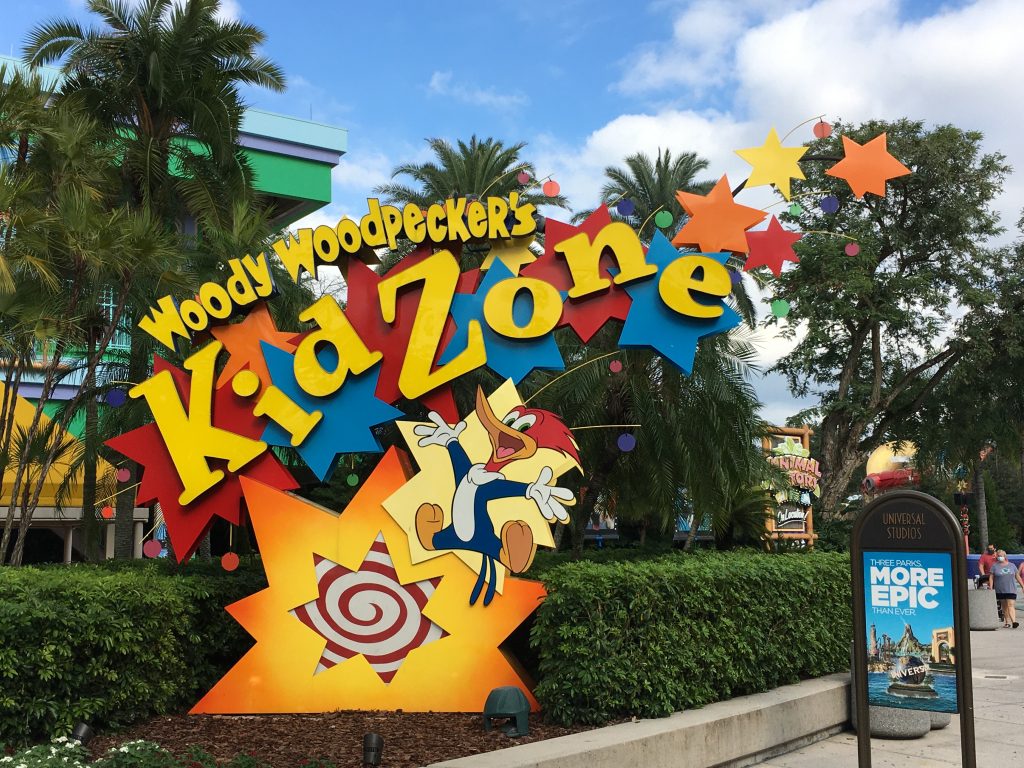 These few concepts may only be a small handful of what has actually been pitched or planned throughout the years. Rumors for attractions and play areas based on properties like Hello Kitty, My Little Pony, and Scooby Doo have cropped up from time to time. Some have speculated on the possibility of an Illumination land, featuring the Sing theater from Universal Japan and soon to open at Universal Beijing, as well as the Secret Life of Pets dark ride opening at Universal Hollywood. Others have suggested that DreamWorks’ Trolls could take over the area, given that they already have meet and greets nearby.

Regardless of the possible future of the area, and no matter how many plans seem to come and go, it certainly *feels* to many that these twenty-year old, outdated properties, may be here to stay for all eternity. Almost, as if this area is cursed. Almost, as if someone is watching over the land, even though we tore down her house more than two decades ago. Nothing has been able to beat the KidZone curse yet, and if Mother gets her way, nothing ever will. 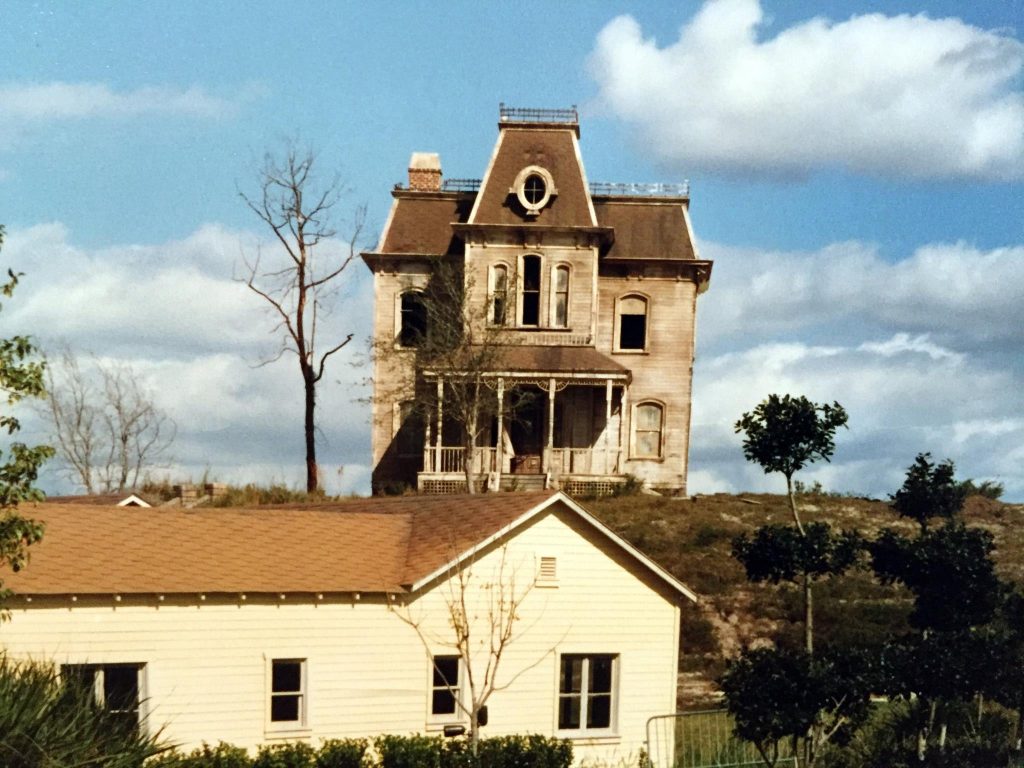 That’s all for now! Be sure to check out the video version of this article here. And you can see our previous articles about unbuilt attractions here. Subscribe to the news feed to never miss an update, or enter your email address below.