Universal Orlando team members have been getting a preview of the theme parks yesterday and today ahead of this week’s reopening. Since we have guests in the park, that also means we’re getting our first on-the-ground photos of the Jurassic Coaster in months!

The following are just some photos that were taken yesterday by @WDW_413 on Twitter. They give you an idea of how massive some of the supports are for the new coaster, and what the skyline will be like when this new project is completed next year. Track is going up fast though, and you can even see more pieces added as the photos go on! Check out the photos below, and stay tuned for more Jurassic Coaster news coming soon!

First up, the image above and the next image shows us the current state of the skyline across the lagoon after entering the park. On the left will be the top hat coaster move. Then the track will slope down in front of the Discovery Center, enter into the large 540 circle on the right, before returning low to the lagoon to the left. 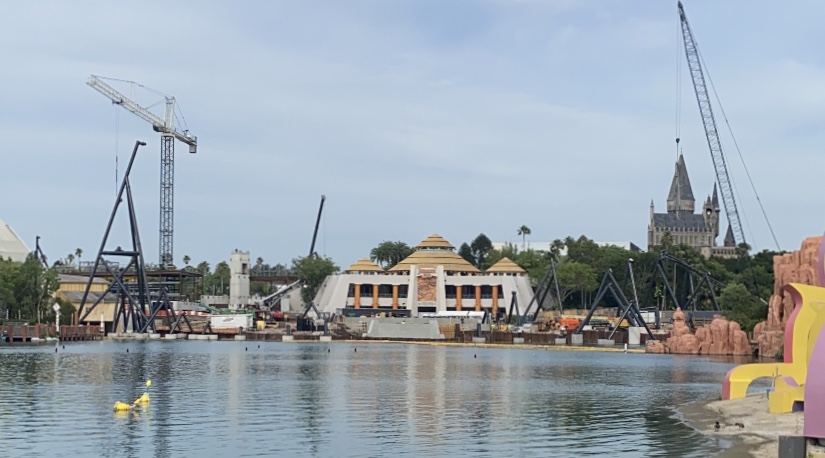 The next set of images show what’s been installed so far for the 540 circle. The close shots of the track are taken from the back porch of the Three Broomsticks. Notice how the coaster reaches its lowest point here, so as to not interfere too much with the Potter area. There are rumors that the walls at the back porch may even be raised to help block the view (and sound) from the coaster. 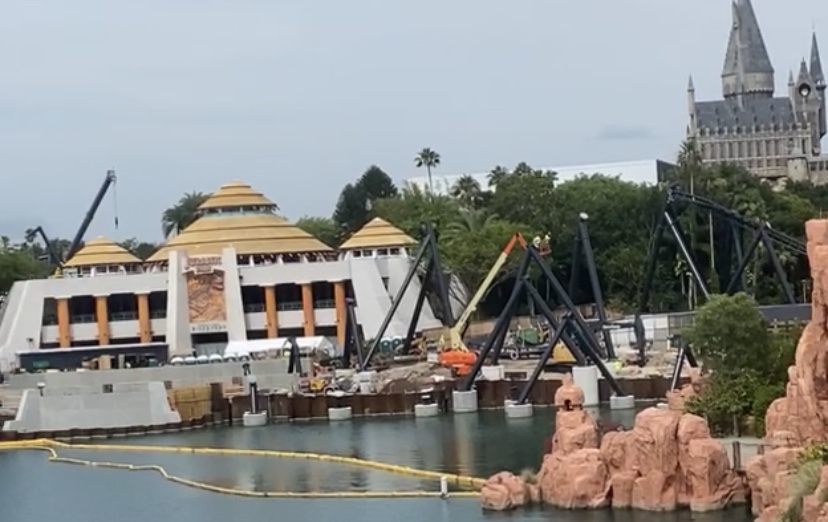 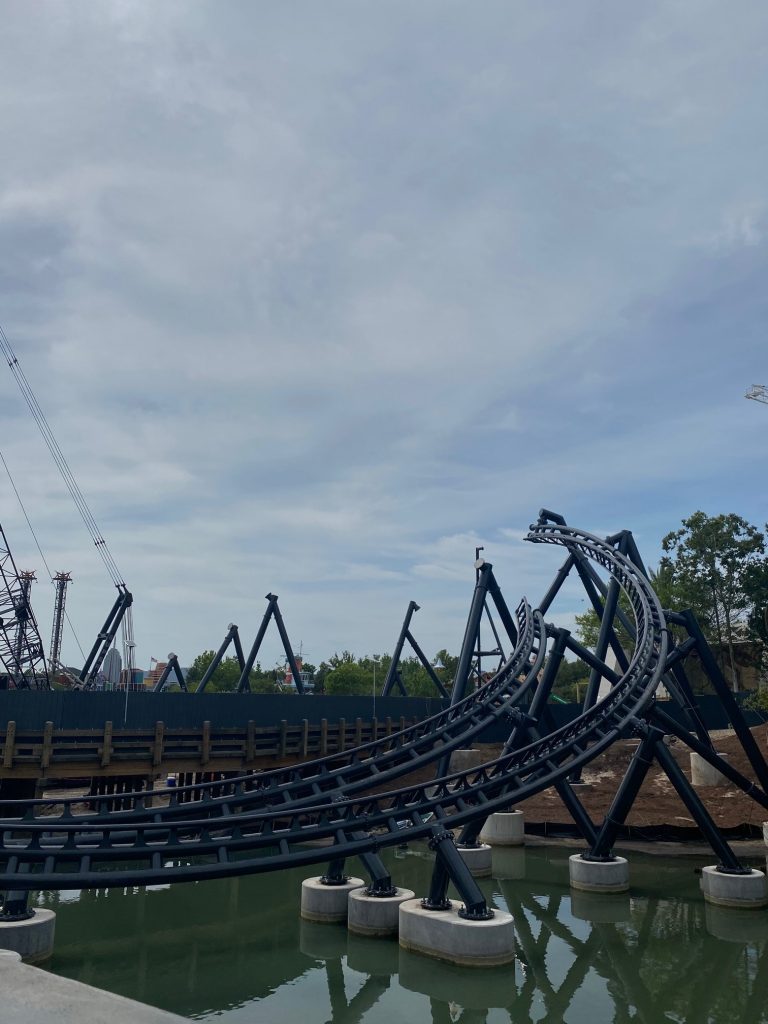 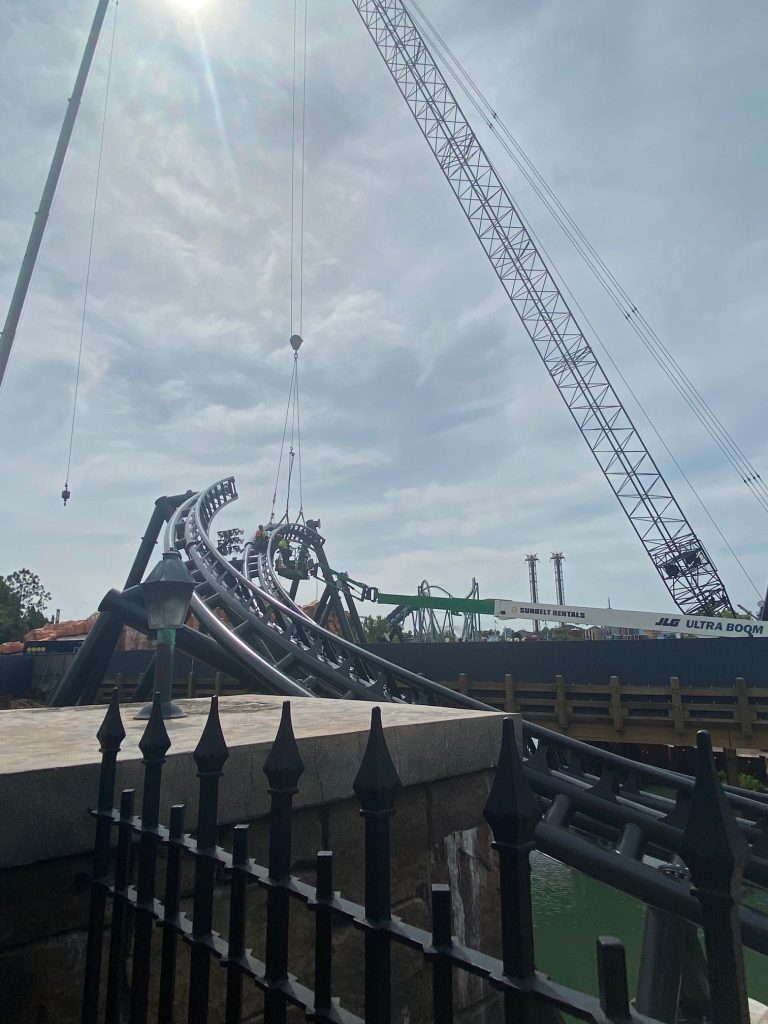 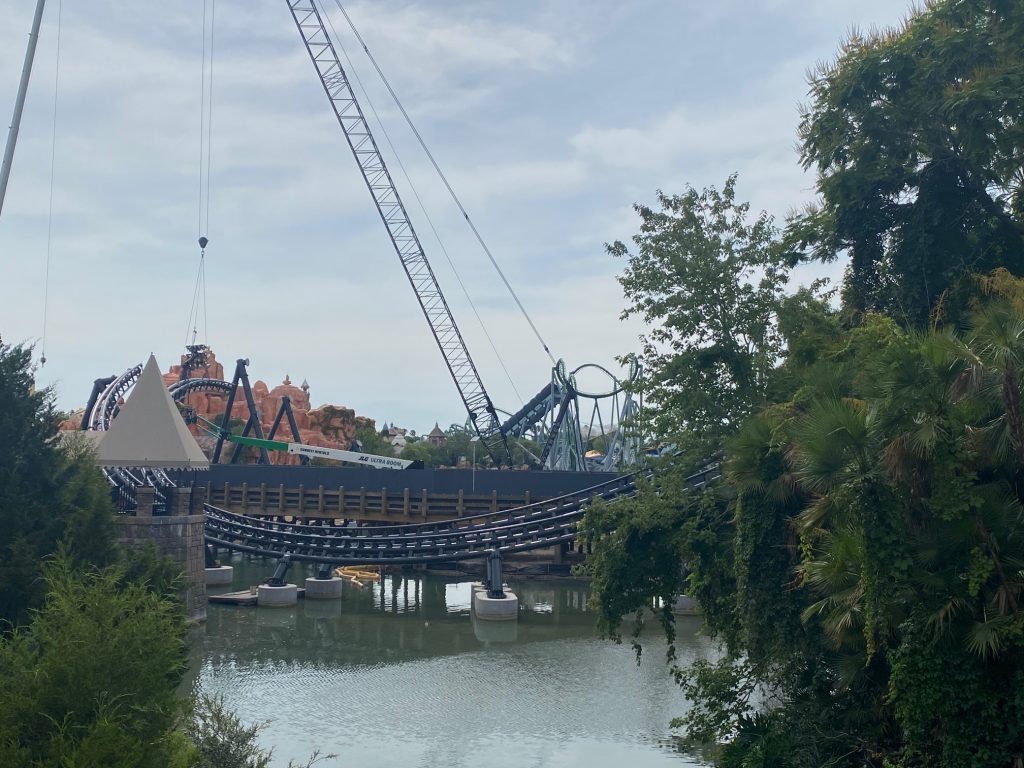 Looking to the left side of the Discovery Center waterfront, let’s check in on that massive support for the top hat. This section will have riders launched straight up, and then curve right back down. This thrilling element will be the tallest and likely the fastest part of the attraction. In the first image below you can also see the maintenance building, as well as the warden tower and queue areas taking shape. The following two photos of the top hat were taken behind the Popeye ride in Toon Lagoon, for a close up view. 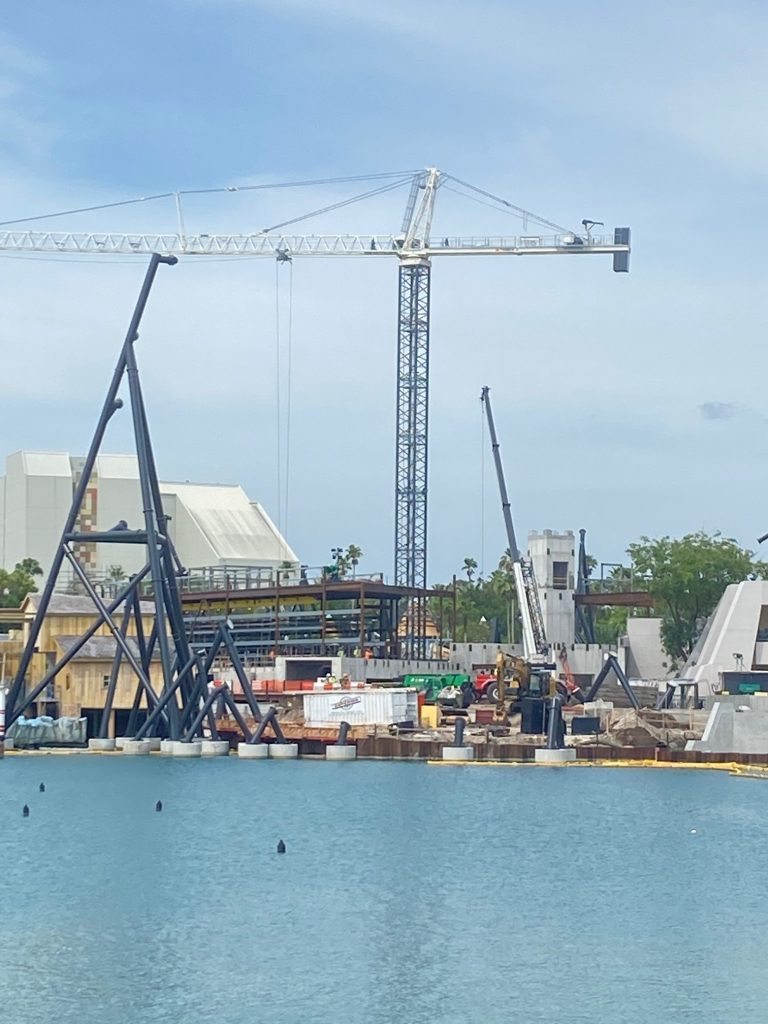 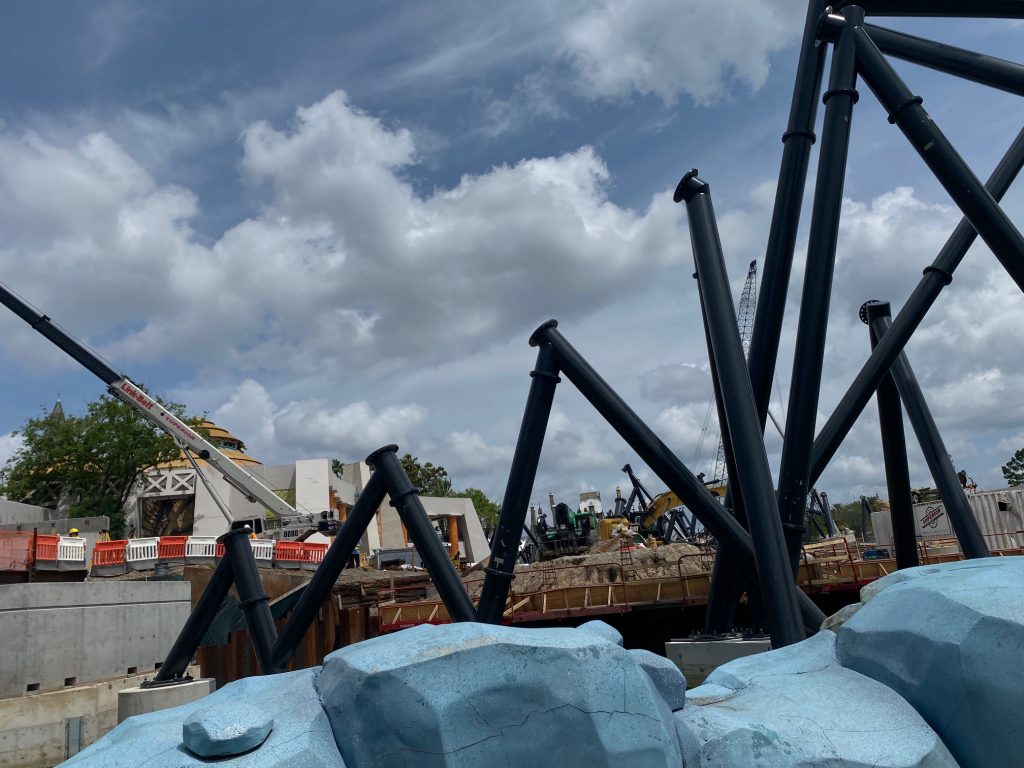 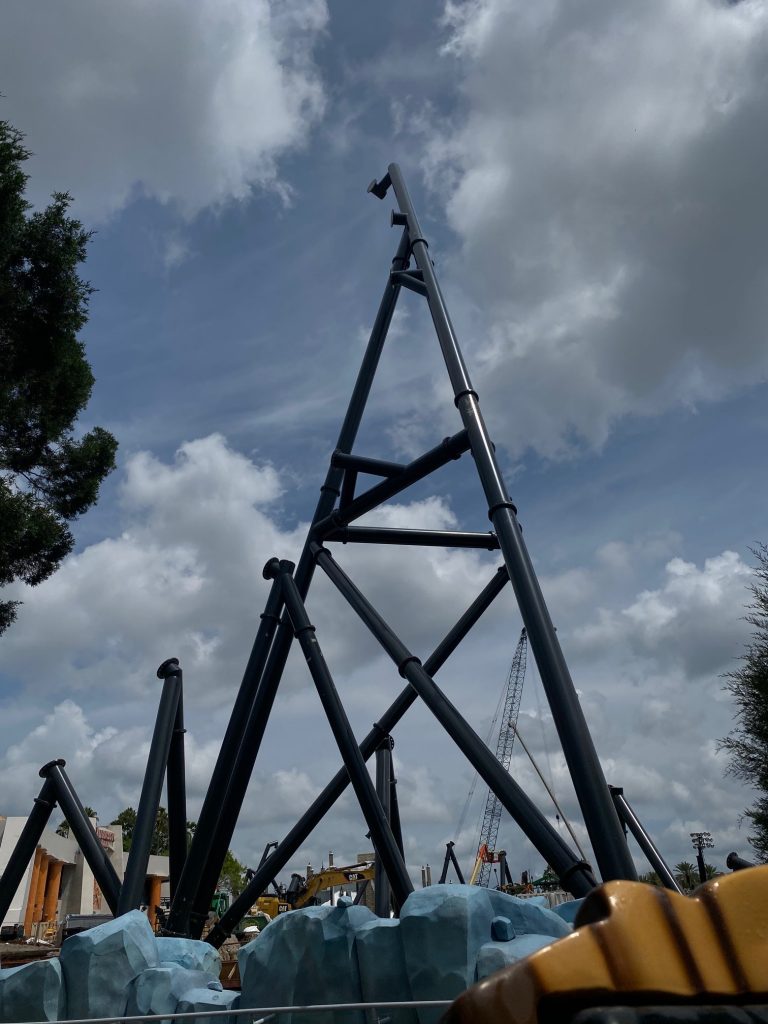 Moving now to behind the Discovery Center, the next three photos were taken on the main walkway through the Jurassic Park land. The first is a view of some supports near the start of the ride, seen right next to the Burger Digs entrance. The next are views from standing near the entrance to the River Adventure ride. In these pics you can see supports, track, and even some of the newly installed steel structure that will later hold rockwork and themed elements. 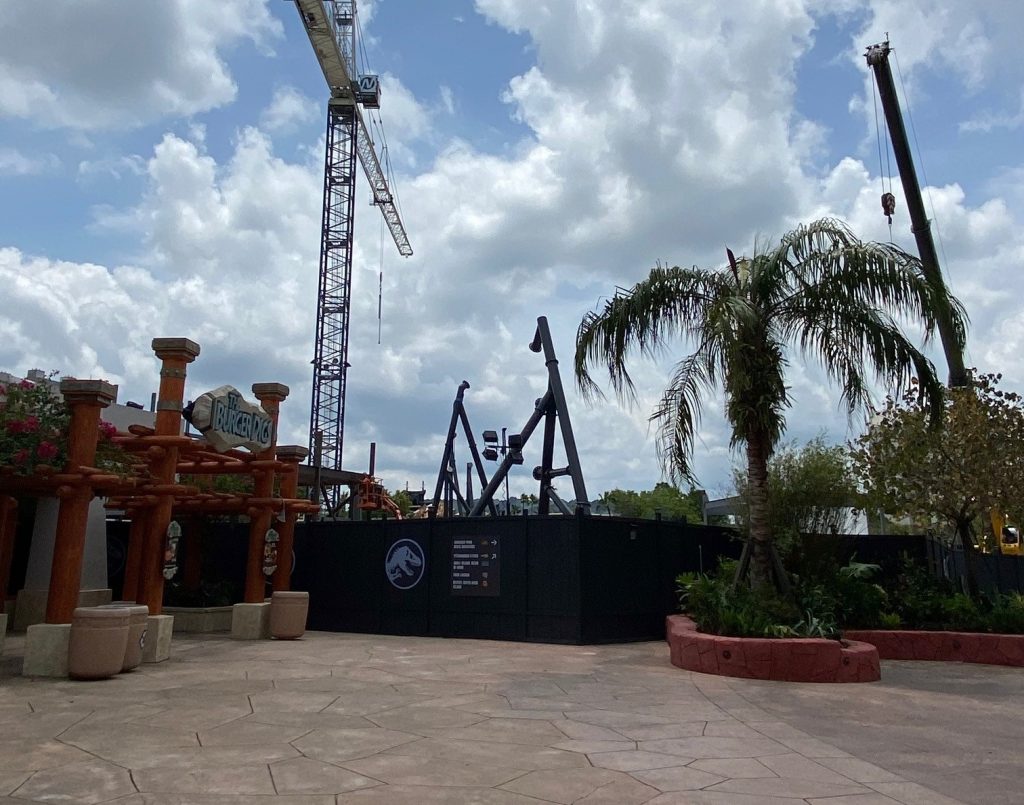 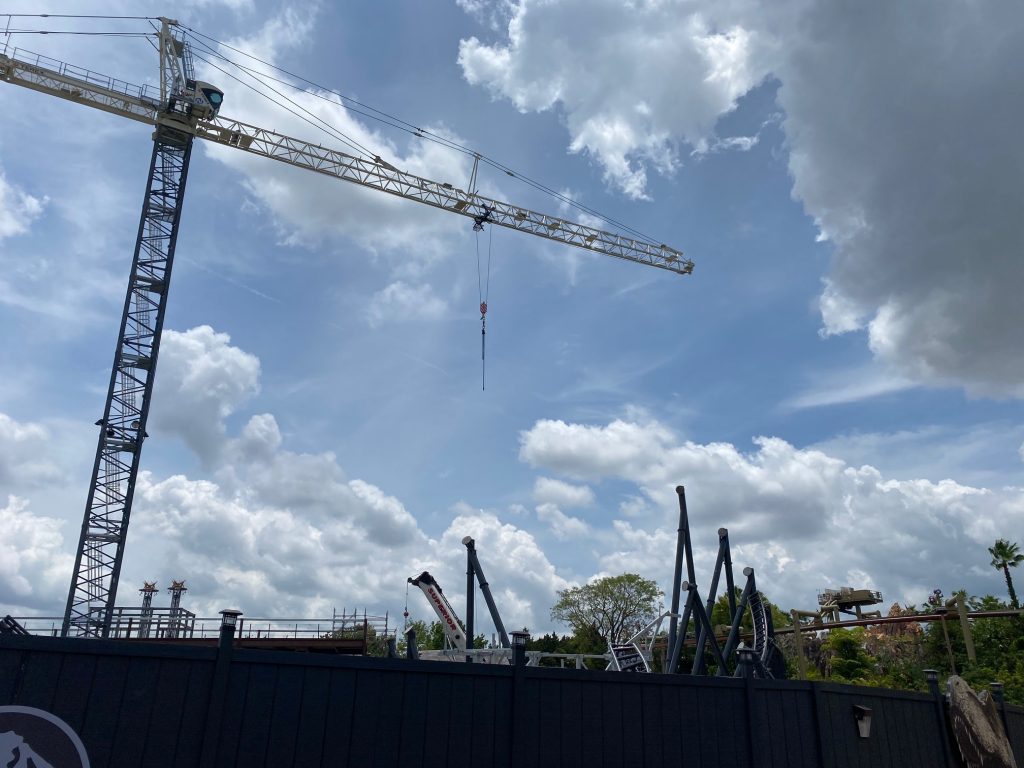 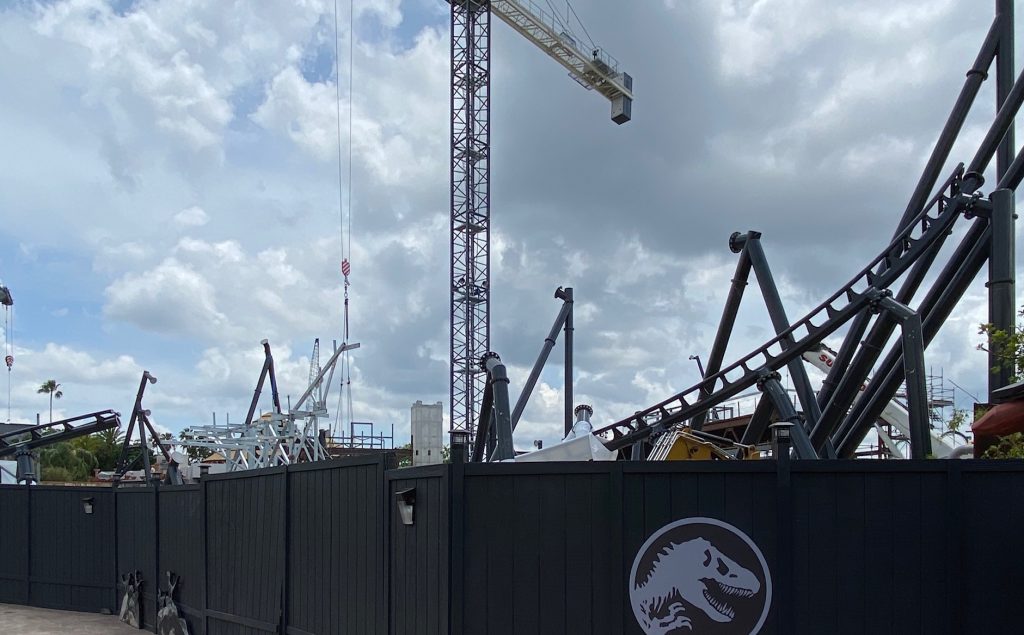 Before we close out this quick look from inside of Islands of Adventure, the biggest news of the week is that the new Raptor Encounter is now open! This newly constructed, and permanent meet and greet, is now located between the entrance to the River Adventure ride and the Pizza Predattoria restaurant. The temporary Raptor Encounter that was located on the right of the pizza restaurant has now closed. 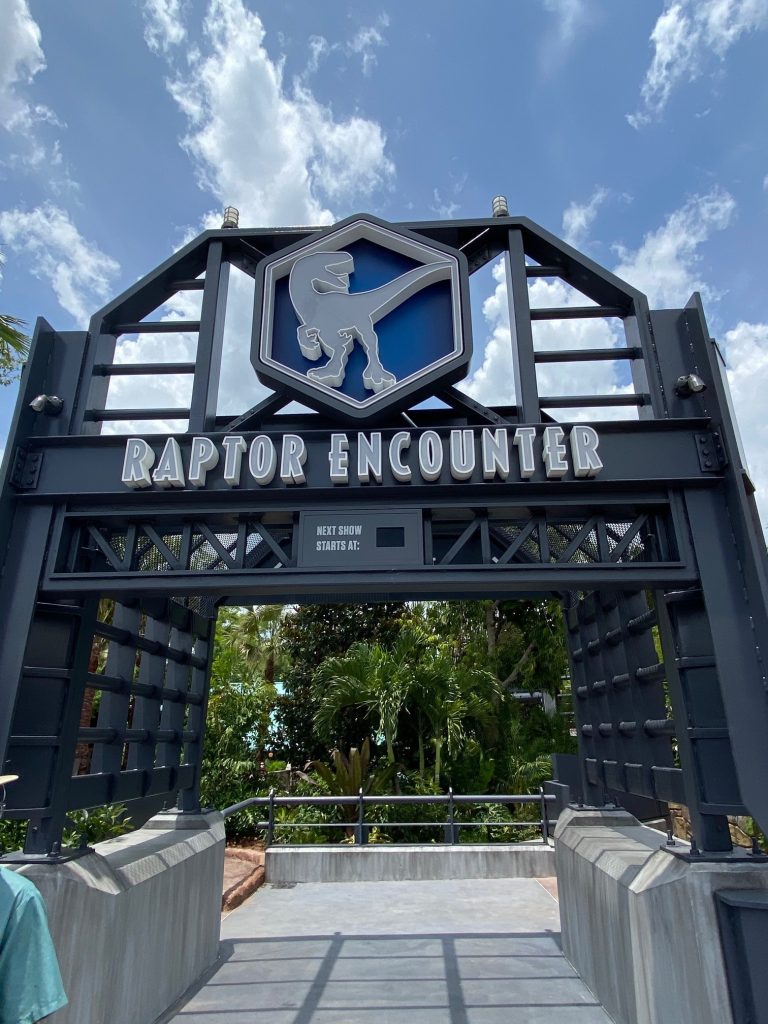 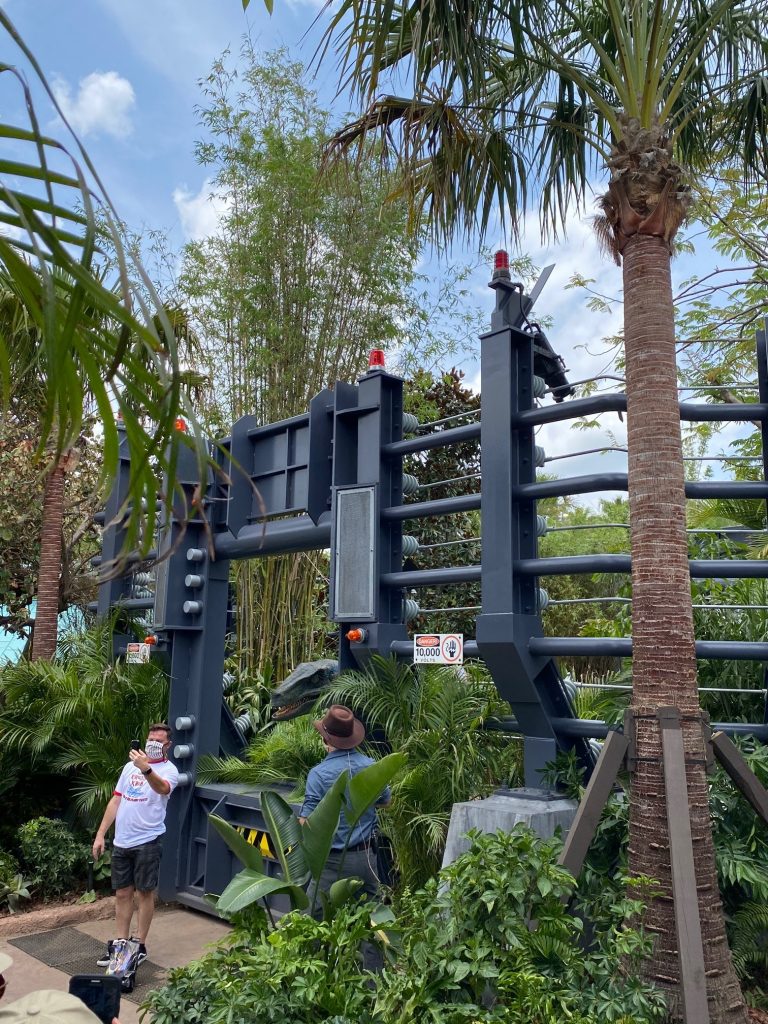 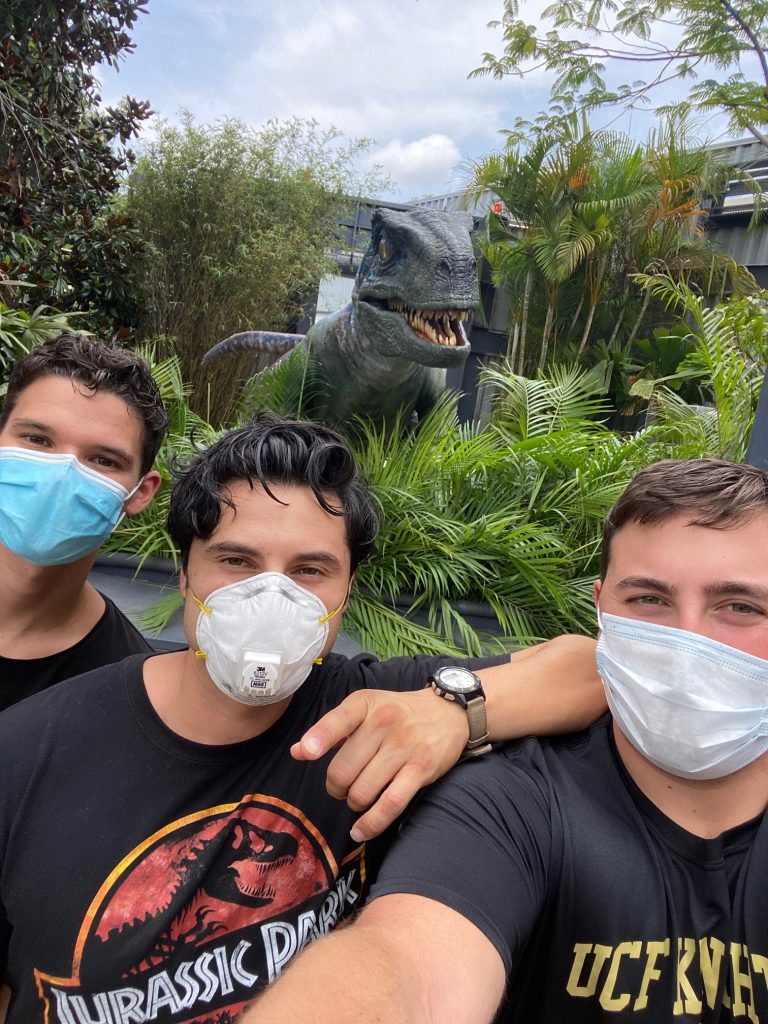 That’s all for this photo update! Thanks again to @WDW_413 for letting us share their pictures. You can see more photos from inside the Universal Orlando parks on his Twitter feed!

The Jurassic Coaster construction is expected to be completed by the spring of next year, and will hopefully open by the summer of 2021. Check out our previous update for more details on the theming and the track layout for this massive new project. And stay tuned as we dig even deeper in the coming weeks and months. Subscribe to our news feed or enter your email below to never miss an update!