With a brand new roller coaster being built in the Jurassic Park area of Universal’s Islands of Adventure, I thought it might be fun to look back at all of the planned and developed ride concepts that never came to be.

Some of these concepts were originally designed to be built in the expansion pads that were eventually used by Harry Potter and the Forbidden Journey and Skull Island: Reign of Kong—while another was a completely different vision of an attraction we eventually got. Here are 5 never-built rides for Jurassic Park at Universal Orlando. And be sure to check out the video for additional visuals. 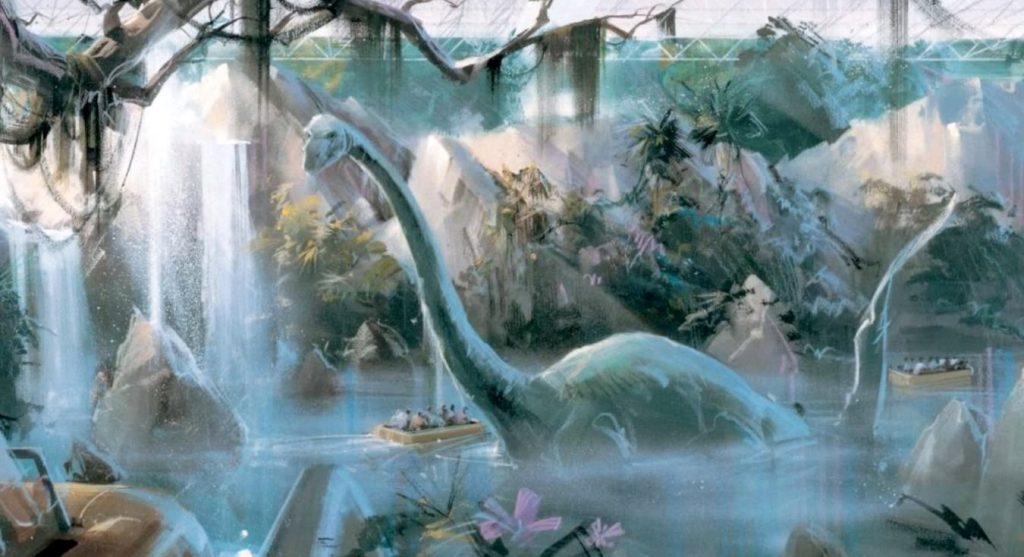 Early Concept Art for River Adventure with roof over outside scenes (Photo: ©Universal)

Our first attraction did eventually get built, but the original version was going to be quite different. Jurassic Park: The Ride was originally being designed to be built at Universal Studios Florida, where Men in Black: Alien Attack is now, at the back of the park. Development for the ride started very early, before the movie was even in production. Working from the script and the original novel by Michael Crichton, the ride was inspired by a segment from the book featuring an unfinished boat ride. This would’ve fit perfectly at the park, as Universal Studios Florida did not yet have a flume-type boat ride. 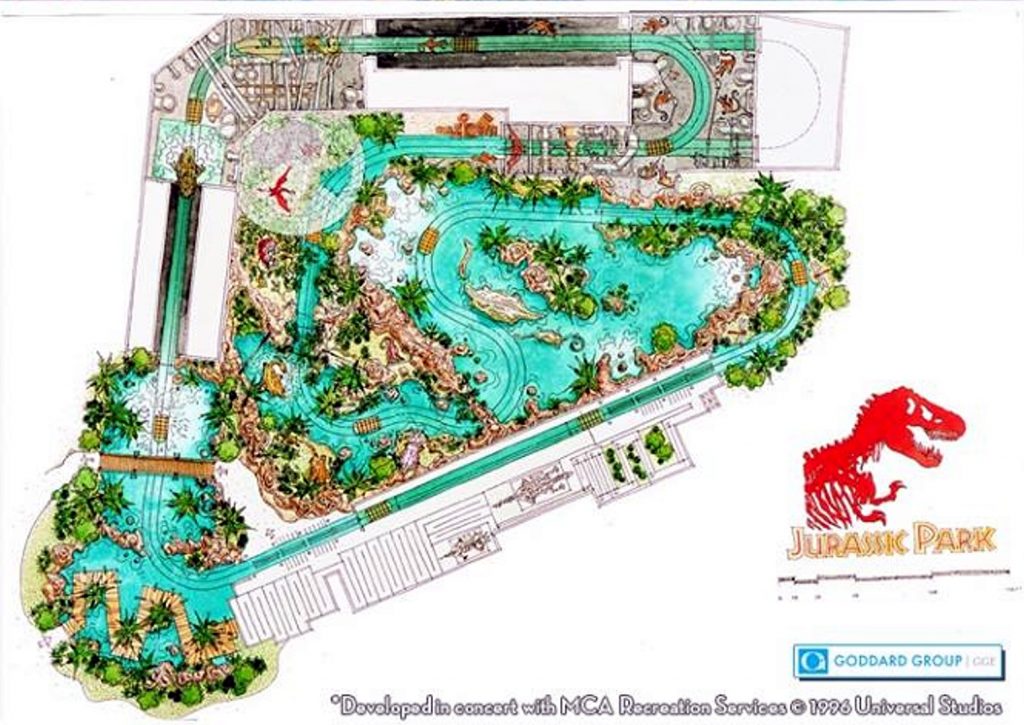 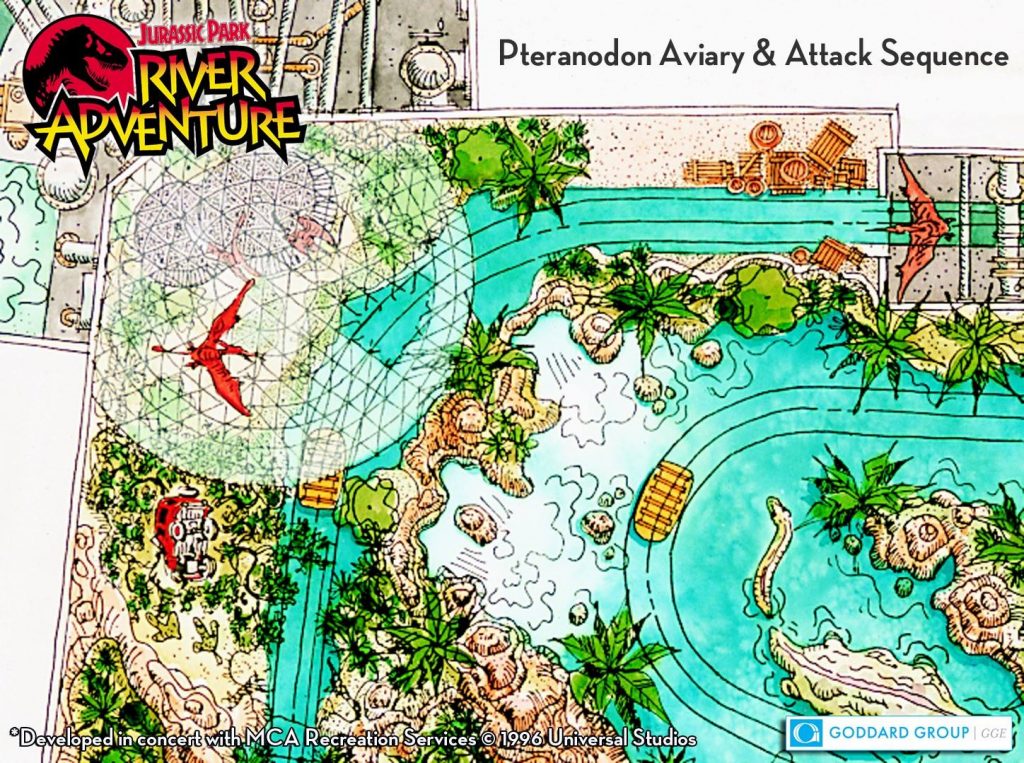 One of the first concepts for the attraction that was later abandoned, was for a roof to be placed over any of the outdoor scenes that would feature dinosaurs. This would not only allow the designers to better control the lighting, but would also help protect the animatronics from the harsh Florida elements. One of the outdoor sections that was tailor-made for a glass roof enclosure was the Pterodactyl Dome. This aviary scene in the original plans would’ve featured an escaped Pterodactyl over the boat, but the entire sequence was ultimately cut due to budgetary reasons. 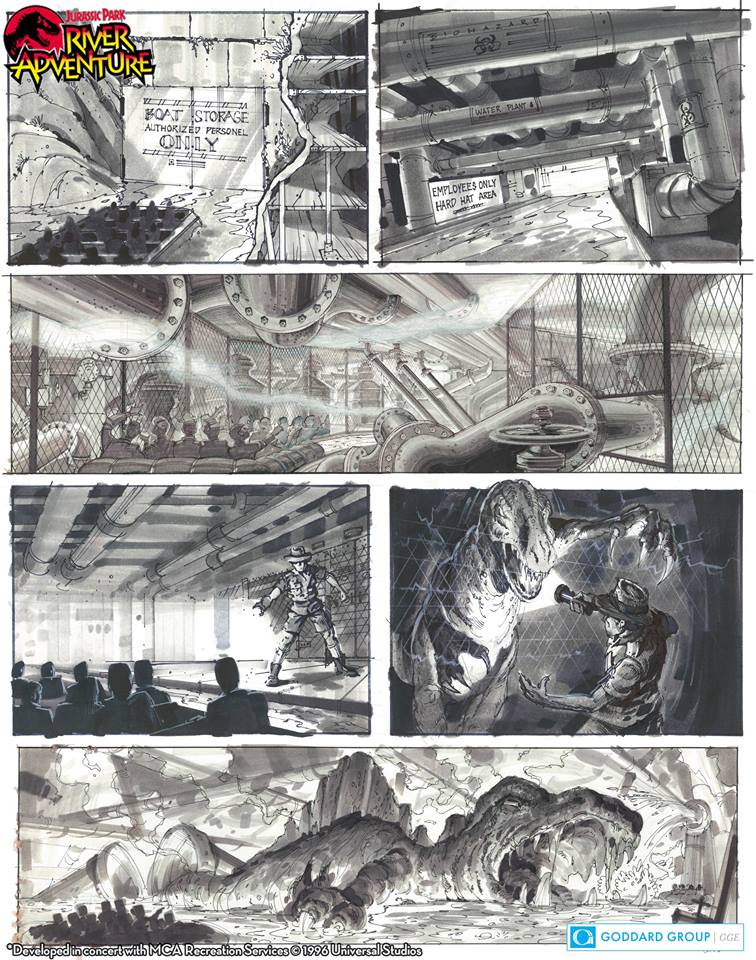 One of the biggest changes from the original ride concept would have involved a fake-out featuring a real Team Member. Just as it is now, our boat would be taken into a maintenance area, but then a voice over the P.A. system would tell us that we will be evacuated at the top of the hill. A nervous looking Jurassic Park employee would emerge carrying a flashlight, and guide you into a docking area. This role would be played by a real person, and not an animatronic. Suddenly, a raptor comes bursting through a chain link fence, causing the attendant to fall back. You would hear the sounds of more raptors behind you, as you start to drift backwards in the dark. Eventually this section was changed to the raptors charging the chain link fences we see on the ride today.

After a shake up for the plans for Universal Orlando’s new theme park, it was decided that the Jurassic Park ride would be better suited over there. Moving the ride to the new park, now called Islands of Adventure, would mean that the Jurassic Park ride would be opening later than originally expected in Orlando—but it also meant they would have more room to add additional experiences. 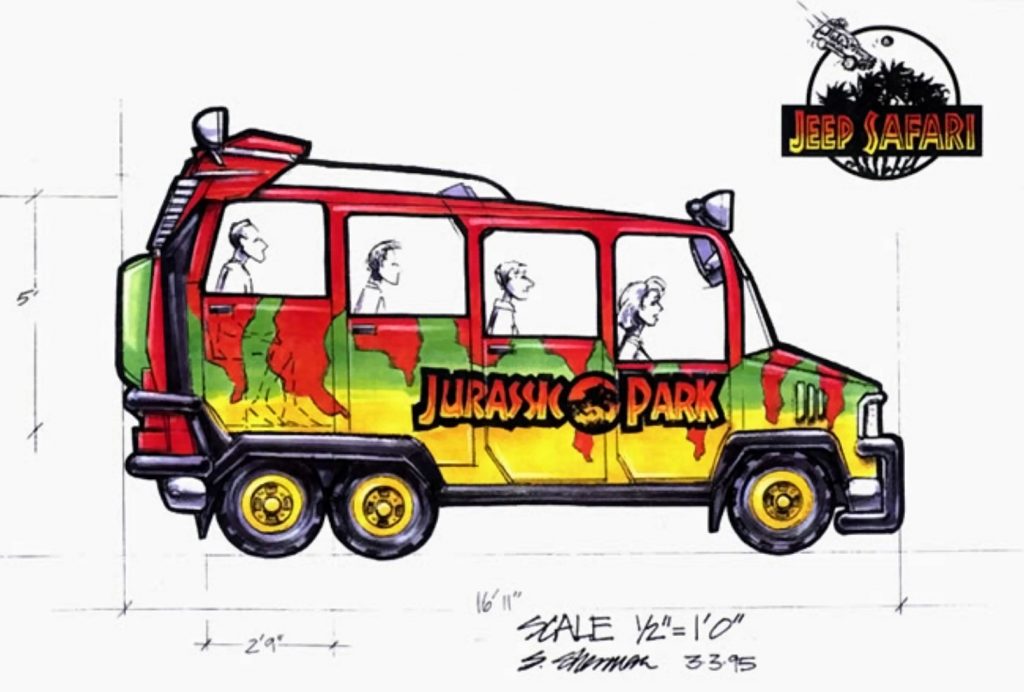 Before they even started desiging the River Adventure ride, Universal considered a concept for a Jeep ride inspired by the T-Rex paddock attack in the original Jurassic Park film. Since many of the same ideas were later utilized in the main River Adventure ride, the Jeep tour was cancelled… or at least shelved for a bit.

When it was decided that Jurassic Park would be getting an entire land at Universal Orlando’s new theme park in the late 1990s, they were looking for more attraction concepts to go along with the River Adventure. Designed to feature ride vehicles inspired by the electric Explorer tour vehicles in the film this ride would carry passengers through an outdoor section and into an indoor section as well.

After loading into the Jeep, riders would be taken through the iconic Jurassic Park gate, and then drive right below a massive brachiosaur. Other dinosaurs would be seen emerging from a lagoon. Not before long we would run into a dinosaur blocking our path, back our way up unknowingly into a raptor den in an indoor section of the ride. Here raptors would start climbing onto our vehicle before we make our escape only to come face to face with the T-Rex, who would then step on the roof of our jeep, just like in the movie.

Had this attraction been built, it would have been located behind the Thunder Falls Terrace restaurant, where Skull Island: Reign of Kong was eventually built. Rumor has it the Jeep Safari ride never saw the light of day because in the end, it was just too similar to the River Adventure ride, covering many of the same story beats. Another ride was also in development around the same time though, and it would have been completely different. 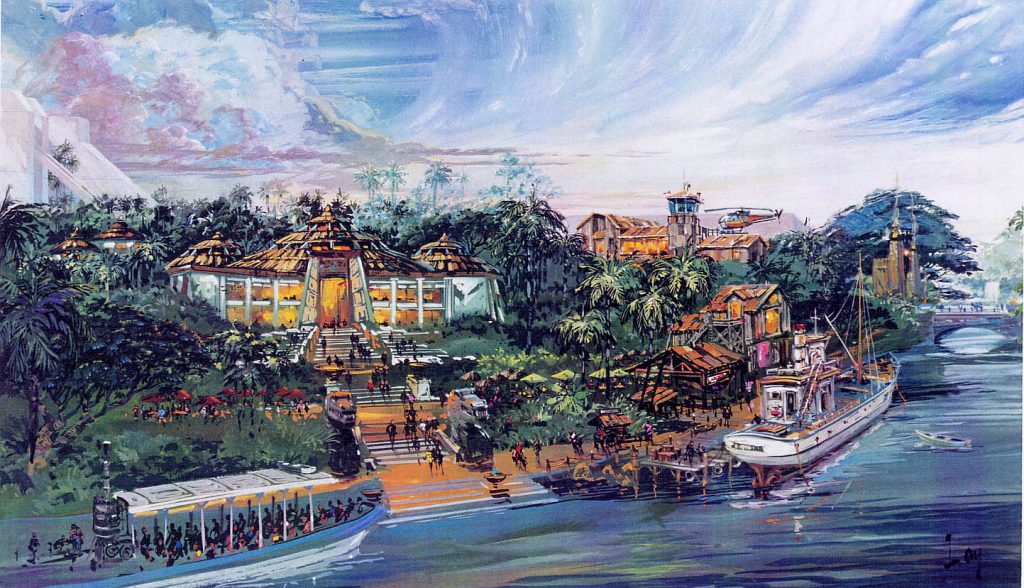 This attraction made it far enough through development that it could still be seen in the model and concept art for Islands of Adventure the year it opened. With a tower and a helicopter on its roof, this attraction was going to be a simulator ride that would take guests on a flight over Jurassic Park.

Not much is known about the story for the attraction, but it is often said that it would feature an aerial flight over the dinosaur paddocks of Jurassic Park. The ride would also feature an attack by a group of Pteranodons. 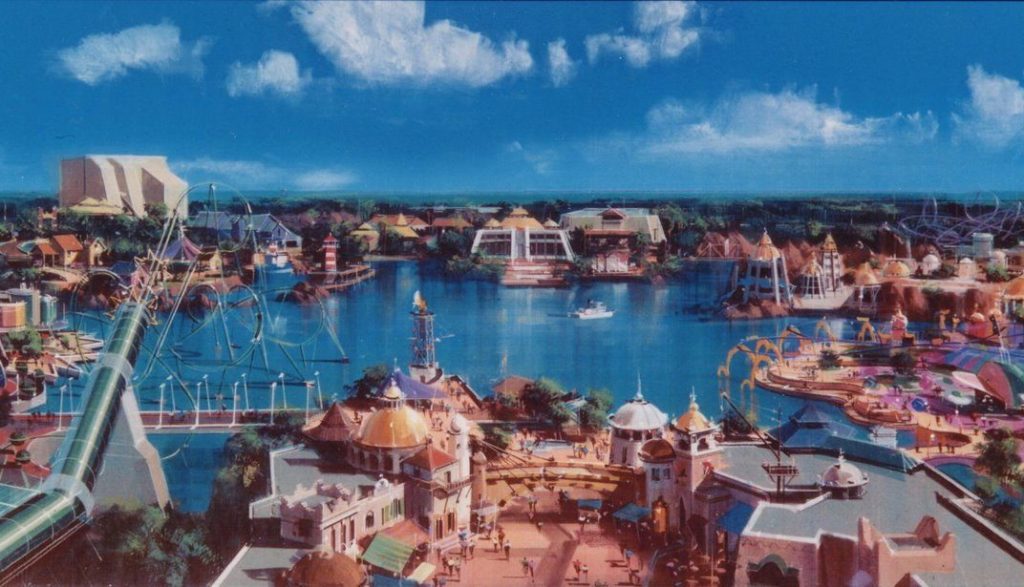 The concept for the ride system is said to have been strikingly similar to the ride system in use for Soarin’ at Disney Parks. Instead of a closed cabin ride system like Star Tours, or even multiple motion base mounted ride vehicles that share a screen like Back to the Future, HelicopTours was going to use a suspended theater ride system—and had it not been cancelled, it would’ve opened a couple years before Soarin’.

The location for this attraction would have been to the right of the River Adventure. The expansion plot remained empty for years until it was eventually taken over by The Wizarding World of Harry Potter. Despite Forbidden Journey being built in its spot now, you can still find the HelicopTours on the model of the Jurassic Park island, located in front of the entrance to the River Adventure. The Jeep Safari ride can also be found on the model, even though it too was never built. 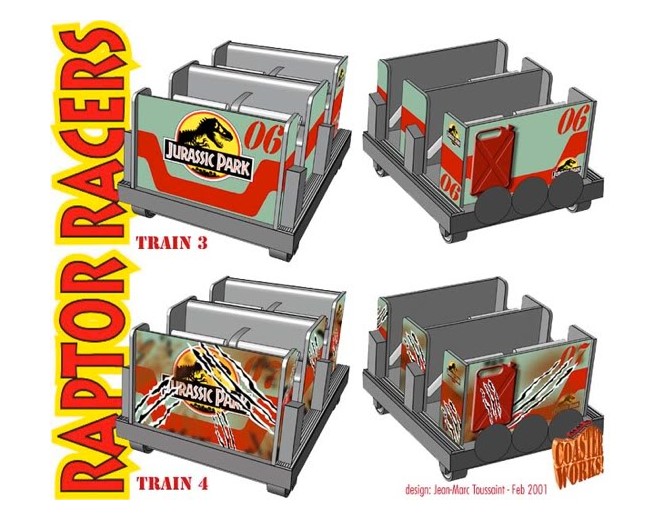 Designed in early 2001, this concept was not part of the original plans for Islands of Adventure, but Universal was supposedly looking to add a bit of thrill to the land after the park had been open for a couple years. Designed by The Coaster Works, Raptor Racers was going to be a wooden roller coaster. Partly inspired by the famous Cyclone Racer in Long Beach, the track for this coaster was reportedly going to be shaped like a dinosaur skeleton.

The Coaster trains would be painted to match the look of the Explorers and the Jeeps from the original film. During the ride we would encounter a group of raptors, and be chased by them into a dark-ride portion that would have involved some sort of track movement or vibration to simulate the danger. 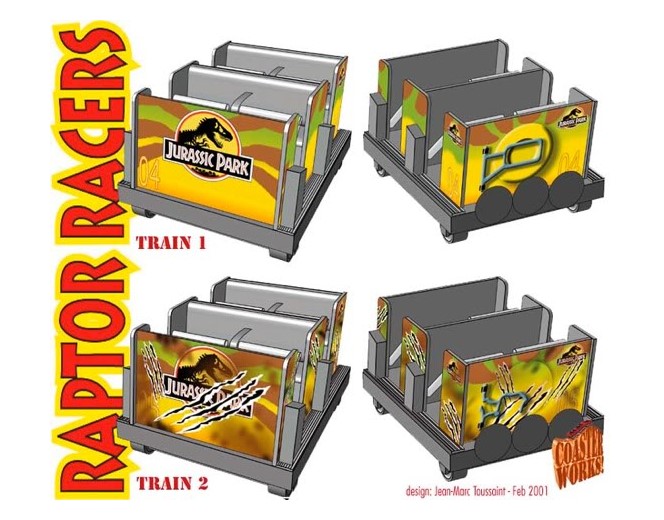 Concept art shows both versions of trains, with and without dino damage (Photo: ©Coaster Works)

One of the most interesting aspects for this attraction concept involved a neat effect when getting off the ride. When pulling back into the station, special U.V. lighting would reveal raptor claw marks and damage to our coaster trains. This concept was never approved by Universal, but was shopped around to other parks.

Universal was still looking to add something thrilling to this section of the park, and later that year they finally settled on a concept that would fit the bill. 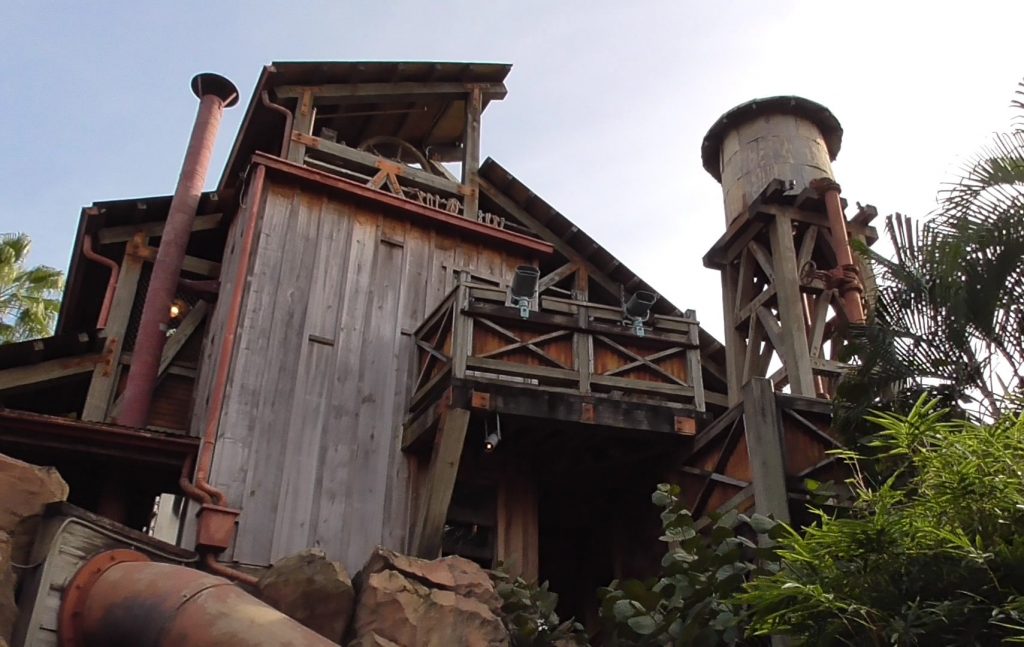 Deciding to go even bigger, Universal was considering adding a hyper coaster to the land. It would have gone where Skull Island; Reign of Kong is now, extending out over the pathway, and even taking over some of the Team Member area behind Camp Jurassic. Being a hyper coaster, this attraction would’ve reached over 200 feet tall at its tallest point, nearly twice as tall as The Incredible Hulk Coaster. 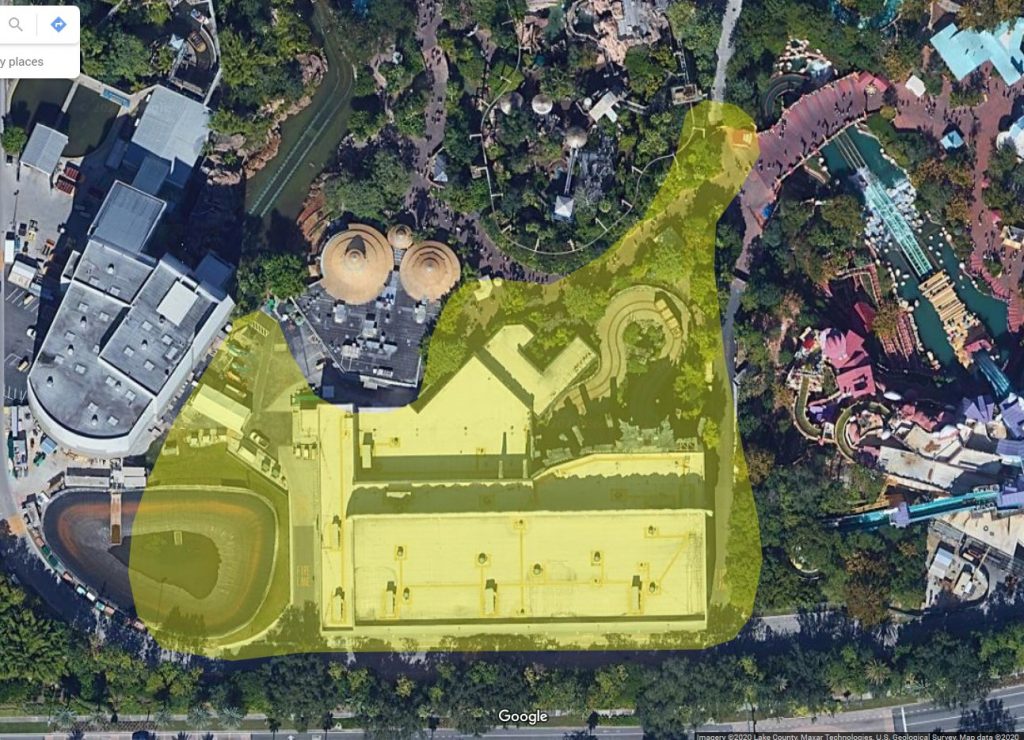 This hyper coaster was to be built where Skull Island: Reign of Kong is now

Unlike Raptor Racers, this roller coaster was supposedly approved and was being designed by mid 2001. Surrounded by electric fences, the area would’ve been themed like an Amber Mining facility. A mix of mountains reminiscent of Big Thunder Mountain, mixed with theming elements you could already find within Camp Jurassic, this massive roller coaster would climb a chain lift hill and dive down the mountain, and swoop around waterfalls.

We would presumably be traveling along track meant for mining purposes, in and around the amber mines. Not much is known about this concept, other than the fact that it was cancelled before work had even started, likely due to the drop in tourism after the events of 9/11. 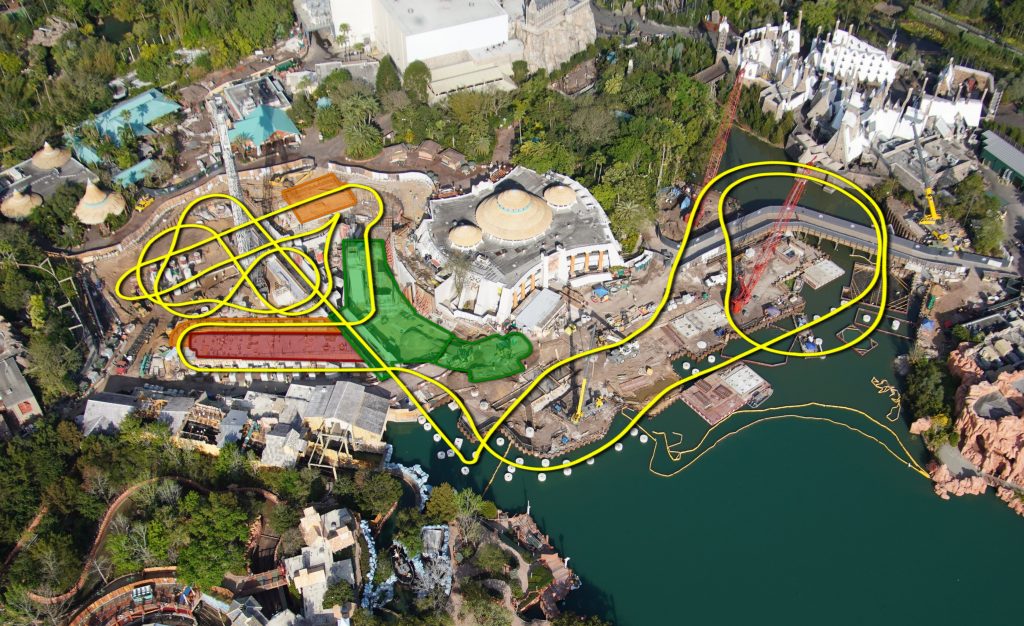 Nearly two decades later, and it looks like Universal is finally getting their new thrill coaster for Jurassic Park. Using newer technology, like launches instead of a chain lift, the new coaster is taking over the old Triceratops Encounter area, as well as a section of the park’s lagoon. Just like several of the never-built concepts of the past, this new attraction is rumored to feature a group of velociraptors—proving the old adage true, that no idea is really dead when it comes to the theme parks.

Be sure to check out our continuing coverage of the new roller coaster by clicking here, and leave a comment with any other never-built attractions you’d like to learn more about. And be sure to subscribe to the news feed or enter your email address below to never miss an update.