The new Wizarding World land in Epic Universe may include TWO Ministries of Magic.

Universal Orlando is building a new theme park a couple miles south of the current resort. Epic Universe is expected to open with four themed lands including Super Nintendo World and a new land based on locations from the Wizarding World.

While we here at Park Stop have been saying for awhile that the land would be based on locations from the Fantastic Beasts film series, including the French Ministry, a new rumor has popped up saying that plans have changed and the land will feature the British Ministry of Magic instead. It turns out that both things may be true.

On the latest episode of the ParkStop Podcast we discussed the possibility of the Fantastic Beasts land for Epic Universe being redesigned as something else. I have since learned that these rumors are not true. The plans, as far as I can tell, have not changed one bit in recent months.

HOWEVER, and this is a big HOWEVER, there appears to be more to this land than we had originally thought. While it is not clear if the name for the new Wizarding World land at Epic Universe will include the words “Fantastic Beasts,” it is clear that (at least some of) the area will indeed be themed as locations from the film series as we suspected.

It appears the massive attraction on the left side of the land will be based on the British Ministry of Magic. And the crazy thing is, it looks like it always was!

No last minute decisions here, at least as far as the British Ministry of Magic is concerned. It seems like this attraction has always been built into the plans, (we just missed it until now). As for the attraction on the right and the streets leading into the land, those seem to be based on Paris and the French Ministry from the second Fantastic Beasts film, just as we’ve discussed prior. 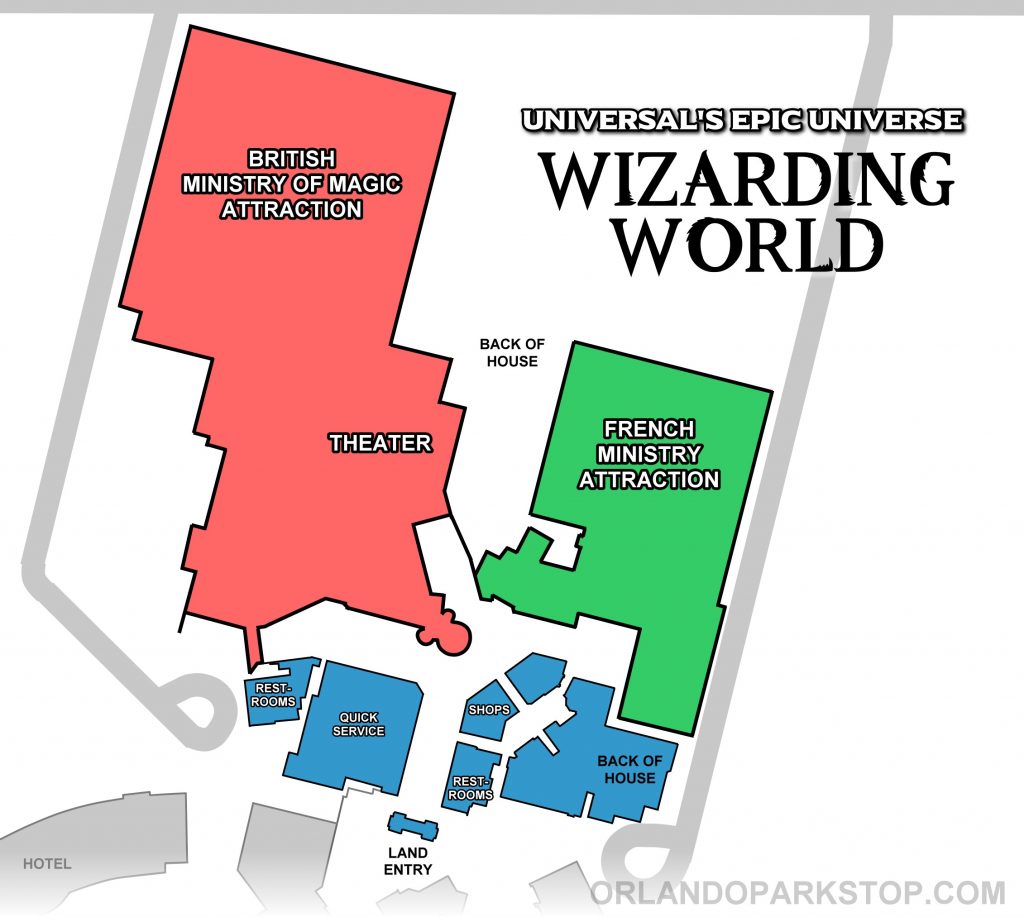 The image above shows the approximate size and locations for the main structures in this land at Epic Universe. I’ve highlighted and labeled the various structures to the best of my knowledge. The red area will contain the British Ministry, what I believe might be a theater attraction, and at least one interior street area. The green area will be the French Ministry. And the blue areas may be themed as outdoor Parisian streets with shops and some dining.

The theater attraction remains a mystery as of now, as do the ride systems for the other two attractions. I am confident in a few new details about the British Ministry of Magic attraction at this time though. It looks like we will be entering the Ministry through a series of Floo network fireplaces, emerging on the other side inside of the Ministry’s grand hallway of fireplaces. Making our way down the hall we will enter a large atrium, likely where the wizard statues and fountain can be seen in the films. (No idea when in time this land will take place, but I would guess it would be at a point where these statues are present.) 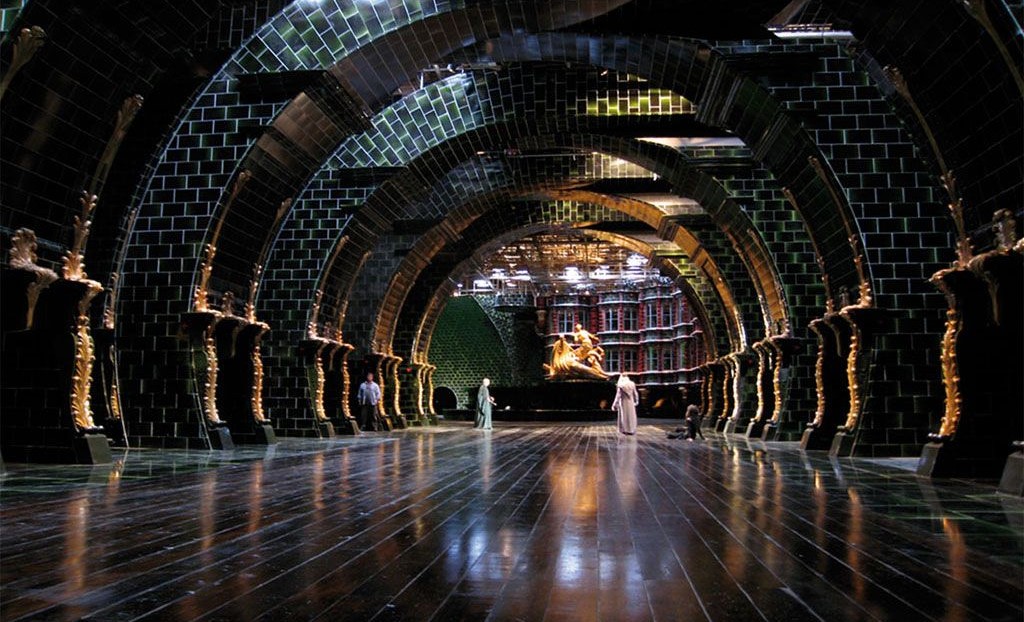 Inside the atrium will be the ride’s entrance on the left and its exit on the right. To exit the Ministry you can go back to the fireplaces, but use the ones on the opposite wall from where you entered. It’s not clear what you exit out of, but they could be themed as a row of phone booths on the outside—or probably just more fireplaces. A neat design detail of this hall and atrium, is that guests will constantly be traveling in both directions, heading towards or away from the ride, which would make it look like a bustling Ministry filled with people coming and going, just like in the films!

The entry and exit to the British Ministry looks to be contained within the large show building (red in the map image above,) even though you may be walking through what might appear to be an outside street to get to the attraction. Perhaps there may be some sort of magic trickery in play, such as a Portkey, to get us from France to London as we enter the large showbuilding. Then you can choose to go into the theater in one direction or towards the Ministry in another. Or, alternately the theater could also be a part of France, and the Floo network takes us all the way from France to England only when we enter the British Ministry through a fireplace specifically. 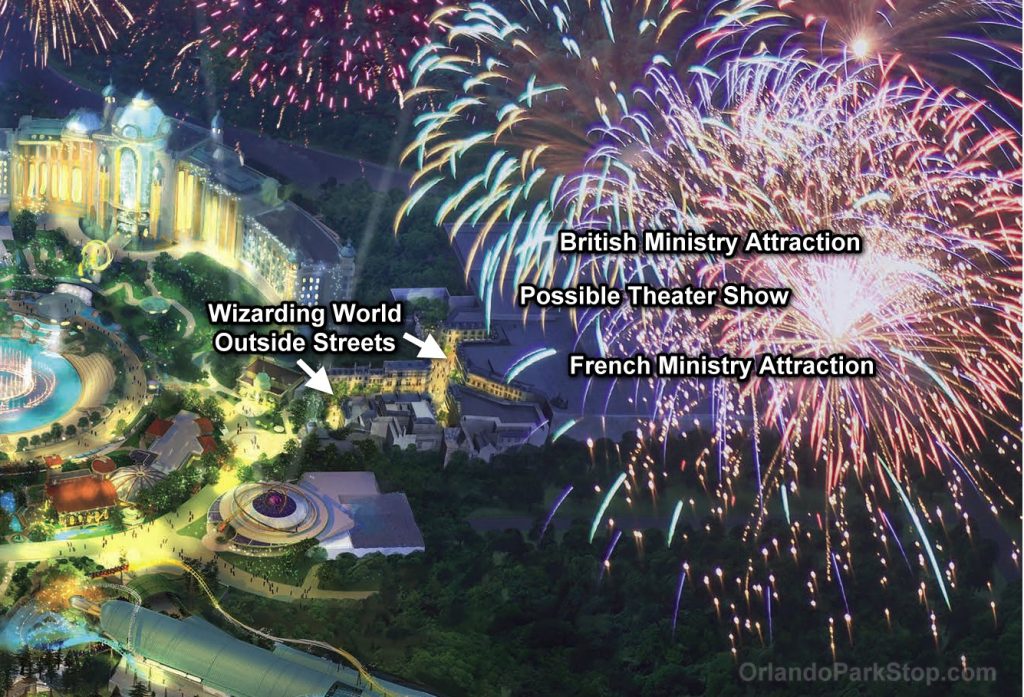 It should be noted that the British Ministry of Magic appears in both the new Fantastic Beasts film series, as well as the classic Harry Potter books and films. By including this particular location at the new park it could be a great way to satisfy fans of either series. After all, this is one of the more iconic locations from the original series that has yet to be recreated at Universal theme parks. No rumors yet for what types of stories or characters will be involved in any of these attractions. For that, we’ll just have to wait and see.

Universal’s Epic Universe is still under construction in Orlando, but during a recent earnings call with investors executives said that there will be a delay in construction. The park is currently expected to be ready in 2024, but things could always change as time moves on.

Be sure to subscribe to the news feed or enter your email address below to never miss an update. You can see our previous Epic Universe updates here. Epic Universe concept art: Universal Orlando | Film screenshots: Warner Bros. | Graphics by Alicia Stella