While Universal Orlando has remained tight-lipped about the prospect of a new theme park being built on the 1000 acres of land recently acquired south of the current property, some news of a possible name for the unannounced park has turned up. From recent trademark filings, as well as a survey sent to folks by email, we’re getting our first look at what this new park could be called.

“Fantastic Worlds” was recently trademarked by Universal City Studios, for use in theme park services, attractions and areas. The new theme park, currently in development (4th gate for the resort after Universal Studios Florida, Islands of Adventure and Volcano Bay) is rumored to be filled with highly-themed lands based on popular properties. One could easily call it a park made up of Fantastic Worlds. The name also showed up in a guest survey about possible park names. See more details about all of the possible names, plus more rumors for the new theme park below. 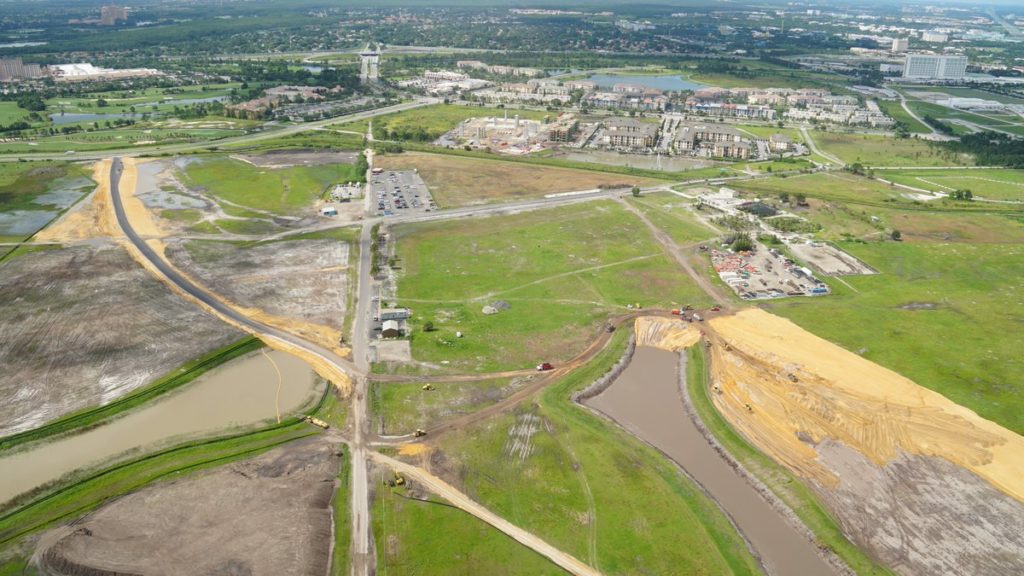 Over the last few years Universal Orlando has been reacquiring around 1000 acres of land, (most of which was originally owned by the company, but sold off nearly two decades ago by the resort’s prior owners). While details on their plans for the new land are scarce, Universal has submitted water drainage plans with the city for the grading of more than 200 acres of the land. The plans show retention ponds being relocated among other changes. More importantly, they illustrate that the company plans to act immediately on the land.

The trademark for “Fantastic Worlds” was filed by Universal just last month, on June 8, 2018. At the time, some of us that have been following rumors for the new land assumed it was certainly a contender for a new theme park’s name. Without any further evidence however, we could not be sure. That is, until a survey Universal sent out by email was reported to contain the term as a possible name for the new park. 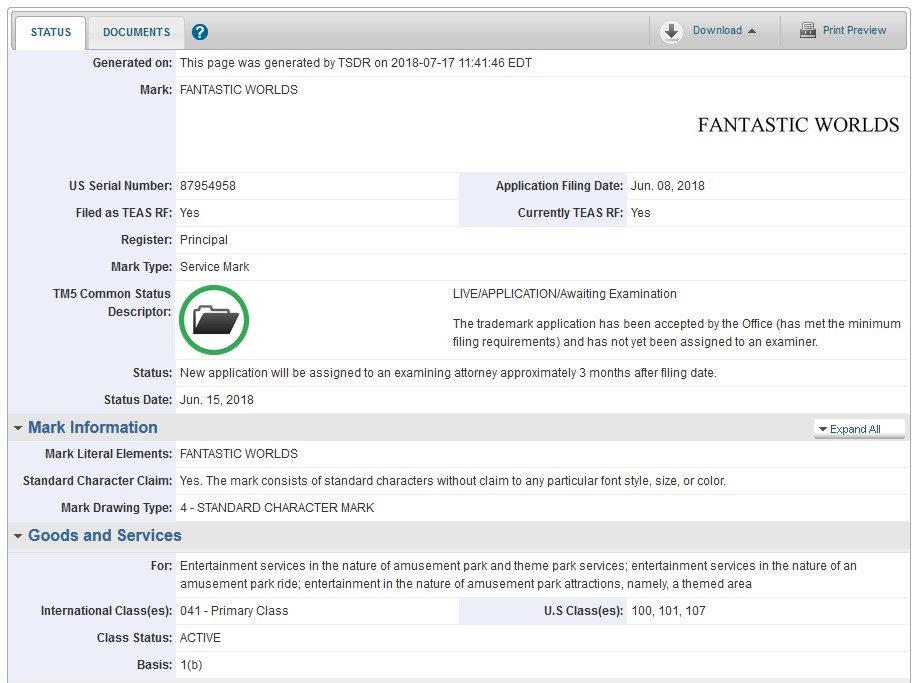 Basic details for the new trademark for ‘Fantastic Worlds’ filed by Universal – Image: US Trademark Office

This puts “Fantastic Worlds” clearly in the running for a new theme park name, (and not just a ride or land within a park as the trademark may suggest.) But it also offers up some other interesting options for a park name. Since the new theme park is rumored to be similar in nature to Universal’s Islands of Adventure, (a park made up of highly-themed immersive lands,) pretty much all of these names are fitting choices. 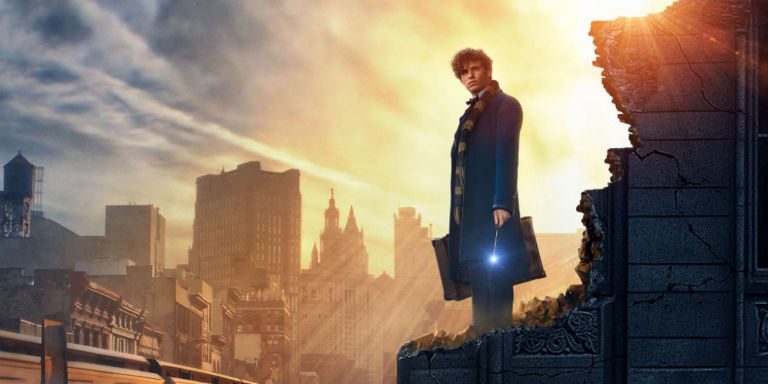 With the success of the Wizarding World in the other parks, it makes business sense to bring more of J.K. Rowling’s worlds to the new park – Image: Warner Bros

Given some of the rumored properties for a new park, it’s interesting how many of these names are reminiscent of said properties. Fantastic Beasts and Where to Find Them, for example, is one of the concepts rumored for the new park – and Fantastic Worlds covers that quite well. DreamPark could be meant to conjure up thoughts of DreamWorks, which should have a heavy presence in the new park (with properties like Trolls, How to Train Your Dragon and more rumored to be included).

Diving even deeper, Legendary Lands, Legendary Worlds and Epic Worlds sound like they could include the classic stories of Middle Earth from The Lord of the Rings. And I can’t help but notice that the word “World” appears in many of the options currently on the table. With properties like Jurassic World, Wizarding World and even Super Nintendo World at their disposal, it isn’t too surprising. 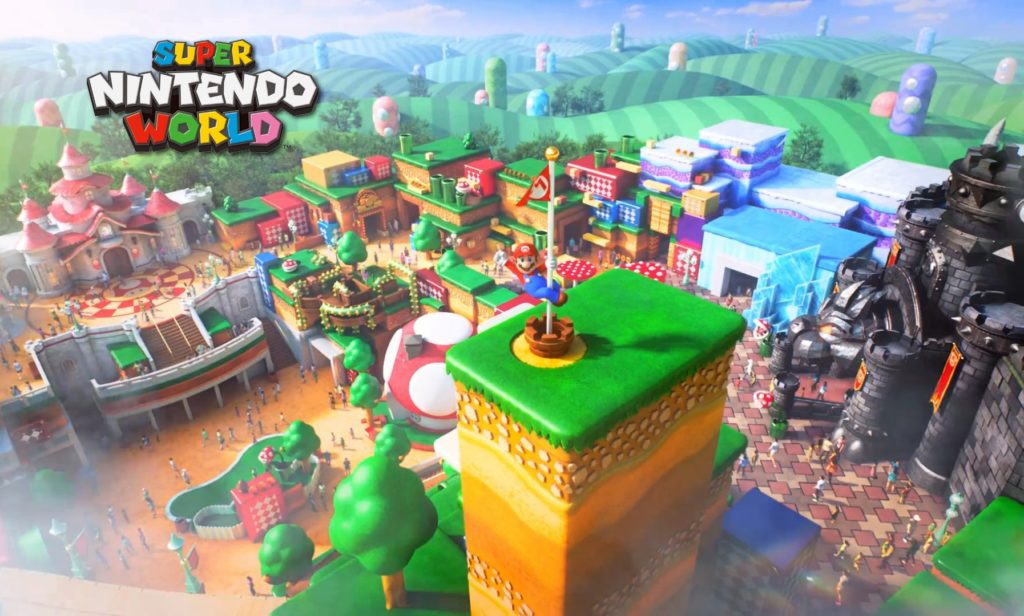 A new park for the Universal Orlando Resort could be ready as early as 2021, according to some insiders, just in time to compete with Walt Disney World’s 50th anniversary celebration. Currently, land is being cleared for warehouses and support buildings that will aid workers during construction. A new road was also recently paved on the land, which will be used to bring in heavy equipment for the project. Stay tuned for more news and rumors about this exciting addition to the resort!

Stay tuned for more theme park news and rumors. Subscribe to the news feed or enter your email below to never miss an update.