It appears that the layout for Mickey & Minnie’s Runaway Railway, the new ride replacing The Great Movie Ride at Disney’s Hollywood Studios in 2020, (and coming to Disneyland Park in 2022,) have leaked online.

Posted by the infamous Twitter account @BackDoorDisney, (reportedly now run by someone other than original owner,) the image appears to show the layout for this new trackless dark ride. Check out the image below, as well as a scene by scene breakdown for what we might expect during this new attraction.

The leaked image features a scene by scene layout of the entire attraction. The Twitter account that posted the image claims that they found it online, so it is already public. Other news outlets are reporting on this leaked image as well, but no one has yet to find the reported “original” source as of the time of this writing.

The scenes listed on the leaked image seem to line up exactly with what was originally reported all the way back in November of 2017 by WDW News Today. I suggest that anyone that would like to hear even more detailed information about every scene check out that report. 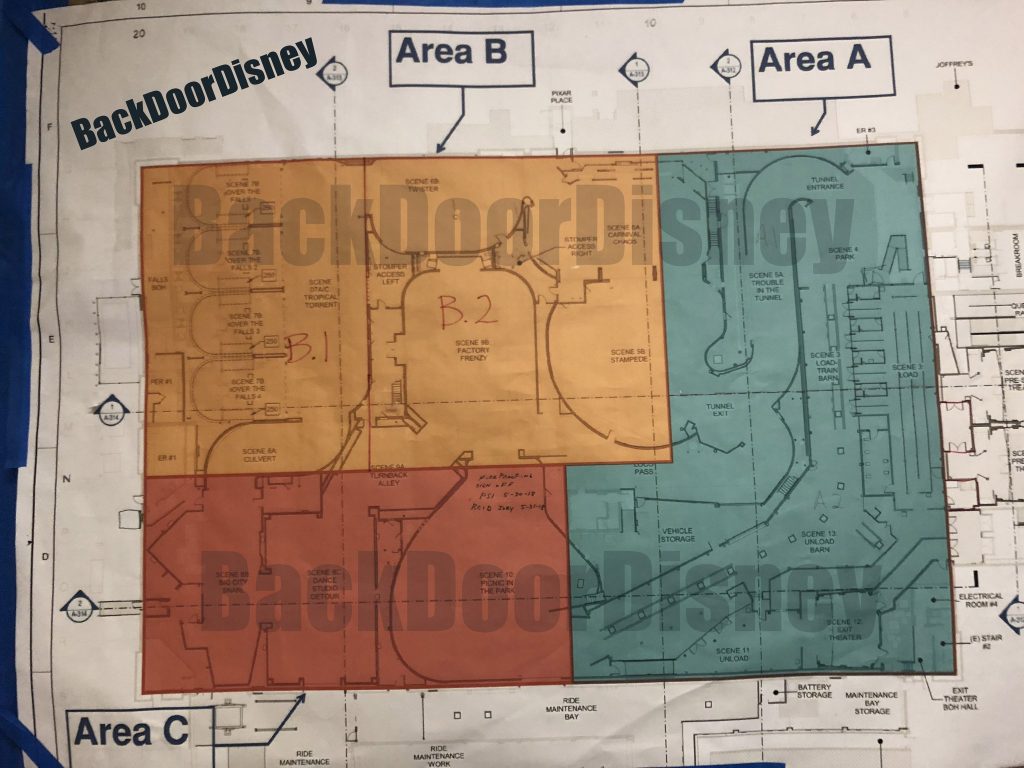 Here are the scenes as listed in the leaked image:

Some interesting things of note we can learn from the image include how the cars will indeed separate as has been rumored. While we will board the ride as if it were several train cars connected together, somewhere between the train tunnel and the stampede scenes we will lose Goofy driving the train engine. Then our train cars will all “disconnect” as well, probably in the Twister scene.

Scene 7 has all four cars completely separate for their own journey over the falls. Afterwards our separated cars will reportedly dance around each other, similar to other trackless rides like Pooh’s Hunny Hunt in Tokyo Disneyland, before coming back together for the Picnic in the Park finale before unload.

See the 2017 WDWNT story for more rumored story details. Disney says the new ride will feature an original story and all-new lovable theme song, It will use state-of-the-art technologies and dazzling visual effects to transform the cartoon world into an incredible and immersive multi-dimensional experience.

Mickey & Minnie’s Runaway Railway is planned to open at Disney’s Hollywood Studios in spring 2020. For help booking your next vacation to the Walt Disney World Resort, request your free vacation quote from Elizabeth, our vacation planning partner over at Destinations in Florida. She can help you book the best on-site room for your stay, as well as ticket packages and even dining for your whole trip — and the best part is, her services are free to you!

Stay tuned for more details on this new ride! Subscribe to the news feed or enter your email below to never miss an update. Leaked Image: @BackDoorDisney / Official Images: Disney