Mickey & Minnie’s Runaway Railway is scheduled to open at Disney’s Hollywood Studios on March 4, 2020. It is replacing The Great Movie Ride, which closed back in 2017. The new attraction is also slated to open at Disneyland Park in 2022.

The new ride promises to put guests into the zany animated antics of the new Mickey Mouse shorts, and it will accomplish it through clever new technologies and trackless ride vehicles. Imagineer Kevin Rafferty says “What I can promise you with Mickey and Minnie’s Runaway Railway, is the thing that you can expect, is the unexpected. There’s a surprise around every corner.”

Let’s go over everything we think we know about this highly anticipated new attraction, including what the queue and preshows may be like within the Chinese Theater, and what we can expect to see in each scene on the ride. 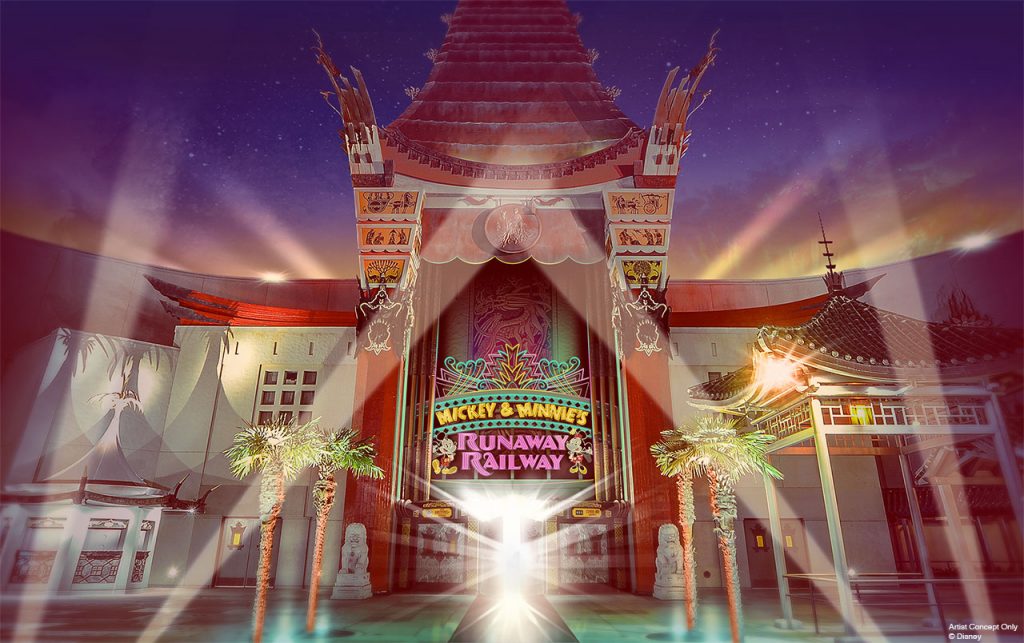 The former facade for The Great Movie Ride, featuring the park’s recreation of the Chinese Theater in Hollywood is remaining (mostly) intact. Instead of displaying neon signs on both of the wings, Runaway Railway’s large, animated neon marquee will be placed directly above the front doors.

The exterior queue has been refurbished, but remains mostly the same in appearance. Additional queue stanchion holes have been added into the pavement to extend the exterior queue even further out, adding switchbacks from the covered queue area all the way to the wall that separates the area from One Man’s Dream. 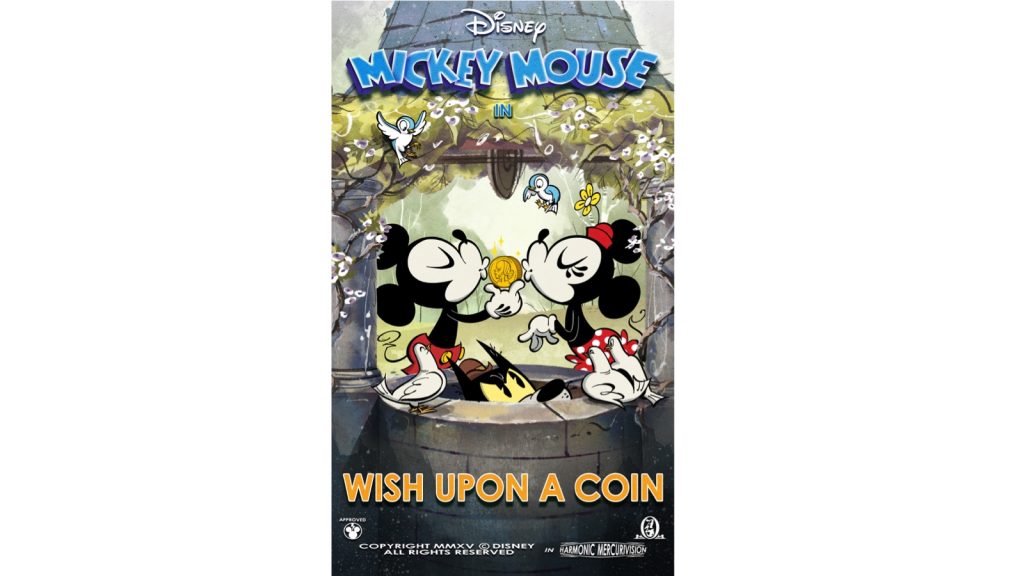 One of the new movie posters seen in the queue (Image: Disney)

The Chinese Theater lobby has remained intact, including the screen-based movie poster frames, but now with new posters for existing Mickey Mouse shorts displayed on them instead of classic films. Christopher Willis, who is the composer for the Mickey shorts, has created background loops for the queue made up of his favorite themes from the cartoons, but with a classic Hollywood feel. 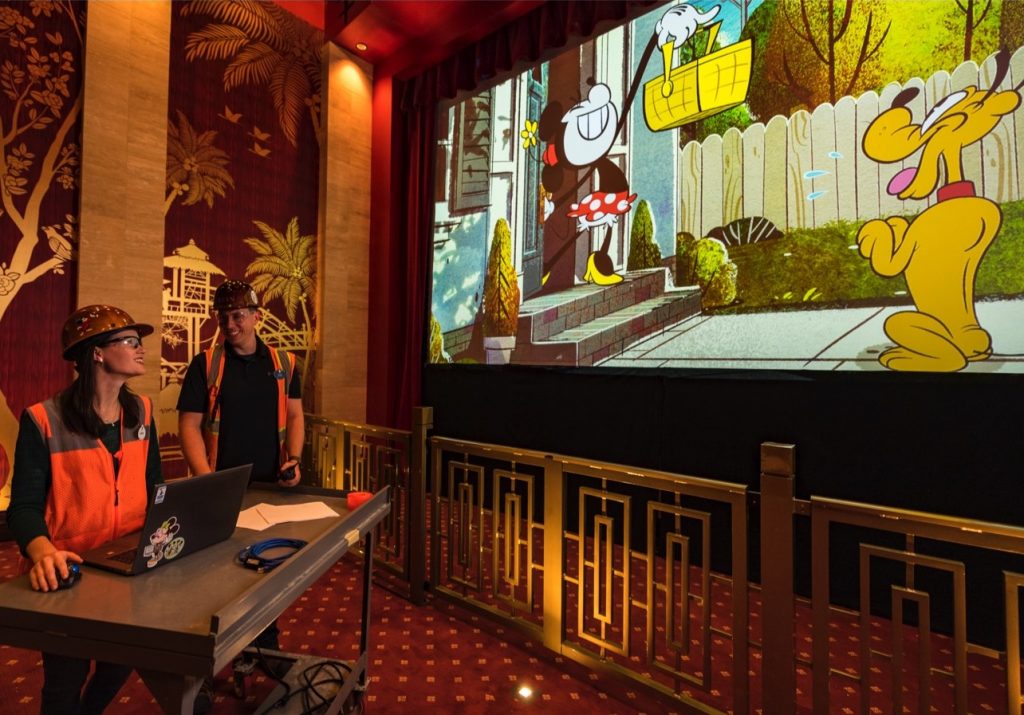 The former large theater area with the last section of queue for The Great Movie Ride, (where they showed classic film clips) has been transformed into two identical theater preshow spaces. The Chinese Theater decor has remained for the Walt Disney World version of this new attraction.

We’re here today for the world premiere of the new Mickey short entitled “Perfect Picnic.” We’re sent to one of the two identical preshow theaters. The cartoon begins to play on the screen, with scenes featuring Mickey, Minnie, Pluto and Goofy. Then, the theater is consumed in special effects that somehow blow a hole right in the middle of the movie screen. Next thing you know, after the smoke starts to clear, we find ourselves walking straight into the cartoon world.

We enter a load area inside the cartoon, set inside of a train barn. That’s when we board one of four train cars, with Goofy at the helm in the locomotive engine at the front. Now we’re inside of the “Perfect Picnic” film, and ready to join Mickey and Minnie as they hunt for that perfect picnic spot. 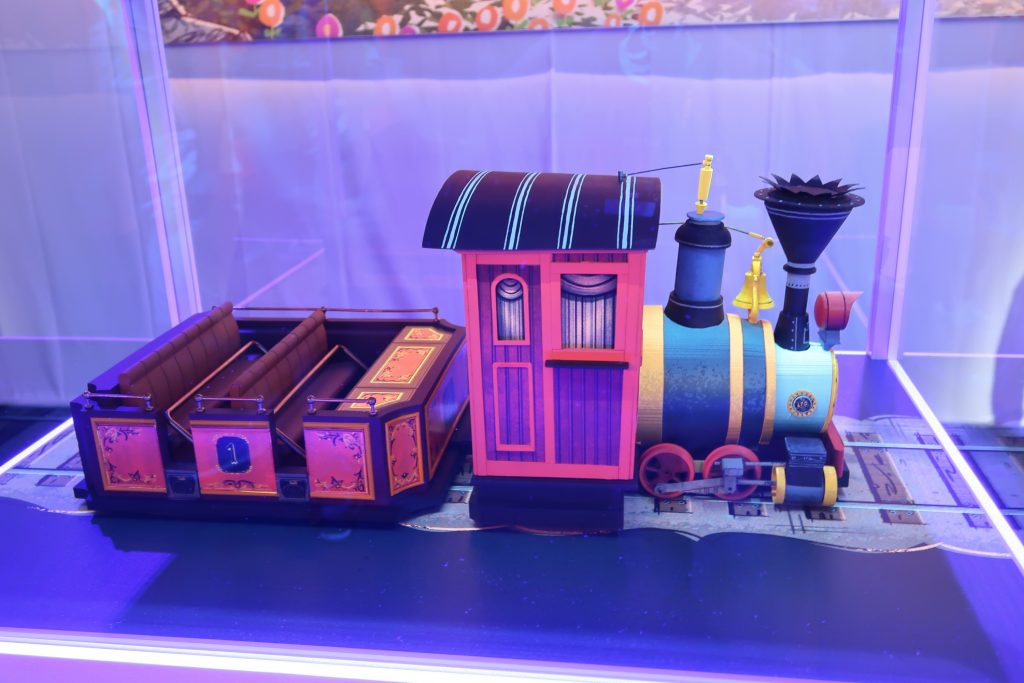 Model of one of the ride vehicles and Goofy’s train engine (Image: WDW Theme Parks)

The ride itself will utilize trackless ride vehicles. They are expected to work similarly as the ones on the Ratatouille ride, or the recently opened Rise of the Resistance attraction. The ride vehicles can move in any direction—and in at least one scene, are expected to park into a basic motion base platform for even more movement. There are four ride vehicles traveling together throughout the attraction, with Goofy “pulling” us in his train engine ahead.

To make it feel like we are really inside of a cartoon, Disney has created what they are calling 2.5-D. As opposed to 3D which requires glasses to create the illusion of depth for flat projections, this technology will have projections mapped onto blank physical objects. This is intended to make it feel like we are traveling through a flat cartoon world, but in a three-dimensional way.

One of the upsides for the 2.5-D technology, is that a scene can be changed from one location to another instantly. Or, it could go from day to night in the blink of an eye. Not only can this be done by changing what is being projected, but the three-dimensional objects and background pieces can physically move to create different shapes. A tree in a brightly lit park can become a light post in a dark section of the city, and so on.

In addition to rapidly changing backgrounds and unique uses for projection mapping, we are expecting to see some classic uses of physical animatronic characters as well. Plus, there should be a slew of special effects to create blowing wind, water mists, heat blasts, and more to help flesh out some of the story beats. 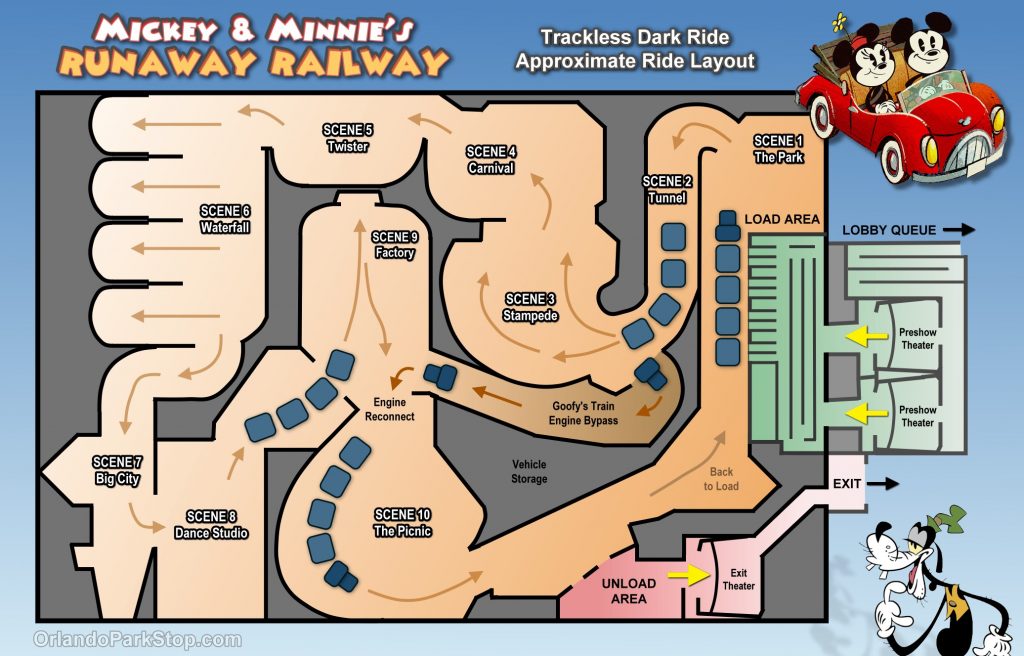 While the following is mostly based on rumors and unofficial information, if you’re attempting to go into the ride blind, and do not want the individual show scenes to be spoiled, you should not read this section. (Note: Click on track layout image above for full resolution version.)

Many of the ride scene details below were first shared by WDW News Today all the way back in November of 2017, and you can see their original story here. You can also see how these scenes line up with previous scenes from The Great Movie ride in a video by DSNY Newscast here.

First scene after loading onto the train is the park (Photo: Disney) 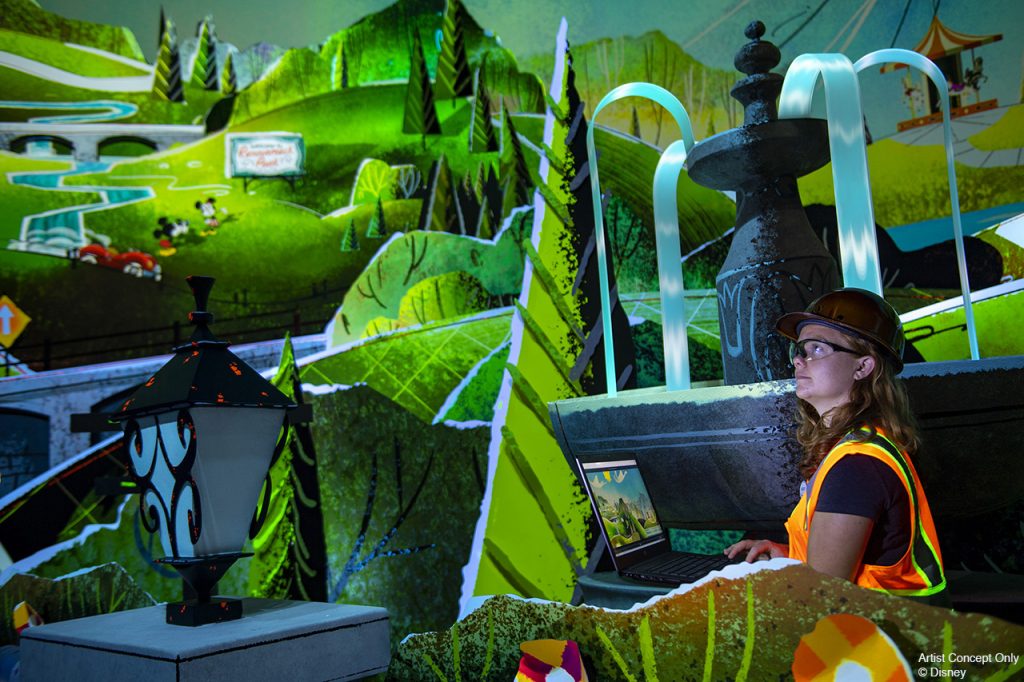 Behind the scenes for the park scene (Photo: Disney)

Scene 1: The Park – As we leave the load station, with Goofy’s train engine leading the four ride cars, we see a pretty park up ahead. We turn left towards a tunnel, getting a good look at the forced perspective cartoony park on our right before the scene ends. 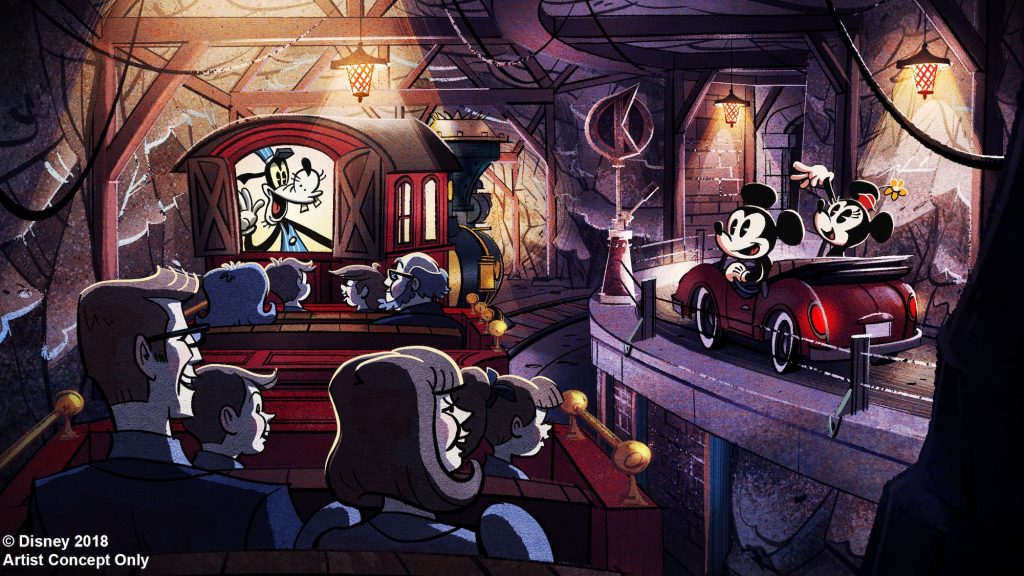 Tunnel scene will feature animatronic Mickey and Minnie in a car beside us (Image: Disney) 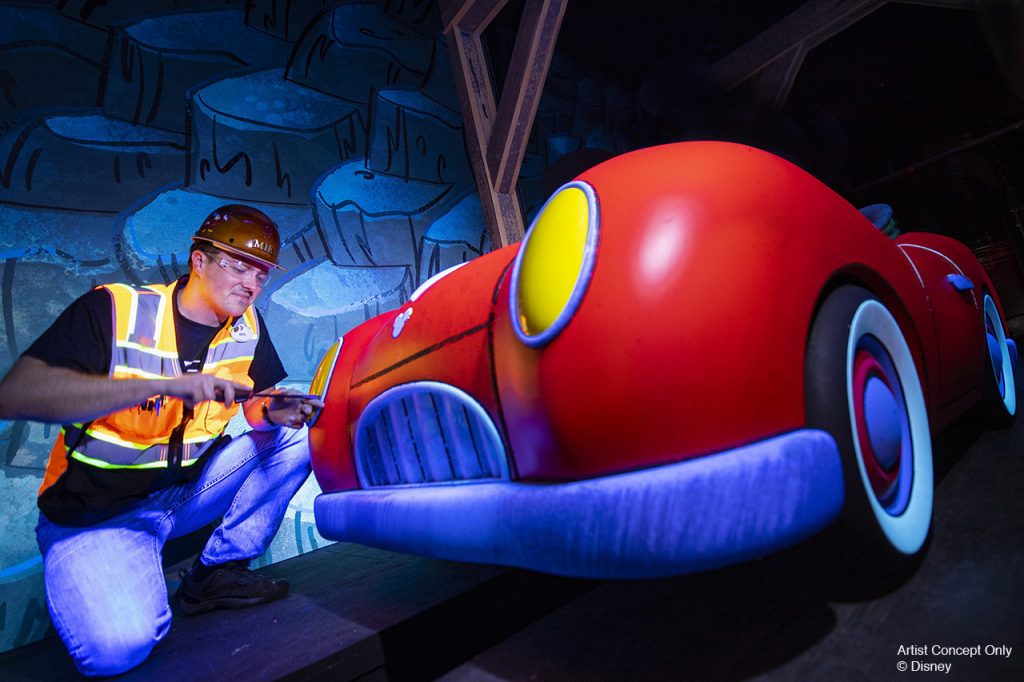 Work being done on the physical car for the tunnel scene (Photo: Disney)

Scene 2: Trouble in the Tunnel – Mickey and Minnie drive up beside us in their convertible. They are expected to be animatronic characters in a physical car traveling beside us as we make our way through the tunnel. In a silly moment Goofy appears to make a wrong turn, heading to the left, while the rest of the ride vehicles continue moving in a different direction.

Scene 3: Stampede – Now that we’ve lost our driver, we appear to be on our own — and in the middle of a stampede of bulls! Taking evasive maneuvers our four cars split into two different directions, weaving left and right around the stampeding animals to make it out alive. At this point, in just the third scene, all bets are off for this ride, as the pretenses of us traveling in a connected train are long gone. CORRECTION 3/5/2020: Now that the ride has opened, it turns out that WE are the stampede, and Mickey is attempting to wrangle US as we swerve around out of control. Close though. 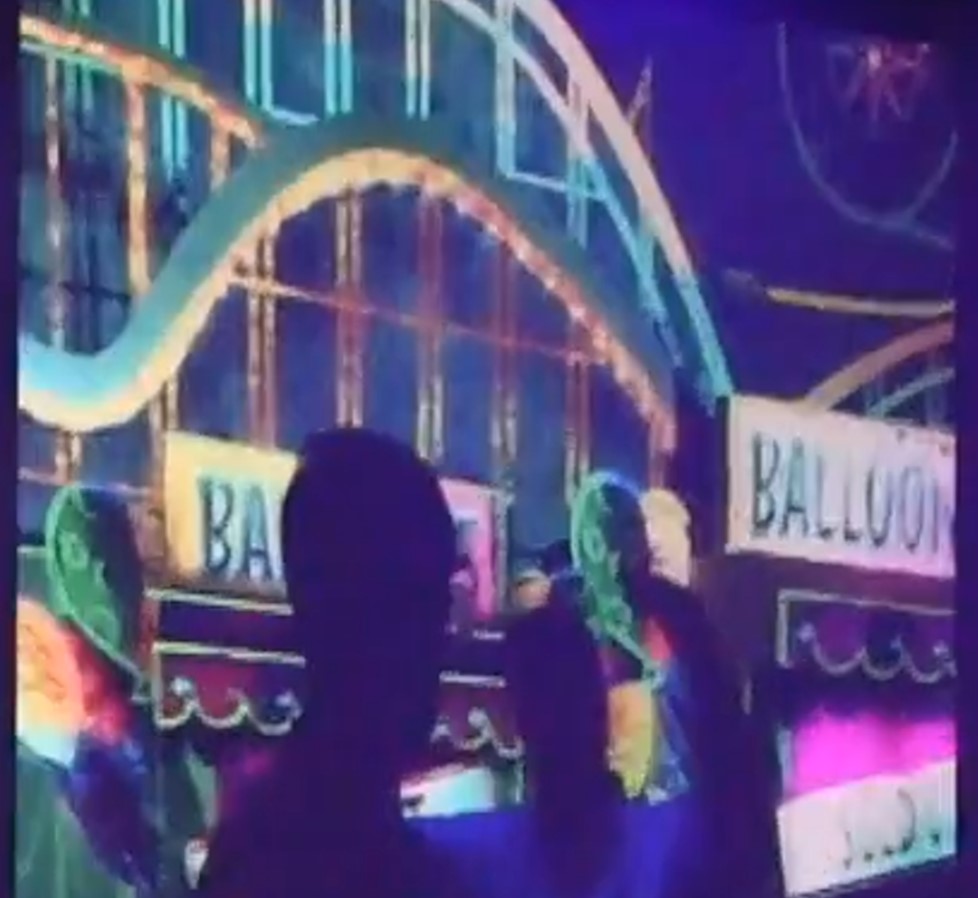 Scene 4: Carnival Chaos – Escaping the stampede we’ve found ourselves at a colorful carnival, with roller coasters and midway games around us. There’s no time for any fun however, as there appears to be a tornado approaching!

Scene 5: Twister – All four of our ride vehicles are spinning out of control as we’re whisked into the twister.

Scene 6A: Tropical Torrent – Somehow the tornado spits us out on a tropical island, and we’re caught in a current that’s taking us towards a waterfall. 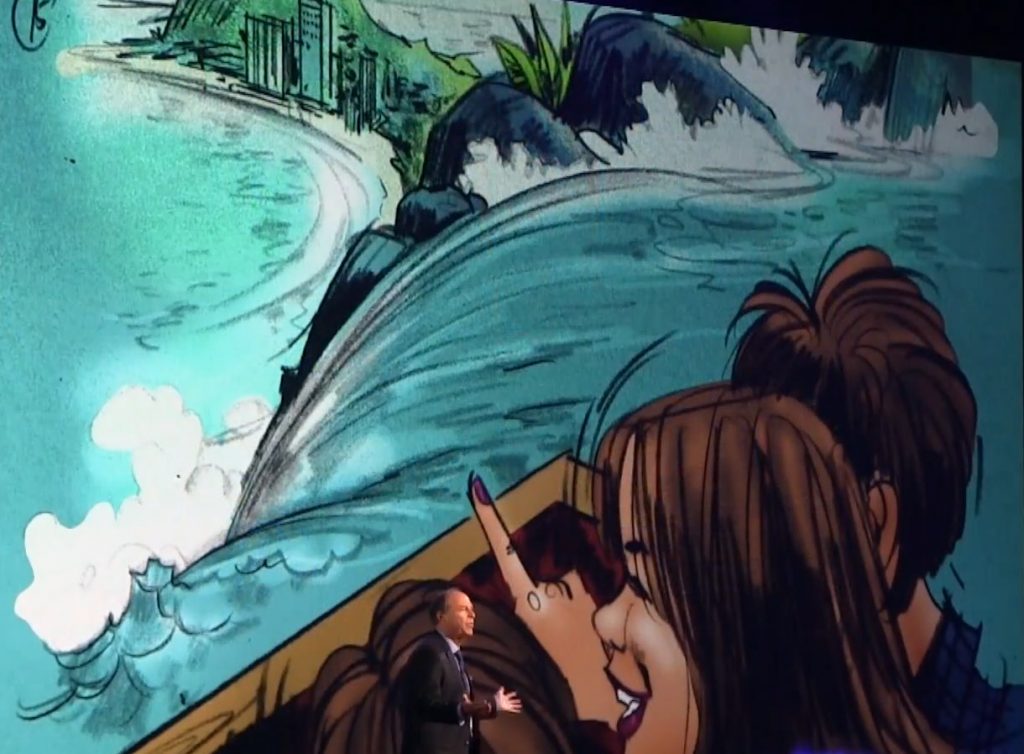 Scene 6B: Over the Falls – All four ride vehicles park into their very own projection dome. The scene has us teetering at the edge of a massive waterfall. Next thing we know we’re heading down the falls and then flowing towards a drainage pipe. (Don’t worry. This will not be an intense scene, as the attraction is intended to be able to accommodate small children.)

Scene 6C: Culvert – All four cars are now flowing through a pipe that’s headed right for the city.

Scene 7: Big City Snarl – The big city is all around us and we turn to enter a dance studio downtown.

Scene 8: Dance Studio Detour – Daisy Duck is teaching a class and all four of our ride vehicles start dancing along.

Scene 9A: Turnback Alley – The trackless ride vehicles got turned around from all that dancing as we back out into another alley. 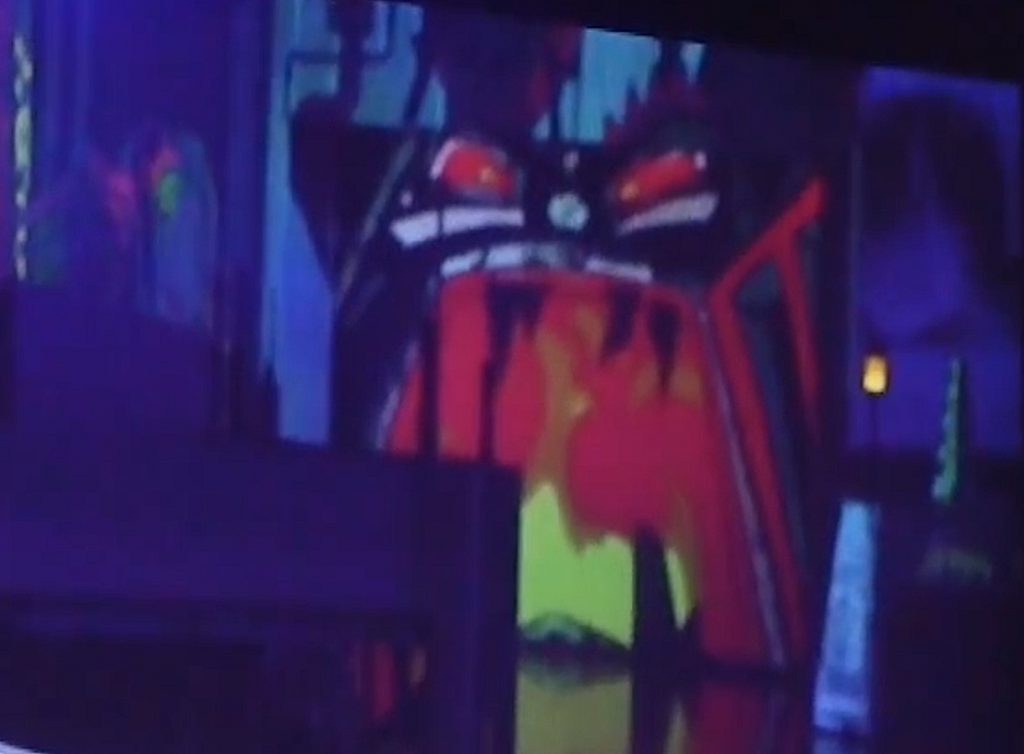 Scene 9B: Factory Frenzy – We’ve found ourselves in a dangerous factory, heading straight towards a crazy fiery furnace. All of a sudden we’re rescued by Mickey and Minnie, and start heading out of the factory, going forward.

Scene 10: Picnic in the Park – As soon as we exit the factory, Goofy in his locomotive engine comes out of nowhere and “reattaches” to the front of the train—as if nothing ever happened. It looks like Mickey and Minnie finally found the perfect spot for their picnic in the park too. This final scene is expected to include animatronic figures for Mickey, Minnie, and Pluto.

All of the guests then exit at an unload station, and walk back out of a movie screen, into a small recreation of the movie theater on their way to the old Great Movie Ride exit. The empty ride vehicles continue on towards the train barn up ahead to pick up more passengers.

Like a more family-friendly version of Rise of the Resistance, Runaway Railway promises to be a mind-blowing blend of ride technology and special effects. The new attraction will be the first new ride in a long time to feature its very own original song, with music and lyrics written specifically for this attraction. Plus, it will pay tribute to Mickey’s very first synchronized sound cartoon, Steamboat Willie, by having the very same whistle used for the boat in that short as the train whistle sounds on this ride!

Mickey & Minnie’s Runaway Railway is scheduled to open at Disney’s Hollywood Studios on March 4, 2020. It is not yet known if this new attraction will utilize Virtual Queue like we have seen with Rise of the Resistance, however it is a possibility given the small amount of physical queue available for Runaway Railway. If it does utilize Virtual Queue, it may only be temporarily. Stay tuned to the site, subscribe to our news feed, or our Twitter account, for more details on the grand opening of this new ride as we get closer! 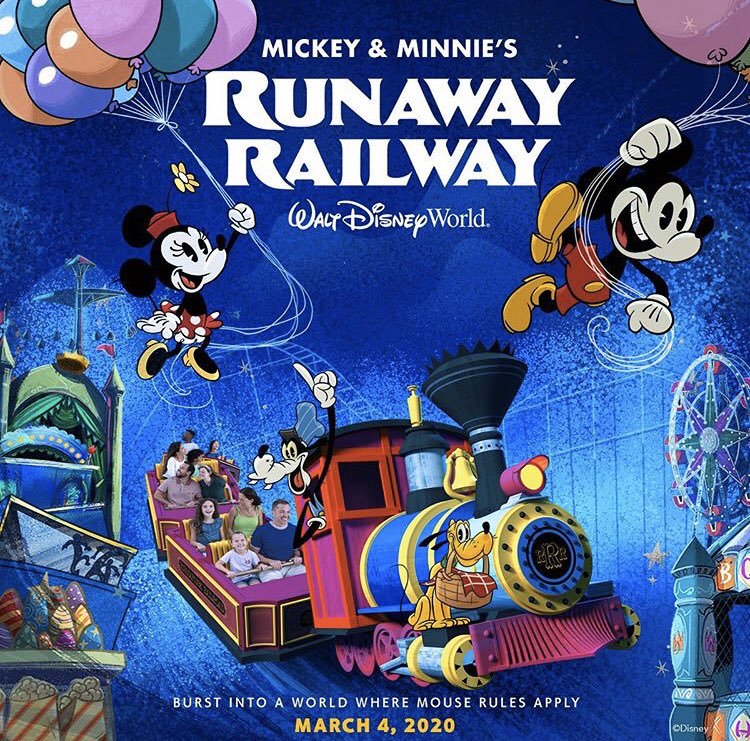 Subscribe to the news feed or enter your email below to never miss an update. Track Layout Graphic by Alicia Stella | Official Images by Disney | Other images as captioned