We’re getting some details about the new water slide coming to Typhoon Lagoon later this year. Originally called “Miss Fortune Falls,” the newly renamed “Miss Adventure Falls” is scheduled to open when Typhoon Lagoon re-opens after its yearly refurbishment is complete in March 2017.

Disney is touting the new attraction as the longest ride in the history of the Disney water parks. At two minutes, this raft ride will carry four passengers up a conveyor belt and then down a winding white water rafting adventure. You’ll travel through a path filled with the many treasures collected by Captain Mary, a sea-faring treasure hunter whose haul was caught in a rogue typhoon.

Looks like the ride will have no height limit, so families will be able to enjoy the ride together. The entrance will be just past Crush ‘n’ Gusher, located on the former site of the Shark Reef experience, which closed permanently last year. 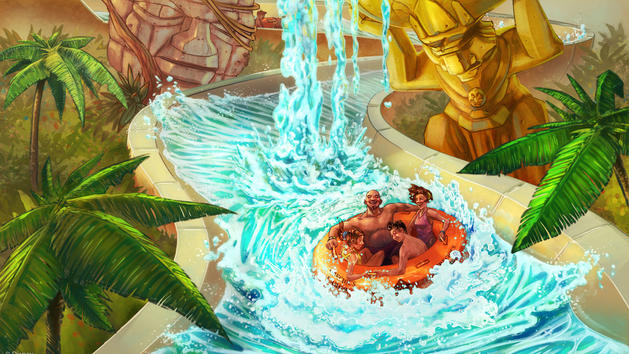 You can learn more about the new attraction from Disney’s official website. See the official write-up below and stay tuned for more news as it happens.

Gather your crew and climb aboard for a thrilling, white-water voyage you won’t want to “Miss.”

Just beyond the pineapple fields of Crush ‘n’ Gusher awaits an all-new, family-raft attraction owned by Captain Mary Oceaneer—a sea-faring treasure hunter whose haul was caught in a rogue typhoon… and scattered across this tropical paradise years ago.

From your 4-person raft, feel a rush of excitement with family and friends as an aquatic conveyor belt chutes you into action. Then, hold on tight as you spy precious artifacts collected from all around the globe.

If you’re lucky enough, you may even meet the captain’s old diving partner—an Audio-Animatronic parrot who’s still hunting for treasures at Disney’s Typhoon Lagoon water park to this day!