Disney’s Animal Kingdom will mark its 20th anniversary on Earth Day, April 22nd, with new celebrations, special events, and the grand opening of a new show. Guests will be able to participate in enhanced animal encounters and attend conservation talks during Party for the Planet, a limited edition Wilderness Explorer badge will be available for kids, take home a collectible print created by Joe Rohde, special meet & greets with rare characters will be available, and more.

The new show, UP! A Great Bird Adventure featuring Russell and Dug from the Disney•Pixar animated comedy-adventure film “UP” will debut on April 22nd. The show, which replaces Flights of Wonder, will give guests the chance to see Senior Wilderness Explorer Russell and his fuzzy friend Dug in a new adventure that includes encounters with exotic birds from around the world. See the full list of special events and celebration for Animal Kingdom’s 20th anniversary below, and stay tuned for more theme park news and updates! 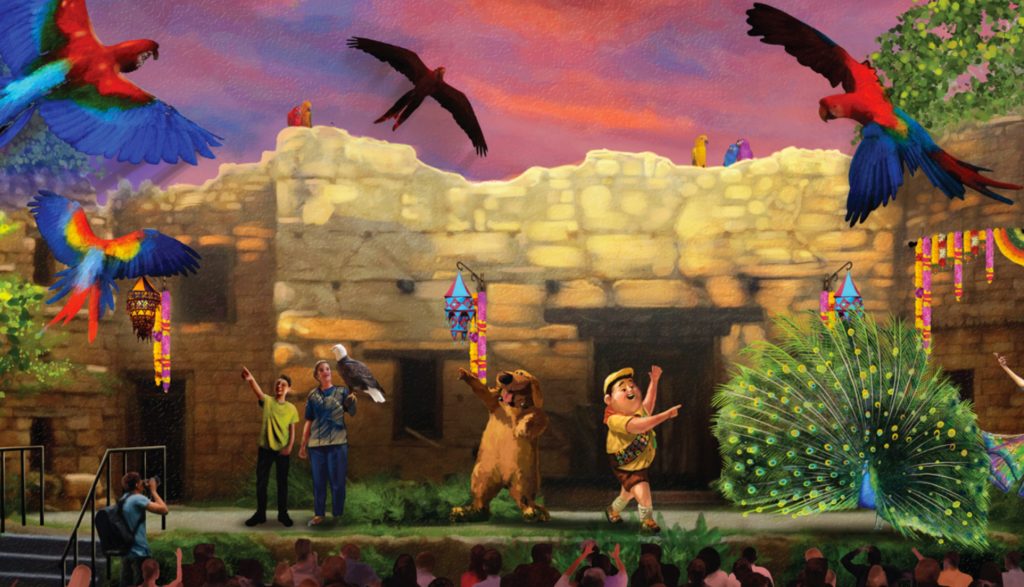 Commemorating the milestone year, the 500-acre adventure park will offer animal encounters, family-friendly activities, specialty desserts and more during an expanded Party for the Planet celebration April 22-May 5.

Over the two-week “Party for the Planet” celebration, guests can attend conservation talks by animal-care experts and participate in enhanced interactions with some of the more than 2,000 animals that make their home at the Association of Zoos and Aquariums-accredited park.

Guests can also commemorate their visits to the theme park with special photo opportunities. They can step into an oversized picture frame celebrating the park’s 20th anniversary. Other photo frames support Disney’s “Reverse the Decline,” an initiative created to help protect 10 threatened animal species. One recent success of the program was the birth of two critically endangered Sumatran Tiger Cubs at Disney’s Animal Kingdom.

Just for kids is the chance to earn a limited-edition badge as part of the Wilderness Explorer program. The badge is one of many that youngsters can earn by completing fun activities throughout the park.

The 20th anniversary fun also includes a commemorative adventure guide, limited-edition merchandise, and a special-edition print created by renowned Walt Disney Imagineer Joe Rohde. He will be available on April 22 from 1-4 p.m. to sign prints at Discovery Trading Company. Quantities are limited.

Here are other experiences and adventures rolling out in 2018 at Disney’s Animal Kingdom:

• April 22 will mark the debut of a brand-new show, UP! A Great Bird Adventure featuring Russell and Dug from the Disney•Pixar animated comedy-adventure film “UP.” The show will give guests the chance to see Senior Wilderness Explorer Russell and his fuzzy friend Dug in a new adventure that includes encounters with exotic birds from around the world. This free-flying show will be performed multiple times daily.

• Memorial Day 2018 commemorates the one-year anniversary of Pandora – The World of Avatar. Here, travelers are transported to a mystical world of floating mountains, bioluminescent rainforests and breathtaking new experiences. Inspired by the blockbuster film, AVATAR, the epic land invites guests to explore a glowing landscape, encounter a larger-than-life Na’vi Shaman of Songs and soar on the back of a banshee.

Stay tuned for more theme park news and updates! Subscribe to the news feed to never miss an update or enter your email below. If you’re looking for a good deal on Disney World tickets to visit Animal Kingdom during the 20th anniversary, check out Best of Orlando. Photos Disney