Epic Universe would be Universal Orlando’s third theme park. Planned to be built near the Orange County Convention Center, it’s expected to be their largest theme park. With four immersive lands, a massive central hub, and a hotel connected to the back, Epic Universe was being touted as a revolutionary theme park. That is, until a global crisis caused the park to be delayed, introducing uncertainty.

Let’s go over some of the recent news, as well as rumors for what the park might be like after construction gets back on track, for Universal’s Epic Universe. Check out the video version of this article for additional visuals.

Officially announced nearly a year ago on August 1, 2019, the new park was originally intended to be open by 2023. While that target year was never revealed to the public directly, it was shared with investors during multiple Comcast earnings calls.

Comcast is Universal’s parent company. Since taking full ownership of the parks back in 2013, they’ve been moving full steam ahead on adding new rides and attractions at all of their existing theme parks—as well as building new ones like the one set to open next year in Beijing, and now Epic Universe.

On April 30th of this year, during another earnings call, Universal said that Epic Universe would be delayed, although no specifics or timetables were given. A Universal spokesperson told reporters that the delay would give contractors, vendors and Universal creative partners more flexibility to work together “within a changing environment.”

Orange County Mayor Jerry Demings said Universal officials told him the day earlier that the overall construction project is going to be delayed by a year, however, they’re going to continue with construction that is really underway. 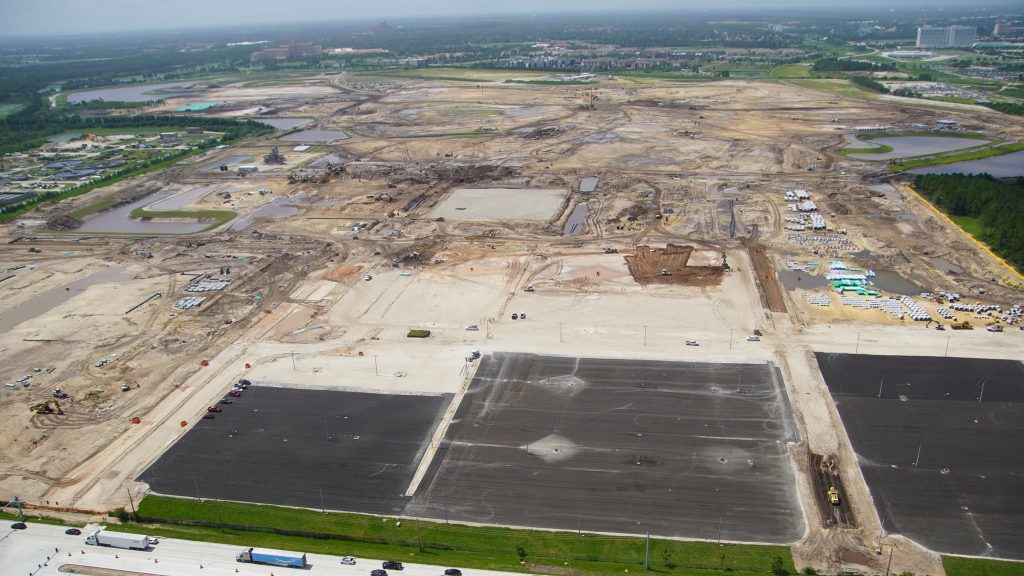 And continue it has. Infrastructure work, land grading, and more has continued in the months since. The ground has been dug up and utility pipes have been placed and buried. The parking lots have been poured for the backstage areas, which is also where temporary trailers are expected to be placed during construction. They’ve even added an on-site concrete plant in preparation of pouring foundations when they’re ready.

Another project that will most likely continue, despite any slowdowns for the theme park construction itself, is the Kirkman Road extension. This road is planned to be expanded so it can connect from the existing Universal Orlando Resort to the new southern resort nearly two miles south. This would not only help bring guests back and forth between the two resorts, utilizing planned dedicated bus lanes, but would also help alleviate traffic congestion in the area in general. Universal and the county are splitting the cost of the expansion, with Universal spending at least 164 million dollars themselves. 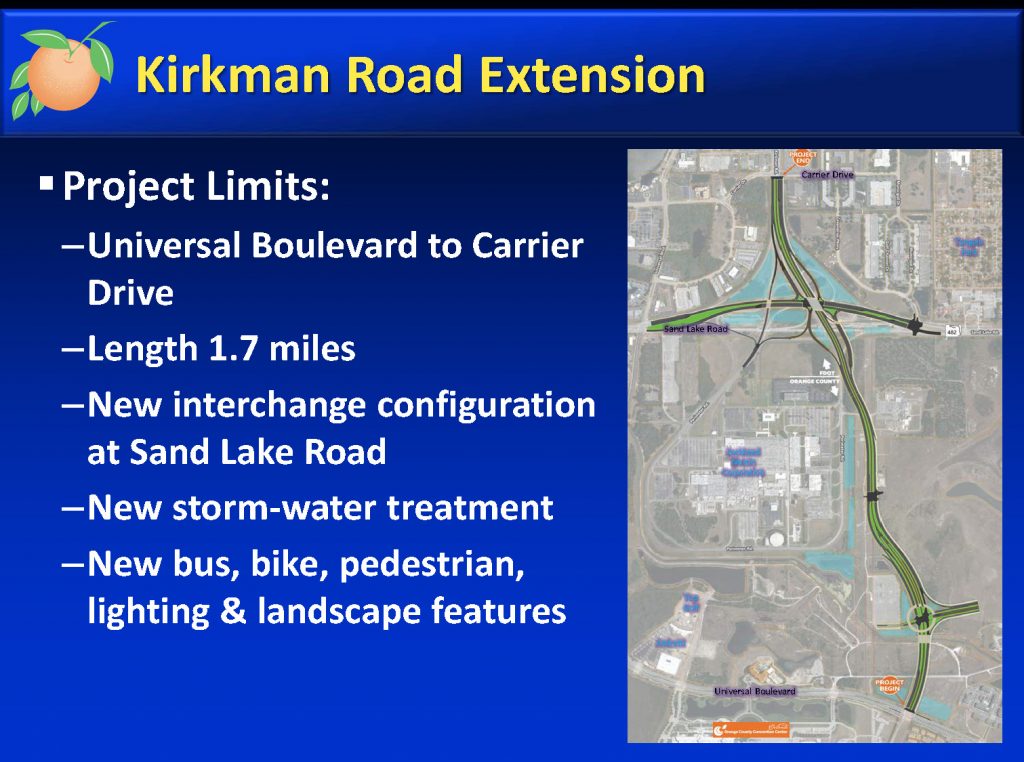 And that isn’t the only project that Orange County is hoping to help out with. Just this month Mayor Demings also proposed giving Universal up to 5 million dollars in credits to help offset the cost of relocating an existing wastewater pipeline. Universal needs to move the line as part of the Epic Universe project and the city would grant them credit towards future utility charges. Universal claims the 35-year-old utility pipe “would have to be replaced at some point anyway.”

While all of this infrastructure work has been continuing, many are worried about how long vertical construction for the actual park may be delayed. Last month, it was reported that Universal Orlando laid off an unspecified number of employees, including what some say was more than half of their Creative teams. There have already been rumors of some of these Creative employees returning in the Fall, specifically those that were assigned to Epic Universe.

As for what this new park is supposed to contain, the most notable of the four planned lands is of course Super Nintendo World. This is also the only area that has been confirmed by Universal themselves. It’s planned to open with the Mario Kart ride, a Yoshi family ride, and the Donkey Kong mine cart coaster. There’s also an expansion plot next to the area that’s rumored to be earmarked for future Nintendo based attractions later on.

Rumored to be built on the bottom-right side of the park is a land based on How to Train Your Dragon. This area would feature a roller coaster, where you get to ride on a dragon through the area, as well as a boat ride, flying flat ride, and a stage show. Over on the opposite corner of the park, a land rumored to be based on Universal Classic Monsters would feature a large dark ride inside of a building themed to Dr. Frankenstein’s manor and laboratory, and some sort of show.

There are rumors for a possible attraction set in the British Ministry of Magic, Image: Warner Bros.

The fourth land, located on the top-right, looks like it will be based on the Wizarding World. The current plans seem like they incorporate both one main attraction based on the Harry Potter series, set in the British Ministry of Magic, and another attraction that would take place in the French Ministry as seen in the second Fantastic Beasts film.

Even the central hub, which will contain restaurants and shops, is also planned to contain a couple attractions. The most obvious of these would be the dueling roller coaster off to the right side of the park. This racing coaster is rumored to be themed to outer space in some way. The plans also call for a 500-room hotel connected to the back of the theme park, as well as more hotels possibly located across the street. 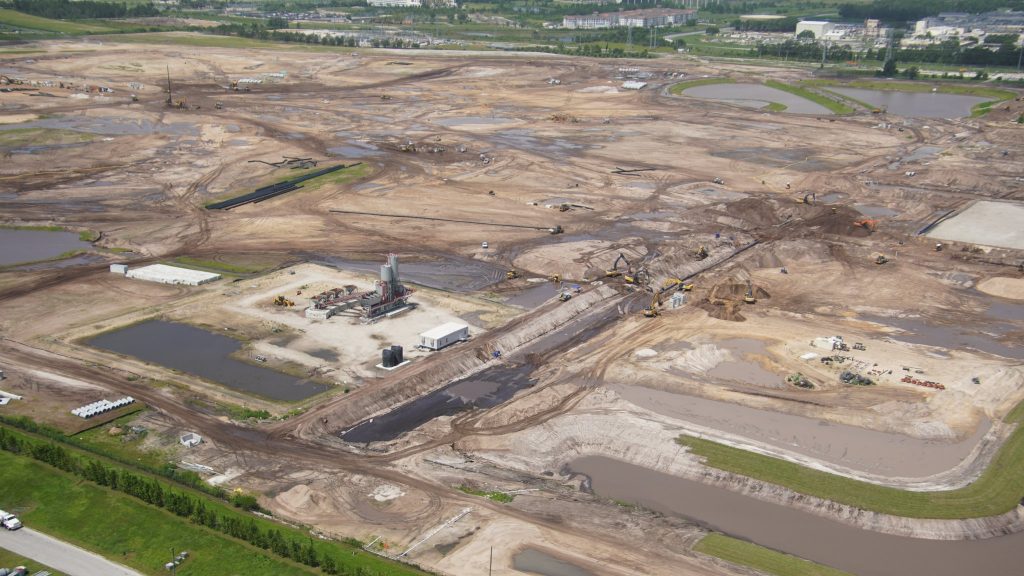 Concrete plant set up at the future site of Epic Universe, Photo: bioreconstruct

In May, Comcast CFO Mike Cavanagh made it clear that the company is only “delaying” Epic Universe, and that they were not cancelling it. “The confidence is high,” he said. “It’s a great project.” Universal will likely be looking towards the future, and keeping an eye on analysts’ predictions. It’s possible that if the not-so-distant future looks bright enough, then this massive project get back on track before we know it.

Stay tuned to the site for more Epic Universe updates, and check out this link for previous articles, including more specific details for each of the park’s rumored lands.