Originally announced in 2019 and scheduled to start in 2020 before being postponed indefinitely, the next major refurbishment for Spaceship Earth was set to once again change the story for EPCOT’s flagship attraction.

Almost the entire ride was to receive some modifications, with nearly half of the scenes completely replaced, but do we really know what those new scenes would’ve actually been like? Let’s go over what was officially announced, and what was rumored, for the next update to Spaceship Earth. (See the video version of this story for additional visuals.) 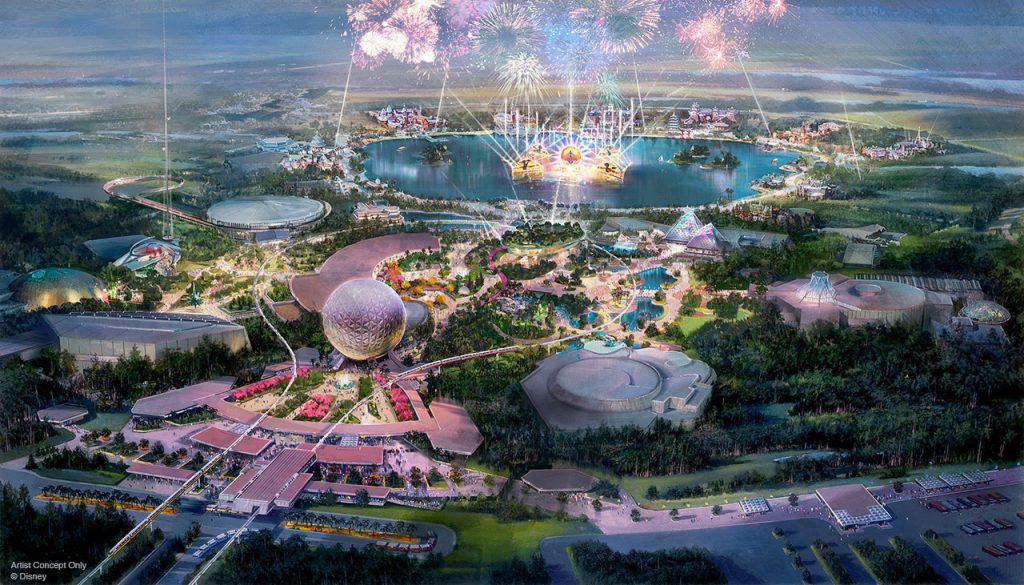 Official concept art for the future of EPCOT

At the D23 Expo in 2019, then Chairman of the Disney Parks, Bob Chapek, described what was happening at EPCOT as the “biggest transformation of any park that we’ve ever accomplished.”

The park was going to get new neighborhood designations, a new entry area with the return of the fountain, several new attractions, and at the heart of it, the park’s icon, Spaceship Earth was going to receive a massive refurbishment. 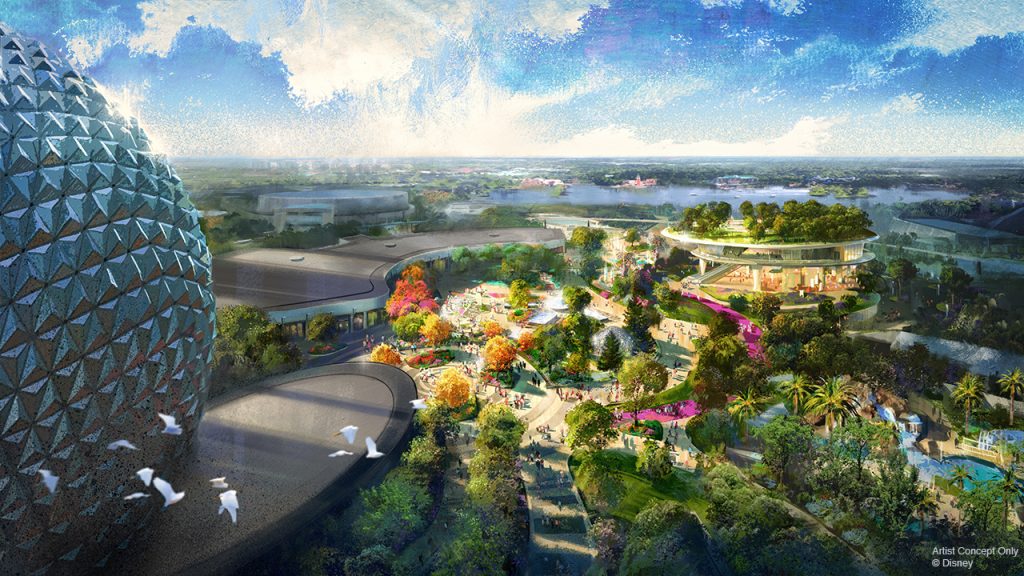 Concept art for World Celebration, including Dreamer’s Point in the center

As the main attraction for the newly named “World Celebration” in the center of the front half of the park, Spaceship Earth’s story and many of its scenes were set to receive major changes. The exit area for the ride would be removed to make way for the entry into the new Dreamer’s Point.

Dreamer’s Point was announced as an elevated area with a panoramic view of the park. It was set to feature a lush garden with a “wishing tree”, interactive fountain, and a statue of Walt Disney. 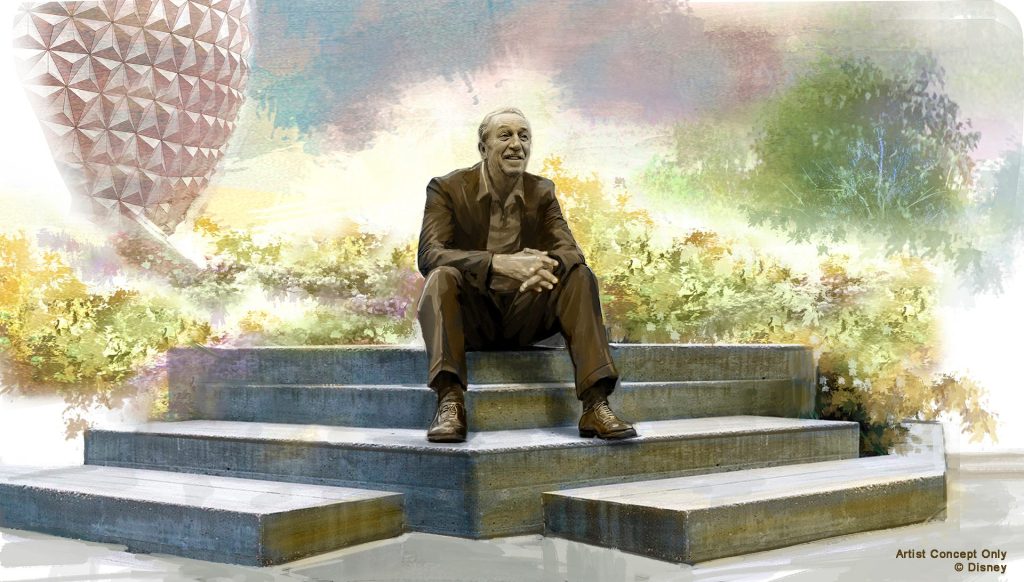 Dreamer’s Point appears to still be on, according to recent press releases and the Walt Disney World Resort’s 50th anniversary special on ABC, but all mentions of the Spaceship Earth update have been removed from the official websites, and from the EPCOT Experience inside of the park.

When the parks reopened to guests after closing due to pandemic safety concerns last year, Disney said that the Spaceship Earth update was being postponed while they evaluate their long-term project plans. 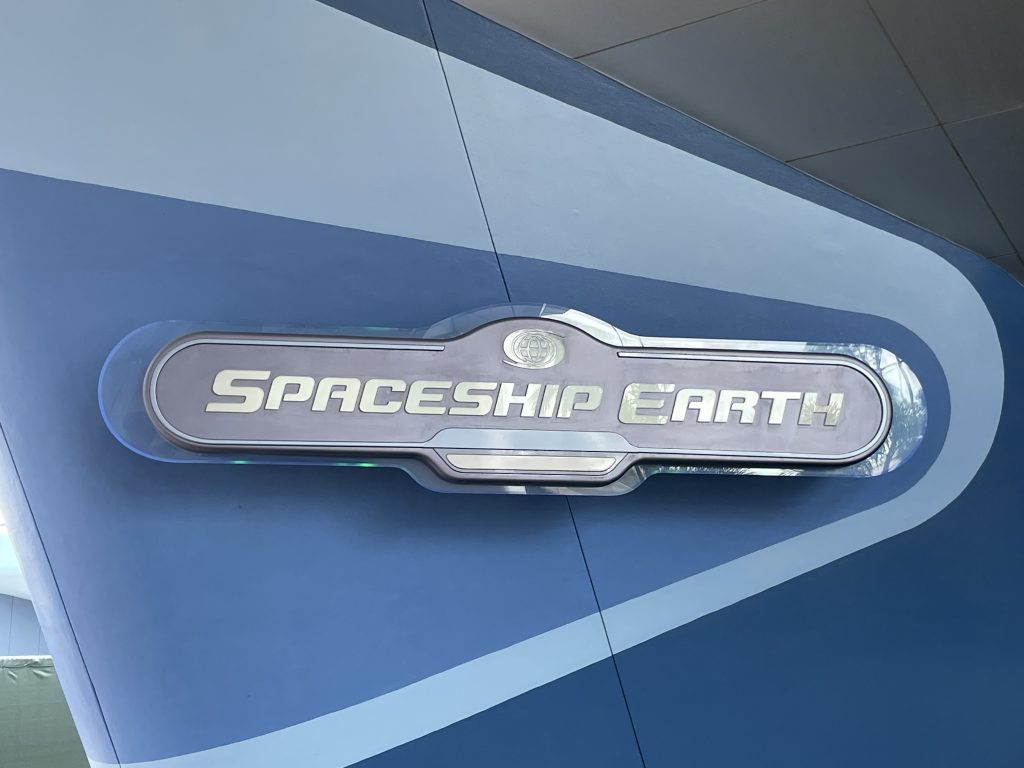 Spaceship Earth sign, now posted without a sponsor below the name

It doesn’t help that the attraction lost its sponsor in 2017, and has been operating without a sponsor for the first time since the park opened in 1982. Normally the sponsorships for this ride were what helped to pay for its updates, and the sponsors would even have some say in the direction of its new story.

Official concept art for Spaceship Earth from D23 Expo in 2019

Disney didn’t give many official details when they announced the Spaceship Earth re-do. They confirmed the attraction would be receiving new narration and a new musical score.

The ride was to remain a “story through time,” however the theme was shifting to focus on “the human experience and the art of storytelling”. Disney was calling this new version of the ride “Spaceship Earth: Our Shared Story.”

We were also introduced to a magical “story light” that was going to guide us on our journey through the attraction. The few pieces of officially released concept art appeared as though this would be achieved using different techniques, including projection mapping.

Rumors had the first half of the attraction staying mostly intact with only minor changes, as has been the case in previous updates, but major changes were planned for the rest of the ride, beginning with the Industrial Revolution scene. 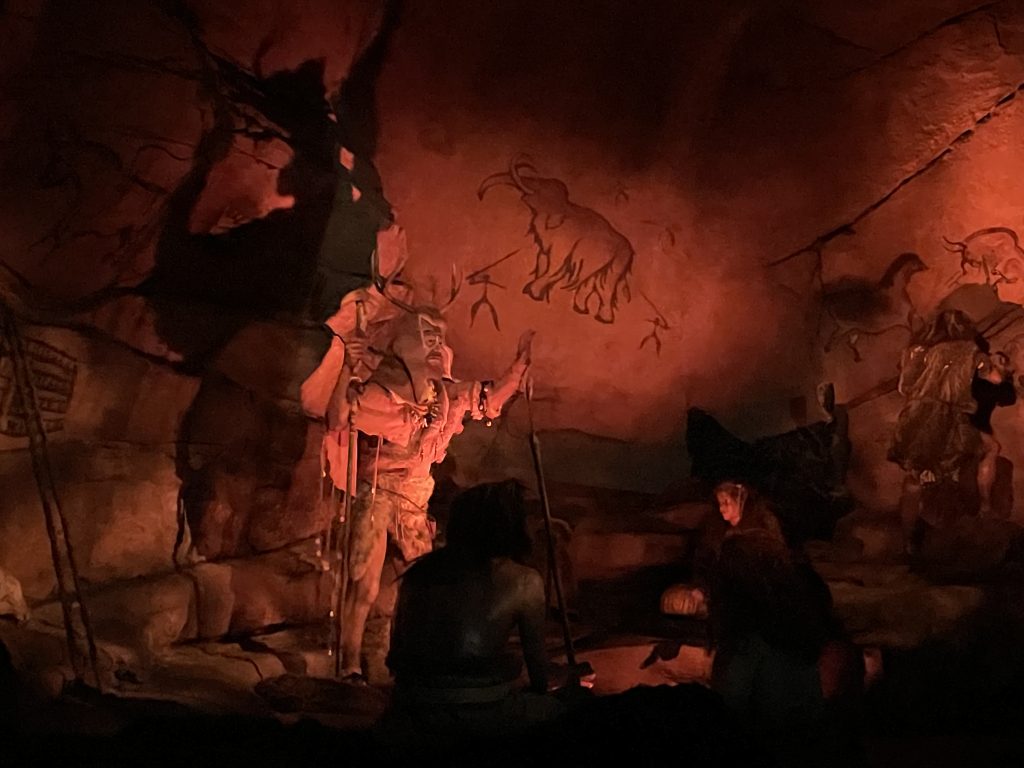 Let’s go through all of the rumored changes we thought we were going to see for this next iteration of Spaceship Earth. While very little of this has been confirmed at this time, there may be spoilers here in case they’re accurate, and if this project does go back into development. 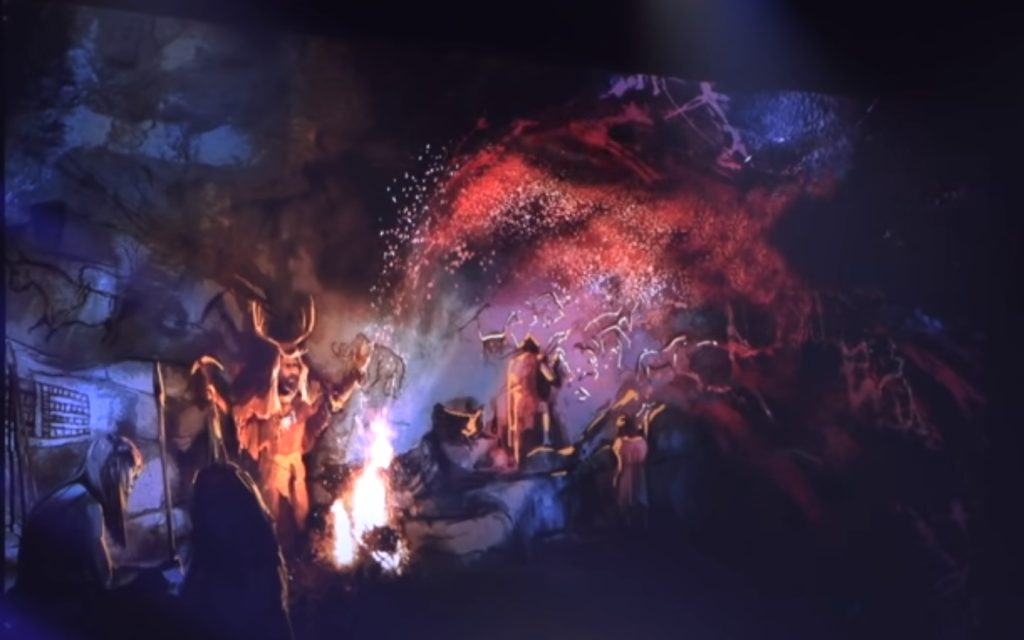 The ride was going to start with the birth of the story light, with the first storyteller telling tales by the fire; the fire itself transforming into the images he is speaking into life. This story light would then move from scene to scene, taking a new form depending on the setting and time period.

Large sections of the backgrounds for each scene may have been carved out to give this story light more surface area to be projected on.

The next scene, Egypt, would apparently focus more on the stories told through hieroglyphics rather than on papyrus. New projection mapping effects would make these hieroglyphics come alive around us in the scene. 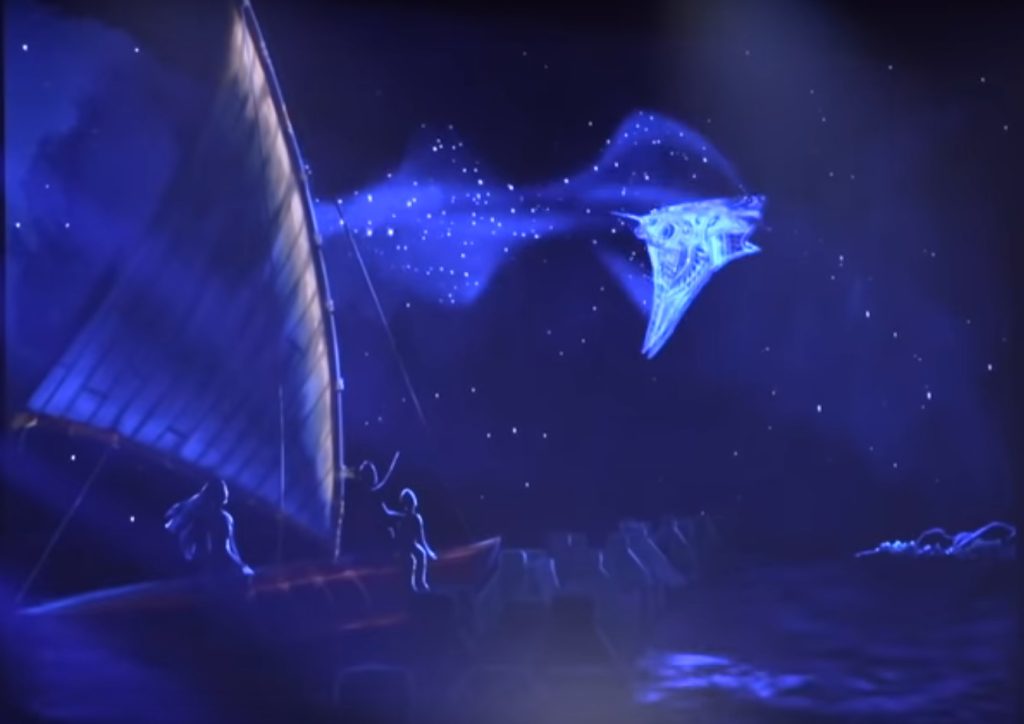 From official concept art it appeared that the Phoenician scene would be replaced with Pacific Island storytellers, with a sting ray spirit soaring across the night sky, not unlike what is seen in Disney’s Moana film. 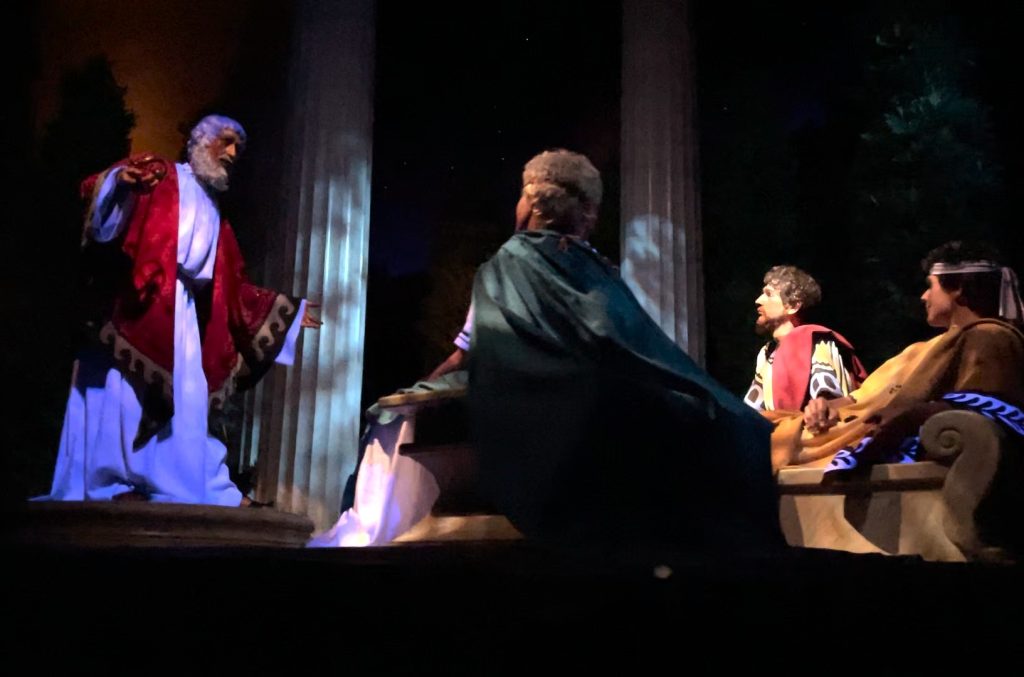 The Greek scholars scene would be reverted back to one that focuses more on theater, but instead of a Greek stage play being performed, this would feature a single storyteller, speaking to small audience about an epic tale, which appears behind him in the story light as he speaks. 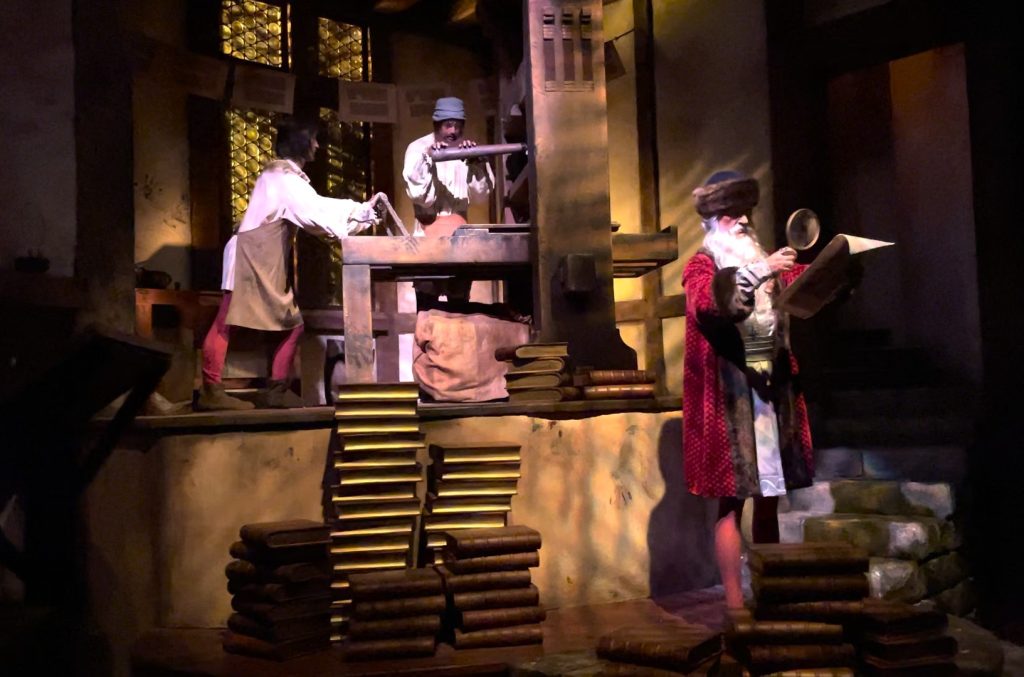 Many of the following scenes would only receive small updates, but would remain mainly the same, including Rome and the burning scene, the invention of the printing press, and the dawn of the Renaissance. 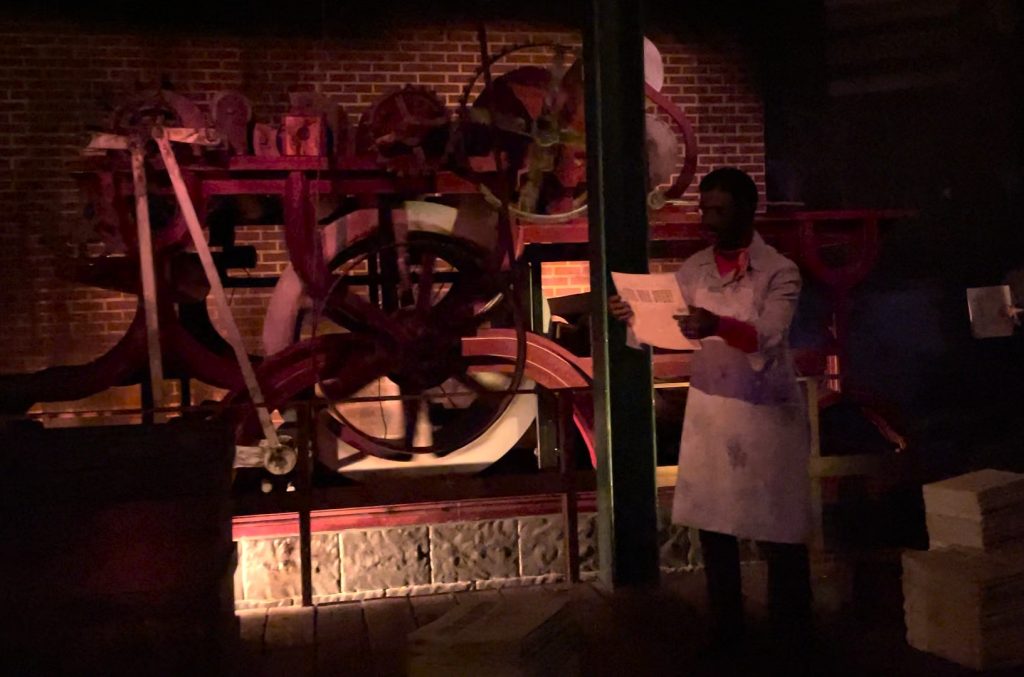 From this scene forward, everything was rumored to be changed

Next, beginning with the Industrial Revolution, is where everything would be ripped out for something new. Shortly after the Sistine Chapel scene, the story would focus on the explosion of communication brought upon by the advent of electricity.

Our story light would change from things like smoke or constellations in previous scenes, to beams of electricity, bringing with it stories from across the world. Similar to the existing power lines seen on the ride today, a much grander scene would be created to illustrate this pivotal moment in history. 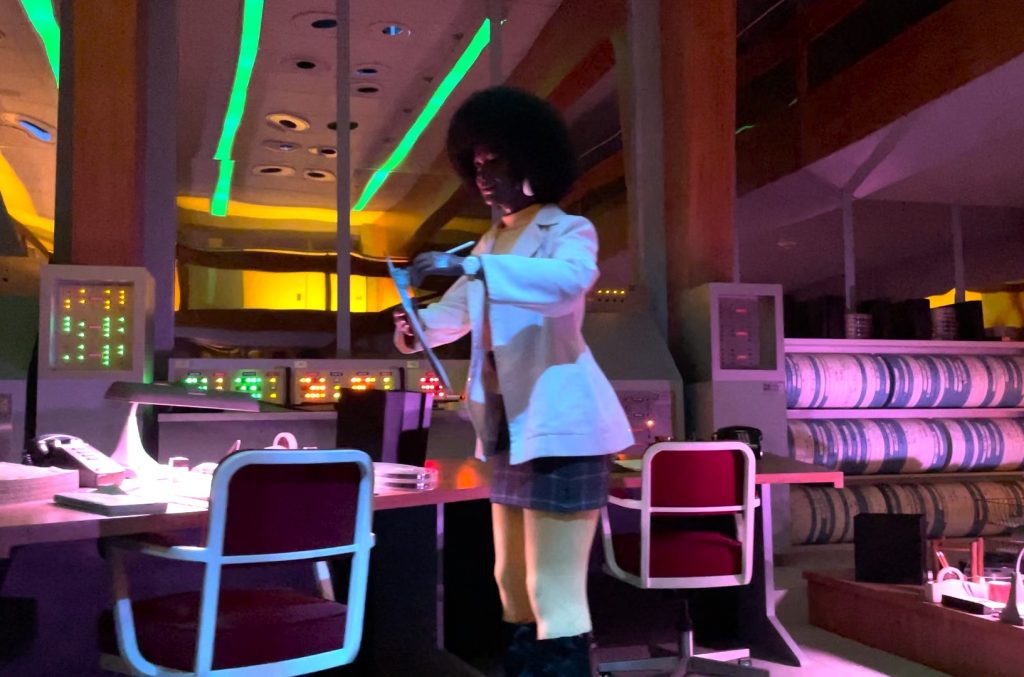 The story would then transition from analog storytelling, like radio and TV signals, to digital technologies. The story light would now appear more like fiber optic digital lines branching across the globe.

An explosion in new talent, no matter where you live or what economic background you come from, gives everyone equal footing in being able to tell your own story. The internet allows us all to share our creative endeavors and personal stories.

There were also rumors for Walt Disney to be featured towards the end of the ride, for being the ultimate storyteller, and he may have been set to appear during the electrical age section, but I believe the ride was to conclude with our own ability to share our personal human experience with others. 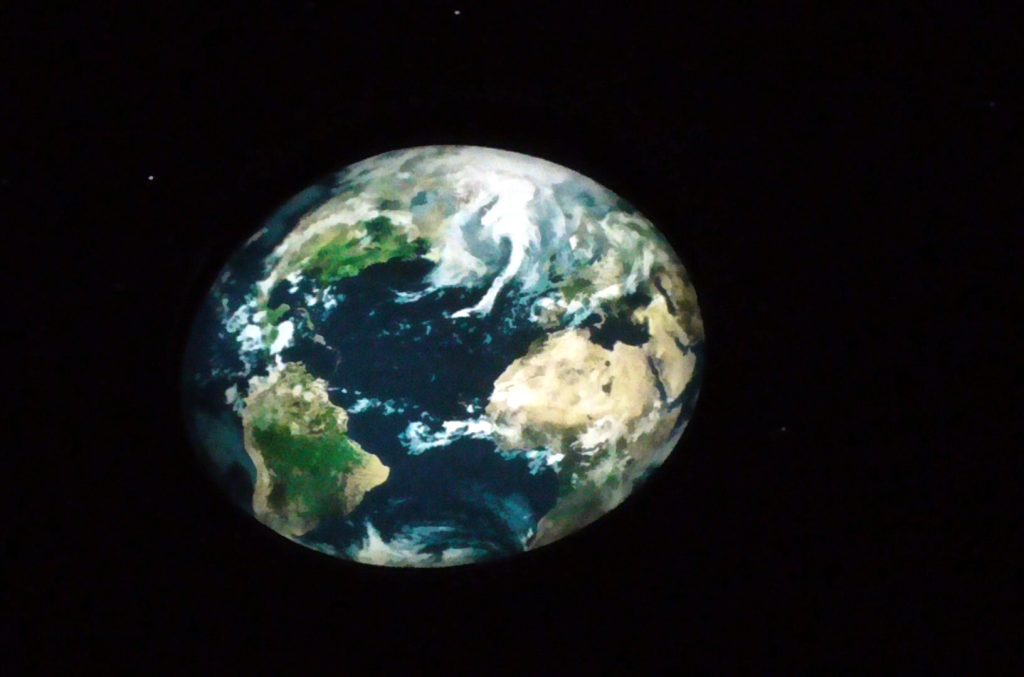 Our view of Earth from space at the top of the ride would’ve likely received some new technological updates to improve the projection as well.

The ride’s decent would also be updated, bringing back some more tangible scenery on either side of the vehicles. The on-board screen may have still played some part, (at very least for selecting your preferred language at the start of the ride,) but rumors are there would’ve at least been some new interesting scenery added along the way down. 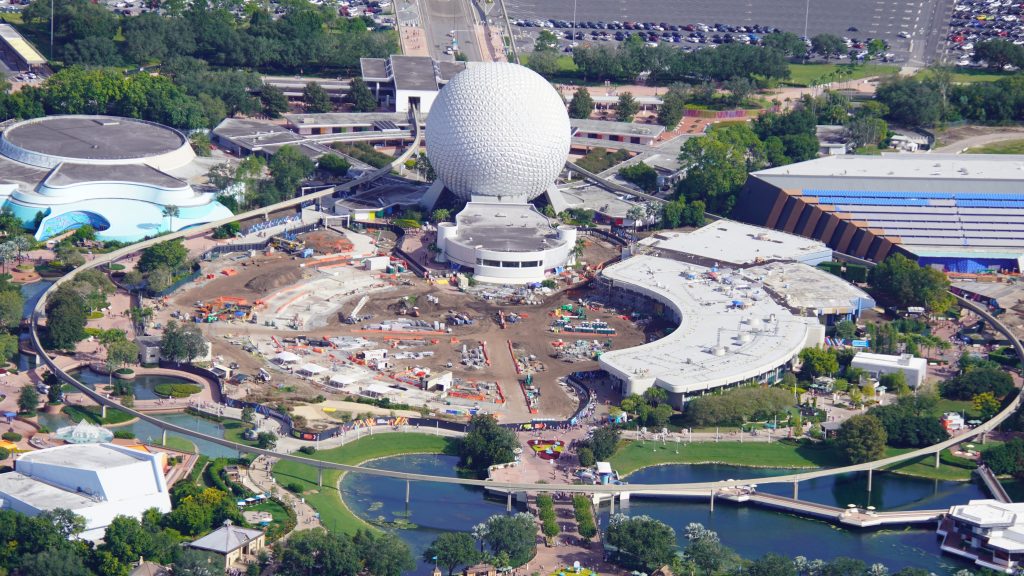 Construction is continuing on the park’s World Celebration area, but we’re still not sure if the Project Tomorrow post-show at Spaceship Earth’s exit will close for the building to be altered, or if they will just alter the plans for Dreamer’s Point behind the building and keep the post show intact.

Spaceship Earth will likely still need work to help keep its aging ride system running. Perhaps we could see a pared down version of these plans instituted at some point during EPCOT’s 40th anniversary next year in 2022? 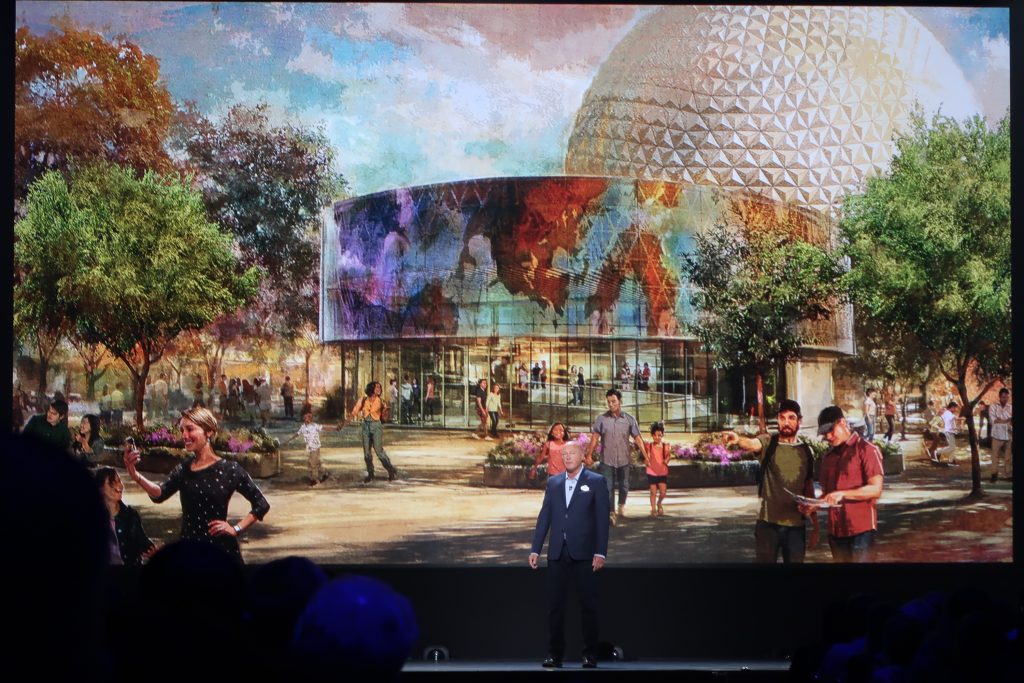 We’ll keep our ears out in case Walt Disney World says anything, anything at all, about this classic ride’s next update.

That’s all for now, but if you’d like to take a bit of the parks home, check out SouvenirScents.com. They offer plenty of scents inspired by theme park attractions, including several from EPCOT, like the baking bread smell on Ratatouille, all the scents on Soarin’, and more on the way. Use promo code PARKSTOP10 to save 10% at SouvenirScents.com. 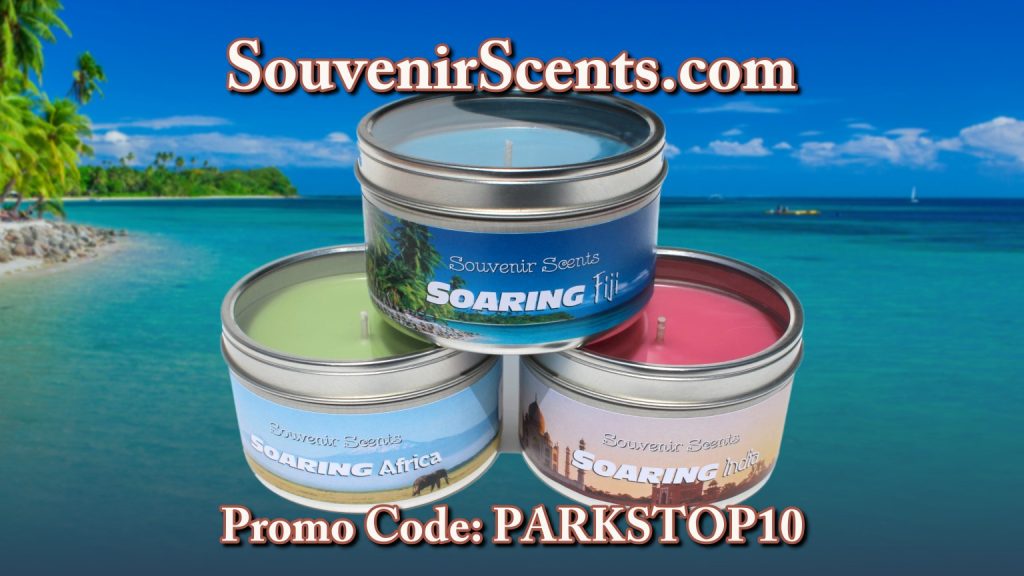 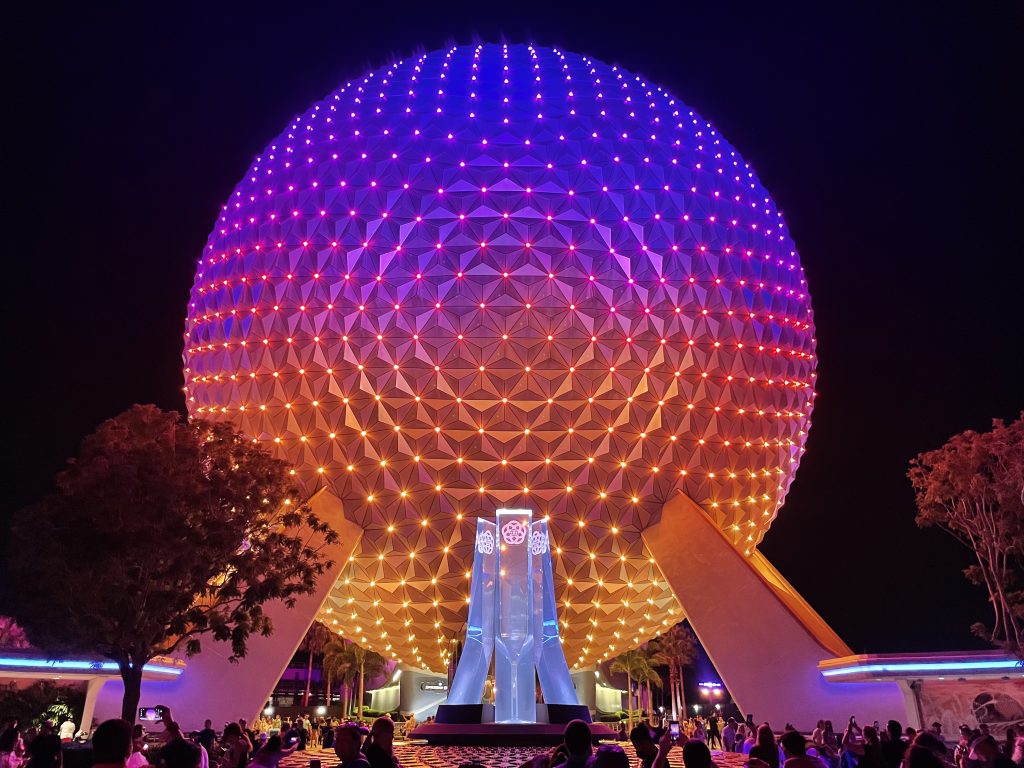 Subscribe to the news feed or enter your email address below to never miss an update. Original Photos: Alicia Stella | Official Concept Art: Disney | Other Images as Captioned