Universal Studios Beijing is set to open in 2021, and while it will feature a mix of some older and along with some new theme park lands and attractions, one of the most intriguing lands will be based on Jurassic World.

With a suspended family coaster that passes through a mountain, a play area inside of a massive aviary, and a brand-new dark ride, this will be a whole new take on a Jurassic-themed land for a Universal park. Let’s check out what you’ll be able to find inside of the Jurassic World Adventure ride, along with the rest of the land, in today’s news update. See the video version of this story for additional visuals.

Expected to open next summer, Universal Studios Beijing will feature lands based on Transformers, Kung Fu Panda, Harry Potter, Minions and more. The park was originally set to include a land based on Jurassic Park, featuring the River Adventure ride. However, Jurassic World was released to theaters while the park was being designed, and it grossed more than 1.5 billion dollars worldwide at the box office. It was also the biggest opening for a Universal film in China at the time. 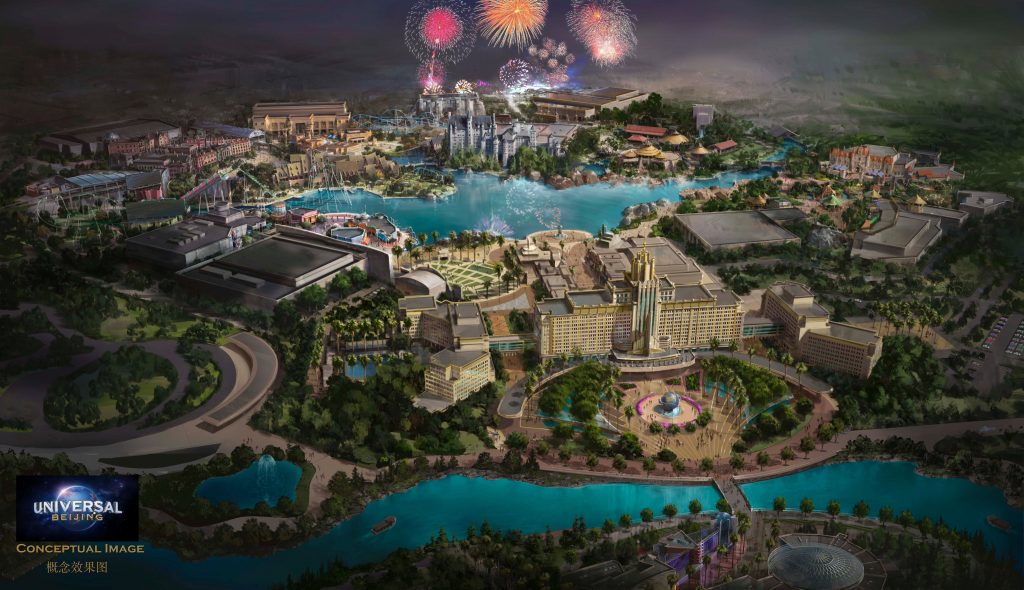 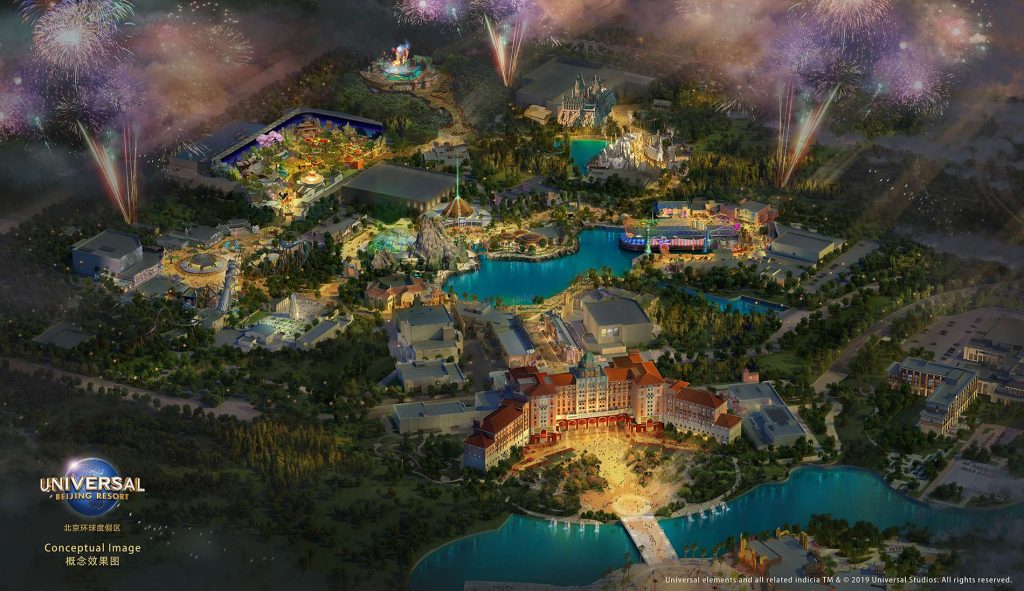 The plans were adjusted, and now this new theme park is set to receive the world’s first Jurassic World themed land (that was designed to be Jurassic World from the start, unlike Hollywood’s version, which was converted in 2019 from Jurassic Park). This land will feature iconic elements from the first Jurassic World film, like the arch and the Innovation Center, but many of the land’s experiences will be entirely original.

With its central location within the new theme park, the Jurassic World land will conveniently contain several restaurants. One standout will be the fine dining location named Hammond’s, a tribute to Jurassic Park’s original visionary. This restaurant’s dining experience may be upscale, but I can’t help but notice similarities to the atriums and picture windows of Thunder Falls Terrace in Orlando. 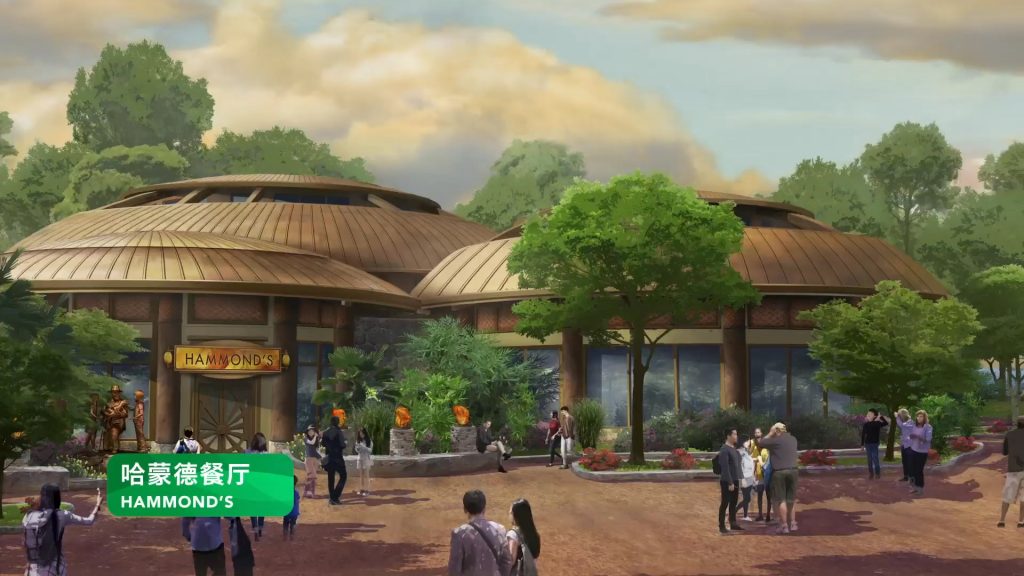 Hammond’s will be an upscale dining location within Jurassic World 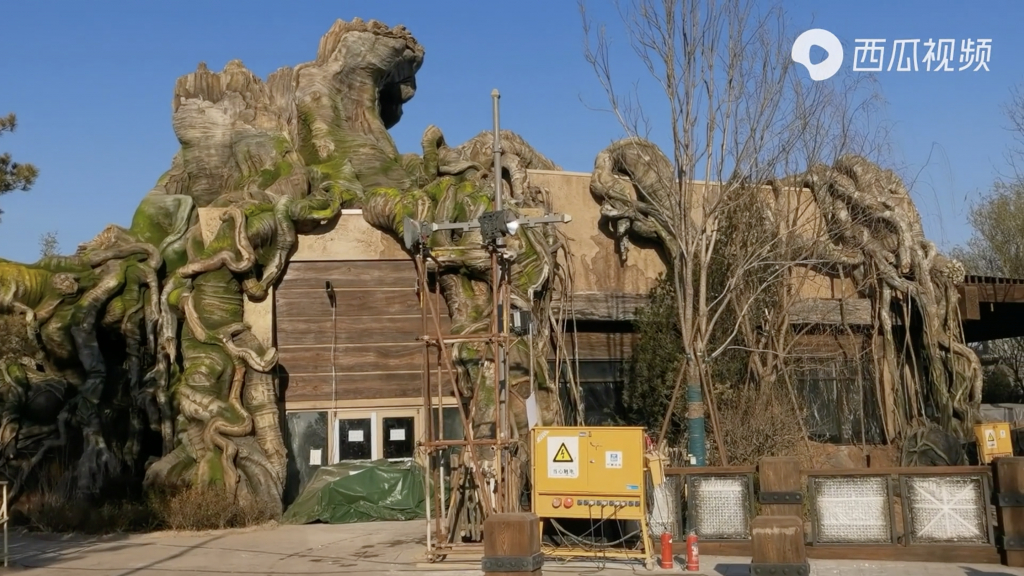 Birds of Prey will be a quick service location that’s part of the aviary, featuring interior design inspired by extinct flying reptiles. Two other quick services will round out the offerings, one named Amber Ridge Buffeteria at the back of the land and another called Overlook Cafe near the right side of the land.

Like other Jurassic-themed lands around the world, this one is expected to open with a Raptor Encounter photo op, although it is expected to be themed to the raptor stables as seen in the movie, and be named Raptor Training. Similar to the Jurassic Park land in Orlando, there will be a Camp Jurassic play area for kids, but this one will be set inside of the large glass aviary. With nets to climb on, interactive dinosaur environments to explore, and hidden glowing caves, this indoor version of Camp Jurassic will unique to Beijing. 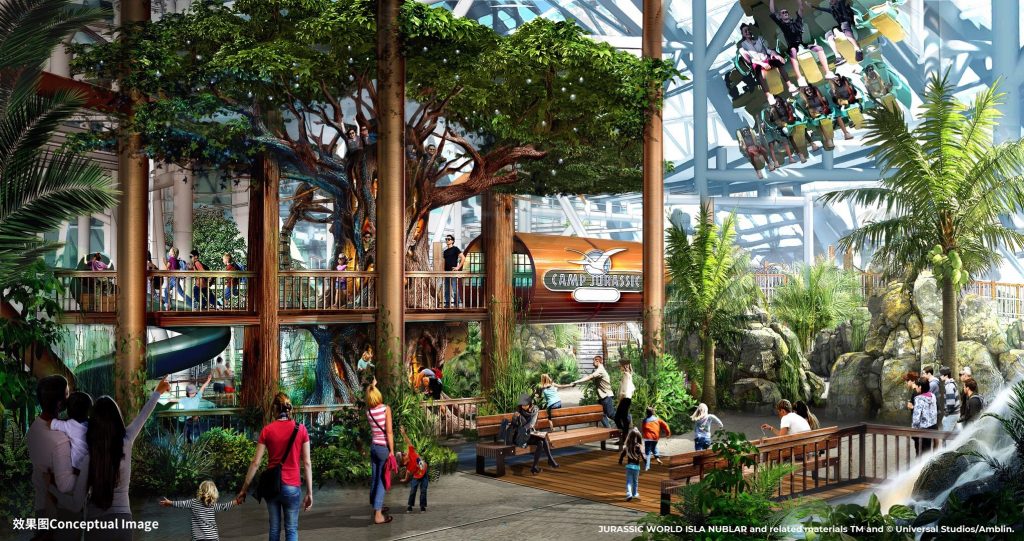 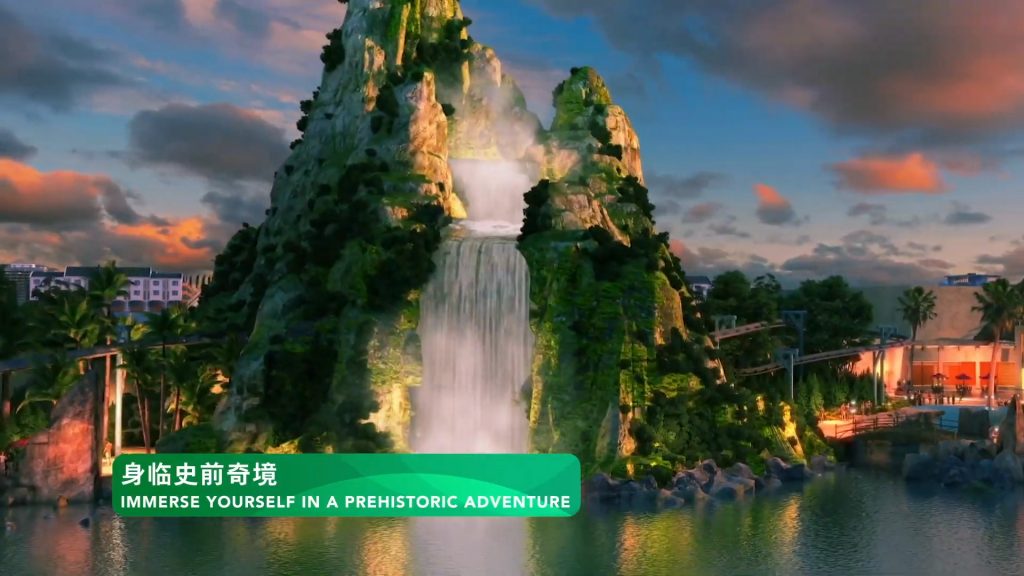 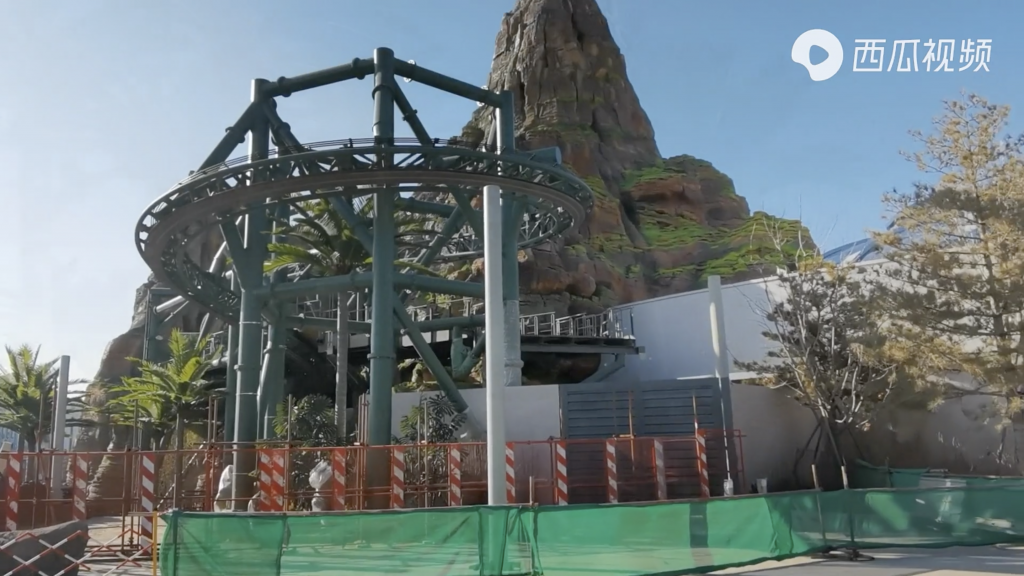 Recent construction photo of the family coaster’s track and the mountains, Source

Also unique to Beijing, will be their version of Pteranodon Flyers. Loading near the play area inside of the aviary, but then soaring out into the land and through the massive mountains, this attraction is a Mack Inverted Powered Coaster. Since it is powered, it doesn’t have to rely on gravity to push it along, and can instead act more like a dark ride. It glides along using onboard motors, but can also allow for sudden stops and powerful accelerations.

Each section of the track can set to a different speed, although this ride appears to be a (mostly) relaxing journey around the island. We only got our first glimpse of it in action in a recent video of the coaster testing. 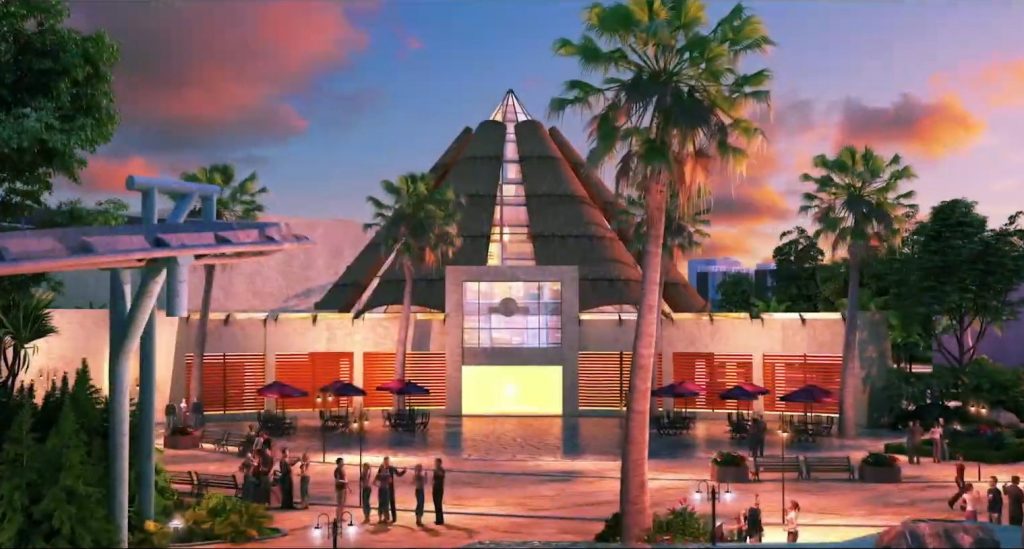 Concept art for the entrance to Jurassic World Adventure 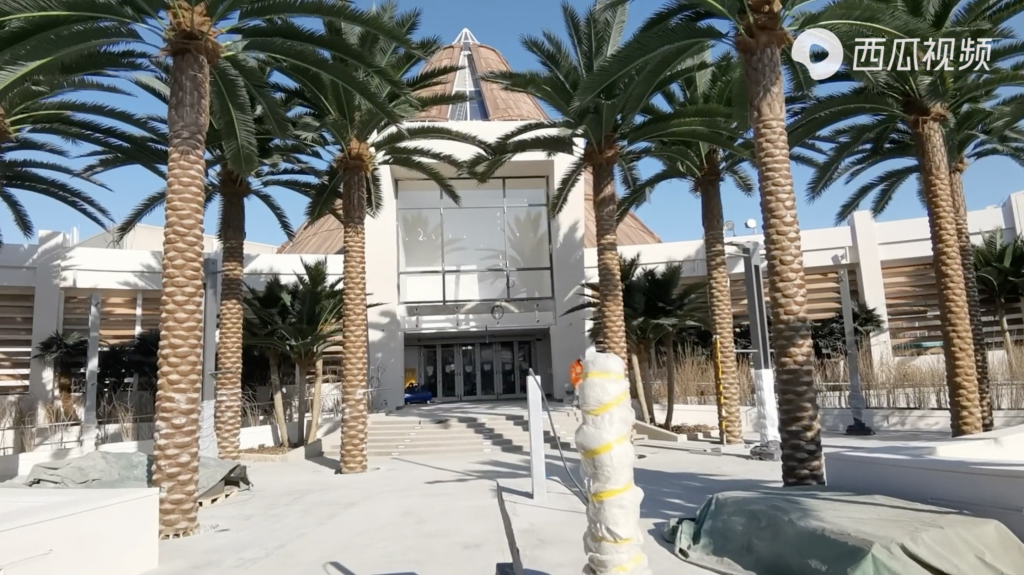 Recent construction photo of the Innovation Center facade for the dark ride, Source

The area’s main attraction will be Jurassic World Adventure. This dark ride experience has us entering the queue through the Innovation Center. The queue will wrap through the lobby—rumored to contain interactive kiosk displays—as well as the Hammond Creation Lab, just like in the movie. The ride itself will combine screen sections with inside sets designed to look like exterior areas, including the destroyed Main Street from the film’s finale, where the T-Rex and Indominus battle it out right in front of us. 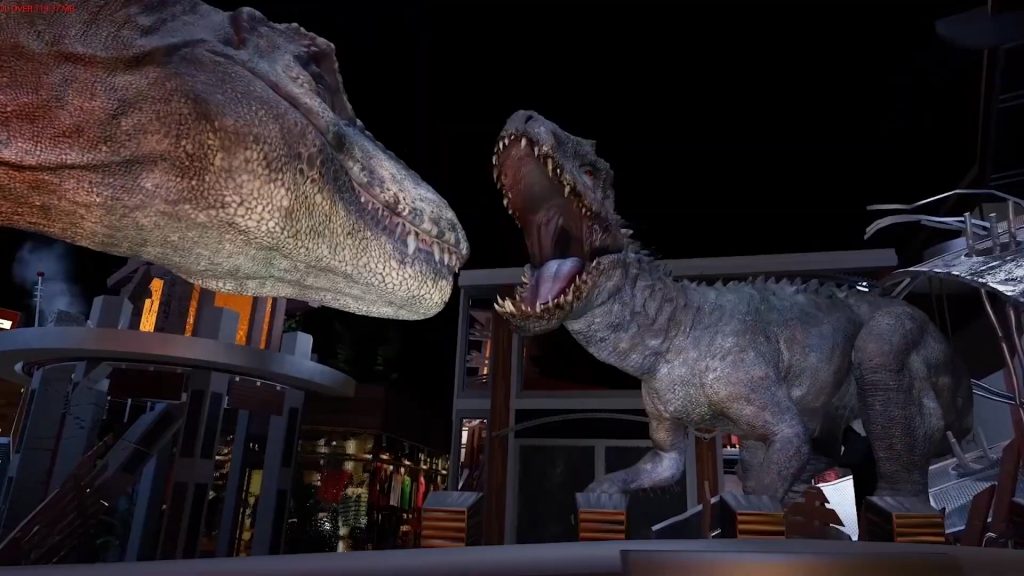 Concept rendering for a scene from the Jurassic World Adventure ride

Jurassic World Adventure was originally being designed to utilize an all-new ride system. It was rumored to have been a suspended ride vehicle that would’ve looked similar to the Gyrospheres in the film. Unfortunately, that ride technology reportedly never worked out, so they opted to utilize the same tracked ride vehicles that were first seen on the Spider-Man ride at Universal’s Islands of Adventure instead. 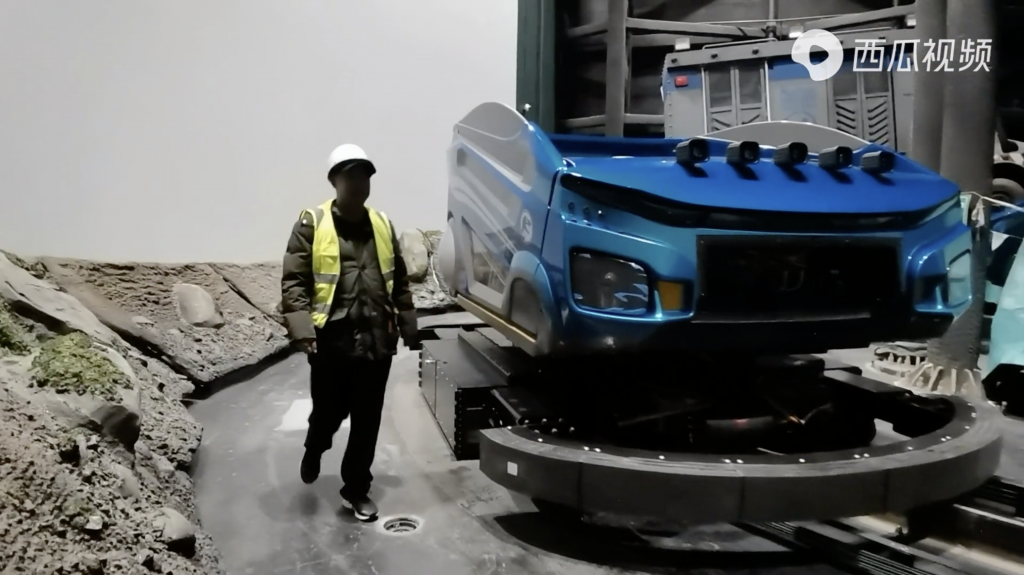 This is also the same ride system in use in the Transformers ride, which incidentally is also located within this same theme park. Despite using the same ride vehicle, this attraction will utilize more physical locations and animatronics than Transformers: The Ride. Plus, the Jurassic World dark ride is not expected to feature 3D glasses. While there will be some scenes that will be screen-based, they may be projected onto curved or dome screens, which could create an immersive effect without the need for 3D glasses. 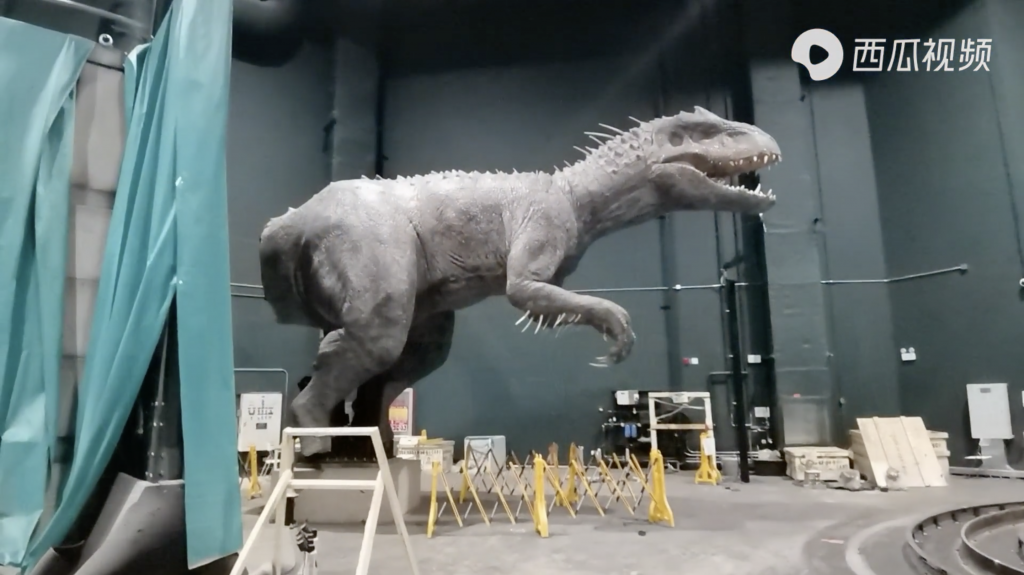 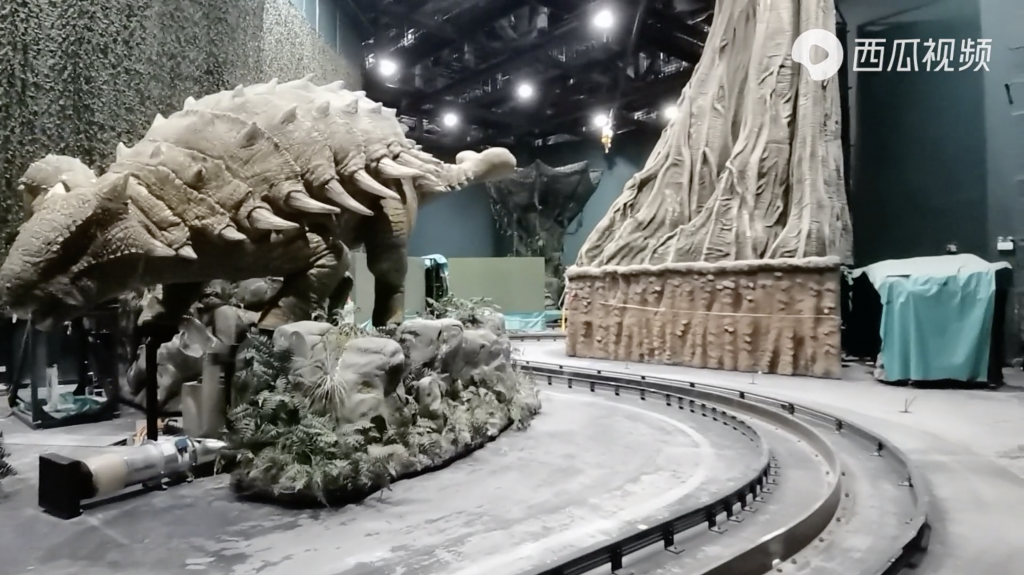 Thanks to some behind the scenes photos, we’ve been able to get an early look at the progress of this attraction. The full-size animatronics seem pretty impressive so far, but the amount of physical scenes versus screen-based elements are still unknown. Of course, this attraction will exit through the gift shop. 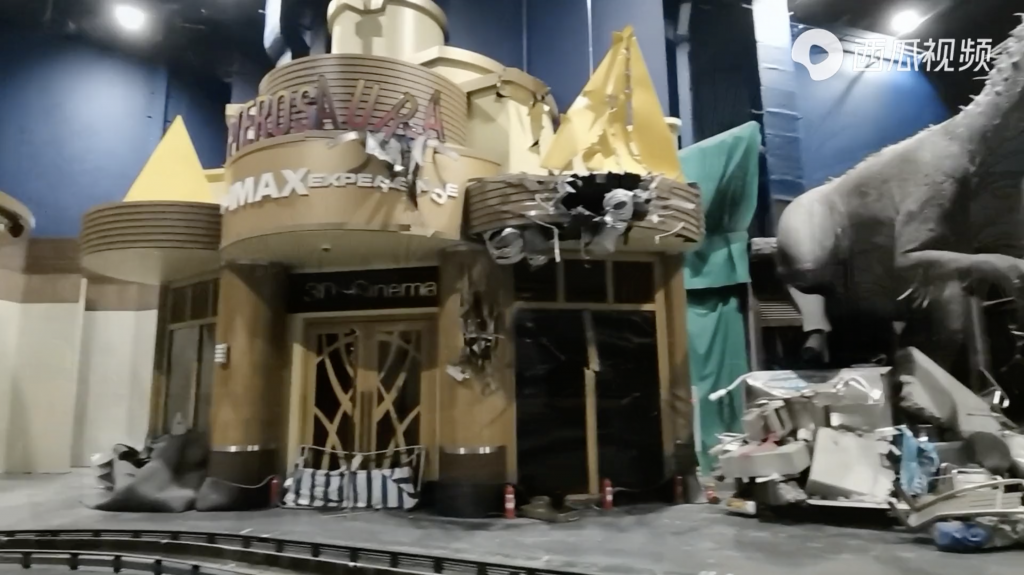 Earlier this month at a virtual investor’s conference, NBCUniversal CEO Jeff Shell confirmed that the new Universal Beijing Resort is still on track to open in 2021. An exact opening date has not yet been announced, but was previously advertised as opening next summer. 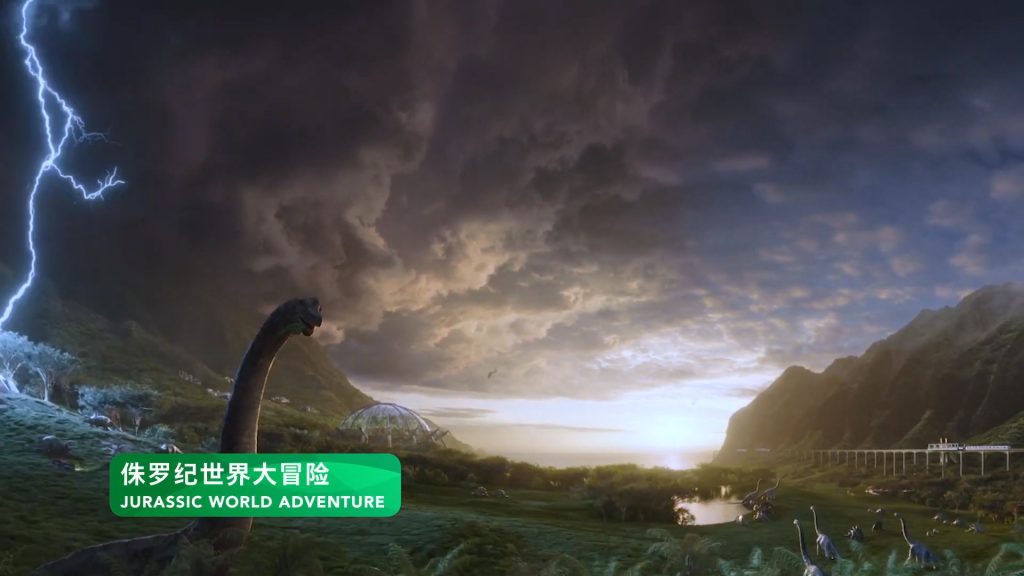