In breaking news for the Jurassic World VelociCoaster, being built at Universal’s Islands of Adventure, we’re not only getting a better look at the unwrapped dinos inside of the ride, but some new raptor statues have just been installed near its entrance!

Thanks to some new aerial photos from Bioreconstruct on Twitter we’re able to see into a now lush jungle environment inside of the raptor paddock area of the ride. And thanks to photos and video coming from guests inside the park today, we’re seeing new statues installed outside the attraction. Let’s dig into this breaking news! (Top two photos by thecoasterkings.com.) 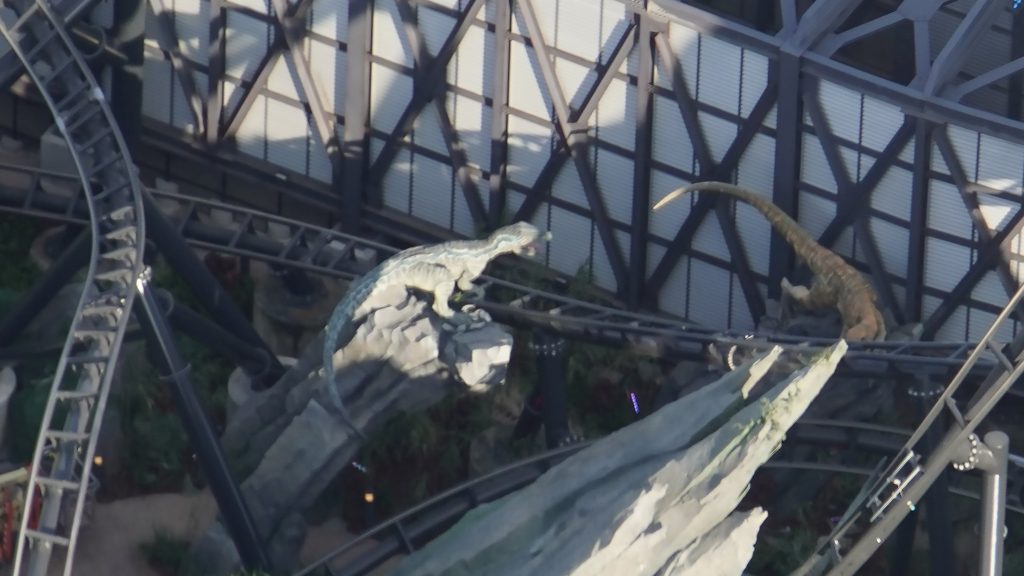 Blue and Echo roaring at the track on the VelociCoaster, Photo: @bioreconstruct

Just this morning guests inside of Islands of Adventure were granted a sneak peak at Jurassic Park’s newest arrival, some more wrapped velociraptors. As you can see in the short video below, the figures were brought in on a flatbed, wrapped in plastic.

@bioreconstruct Newest raptor being delivered to Jurassic World VelociCoaster!!! Raptor had #4 on its head to this has to be one of the last Raptors left to install. pic.twitter.com/IaXF0pwWsZ

While some were theorizing that these figures could be added to the others we had previously seen brought into the ride area, others suggested they could be some of the statues we found in the concept renderings. These statues were located above the ride’s entrance in the officially released concept video, as seen in the image below. 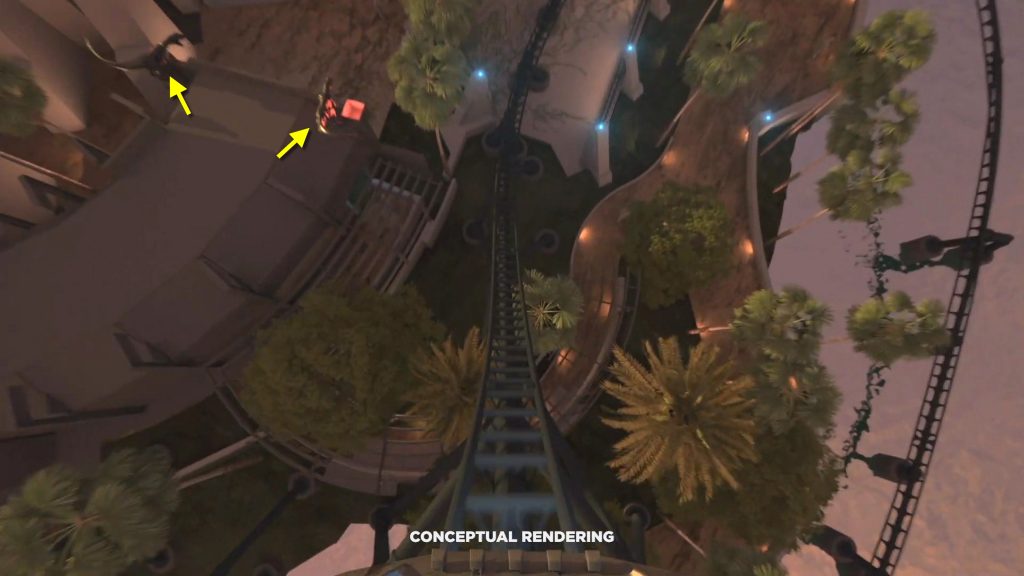 Just a few hours after they arrived, we no longer needed to guess, as two raptor figures have now been installed above the coaster’s future entrance, as seen in the tweet below.

Talk about making an entrance!

Raptors have been added above the entrance of Jurassic World VelociCoaster, which opens this summer at Universal's Islands of Adventure. 🦖🥲 pic.twitter.com/EAHuRrbMHF

Now, these figures are different from the ones on the ride. For one, they do appear to be smaller than their full size counterparts. Also, they are not intended to look real. As opposed to the ones on the attraction, which feature color patterns like the raptors seen in the Jurassic World film, these are more likely meant to resemble metallic or stone statues.

Zooming in on the image, below, we can see some part of the statue on the left that has the plastic coming off, and it does appear to look like a dulled metallic or stone color. 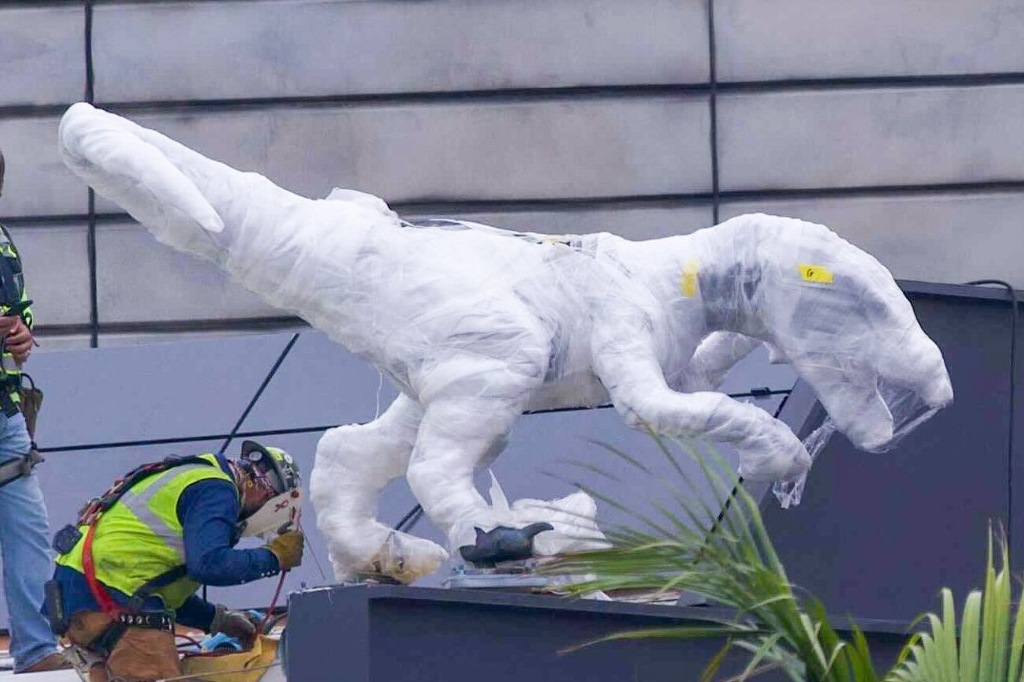 We can also see some holes in the entrance area, in the image below, which could mean the ride’s marquee may be installed soon as well! 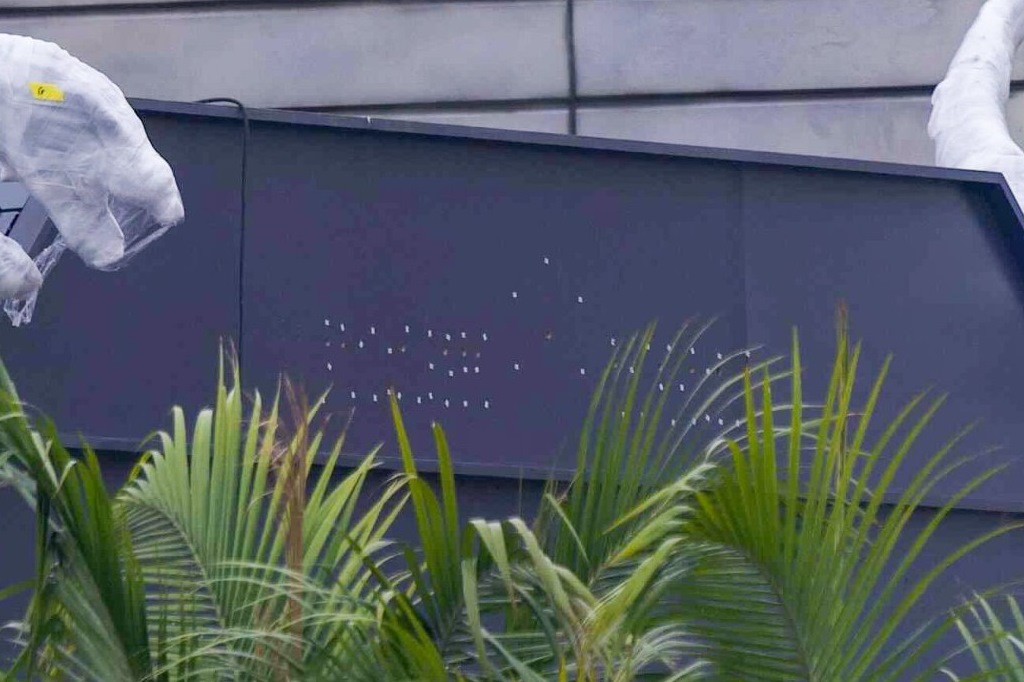 Earlier in the day there were rumors of up to 8 dinosaur figures being brought into the ride this morning. That would be in addition to the 4 raptors we already know are installed near the track!

More raptor figures are being installed around the Jurassic World VelociCoaster near the bypass bridge that connects Jurassic Park and the Lost Continent. pic.twitter.com/VRSi89CRaJ 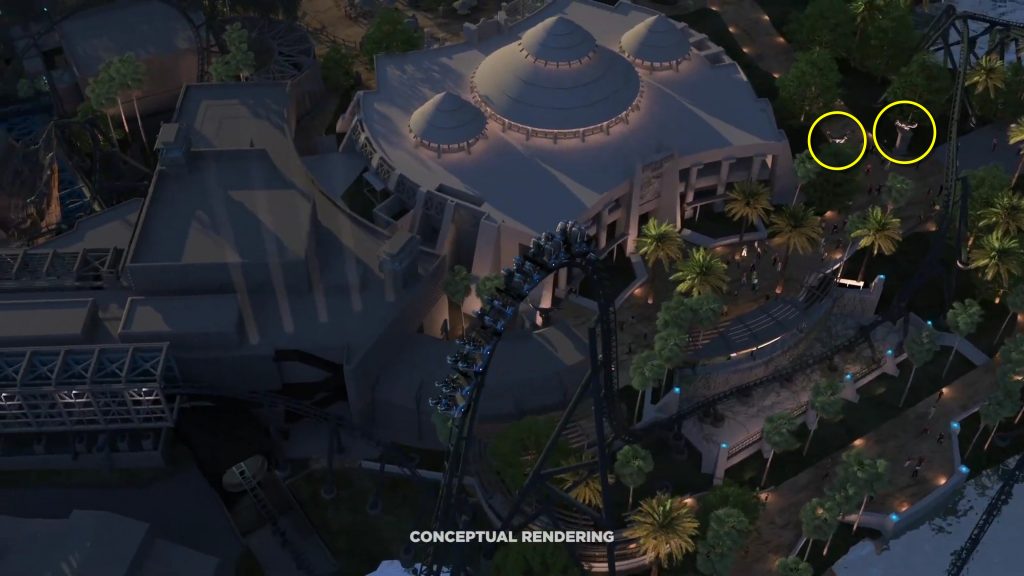 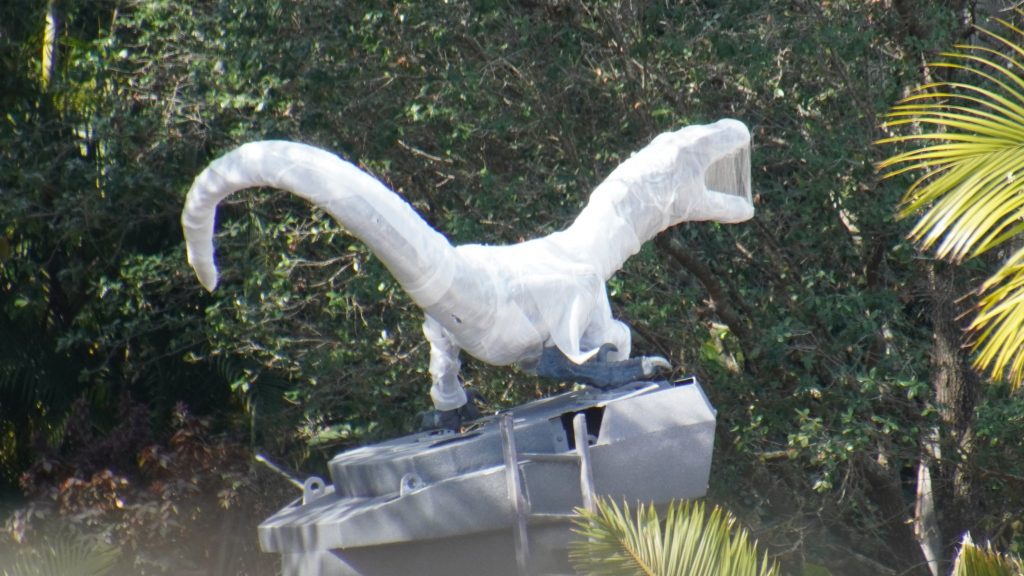 Closer view of one of the raptor statues on a pedestal, Photo: @bioreconstruct

There have been rumors for some animatronic raptors in an area themed as the stables from the film, likely visible to guests waiting in the new ride’s queue. That could account for more of today’s possible delivery.

Plus, there was that rumor from last year of a couple figures being included in the ride’s finale. Unfortunately, that section of the attraction along the final brake run is now fairly enclosed, so it’ll be hard to spot whether or not any have been added there.

Blue and Echo roaring at the track on the VelociCoaster, Photo: @bioreconstruct

Now, looking at recent aerial photos from bioreconstruct on Twitter, let’s check in on all four raptors on the ride itself, now that they have been unwrapped! 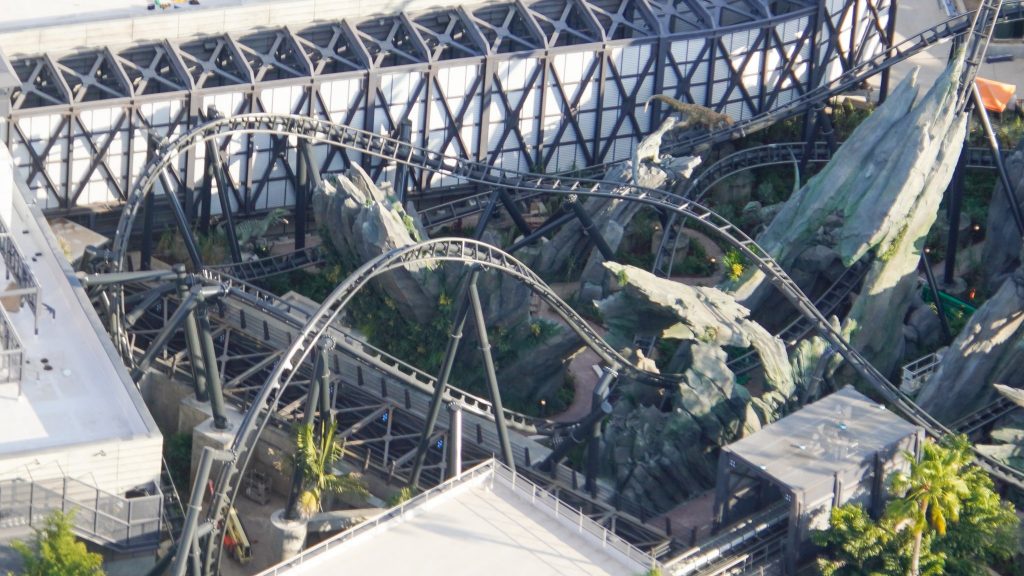 There are 4 raptors visible in this photo, can you spot them all? 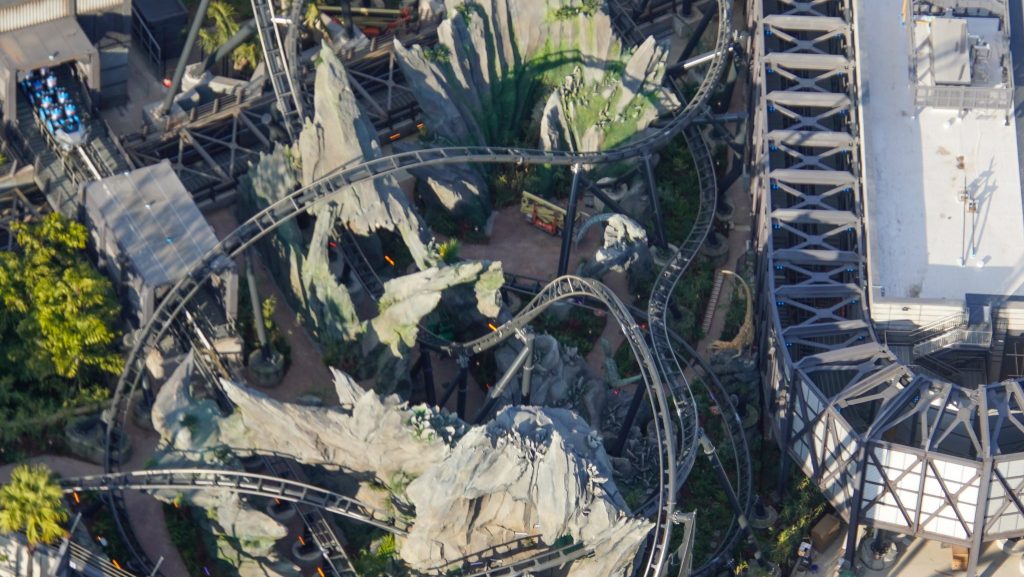 Another angle showing all 4 raptors, but one in the back is a little hard to find! 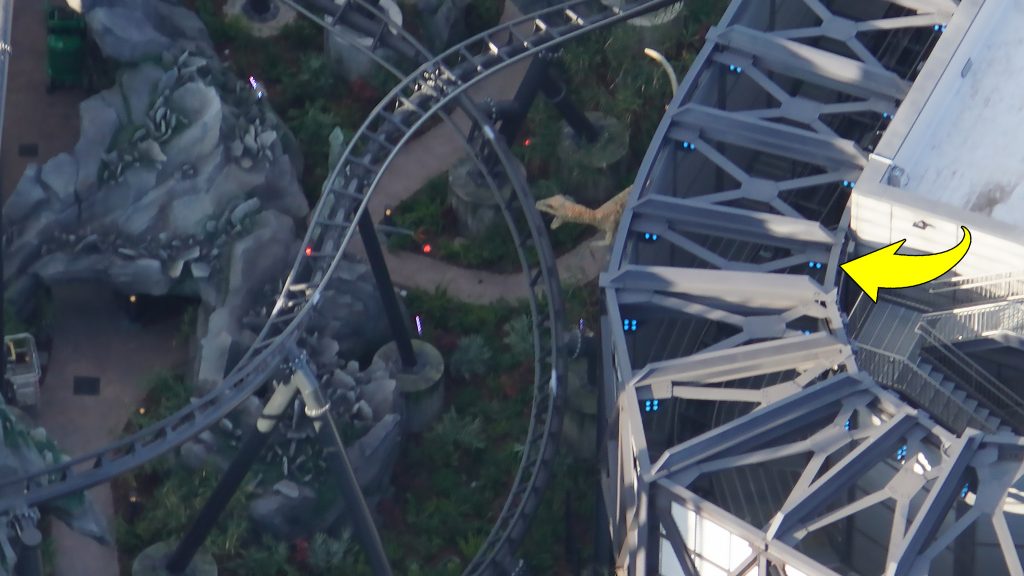 Closer view, arrow pointing to themed lighting along final turn for the ride

While the four raptor figures we can see around the track do not appear to be animatronic, and will likely not move, there are rumors for some sort of animatronics to be placed elsewhere. It’s possible we could see moving figures with their heads in the muzzles at the stables as seen in the Jurassic World film. This is still just a rumor at this point though. 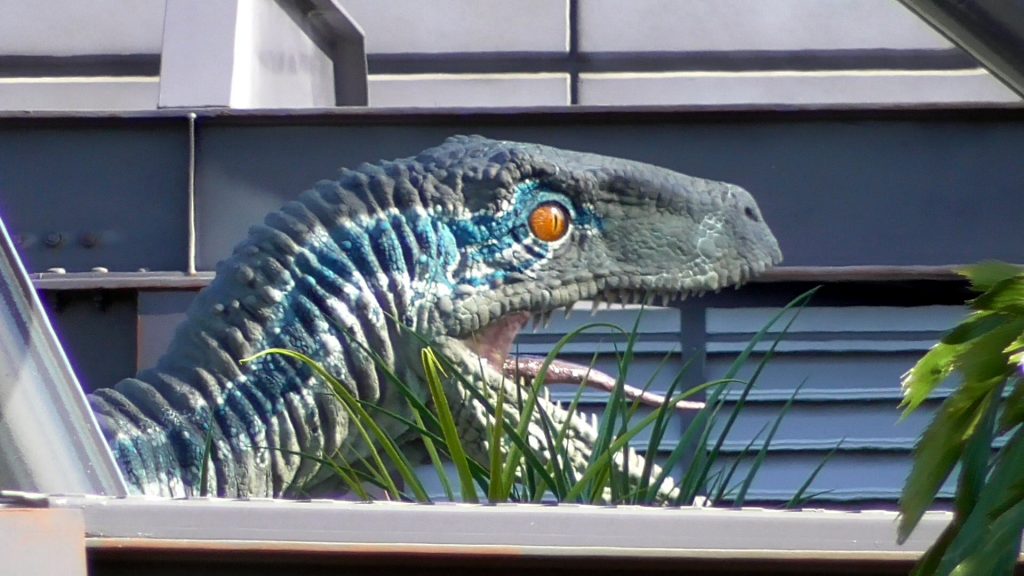 View of Blue as seen from the ground, Photo: Alicia Stella 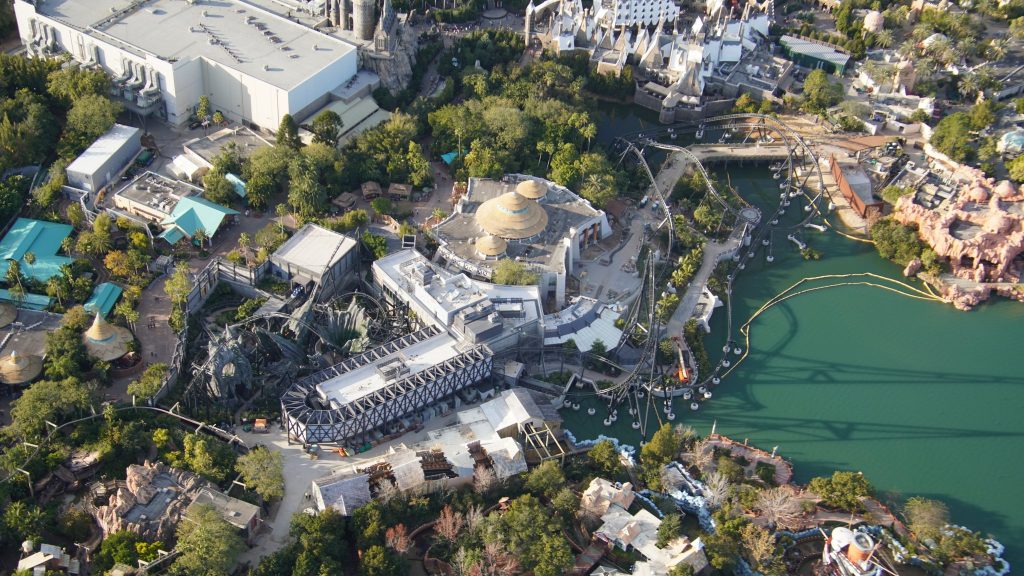 Before we go, here are a couple photos showing off some amazing show lighting tests for the coaster. They are still tweaking the LED lighting’s RGB settings, and the lighting seen in these photos may change as they get it perfect. You can see that they now have colored lighting pointed at the beautiful rockwork around the paddock area. 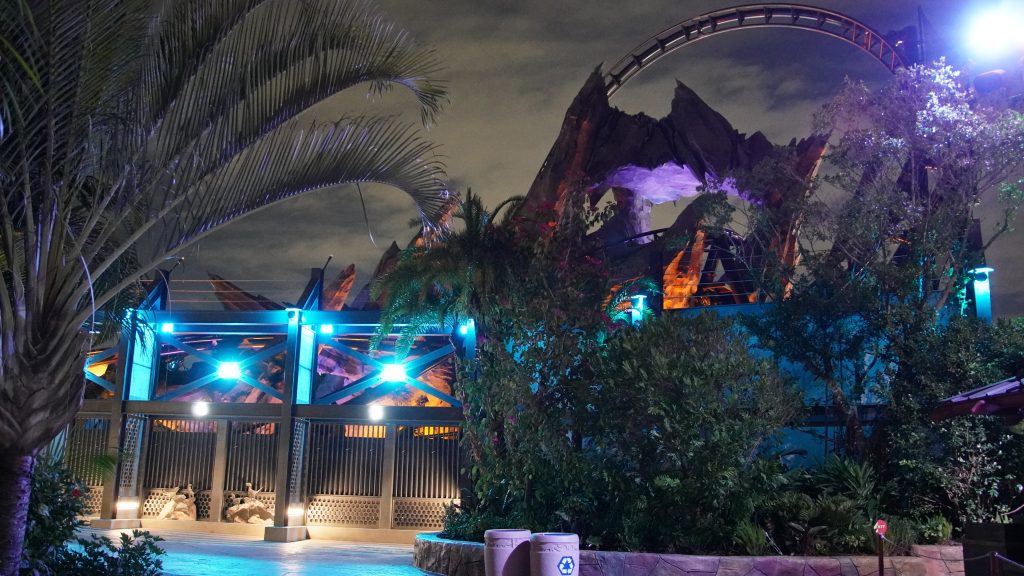 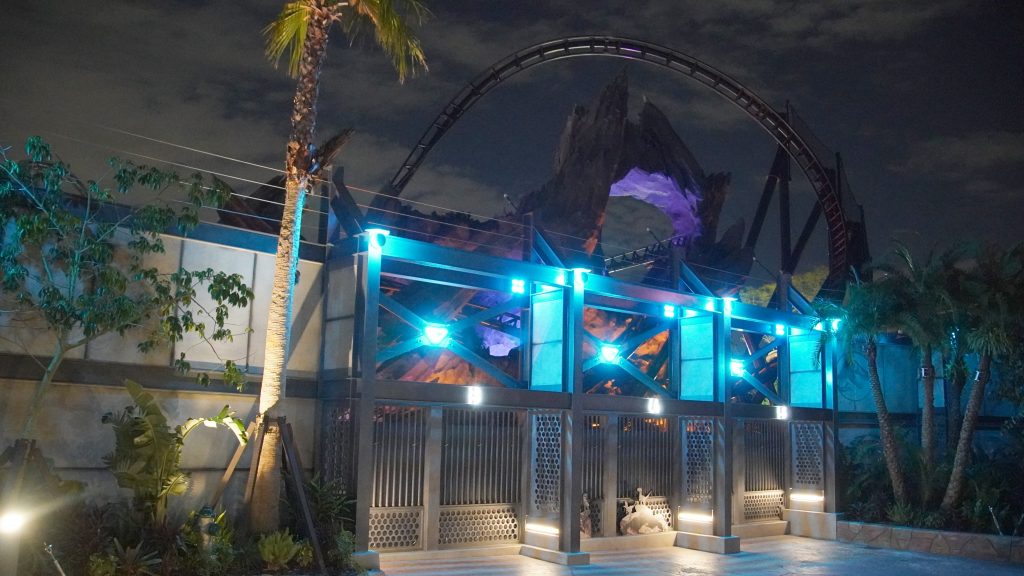 We posted a another update earlier this week with more information about testing going on and more construction that was recently completed. Be sure to check that out as well, or see the video below!

The Jurassic World VelociCoaster is set to open this summer at Islands of Adventure in Universal Orlando. Stay tuned for news about this attraction as it happens!