If you’re like me, sometimes you might find yourself getting lost digging into patents and researching permits to help pass the time and escape from the problems of the world. No? Just me? Today I wanted to share some details for the rumored AR Binoculars that are expected to be located throughout the lands of Super Nintendo World.

When Super Nintendo World opens at Universal parks around the world it will be filled with a tremendous amount of interactive elements. In addition to the Power Up Bands and interactive games in the land, there will also be binocular stations you can look through to see additional characters and elements. Let’s dive into this technology to learn how you’ll be able to view and interact with the video game world yourself. 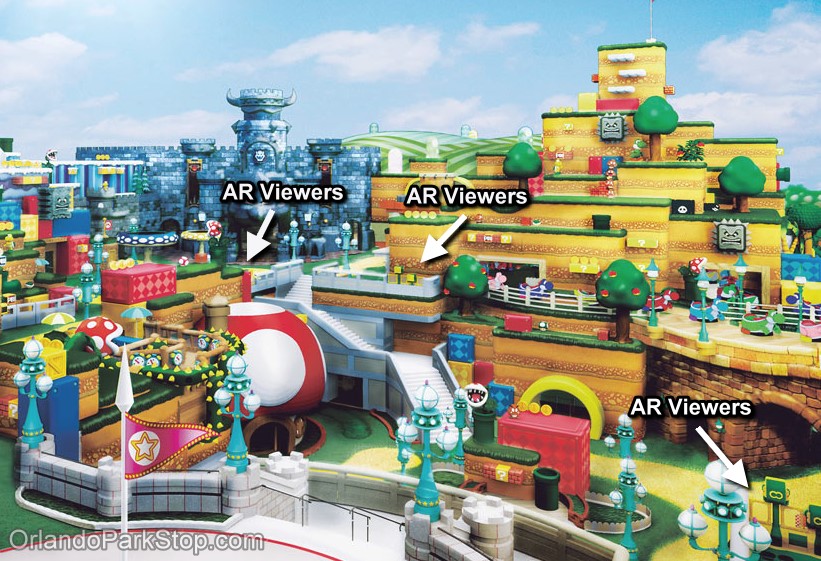 Located in several spots along the second level of Super Nintendo World, these AR Binoculars will allow guests to view the real world, and even zoom in on objects in the distance. However, unlike regular binoculars, additional elements and characters will be overlaid on top of reality as well. Imagine looking through and seeing Mario jumping around the tower in the distance, or additional bad guys flying around in the sky. That may just be the beginning!

Based on the Binoculars (sometimes called Telescopes) from the Super Mario 3D Land video game, the design for these podium devices will include a green platform with footprints where guests can stand to look around. While the video game counterpart used the gyroscope in your Nintendo 3DS to look around, here you will be able to swivel and tilt the binoculars in real life. Just like in the video game, there may even be a method for zooming in. 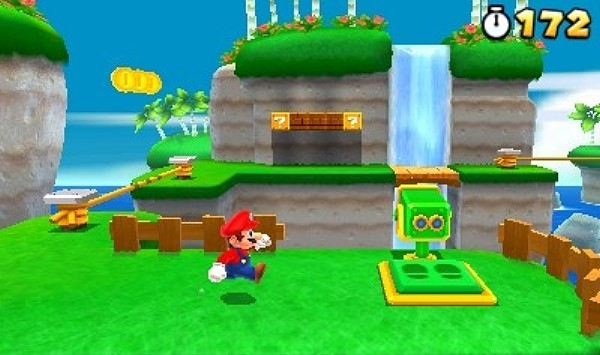 Binoculars in the video game (Source) 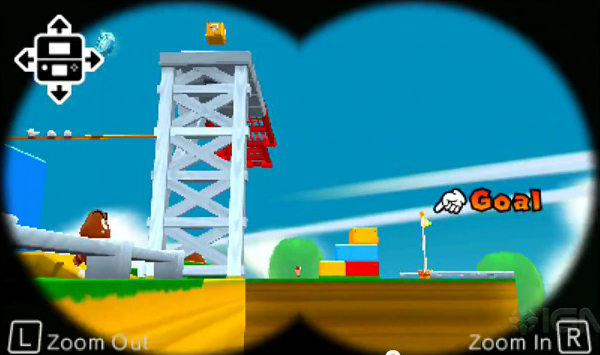 Looking at the patent, which is called “Mixed reality viewer system and method,” and was recently filed by Universal in February, we can see a remarkably similar design used in the images. This mixed reality viewer would include a display device, a user interface with a zoom control, and at least one camera. The patent states that this technology is specifically for use in theme parks, and could create a more personalized or customized experience for guests. 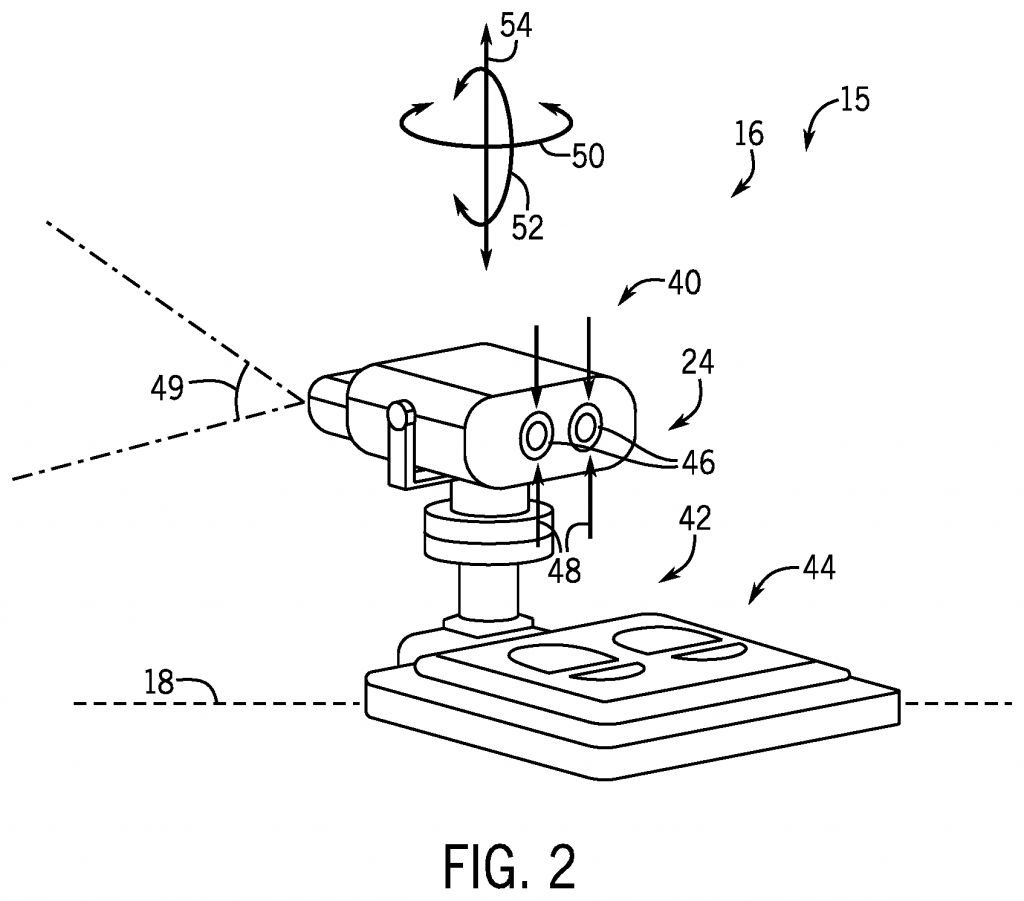 The patent describes the device as being fixed to a steady platform or to the ground itself. The viewer guests look through may include one or more displays, and it could possibly be large enough that guests behind or next to the main user could also see what they are seeing at the same time. Speakers may also be included in the podium. The user can change the angle of view by rotating or tilting the viewer portion. And, the user can use some sort of controls to zoom in or out, which is where this technology really gets interesting. 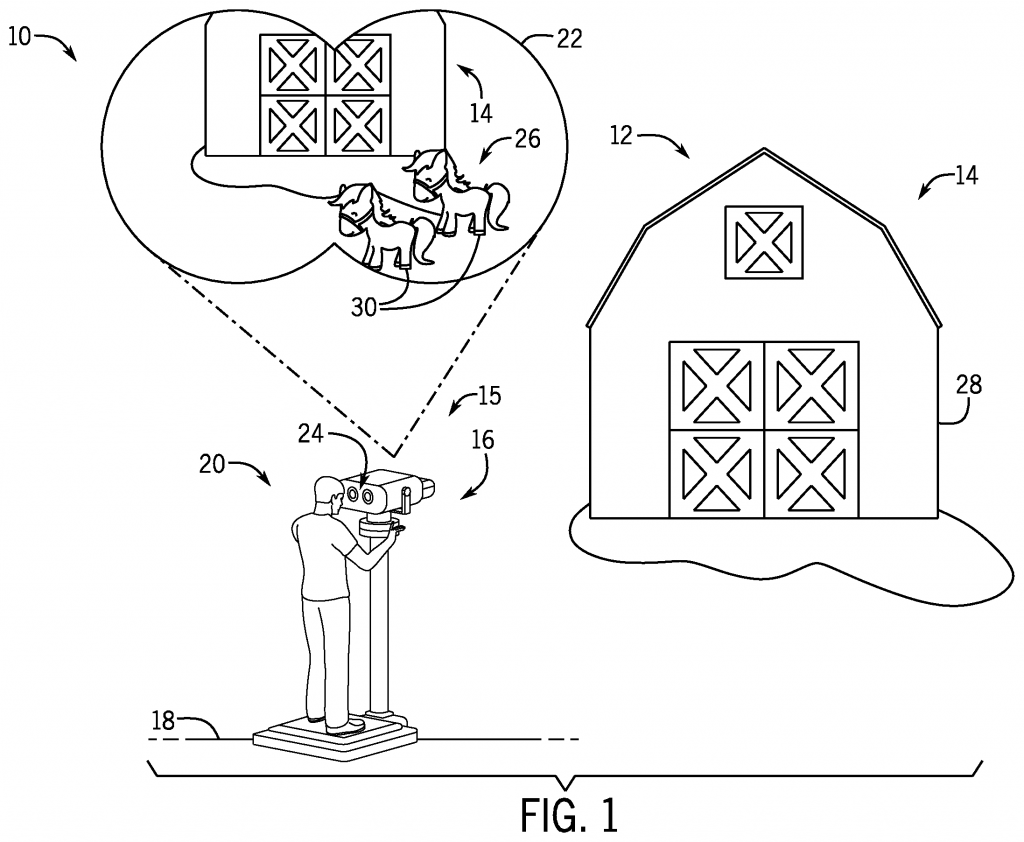 The images included in the patent illustrate how an amusement park could include fixed building layouts, props, decorations, and so forth, corresponding to the theme. In the example given, the theme is a farm with a barn. The patent explains how the area could have one or more fixed AR/VR Viewers pointed towards the barn area. Guests not using the viewers would just see the barn, but someone looking through the viewfinder may see two horses standing in front of the barn.

The methods that would be used to add additional elements on top of reality is explained in the patent. It would use a computer graphics generation system, a wireless network, and a remote a data server. When the user moves the viewer or zooms in or out, the CG characters on the screen would be rendered in real time to appear as if they are actually part of the real-world environment. 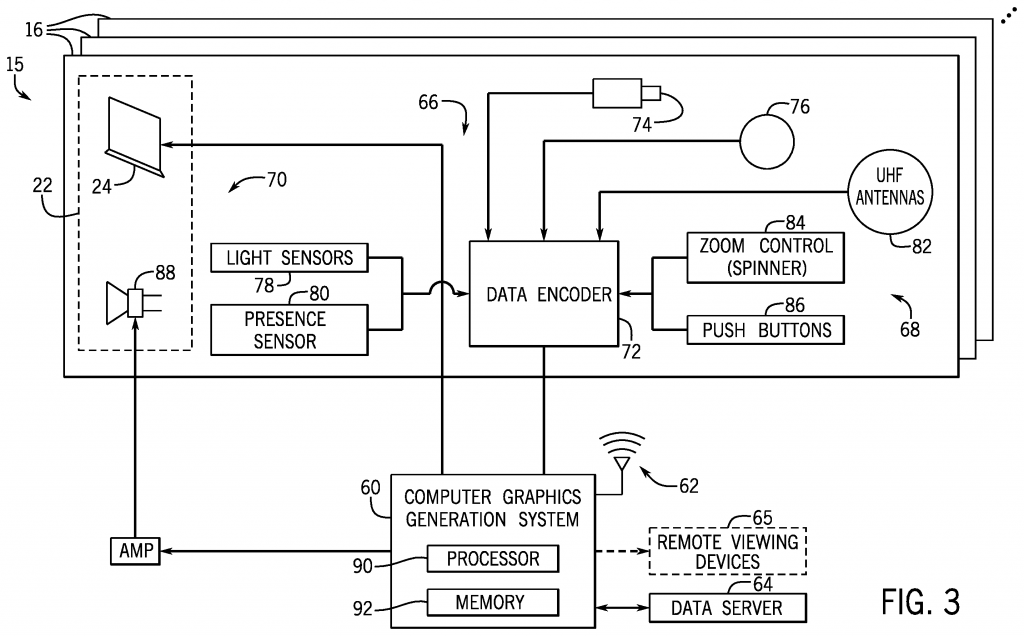 How the technology would work, explained in this block diagram (Source)

Now, up to this point we have only discussed how AR, or augmented reality, could be utilized with these viewers around the land, but the patents also mention VR, or virtual reality. The user will be able to zoom in to see objects and scenery, as well as added items added on top, but there’s another way that the zoom controls could be utilized. In the example given, when the user zooms in far enough, they would actually be able to see inside of the barn!

This is when the technology being utilized switches from AR to VR. Most of the time what you’ll see through the view will be real life, as seen by a camera, with additional elements added on top, once the user zooms ALL THE WAY in, everything in the viewer will be rendered completely from scratch. The patent says that “zooming beyond a predetermined magnification threshold [would cause] the computer graphics generation system to generate VR graphics.” A transition effect would be used to seamlessly zoom from augmented reality to virtual reality. 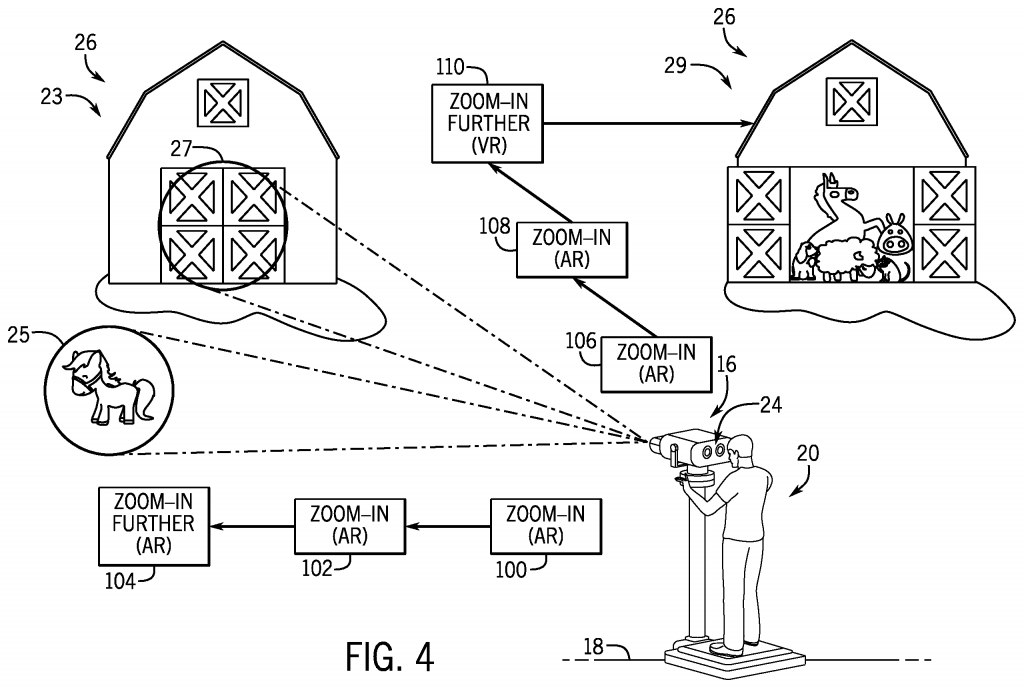 So, how could this technology be used within Super Nintendo World? Imagine a scenario where you are using the binoculars to look around the land. You can zoom in to see additional bad guys flying around. You see characters jumping and running in the distance. But, you might also be interested in locating power-up, coins, or even hidden achievements to help you earn points or unlock more experiences.

If you’re participating in interactive games around the land, these mixed-reality viewers may help you spot hidden items by peering through walls across the way. Zooming in on every square inch of the land through the viewers could be a great way to help find missing keys you’ll need to move on to the next level of play! And even if you’re not particpating in the Power Up Band interactive experiences, it’ll be a neat way to view the world and feel more immersed in the video game land. 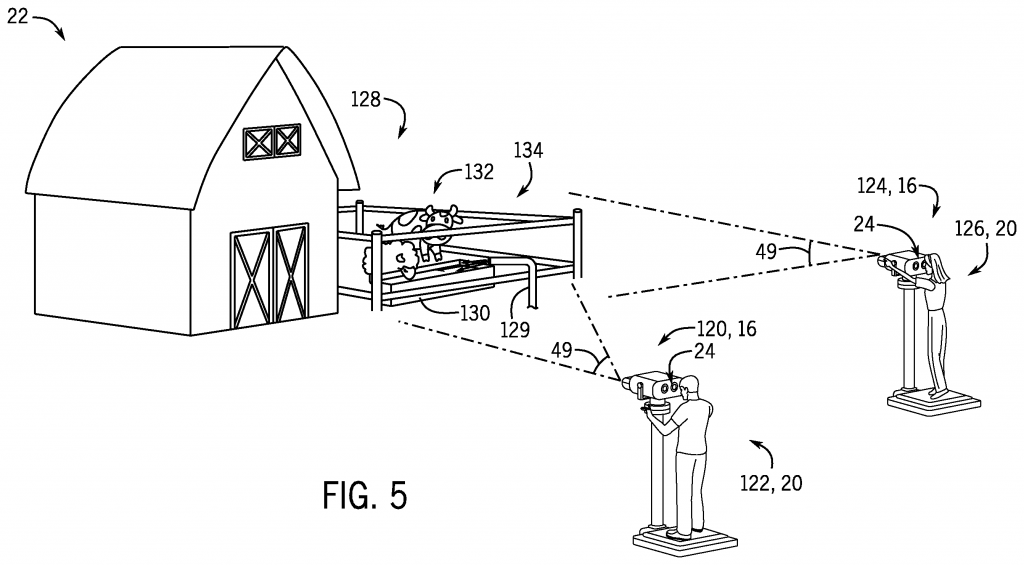 Multiple viewers could see the same imagery at the same time, but from different angles (Source)

The technology behind the concept is unique in that the data would all be generated from a centralized computer. That means that multiple guests could be looking at the same computer-generated characters at the same time in the land, but as seen from completely different vantage points. This may even create some sort of interactivity or gaming scenarios where users can work together or compete against one another while completing a virtual task.

An example is given where users must virtually fill a water tank by using a button while their view is zoomed in on the tank in real life. After the tank is filled, the guests would be rewarded by seeing a virtual response, such as a computer-generated animal drinking from the tank, or, even a real-world consequence, such as guests in the area being splashed with real water. 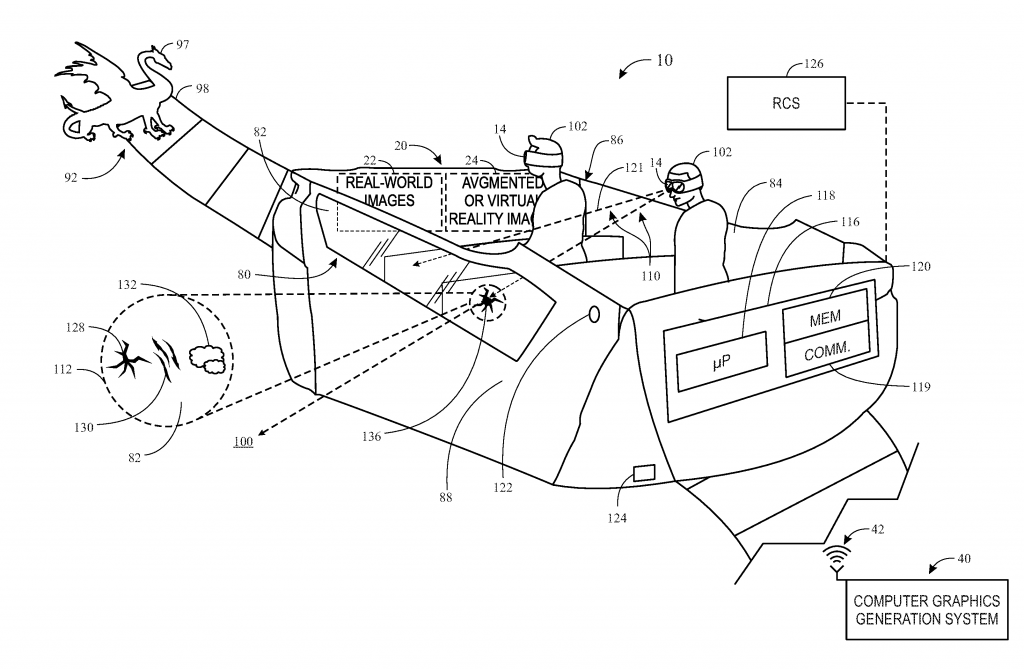 This patent for augmented reality wasn’t the first one filed for Super Nintendo World. It is has been rumored for awhile that the Mario Kart ride would incorporate AR goggles in some way. The AR goggles may add additional elements like characters, special items, or even damage effects to your car or your opponent’s car. The Mario Kart ride is still expected to be a real dark ride with physical sets and animatronics, but the AR technology could enhance your experience by adding an interactive aspect.

Super Nintendo World was scheduled to open this summer at Universal Studios Japan—and in Hollywood in 2021, followed by Orlando around 2023, and Singapore by 2025—however, with the parks closed to help prevent the spread of the Coronavirus, opening dates for these lands and attractions may be in flux. It does appear that work is continuing on the construction of the land in Japan, despite the park being closed.

Check out our previous story all about the technology behind the Power Up Bands and interactive games for the land. Be sure to subscribe to our news feed or enter your email address below to never miss an update as we continue our coverage of Super Nintendo World! Patent Images: U.S. Patent and Trademark Office | Official Photos: Universal Studios Japan