What started as a joke tweet during the Team Member previews for this year’s Halloween Horror Nights at Universal Orlando quickly exploded into an instant internet sensation.

The little jack-o-lantern known as “Lil’ Boo” has taken the fandom by storm. From fan art and fan-fiction to homemade buttons, pins, and t-shirts, Lil’ Boo rapidly swept through the HHN community during the 2021 season. But how did this all start?

Let’s dig into the timeline for Lil’ Boo’s meteoric rise to power, from its humble beginnings being carved for a scare zone in 2017, to its cult-like status in 2021, here is the story of Halloween Horror Nights 30’s true icon, LIL’ BOO. 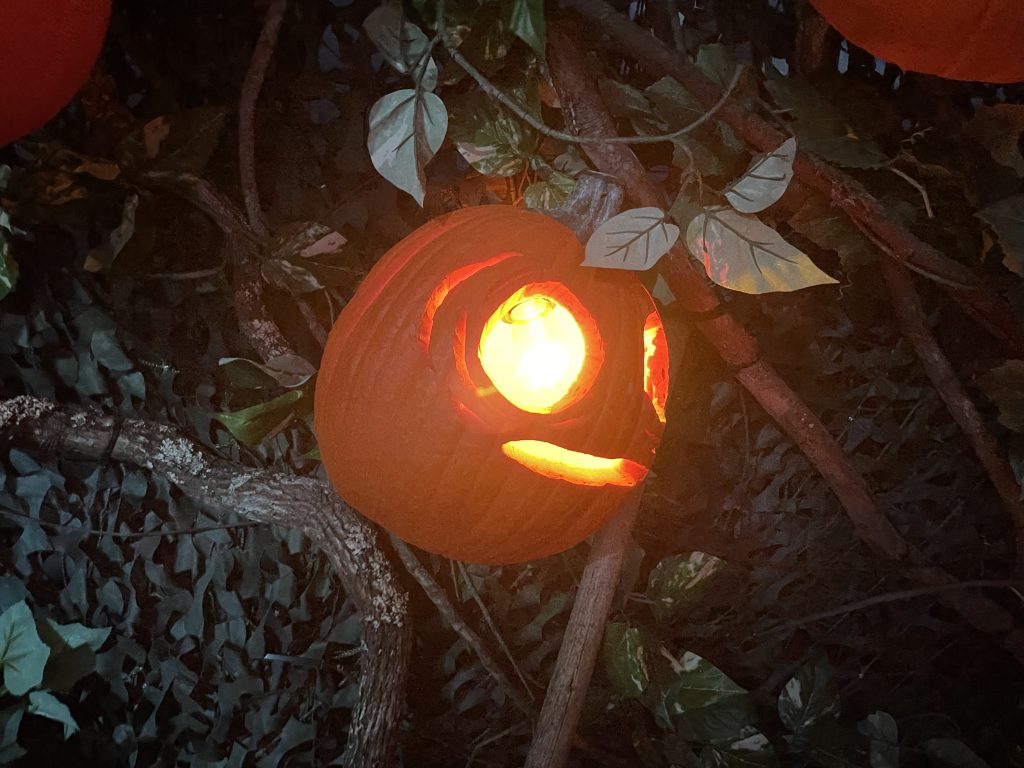 In case you’re unfamiliar, Lil’ Boo is the name given to a particular pumpkin that can be found on the facade for the “Wicked Growth: Realm of the Pumpkin” haunted house at this year’s Halloween Horror Nights at Universal Orlando Resort.

While there are dozens of different carved pumpkins set up along the entrance to this haunted house, this one happened to stand out. For the first few weeks of this year’s event, guests would share selfies with Lil’ Boo, only helping to drive its celebrity status higher.

I found my favorite pumpkin. I have claimed him and he is mine. #HHN30 pic.twitter.com/knI89DGMZ7

It started innocently enough. A tweet from @TheConnorWeb was posted on August 31, 2021, during a Team Member preview for Halloween Horror Nights 30. As he approached the facade for Wicked Growth, Connor took a photo of a pumpkin that caught his eye and tweeted it out. He expected others to select their favorite pumpkin, posting photos of other choices, but to his surprise, everyone seemed to latch onto his selection.

“Haha yeah,” Conner said, looking back on that night, “My thought was ‘ooo I’ll just take a picture of my favorite pumpkin and claim one, maybe people will pick their favorite too.’ Little did I know it would turn into everyone falling for the pumpkin I claimed haha.”

Just two minutes later, the official Halloween Horror Nights Orlando Twitter account replied to this tweet, which was already picking up steam. It was in this moment that the name “Lil’ Boo” was born.

In these first few moments, memes were born, someone asked for a sticker featuring Lil’ Boo’s face, and one user exclaimed: “I would die for lil’ boo.” What could’ve easily been a one-off tweet thread that started and ended that night, before the main event had even begun, would turn out to only be the start. 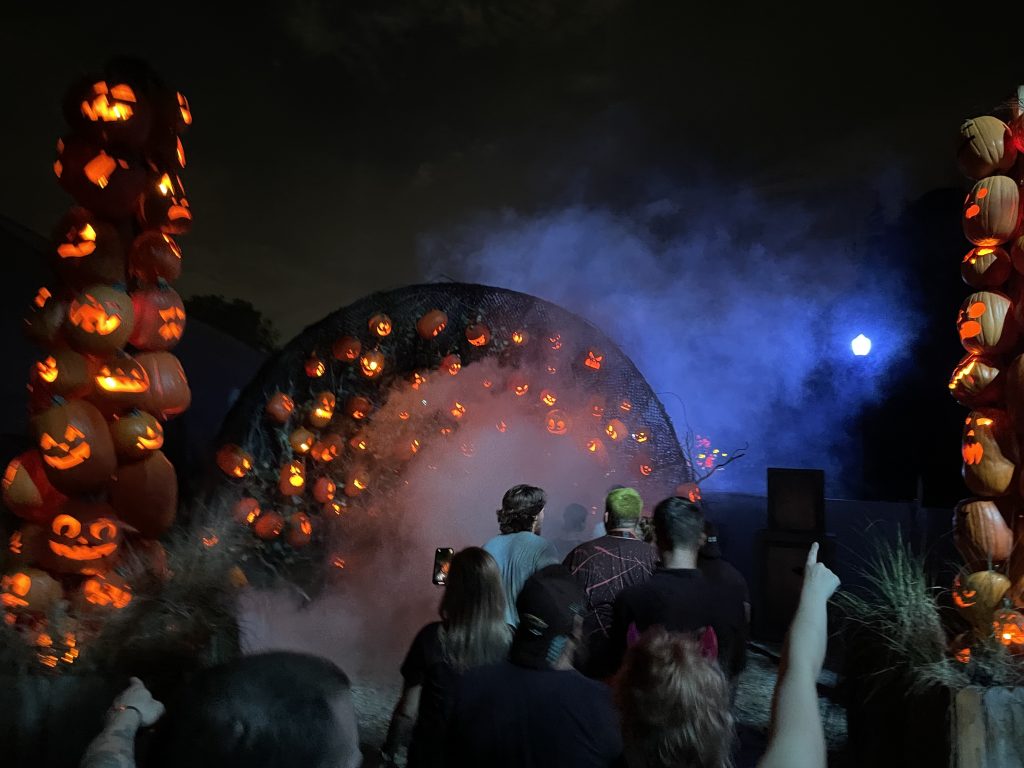 Entrance facade for Wicked Growth, where Lil’ Boo can be seen in 2021

Visual artist and sculptor Emory Alvarado, of Emory Arts, was working with a scenic shop back in 2017 when her department was tasked with creating dozens and dozens of carved foam pumpkins for that year’s “Trick ‘r Treat” scare zone at Universal Studios Florida.

Emory has worked on theme park fabrication projects for lands at Universal Orlando and Walt Disney World, including for The Wizarding World of Harry Potter and Pandora—The World of Avatar. Today she works full-time as a freelance artist. 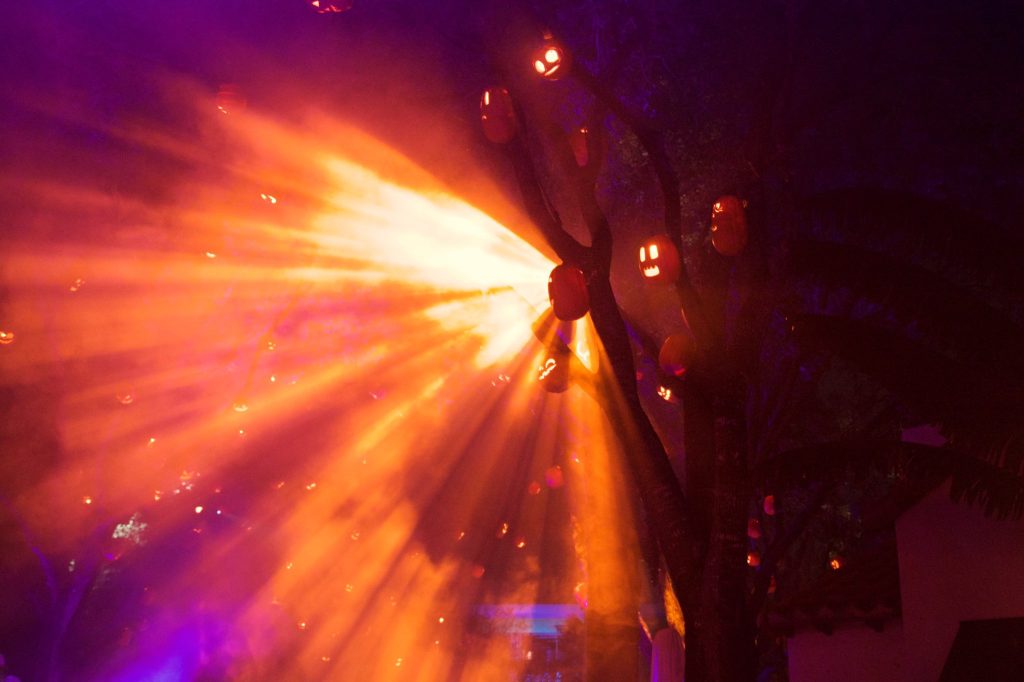 We recently sat down with Emory on the ParkStop Podcast, where she explained what the experience of creating Lil’ Boo, along with all of the other carved pumpkins, was like back then.

“We were watching Trick ‘r Treat while we were sculpting these pumpkins,” Emory explains. “There were so many pumpkins… There were boxes upon boxes of different sized fumpkins, the foam ones. And these mugs are thick, they are about an inch of dense foam, so you really have to sculpt with care, but with depth… Not like the Michael’s ones [store bought]. Those are like only a 1/4 inch thick.”

Emory told us about her motivation behind this particular design: “I actually got in trouble, because I was carving too little, because I was taking such detailed time… I think Lil’ Boo was birthed from my exasperation of carving so many pumpkins, because it wasn’t my first.”

While the carved foam pumpkin we know now as Lil’ Boo may have gotten its start in a scare zone in 2017, it’s likely it was also used in other settings in the years since. These carved pumpkins have been used again in other scare zones, haunted houses, and even HHN Tribute Stores.

As to why Lil’ Boo, and his trademark concerned expression, may have caught on in 2021, Emory has a theory.

“People just gravitated to Lil’ Boo’s face, I think partly because of how everyone’s feeling as a result of the pandemic… Lil’ Boo is like Halloween coming back, and people being like, wow, are we actually celebrating it this year? I hope so! And that anxiety is where Lil’ Boo comes in.”

Almost immediately after Lil’ Boo’s name was coined by the official Halloween Horror Nights account, someone created a Twitter account for the pumpkin. No one is quite sure who runs the account, although Emory suspects it was started by Universal Orlando themselves given the timing and other factors.

This Lil’ Boo social media account tweets random things that he seems to be experiencing, like “Someone just closed their umbrella and all the water got inside me.” Other tweets further the lore and storyline for the Wicked Growth haunted house, where Lil’ Boo sits outside.

The Lil’ Boo account often tweets about how he is afraid of the Pumpkin Lord, a character from the haunted house. These tweets help to explain the fearful expression on Boo’s face.

It's Lil' Boo's Universe and we're all just living in it. pic.twitter.com/PFacXCM7XO

Whether or not Universal Orlando runs this novelty account, they haven’t been shy about getting in on the fun. In a tweet from September 24, 2021, Universal Orlando said “It’s Lil’ Boo’s Universe and we’re all just living in it.” The tweet included a photo of the Universal Studios Florida arch with Lil’ Boo’s head in place of the Halloween Horror Nights medallion.

More recently, the official Universal Orlando account tweeted an image of Earl the Squirrel, a character created for promoting the holidays at the resort, but Earl was holding a string of lights made up of Lil’ Boo faces rather than the usual Christmas lights. 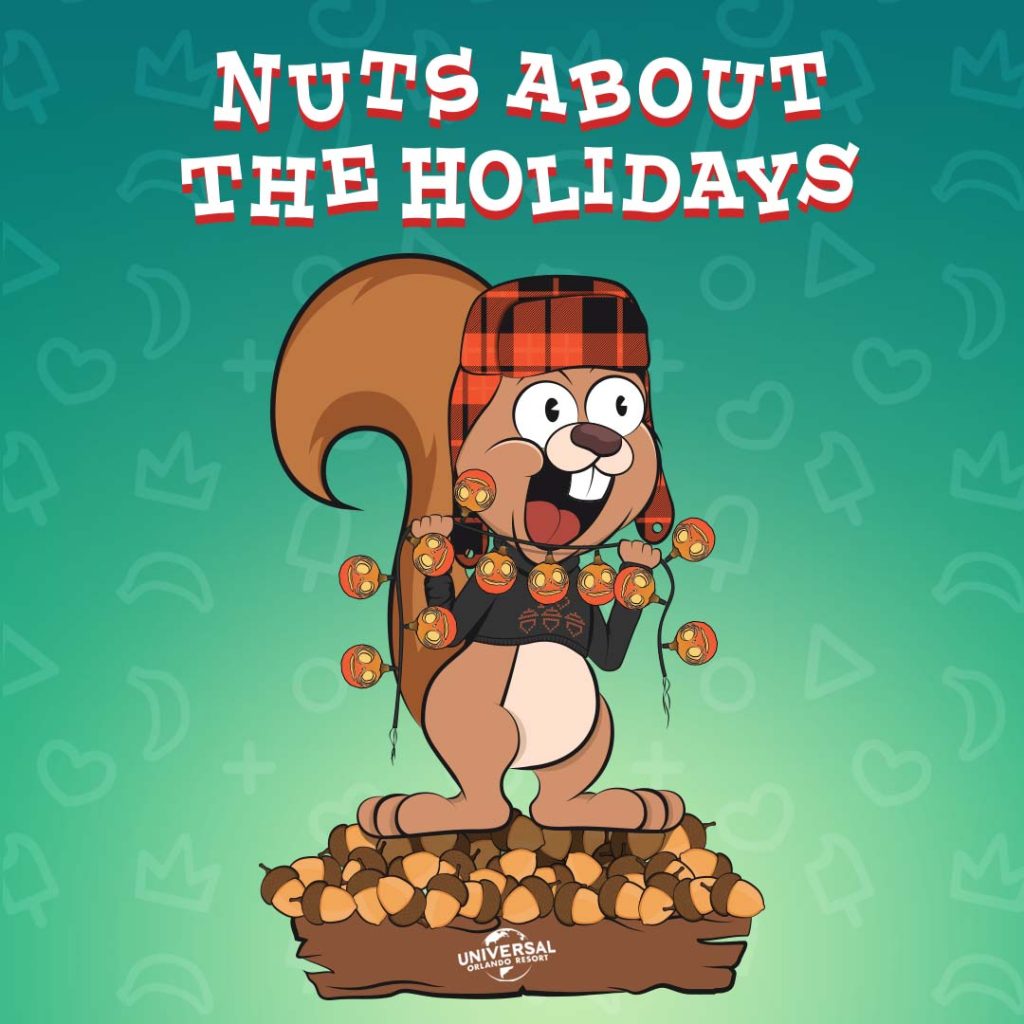 Of course, the official account has helped to spread awareness of Lil’ Boo, but the explosion of popularity and outpouring of support for this little guy has mostly come from within the online HHN fan community itself.

Fan-created artworks, countless button designs, t-shirts, and even a song have been inspired by the Lil’ Boo character. Some social media users have even mentioned possibly getting a tattoo! 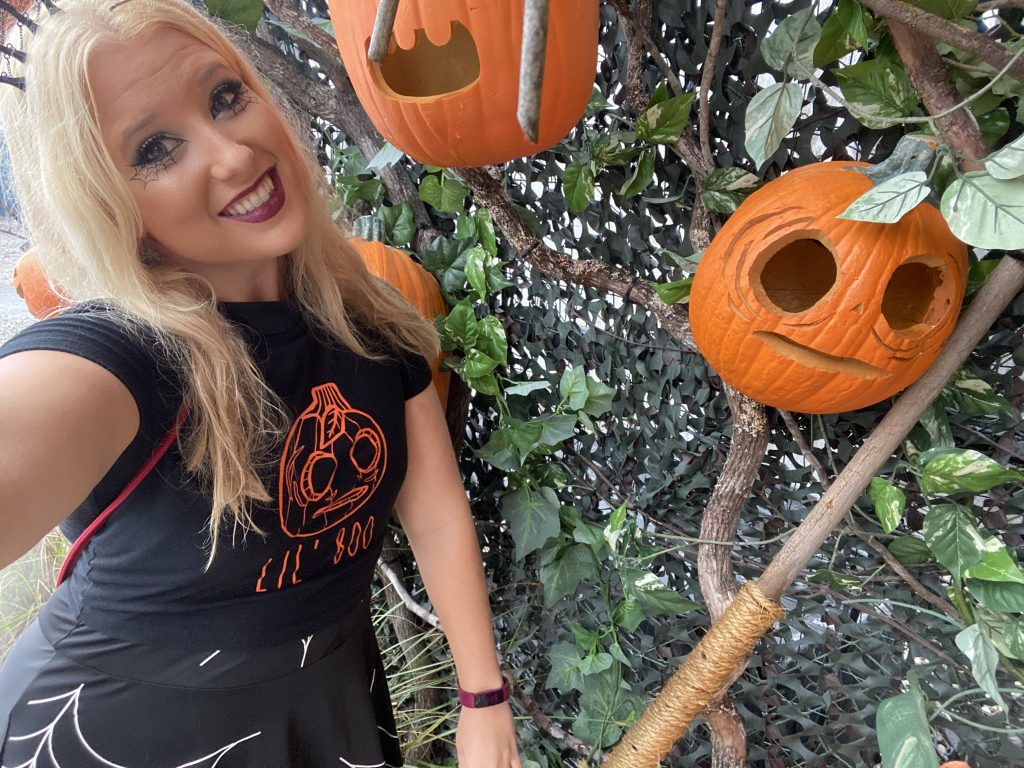 There were times during the event this year where it seemed like you could go to Halloween Horror Nights on the weekend, and return home with several fan-made buttons featuring the little fella. Artists were not only handing out buttons, stickers, and even small plush, but they were trading them with other artists!

And what’s great about there being so much out there, is that everyone brings their own personal flare and style to their version of the Lil’ Boo face. 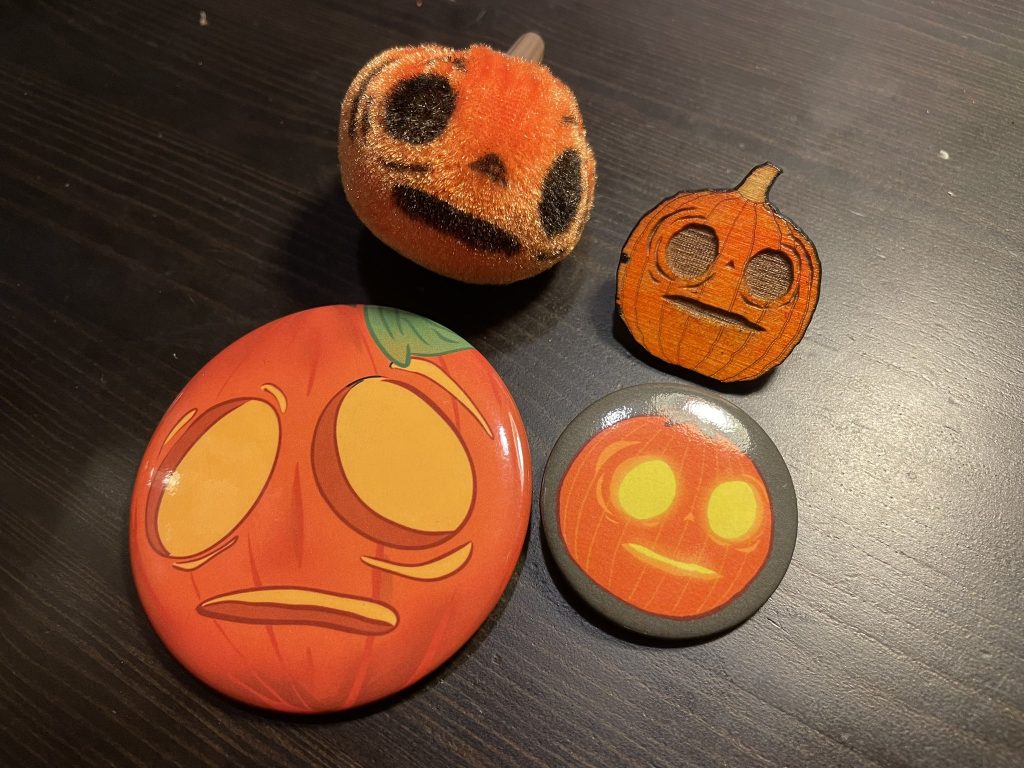 And how does Lil’ Boo’s mom feel about all this fame for the little guy? Emory had this to say:

“It gave me chills, it is awesome, but it gave me a moment of pause. Oh my God, I touched that with my hands and I made that what it is… The semiotics of what this little face represents has kind of taken over with people so quickly that now the Twitter account for universal is responding to this phenomenon and it’s like, I still can’t fathom—I can’t wrap my head around it.” 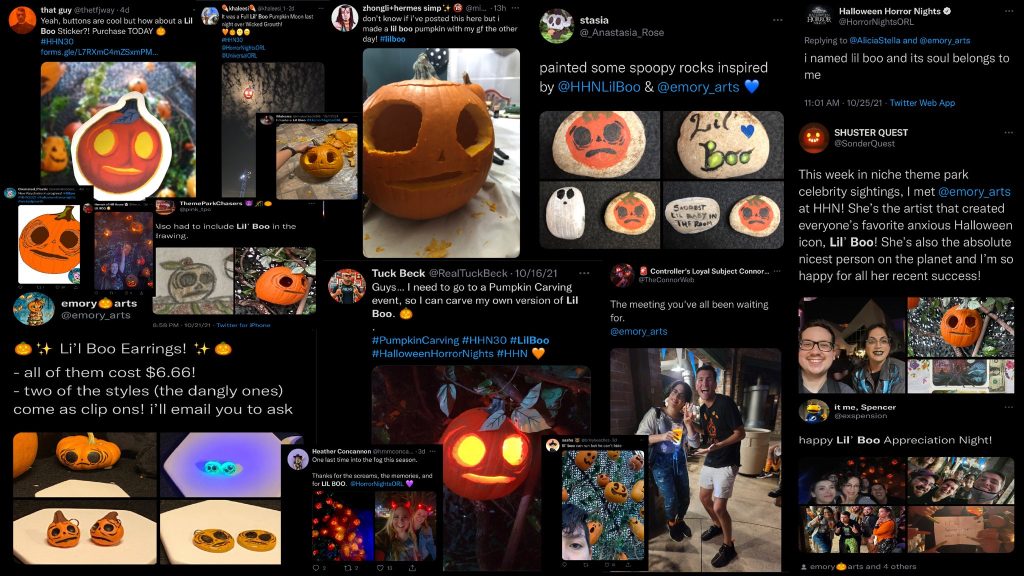 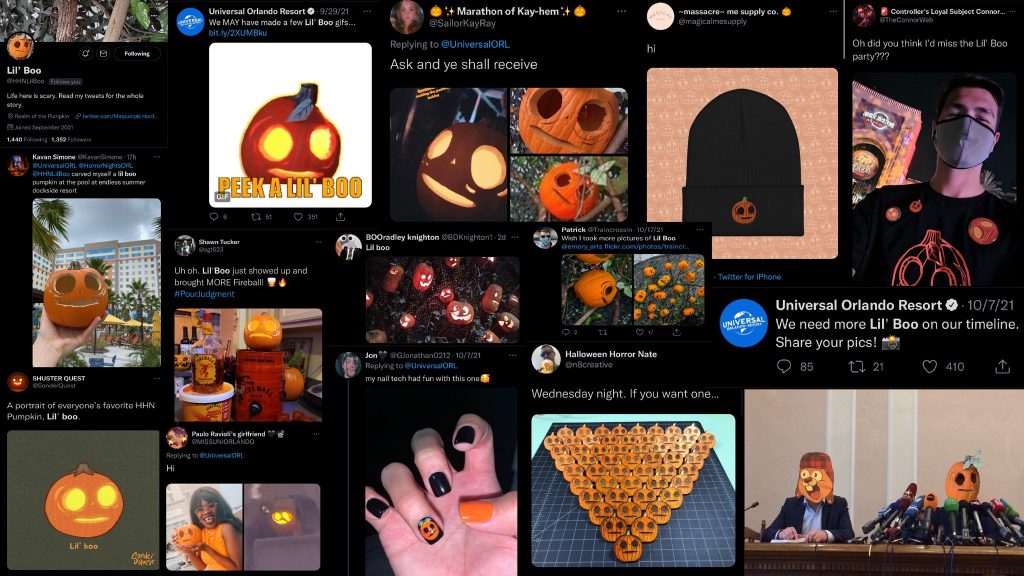 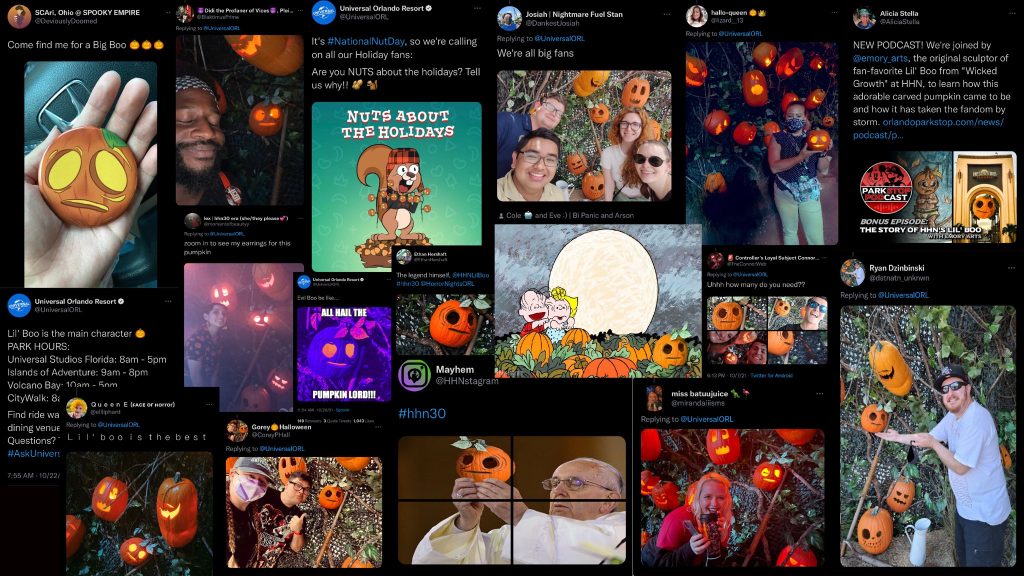 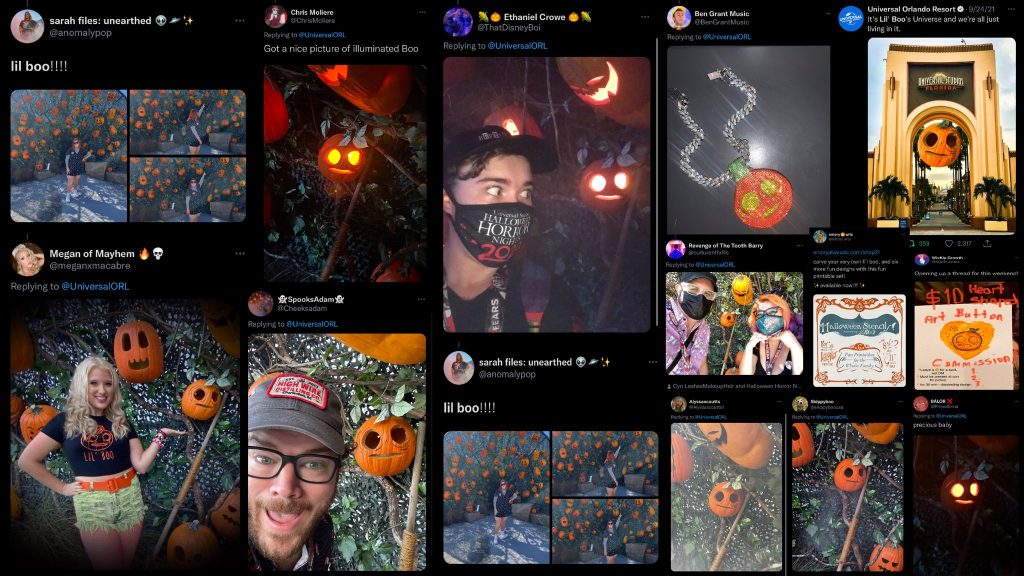 Lil’ Boo may have gotten too famous for his own good in fact. With just a few weeks left in the event, Universal Orlando moved the adorable little pumpkin higher up, and just out of arms’ reach. Perhaps it was for his own safety, but this move did make it more difficult to get a selfie with the celebrity pumpkin.

Maybe it speaks to the future of this beloved gourd, where even Universal themselves are worried and feel the need to protect him from his own fans. Perhaps they were concerned someone would attempt to steal him or vandalize him in the last days of Halloween Horror Nights. Pehaps maybe, just maybe, they have bigger plans for him in the future.

For now, Emory is continuing her own interpretation of the story of Li‘l Boo. You can find postcard prints for purchase featuring Li’l Boo created specifically for this Halloween Season. She is also selling digital stencils you can download and print at home to carve your own Li’l Boo, among other original designs, just in time for Halloween. 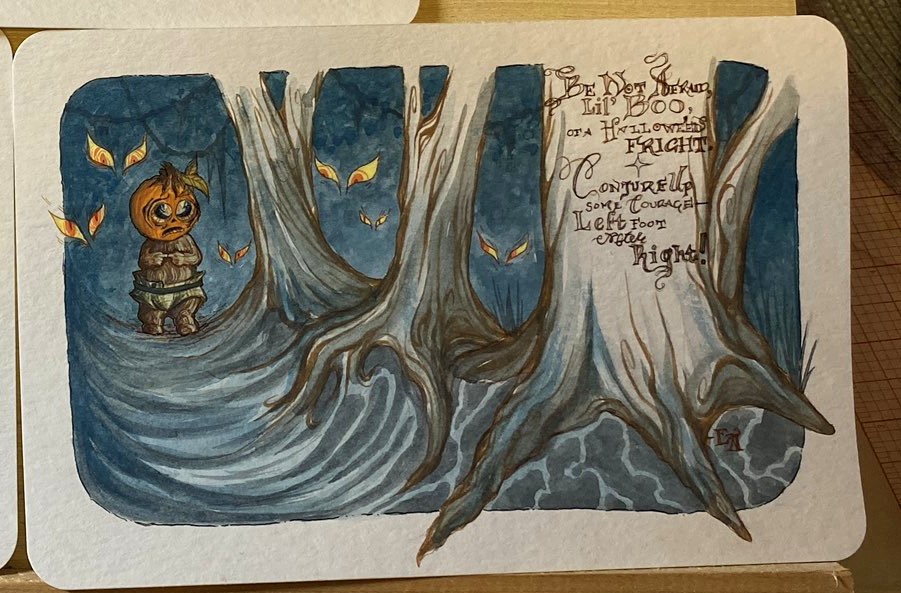 From what she told us on the podcast though, it sounds like Li’l Boo’s story is just beginning. Emory hopes to share more of her own backstory for the character in an original storybook someday, featuring all new artwork.

Until then, whether or not Universal Orlando decides to utilize the concept of Lil’ Boo next year or not, I know in my heart that Lil’ Boo was most certainly the true icon of Halloween Horror Nights 30 this year. And it was definitely a year I will never forget. 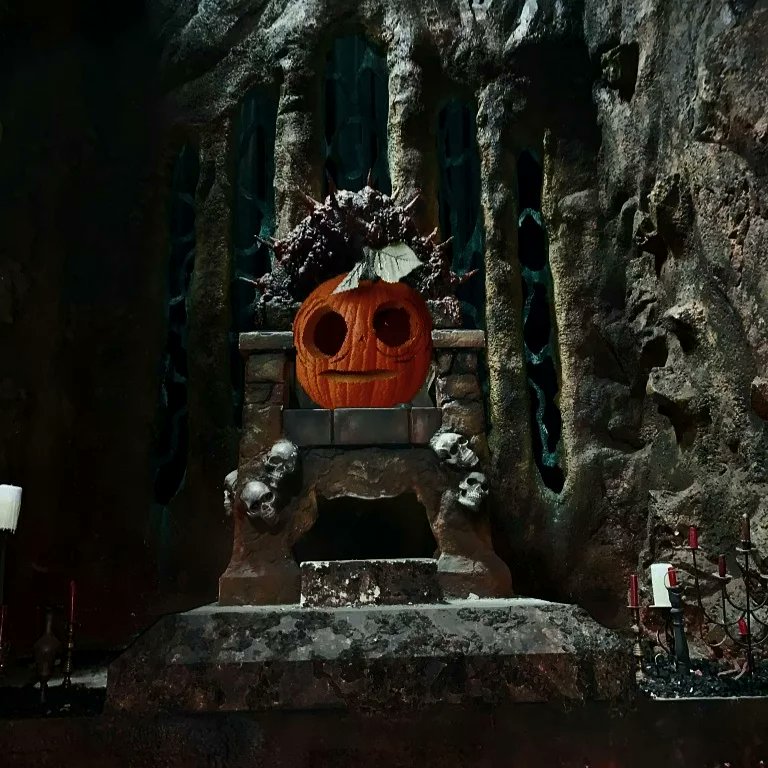 Lil’ Boo pictured sitting atop the throne at the end of the Icons haunted house, Photo: @HaydenGPalmer

That’s all for now, but be sure to check out the many links to various creators throughout this story, including Emory Arts for more information on her latest creations. If you have your own art inspired by Lil’ Boo, be sure to share it in the comments below, or share this story on social media to help spread the word that Lil’ Boo is this year’s true icon.

Subscribe to the news feed or enter your email address below to never miss an update. Main Image: Source | Original Photos: Alicia Stella | Other Images as Captioned