We’re entering a new era in our world’s history. Even when things do eventually “return to normal,” theme park guests will likely be a little more conscious of germs, and how they spread.

In a new, (and likely not the last of its kind,) patent from Universal for sanitizing amusement park articles, we can see that they’ve already been thinking up new solutions for this issue. Learn more about this particular patent below, and how it could possibly be used on new attractions coming to Super Nintendo World, Universal Studios Beijing, and even Universal’s Epic Universe in the coming years. 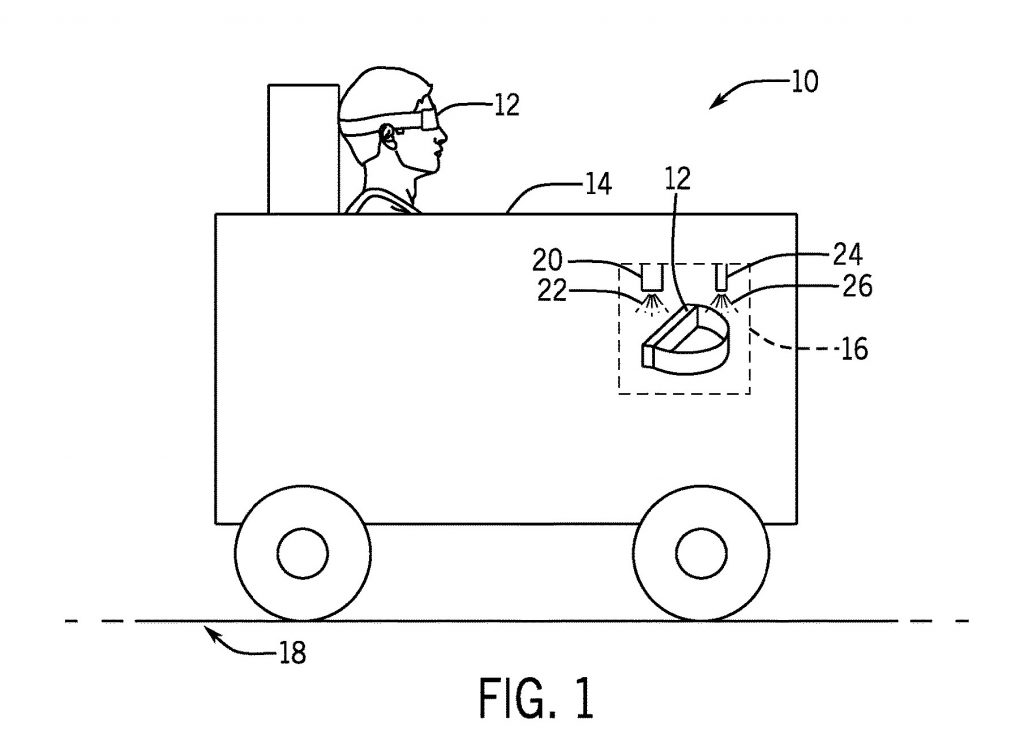 Currently, most major theme parks collect articles like 3D glasses from the guest after they ride. Then, hundreds are carted off at once to a nearby location to be cleaned. These cleaning stations could be part of the ride building itself, or the articles could be taken to a shared cleaning location elsewhere in the park. This patent calls this process “inefficient,” and offers an alternative.

The patent, which is called “Systems and methods for sanitizing amusement park articles,” aims to introduce a new method for cleaning things like 3D glasses right onboard the ride vehicle itself, and it suggests a few different ways to do it. 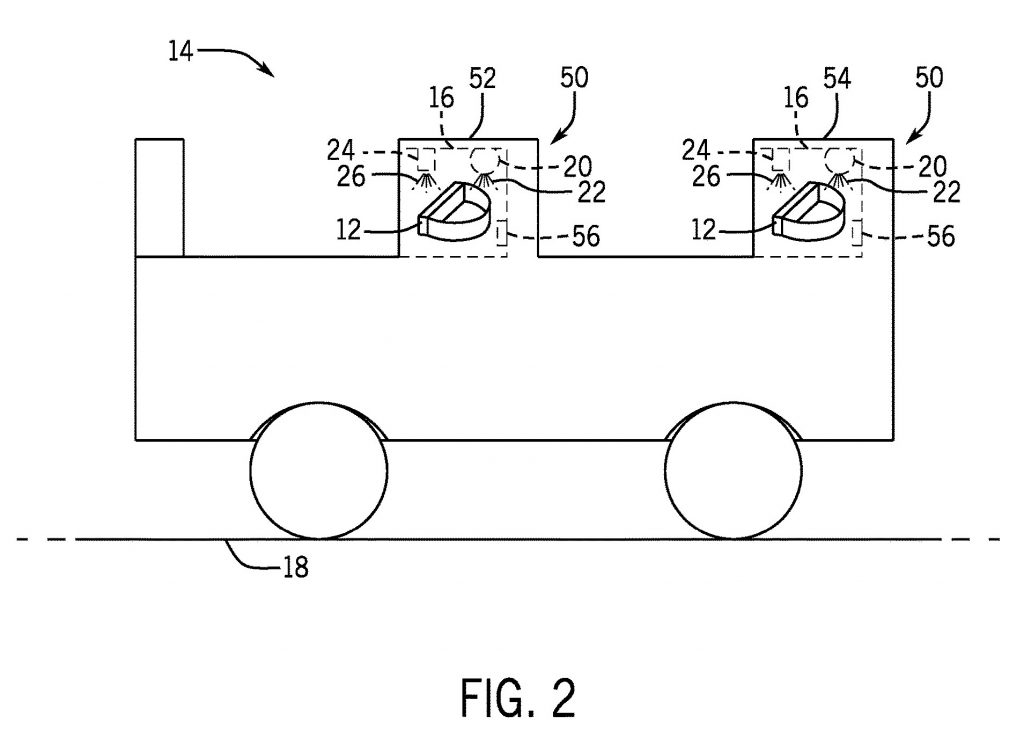 The patent describes a possible drawer or compartment built into a ride vehicle, perhaps located in the seat back in front of you. Riders could be instructed to place their 3D Glasses, or other theme park article, into the drawer as they approach the unload area. Then, while the ride vehicles makes its way from unload to the load area, it could automatically clean and disinfect the item, before new riders board and retrieve the cleaned item from the compartment.

The system could utilize some type of sanitation spray, ultraviolet light, or a combination of both to “remove bacteria and other undesirable substances from the articles of the ride vehicle that are frequently contacted by guests.” If an item requires a longer amount of time to be cleaned, multiple compartments could be housed, rotating a clean item for the guest to use, while cleaning another throughout the duration of the ride. That way there’s always one ready, and always one being cleaned through each trip around the ride course. 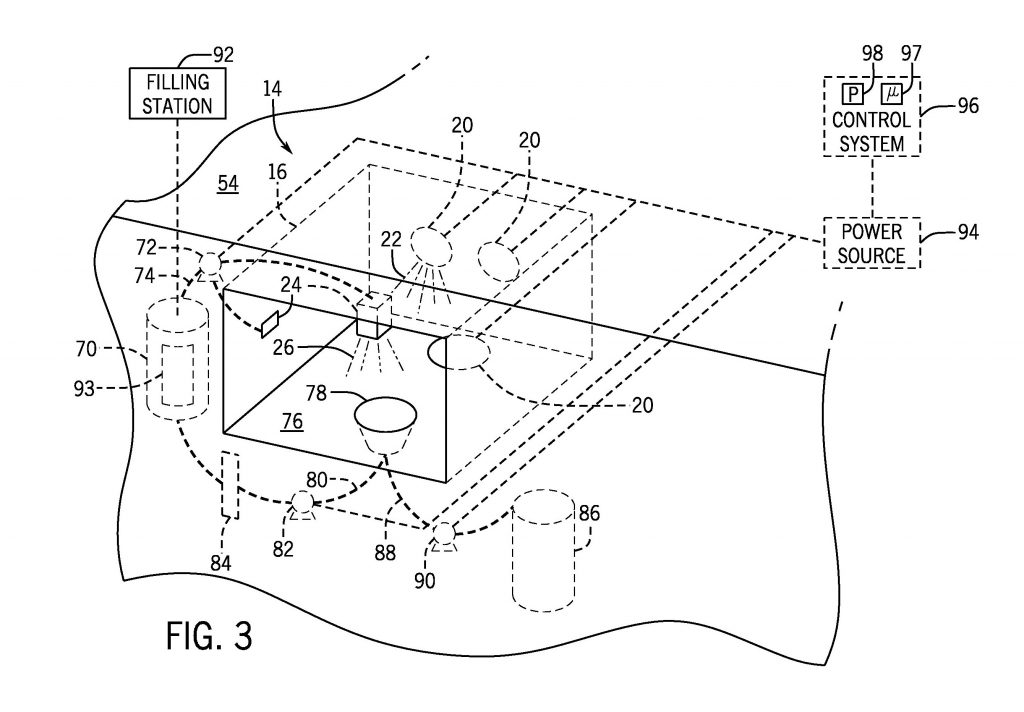 Cleaning compartment with UV light and sanitation mist or liquid

The patent also describes how other frequently touched items could be cleaned automatically between uses, including lap bars, handles, knobs, handheld or wearable articles, as well as goggles or glasses. According to the patent: “Such surfaces may accumulate bacteria and/or other undesirable substances as guests contact the surfaces…” A possible concept is explained where a guest-facing panel is rotated away so it can be cleaned during the ride, while providing a freshly sanitized version on the other side for the arriving guest.

The patent was published in November of last year, but the timing seems almost prescient. Now, more than ever, a technology like this could be incredibly useful to help speed up load times for ride vehicles while disinfecting surfaces guests touch regularly. The patent explains how “traditional sanitization methods [are] time consuming, thereby reducing an amount of guests that may experience the amusement park ride, game, interactive feature, and/or entertainment show throughout a given day.” 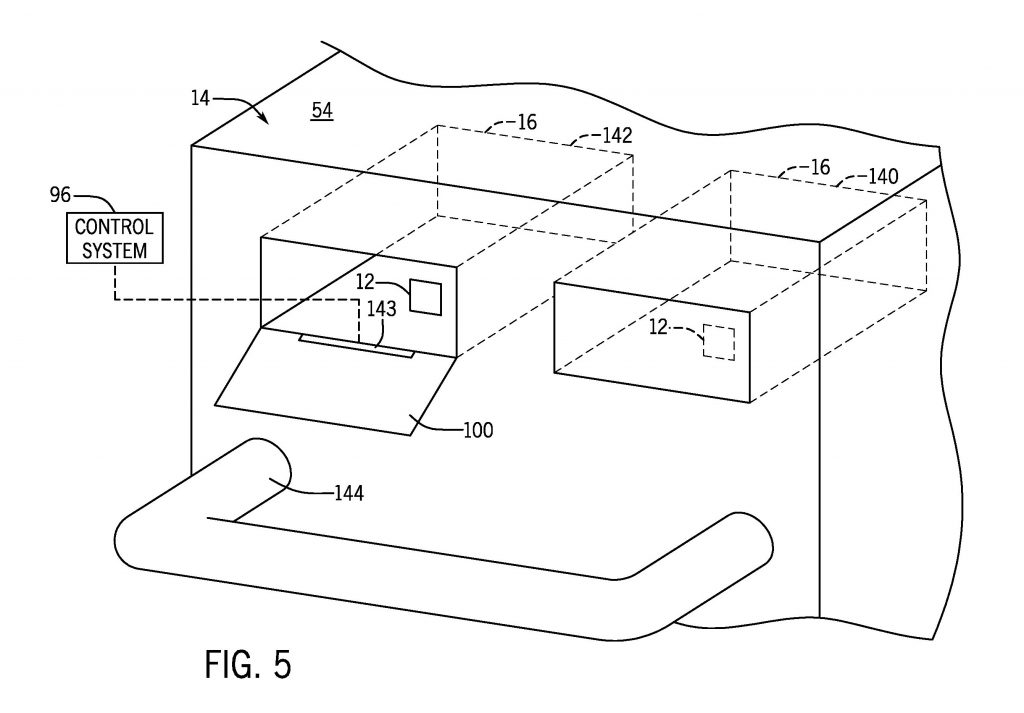 Given the images used, and some of the descriptions included with the patent, it seems to me that this particular concept was developed for the possible AR goggles rumored for the Mario Kart ride. The Mario Kart ride will be the main attraction at the Super Nintendo World lands that are being built at Universal Parks and Resorts around the world. The patent describes how this sanitizing technology could be used with AR goggles, and more importantly, why.

Right off the bat, in figure one (shown above) the image is described as showing a guest on a theme park ride wearing what could be “augmented reality goggles.” Later, the patent explains how some items that require routine cleaning may be “relatively expensive, such that the amusement park purchases a finite amount of the articles to make available for guests…” If there are only so many (expensive) augmented reality goggles available for use, there just won’t be enough to cart off to a nearby location to be cleaned throughout the day. Once more, requiring that riders replace the goggles into a compartment before disembarking may cut down on theft as well. 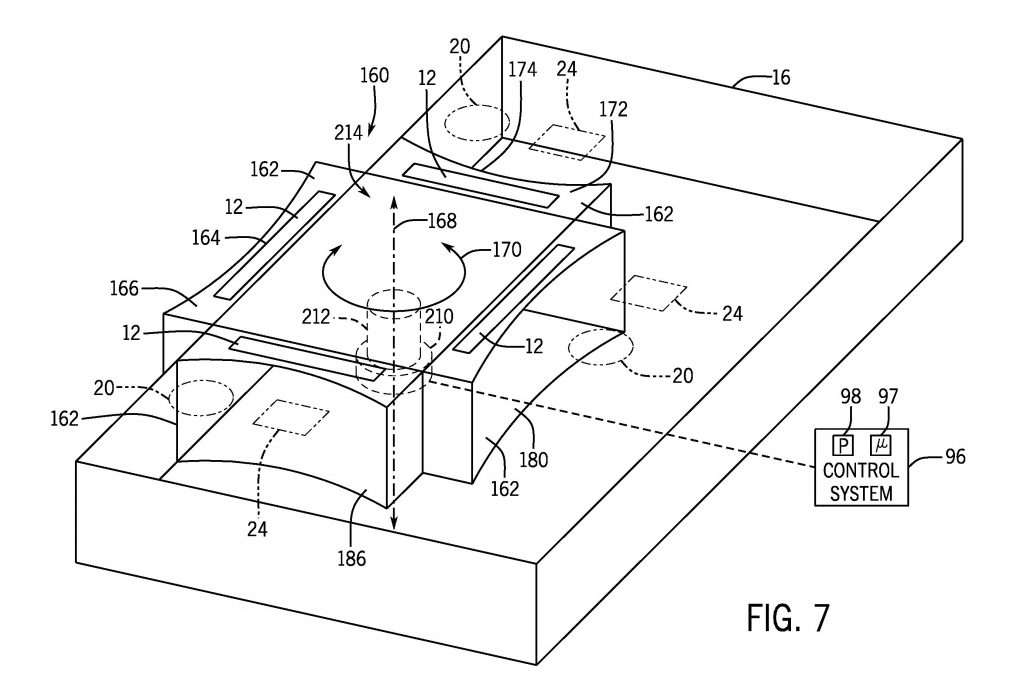 Entire control panels, handlebars or other interactive elements could rotate a quarter-turn to reveal a clean version for the next rider, while the other 3 are cleaned during the ride

And the applications for this technology don’t end with glasses, goggles, and frequently touched handles. Other items that are handled by riders could be automatically cleaned after each use as well, including “interactive equipment.” The blasters on Men in Black: Alien Attack come to mind. This interactive gun is used by nearly every guest that rides, but was previously only cleaned once per day. By adding this technology to the ride vehicles, holstering the gun after each use could offer an opportunity to disinfect it, hopefully ridding it of germs that may have been left by the prior user.

While it may not be incorporated into existing rides any time soon, it’s possible that Universal has filed this patent as they’re installing similar features into new attractions that have yet to open. In addition to the interactive components on the Mario Kart ride, perhaps we could see this technology used on attractions coming to Universal Studios Beijing or Universal’s Epic Universe. With a big push to add interactive elements and video game like features to new theme park attractions, building in a way to also keep these elements clean makes sense—especially in the new world we are only now beginning to enter.

If you’d like to learn more about this particular patent, you can read the full text here. It goes on to explain how sanitzing fluids can be kept and refilled on the ride vehicle, what wavelengths of UV light might be suitable, and more. If you’re interested in learning more about rumors for the upcoming Mario Kart ride, be sure to check out our previous story here. And stay tuned for continuing coverage for Super Nintendo World, Epic Universe, and more. Subscribe to news feed or enter your email address below to never miss an update. Stay safe!