With the global pandemic putting a wrench into so many of our plans, including vacations, some out there are wondering when announced attractions will be opening. Theme parks are struggling right now, not only to survive, but they’re also trying to complete in-progress construction projects. Even after they’re complete, they have to decide on when might the best time to actually open them.

From Super Nintendo World at Universal Studios Japan to the Ratatouille ride at EPCOT—and everything in between—let’s go over upcoming rides around the world, and when we think they’ll be ready to open. In some cases we have official dates, (which are still subject to change,) but in many cases, we’ll be going by rumored target dates based on the best current information available. UPDATE: A video version of this story has been added below, featuring additional visuals. 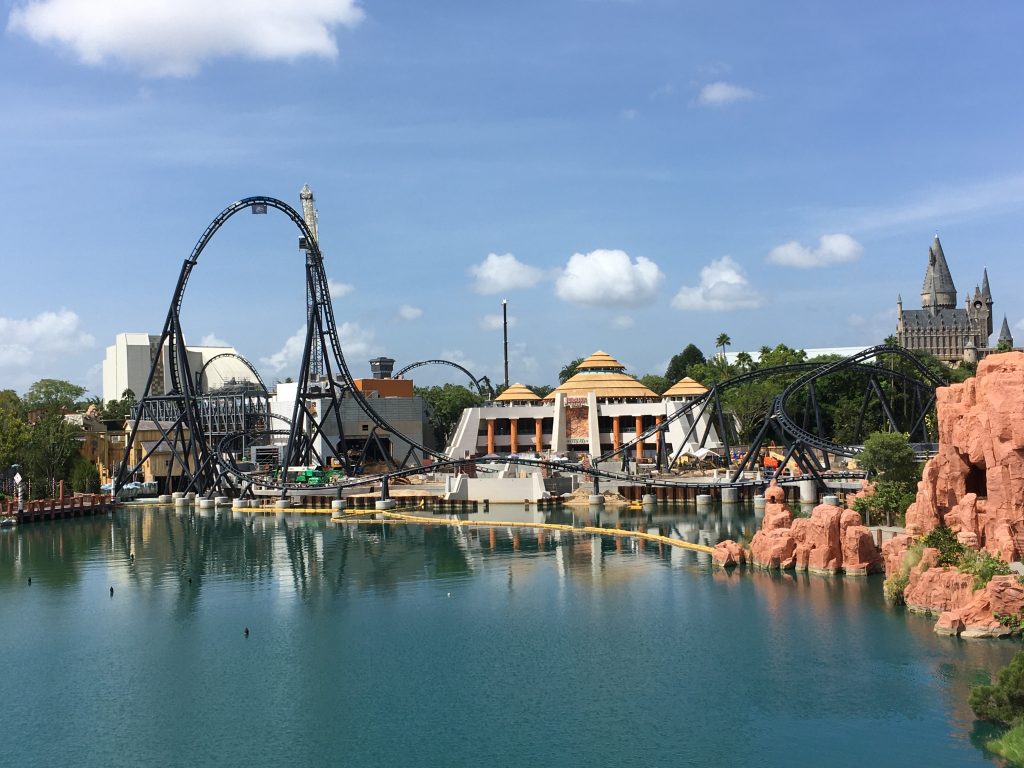 Shockingly, Universal Orlando still hasn’t announced this behemoth of a roller coaster, even though it has been under construction for over a year and a half! Permits for construction work have the project completed by Spring of 2021. Since the track has been completely installed some believe it could open sooner, but I doubt it. With the queue left to construct, as well as effects and additional theming, I could easily see it taking until early next year.

Plus, in an attempt to avoid another Hagrid coaster situation, they may want to spend a considerable amount of time testing this new ride. So, even though work may be complete by the spring of next year, it’s possible that testing may take several weeks, which could put the opening around early Summer 2021. But hey, that may be just in time for the release of Jurassic World: Dominion in theaters, making for some good synergy, (if the film’s release isn’t pushed back itself that is). 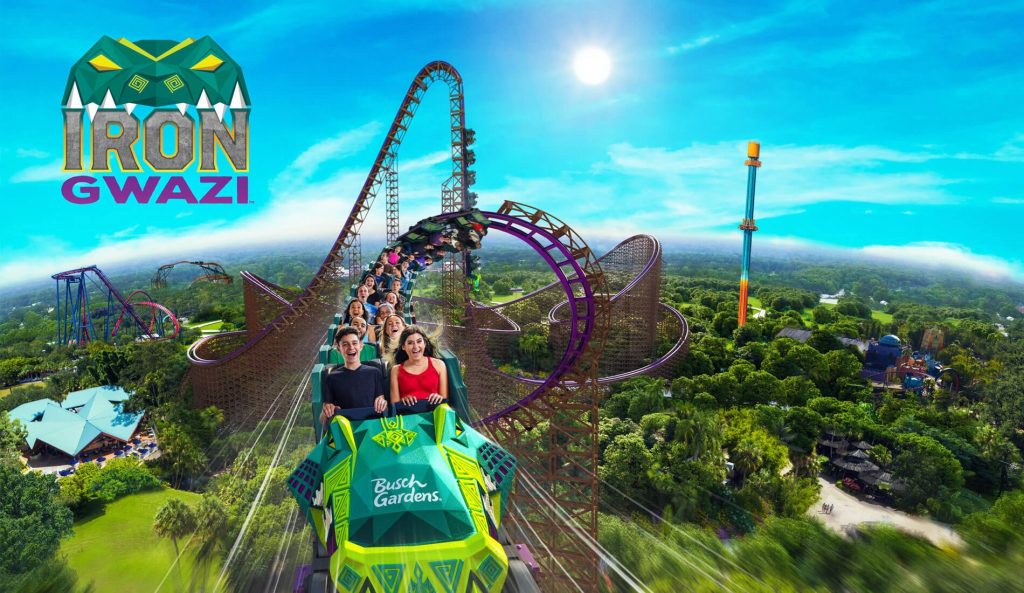 While originally set to open this year, both of these brand new roller coasters in Central Florida have been officially rescheduled for Spring 2021. Some rumors have (at least one of them) opening by Valentine’s Day specifically. Iron Gwazi is a wood-steel hybrid coaster in Busch Gardens Tampa Bay that reaches speeds over 76 mph and is over 206 feet tall. And Ice Breaker will be SeaWorld Orlando’s first launch coaster.

Pantheon at Busch Gardens Williamsburg and Emperor at SeaWorld San Diego are now also expected to open in 2021, but an official announcement for these coasters has not yet been made. 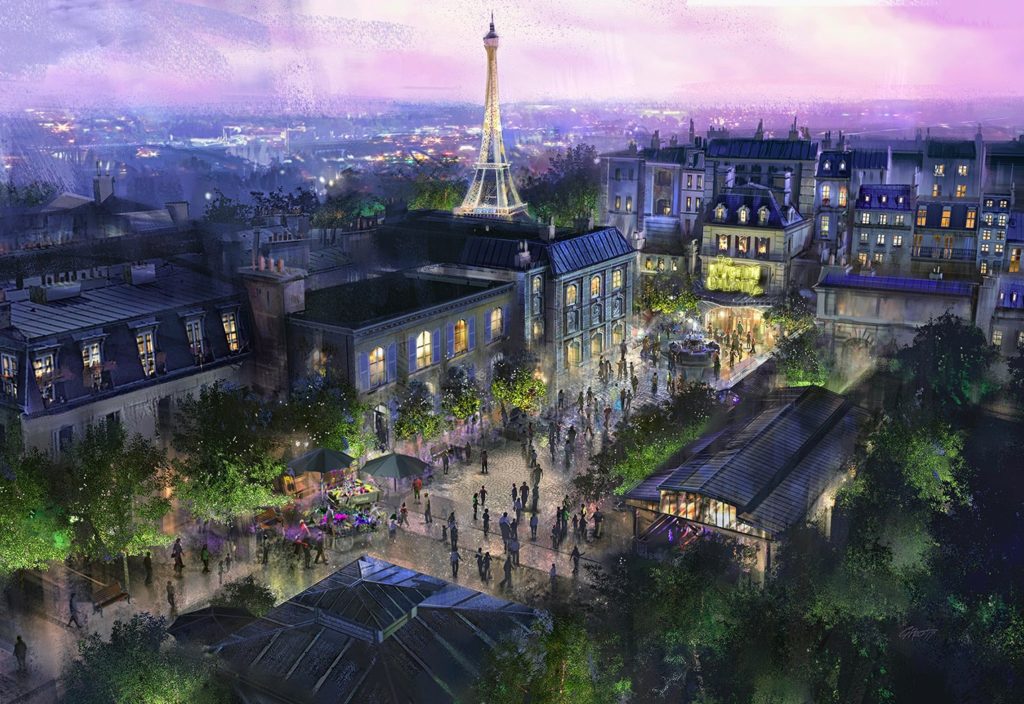 First, Remy’s Ratatouille Adventure was originally set to open at EPCOT this summer, however, due to the parks being closed and construction halting, the opening of this cloned Paris attraction has been postponed. Rumors (and guesses) have the ride ready to open by early next year. However, some are hoping that it could possibly open as soon as this winter, at the very end of 2020. Disney may be waiting until they are able to increase park capacity before opening another major attraction though, so 2021 is a good assumption.

And speaking of 2021, that will be the resort’s 50th anniversary. Many new attractions were originally slated to open by 2021 at the latest. One of those is the TRON Lightcycle / Run roller coaster being built in Magic Kingdom’s Tomorrowland. Construction for this new ride resumed when the theme parks reopened over the summer, and they appear to be hoping to open it by Fall 2021. As with all of the Walt Disney World projects, nothing has been confirmed at this time.

The final major attraction being built is the Guardians of the Galaxy: Cosmic Rewind roller coaster in EPCOT. This massive project is taking over the old Universe of Energy Pavilion. While originally announced to open by 2021, rumors have it now opening in 2022, which is the park’s 40th anniversary. This will allow Disney to focus on opening the other projects first, and help them space out grand openings in the coming years.

Other projects for EPCOT, like the Mary Poppins addition to the UK pavilion, the Moana Journey of Water interactive trail, and an update to Spaceship Earth have officially been postponed indefinitely. Many believe the Poppins ride may have been cancelled altogether. Only time will tell.

Originally set to open this summer, the world’s first Super Nintendo World’s grand opening has been postponed. Yes, Universal Studios Japan has reopened to guests, but it is running at a lower capacity. Plus, travel restriction won’t allow for outside visitors to come and enjoy the new land if it were to open.

Universal has said that they plan to announce further details this Fall on when the Super Nintendo World may open. Many are guessing that it will end up officially opening sometime in 2021, probably in the Spring. That way it can be open and ready for international visitors in time for the rescheduled Summer Olympics. 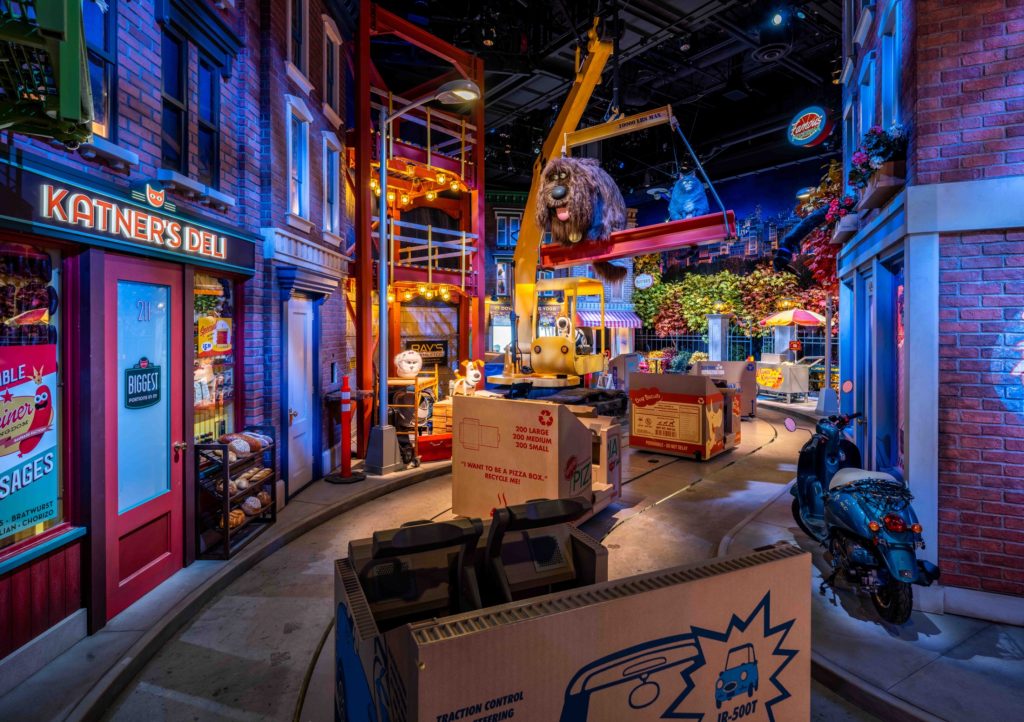 The Secret Life of Pets at Universal Studios Hollywood – Soon(?)

According to rumors, both The Secret Life of Pets: Off the Leash and the updated Jurassic World: The Ride attractions are completed and ready for guests. The only problem is that Universal Studios Hollywood itself isn’t yet cleared by the state to reopen. Of course, Universal might wait a bit to open the Pets family dark ride, but Team Members were able to ride it before the park closed, so at least we know it’s ready. The updated Jurassic World ride has been reportedly testing its new finale, so it should be set to open as soon as the park does.

While not officially announced, Hollywood’s edition of Super Nintendo World is currently being built on the lower lot. While they have made incredible progress in recent months, rumors say this land will not be opening until 2022. Things could always change, but with the California parks not even open yet, a lot is still up in the air. 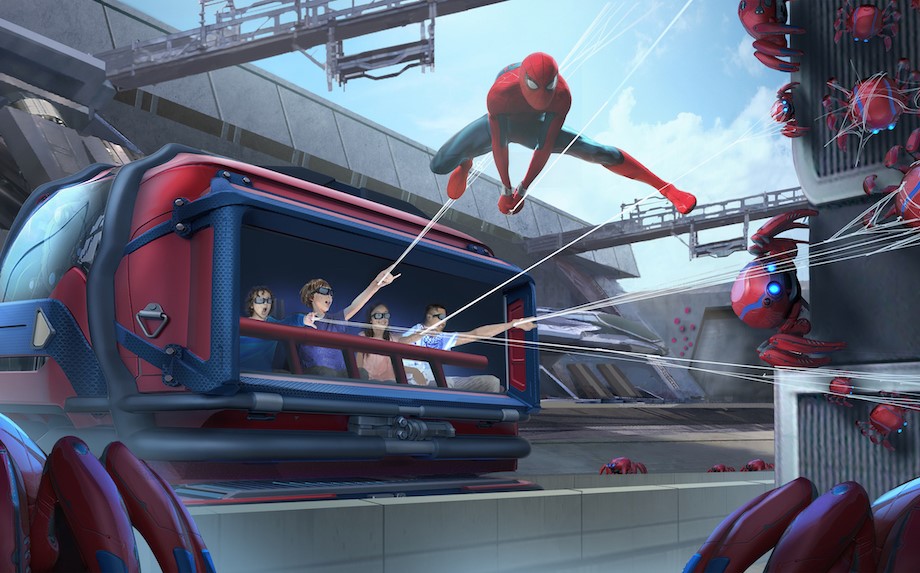 Another attraction that was set to open this summer before the parks had to close, Avengers Campus’ Web Slingers: A Spider-Man Adventure at Disney California Adventure is presumably ready to accept guests. However, just like EPCOT’s Ratatouille ride, even if the parks in Anaheim were to open this year, Disney may hold off on opening this new ride—along with the rest of the area—until 2021.

Sadly, the phase 2 Avengers E-ticket ride seems to have been postponed indefinitely. Even though they recently installed the iconic quinjet atop its show building, there has been zero word from Disney on a timetable for this attraction. The ride, which was set to take riders on jetpacks over Wakanda, has not been mentioned by the company since the park closures.

One ride that Disney has confirmed is still in development is the west coast’s version of Mickey and Minnie’s Runaway Railway. Located in the Toontown area at Disneyland Park, vertical construction for this ride just started. However, the official opening date was changed from 2022 to 2023. 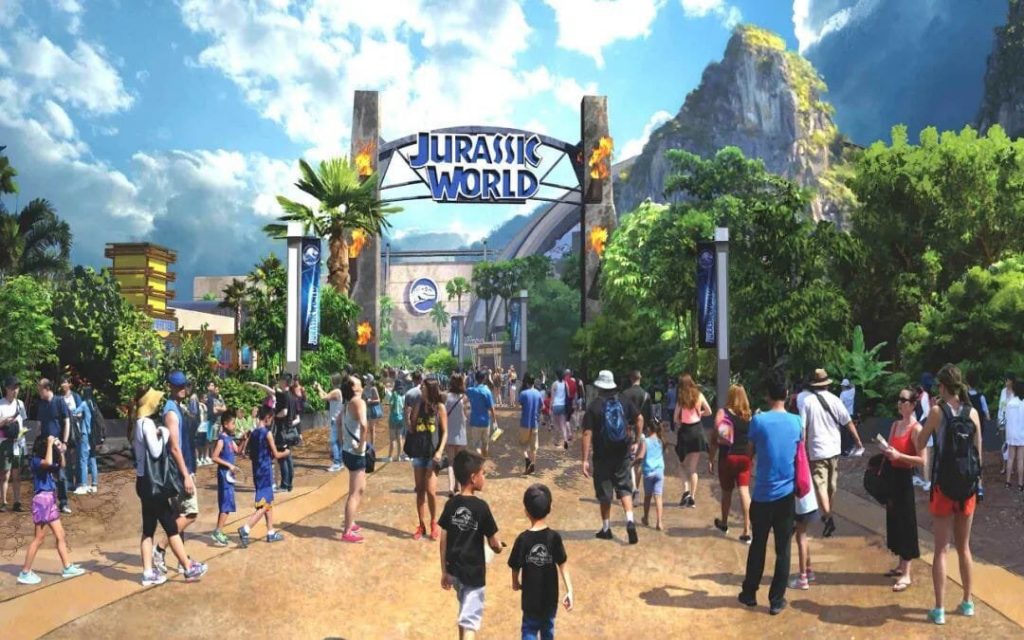 One project that still seems to be on track to open as originally intended is Universal Studios Beijing and the surrounding resort. This park will open with new lands based on Jurassic World, Kung Fu Panda, and more. Internal targets have this all-new theme park opening around May 2021, and going by construction progress, it appears as though they may make their deadline. Whether or not the world itself will be ready to visit a brand new theme park by that time, remains to be seen. 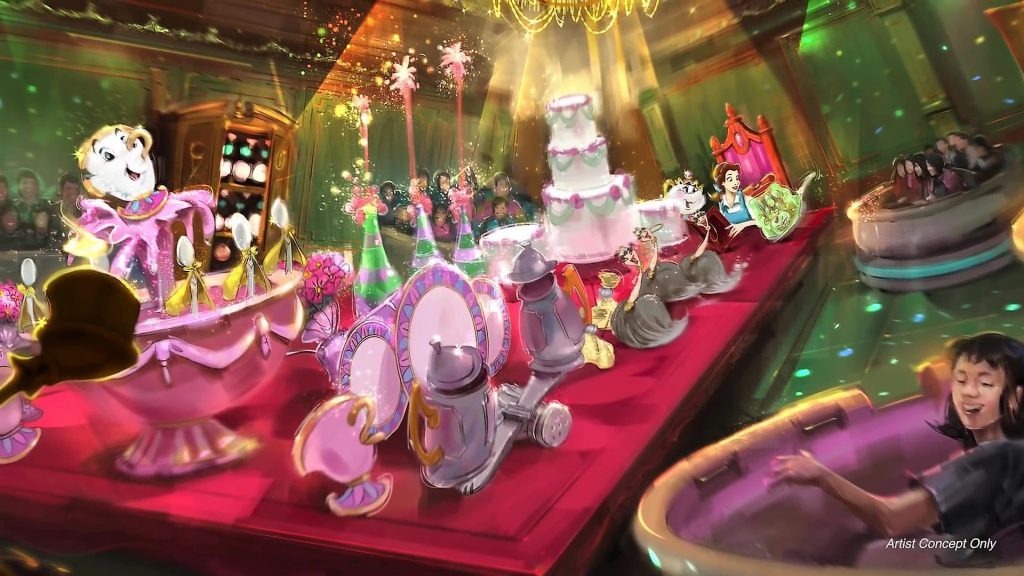 Other International Disney Parks Projects — 2021 and Beyond

Avengers Campus at Disneyland Paris’s Studio park recently resumed construction, and is still set to open in phases, likely beginning in 2021. The Iron Man roller coaster replacing Rock ‘N Rollercoaster is expected to open first, followed by the Spider-Man web slinger ride, likely a year later. Star Wars and Frozen attraction construction appears to be delayed, making it hard to gauge when they’ll be ready. The transformation of the Production Tram Tour’s Catastrophe Canyon into Cars’ Route 66 Road Trip has continued, but the opening has been delayed from 2020 to probably 2021.

The Enchanted Tale of Beauty and the Beast and The Happy Ride with Baymax attractions at Tokyo Disneyland appear to be set to open this Fall, as early as October 2020. The continued Tokyo DisneySea’s Fantasy Springs expansion featuring Peter Pan, Tangled, and Frozen attractions is now expected to be complete by 2023.

Work has continued at the Frozen expansion for Hong Kong Disneyland, and its Frozen Ever After and Wandering Oaken’s Sliding Sleigh coaster are still scheduled to open late 2021, for now.

Construction only recently started on the Zootopia land in Shanghai Disneyland, so it’s too soon to know for sure when that will be opening. Guesses put the opening by 2023. 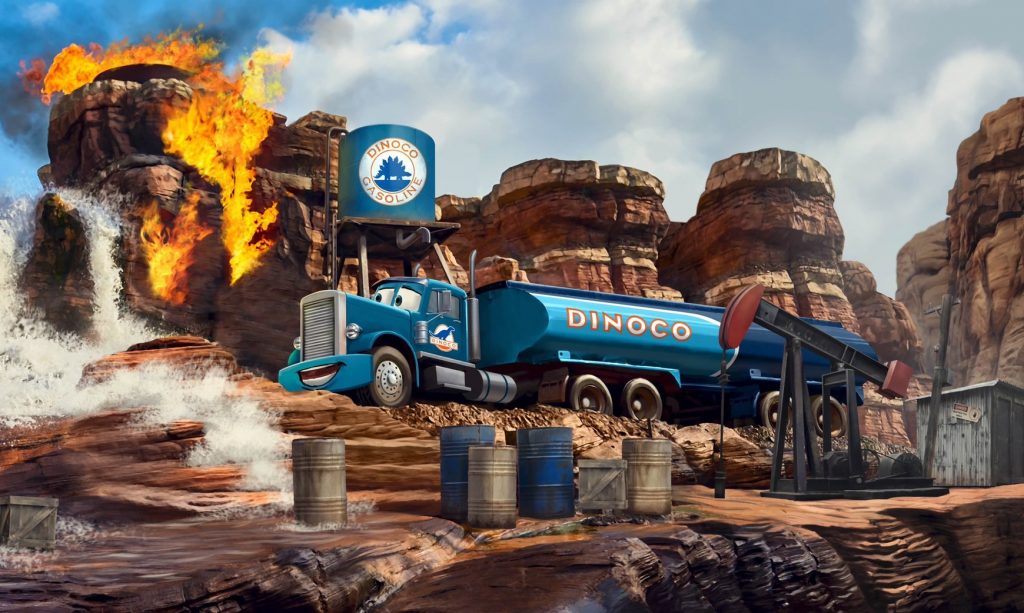 Now, most of the dates listed above are based on rumors or the best information available at the time of writing. Even the officially released opening dates could change, especially given the current global situation. You should keep this in mind before planning your next vacation, and always check with the official theme park’s website for details ahead of your next visit.

Stay tuned for continuing coverage of many of these upcoming attractions and more! Subscribe to the news feed to never miss an update, or enter your email address below.