It’s just about time to get your Universal Orlando tickets, because Hagrid’s Magical Creatures Motorbike Adventure is scheduled to officially grand open June 13th at Universal’s Islands of Adventure.

With the chance of the walls coming down and soft openings beginning any day now, let’s go through everything we know, (and think we know,) about this new roller coaster attraction. We’ll discuss rumors for the queue, the ride’s show scenes and coaster features, and even talk about how soon we could see soft openings start, when we’ll get our first chance to ride! 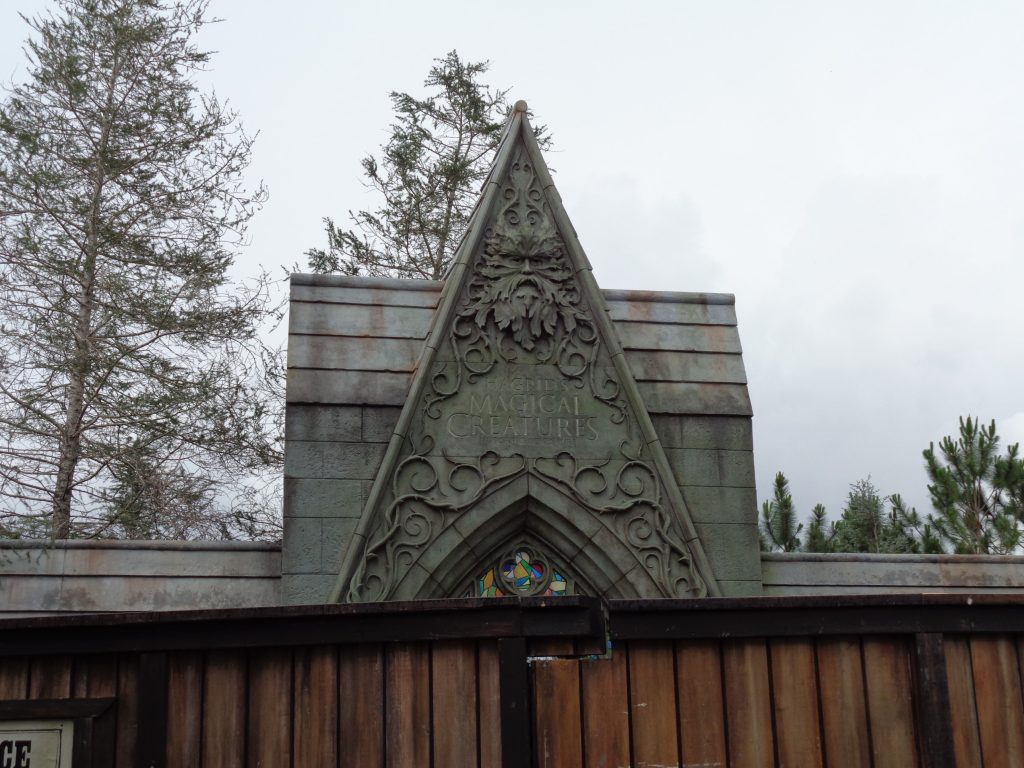 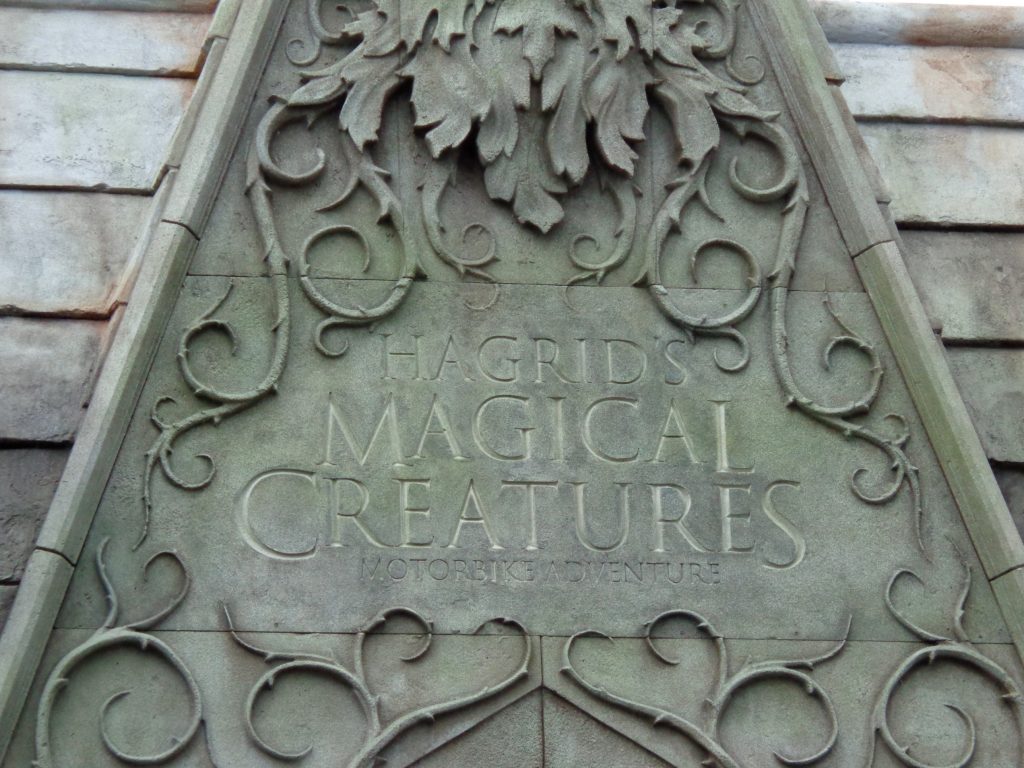 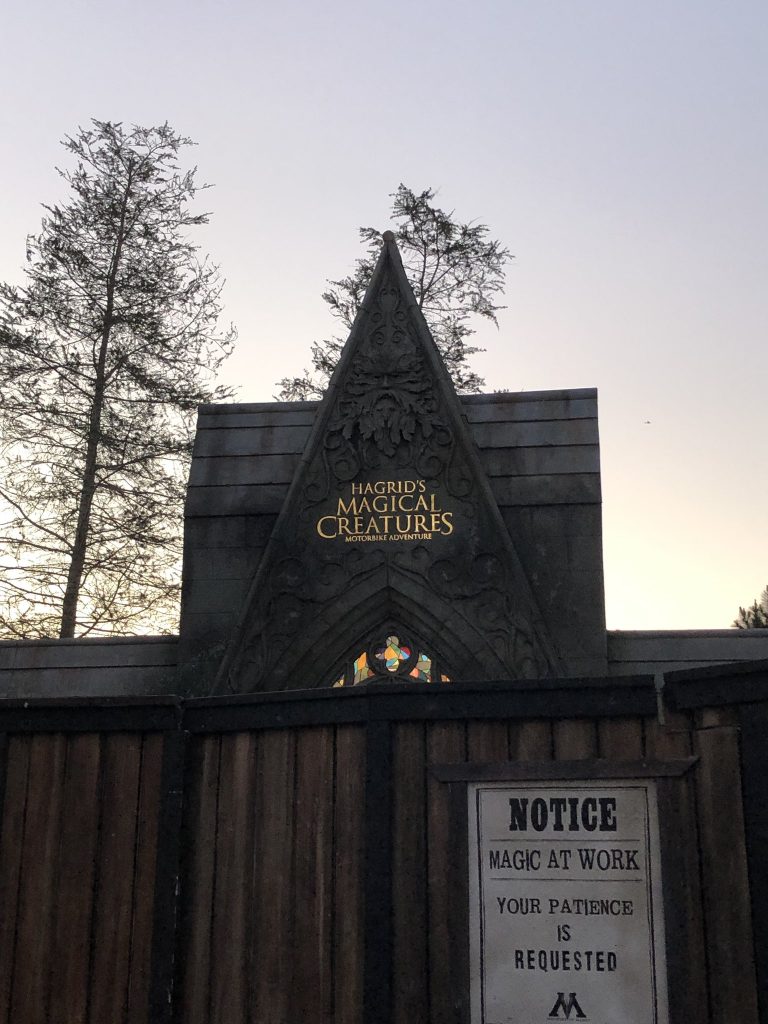 Entry sign lit up at night (Image by @CarpetUmbrella)

One of the things we know the least about is what we will encounter in the queue. Universal Orlando let us know that we should keep our ears tuned for the voices of gnomes, as they’re known to scurry around the grounds. And they said there will be sculptures of various magical water-dwelling creatures like Merpeople and Grindylows. Other than those couple bits of info, the rest is still a mystery.

The location for the queue appears to be a section of Hogwarts where nature has began to reclaim the castle. Moss and vegetation grow wildly around the structures. Rumors have us wandering through old classrooms covered in vines, as well as tunnels and catacombs. It can be assumed that this is where Hagrid’s Care of Magical Creatures Class will be going on today. 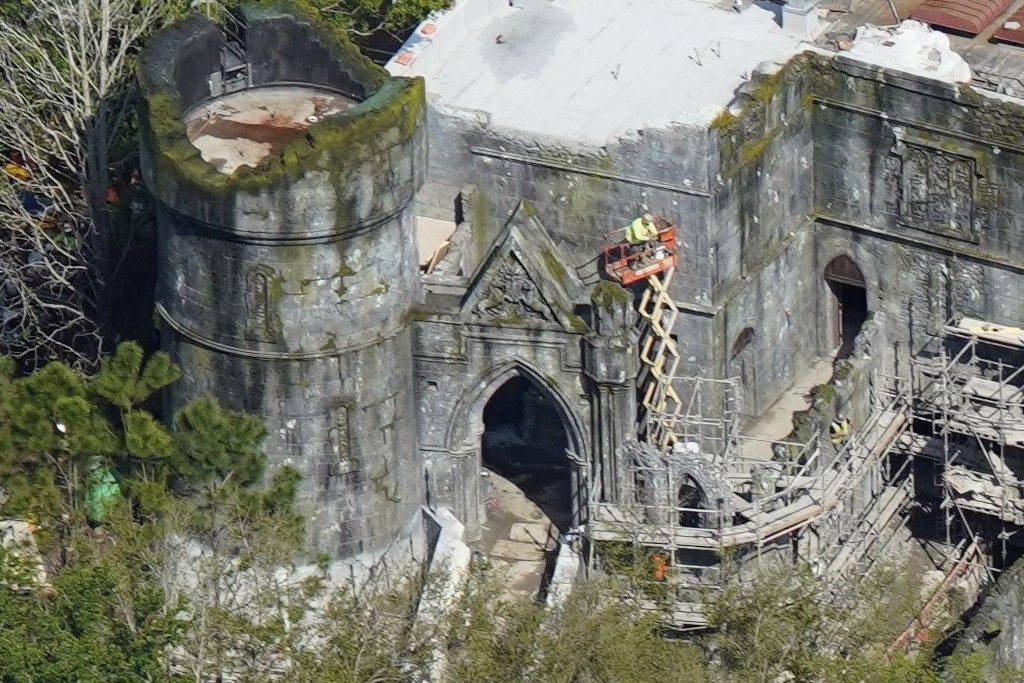 Entry to the interior queue (Photo by Reverse Imagineering)

Today’s Magical Creatures lesson will be on the Blast-Ended Skrewt. This hybrid magical creature is an invention of Hagrid’s, and it has the power to shoot fire from its blasting end. Rumors have us passing through Hagrid’s Skrewt laboratory in the queue, on our way to the ride.

And speaking of the ride, we will board specially designed coaster trains that are near-perfect recreations of the same flying motorbike we see Hagrid piloting in the films. Guests will be seating 2 per row, 14 passengers per train (and no, Hagrid will not be seated in the front row with you). Riders may choose to sit in either the motorcycle seat or the sidecar, each with their own unique experience. 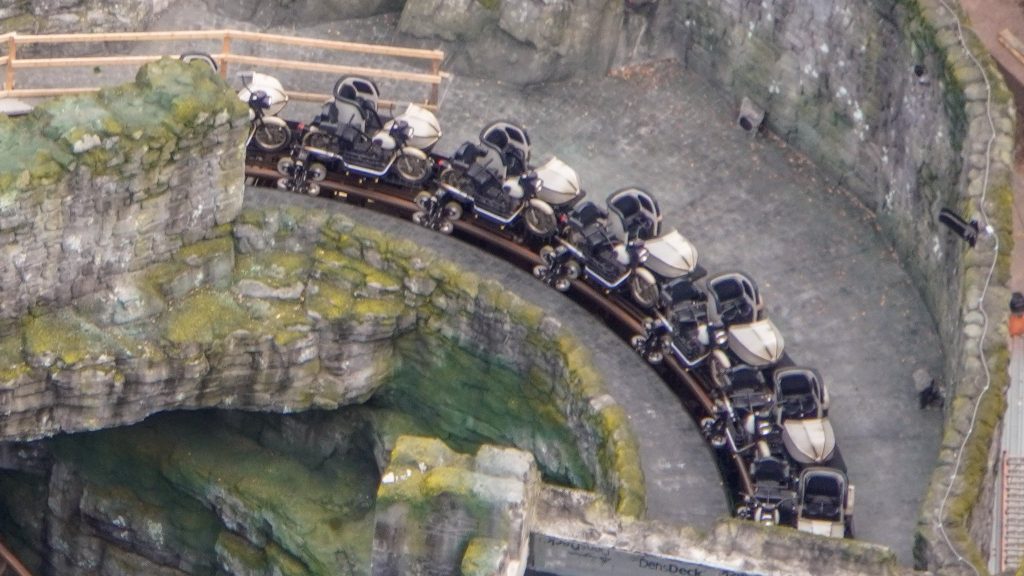 Aerial view of the ride vehicle (Photo by @bioreconstruct)

Now remember, guests have not ridden the coaster yet, so the following is based on what we can see from aerial photography, officially released details, and rumors. The ride begins with our train rolling forward out of the load station, curving to the right, into a partially covered area. We can see pumpkins and various pots and cauldrons laying about. Up ahead is a thestral carriage. While we cannot see the thestral, we can hear it, and maybe see a little motion of its carriage.

Still rolling along we’re now completely outside and up ahead is a directional street sign and a wagon. Our train begins to waggle along banked track right and left, before we make a sudden turn to the right. In an instant we enter our first full coaster launch. It sends us straight ahead, between the queue building on our right, and the massive Gothic ruins on our left. We curve to the left under the ruins, pass the ride entrance on our right, and head straight into a round wooden stable house. 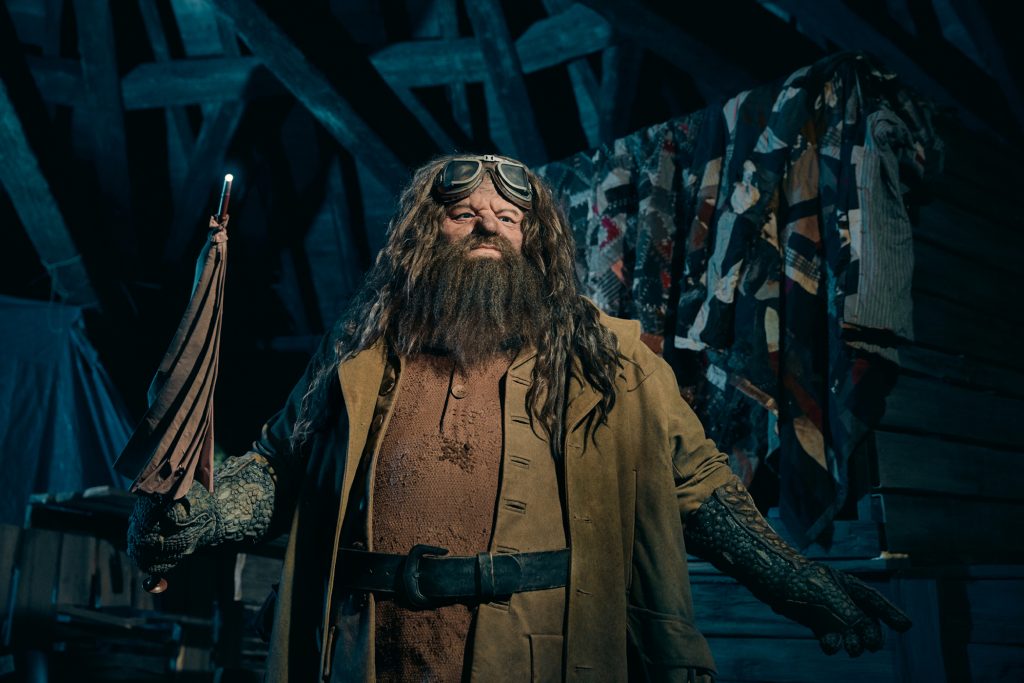 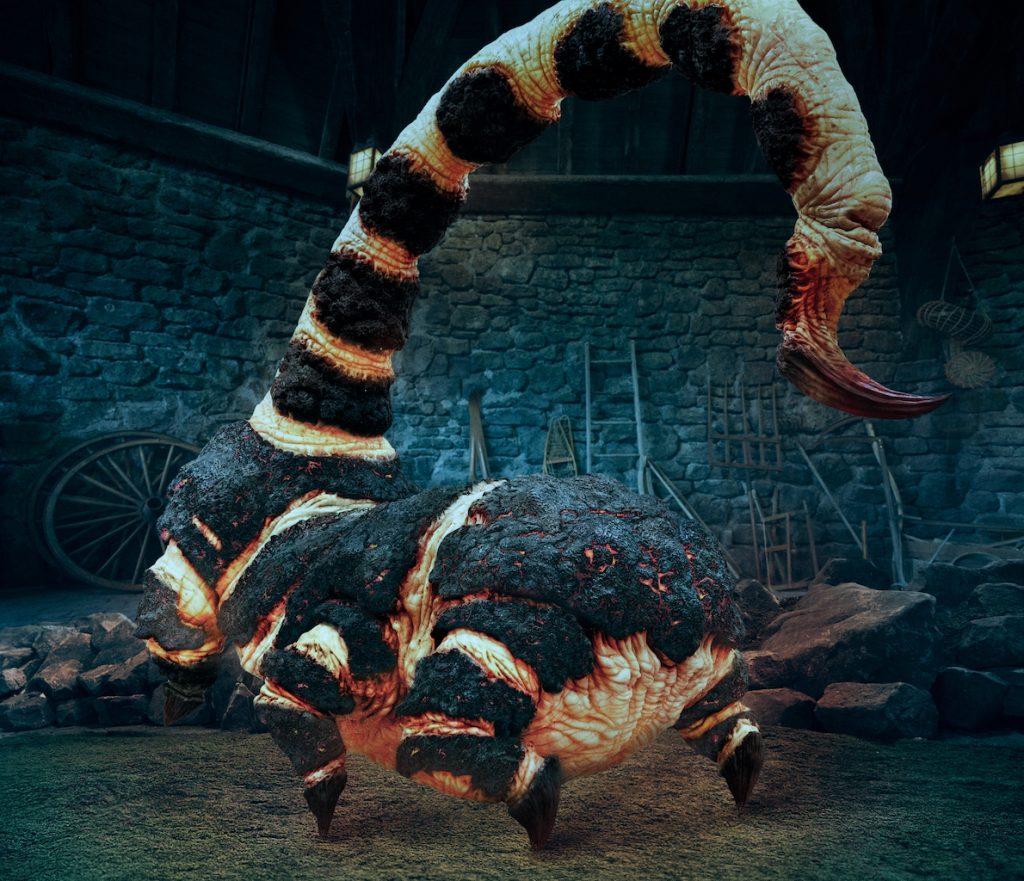 Entering the round structure we see Hagrid standing inside along with a creature. We curve around to the left slowly as he talks to us. Hagrid stands 7 and a half feet tall, and is a fully articulated animatronic figure. Standing next to him is a fully grown Blast-Ended Skrewt. This thing looks like across between a scorpion and a crab. It’s about 8 feet long and it’s long tail is 10 feet above the ground. Once the Skrewt starts smoking, Hagrid sends us on our way for safety.

We exit the round structure and head straight across a bridge over a central pond. Suddenly our train goes from a slow roll to a fast speed, and we’re launched again, right up into the air. We fly right through a massive broken window on the front of the Gothic ruins, curve to the left, fly under the ruins, make a near figure eight over the water, before heading back towards the ruins once more. This all happens very fast, and will likely be the first big thrill moment on the ride. 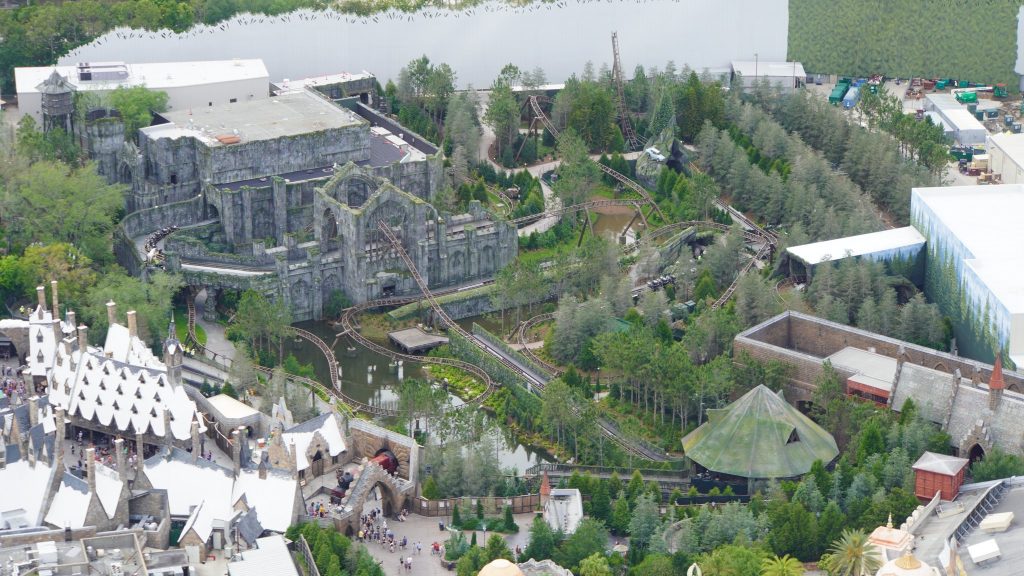 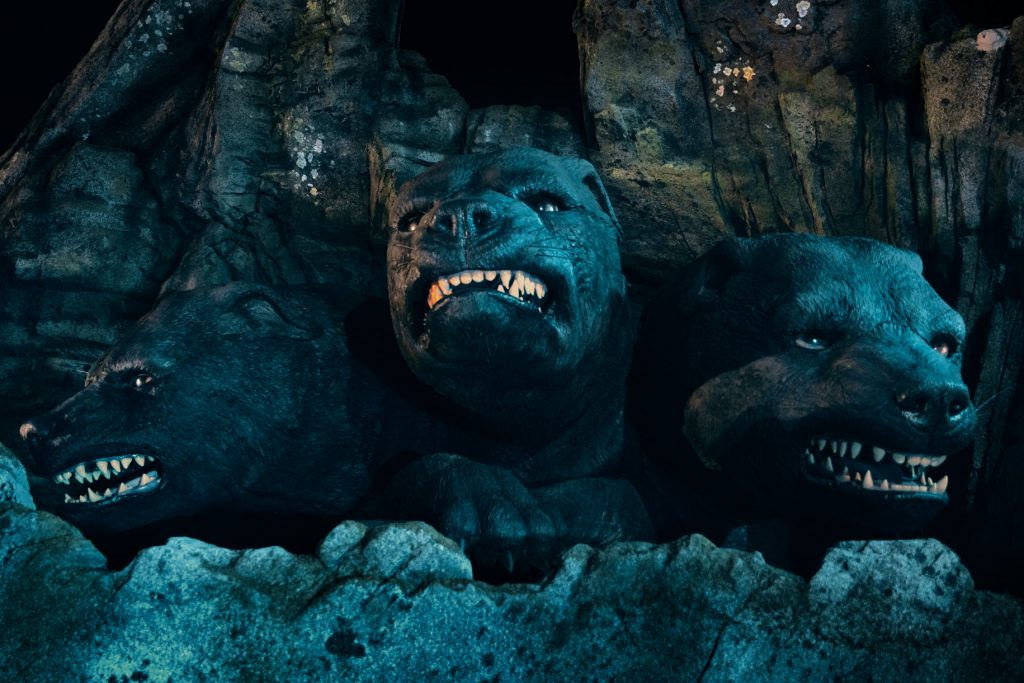 Without stopping, our train launches once again, this time towards the back of the area. We curve around to the right, make a full looping curve, before finally slowing down. On our left we see Fluffy, the three-headed dog. This massive animatronic figure weighs 8,000 pounds, and will be barking and snarling at you as you pass by.

After passing Fluffy, we make a sharp turn to the left. Now, up ahead we see a cave entrance. Perched atop the cave is the Weasley’s flying Ford Anglia. Looks like it may have crash landed here. And if you look very closely, you may even spot some of the mischievous Cornish Pixies. Maybe that’s why the car crashed? The Pixies are 13 inches tall, and there are actually 20 of them hidden throughout the entire ride! 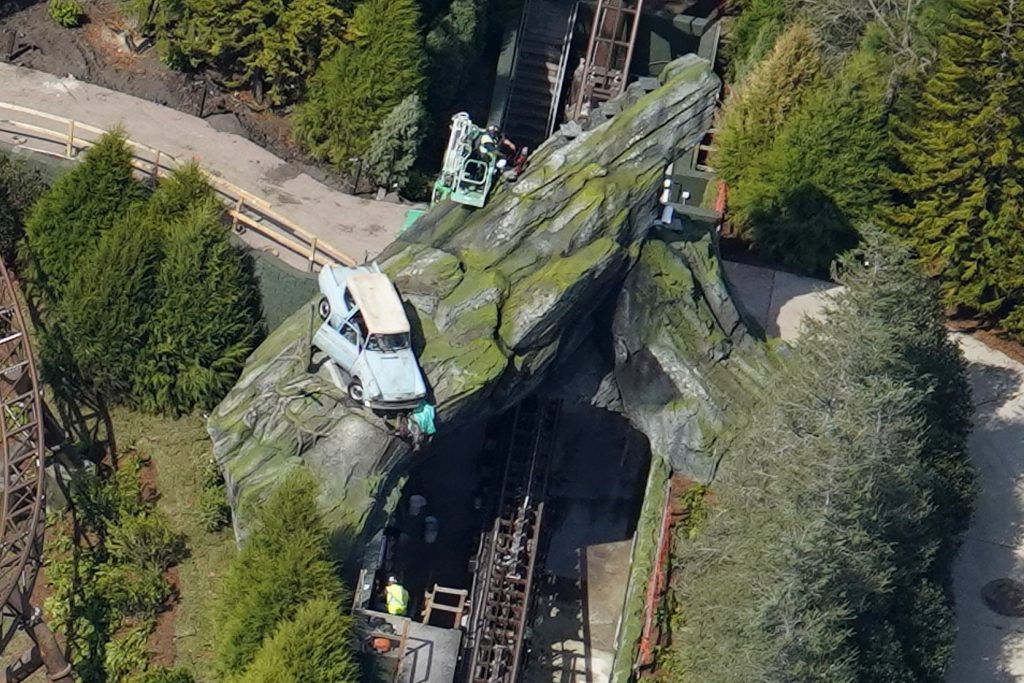 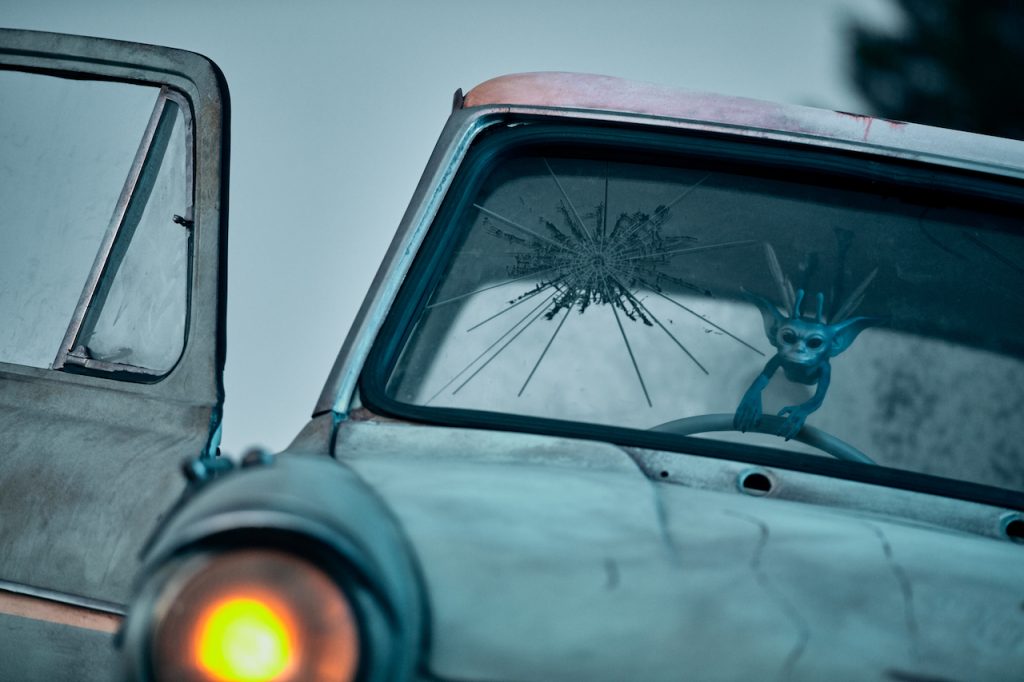 After falling down backwards, we hit another launch to keep our momentum going. We pass through a small rock structure, then rotate up a helix, and enter another cave. This time it’s dark, very dark (because we’ve entered a tall show building for the ride). Still moving backwards, we begin to slow. It gets even darker as we curve to the side. We stop.

We’re surrounded by the Devil’s Snare. It’s a perilous plant from the Wizarding World that’s known to wrap its tendrils around anything it finds. We see vines heading straight for us, but then suddenly — we drop! We drop straight down, 17 feet. 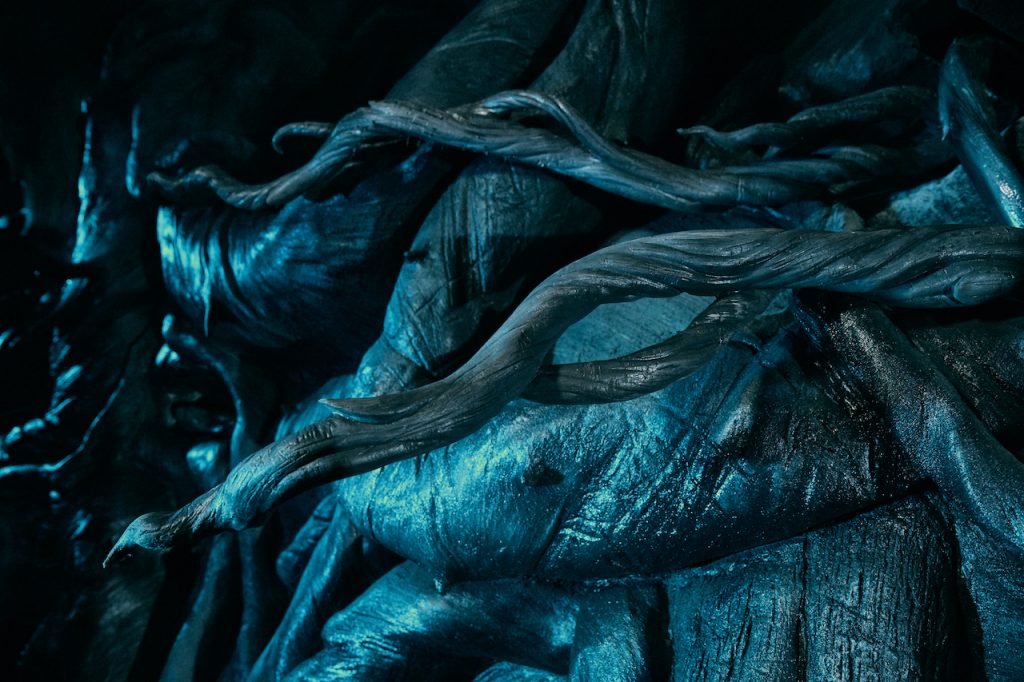 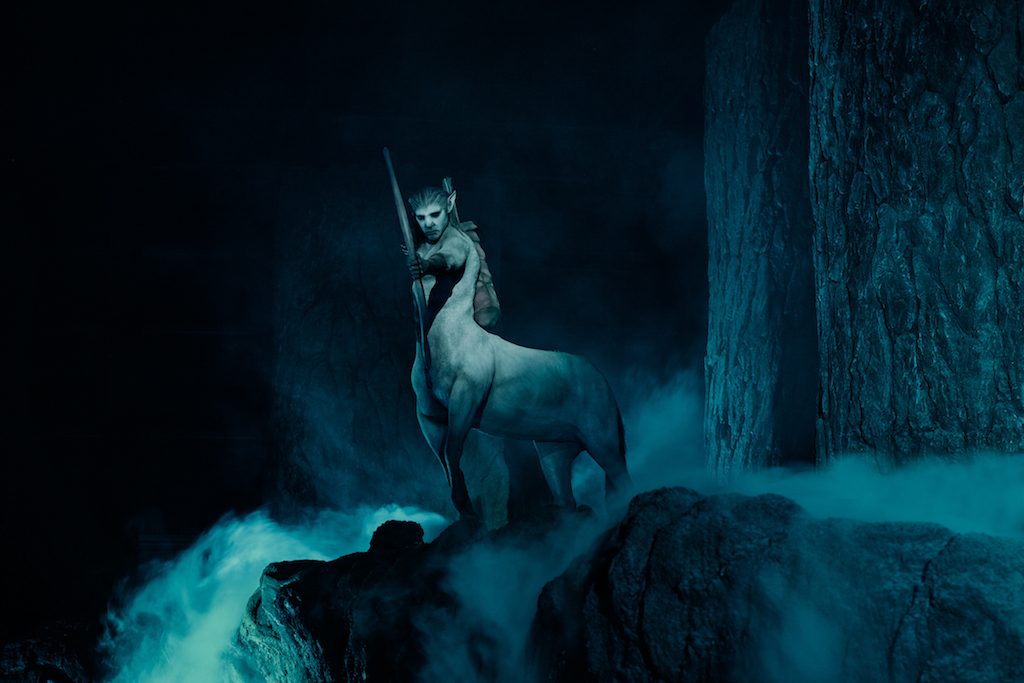 Now that we’ve escaped the Devil’s Snare, we’re not out of the wood’s yet, literally. We’re deep in the dark Forbidden Forest, and as we all know, the forest isn’t safe. As we begin to roll slowly forward we encounter a Centaur, a magical creature with a human head, torso and arms, joined to a horse’s body. He’s holding a bow and arrow — but is he friend of foe?

Not before long we make our escape from the Dark Forest, emerging back into the light (and out of the show building). We can see nothing but trees all around us and our train is sent into one last, super powerful, forward-facing launch. We zoom forward, turn the left as we raise back into the air. We pass the flying car on our left and we pass the first scene on our right. We curve to the right and enter the Gothic ruins from the back. We may even catch a glimpse of another train flying over us as we move through the ruins. 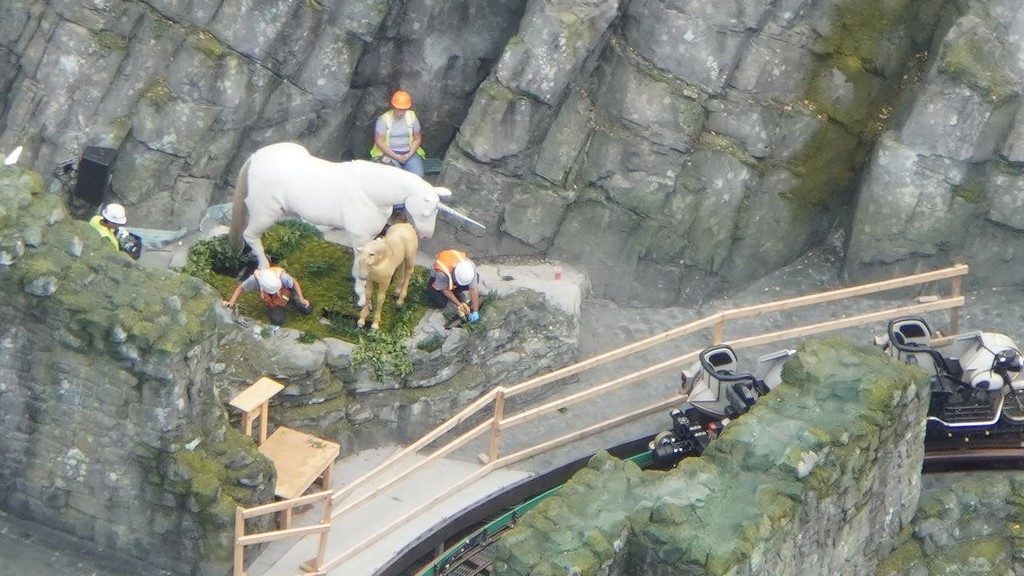 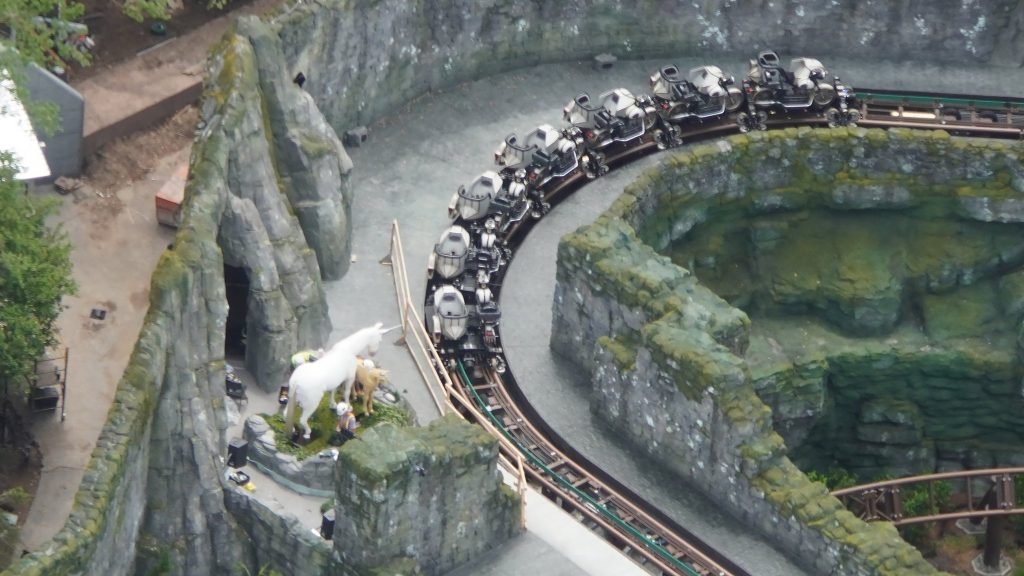 Up ahead, before our journey comes to a close, we encounter one last surprise. There is a majestic white unicorn ahead, and she’s there with her young foal. We pass by them as we turn to the right to enter the unload station. It truly was a magical adventure.

Of course, there’s a lot more details we aren’t yet sure of to be experienced along the way. And with speeds up to 50 mph, along with seven coaster launches, a backwards section, and a drop track, this is already going to be an incredible ride — even if it wasn’t also populated with Magical Creatures from the Wizarding World! Add in on-board audio with motorbike sound effects, Hagrid talking to us during the trip, and hopefully a soaring musical score, and this could be one of the greatest rides Universal has ever created! 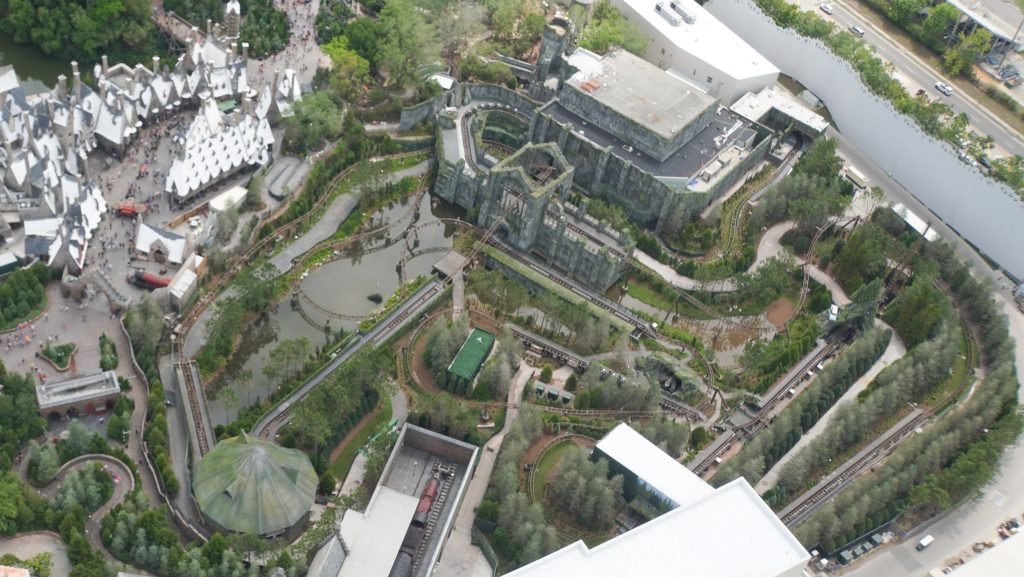 Will There Be Soft Openings?

Often times in the days leading up to an official ride opening we may see “Technical Rehearsals,” also known as soft openings, where regular park guests get an opportunity to experience the attraction prior to the official grand opening.

Rumors have team members getting a chance to ride first, maybe by the end of the week. Which could put soft openings as early as the weekend. And with it being Memorial Day weekend, there will be more than enough guests to pull from in the park who would be more than willing to test the new ride. 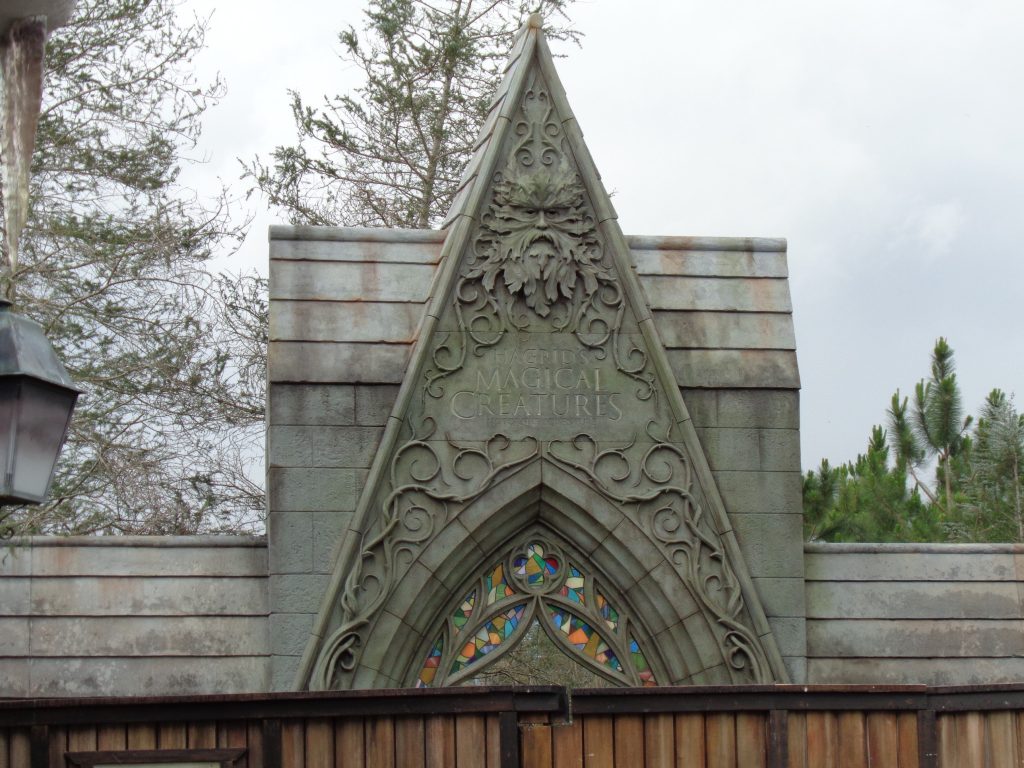 It’s always possible that we don’t see soft openings until after Memorial Day. We may never see any soft openings at all. And, even if there are soft openings, there is no guarantee for how long the ride will remain open. Also, some elements of the attraction may not be operating during this testing period. Stay tuned to the website for more updates on possible soft openings.

The only way you can be absolutely sure to get your chance to ride Hagrid’s Magical Creatures Motorbike Adventure is to purchase your Universal Orlando tickets now and schedule your visit for June 13th or later, when the new coaster is set to officially open. (Remember, riders must be at least 48″ tall to ride.)

Stay tuned for details about this ride as they happen. Subscribe to the news feed or enter your email below to never miss an update. Main Photo: @CarpetUmbrella / Ground Photos: Alicia Stella / Aerial Photos: @bioreconstruct / Official Images: Universal / Other Photos: As Credited