One of the more interesting projects we’re following here at ParkStop is the new roller coaster coming to the Jurassic Park section of Universal’s Islands of Adventure. Coasters are fun to watch from a construction standpoint because we can actually get a good look at it while they go up. Universal Orlando has yet to announce this project though, and it has left many to wonder about how this new ride will fit into the Jurassic universe.

Jurassic World: The Ride opened at Universal Studios Hollywood last year, right around the time when demolition related to our own Jurassic project here in Orlando started heating up. This led many to wonder, is our Jurassic Park: River Adventure going to be getting the “World” treatment as well? And will the new roller coaster feature Blue and Chris Pratt’s character? Or will our land get to stay “Park”? Let’s go over some of the possibilities, some of the rumors, and my own thoughts on what we might actually end up with. 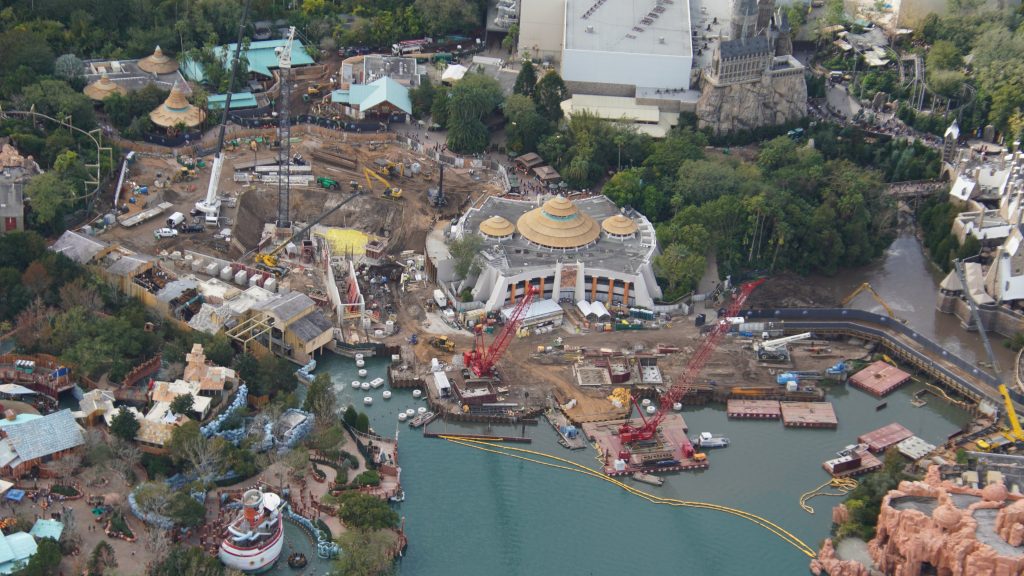 Let’s start with some of the facts, (albeit unconfirmed ones). It appears that Universal is building a new roller coaster in the Jurassic Park section of Islands of Adventure. The new ride will be located within the former Triceratops Encounter area, as well as in front of the Discovery Center and over a section of the park’s lagoon. The ride is rumored to be manufactured by Intamin Rides, (well, at least the track is). We’re expecting two launches, a top-hat maneuver, and a few inversions. It should be pretty thrilling.

Getting into some more rumor-y territory, we’re hoping for at least one show scene for the new coaster, and everyone’s best guess is that it will feature the velociraptors in some way. There was a trademark filed for Velocicoaster, that many believe could be the name for this upcoming coaster. Speculation for a scene in a raptor paddock to kick off the ride, and perhaps another with some screen-based raptors chasing us to close out the ride, are often discussed when the new coaster is brought up.

When we talk about these scenes, and the possible raptor paddock for the ride, it’s usually Blue the raptor that comes to mind. Blue is the sole surviving velociraptor from the first two Jurassic World films. And when we think of Blue, we think of Owen Grady (Chris Pratt’s character) from the film series as well. Who else would be better suited to host a ride starring raptors? (I mean, besides Alan Grant from Jurassic Park of course. At least Owen actually likes raptors. Alan is just haunted by them. “Alan!”)

So, if the new roller coaster is to star Owen Grady, and is to feature a raptor paddock that holds (at least one of) the raptors from the Jurassic World film series, that of course means the land will need to be rebranded as Jurassic World… Right? Maybe not. 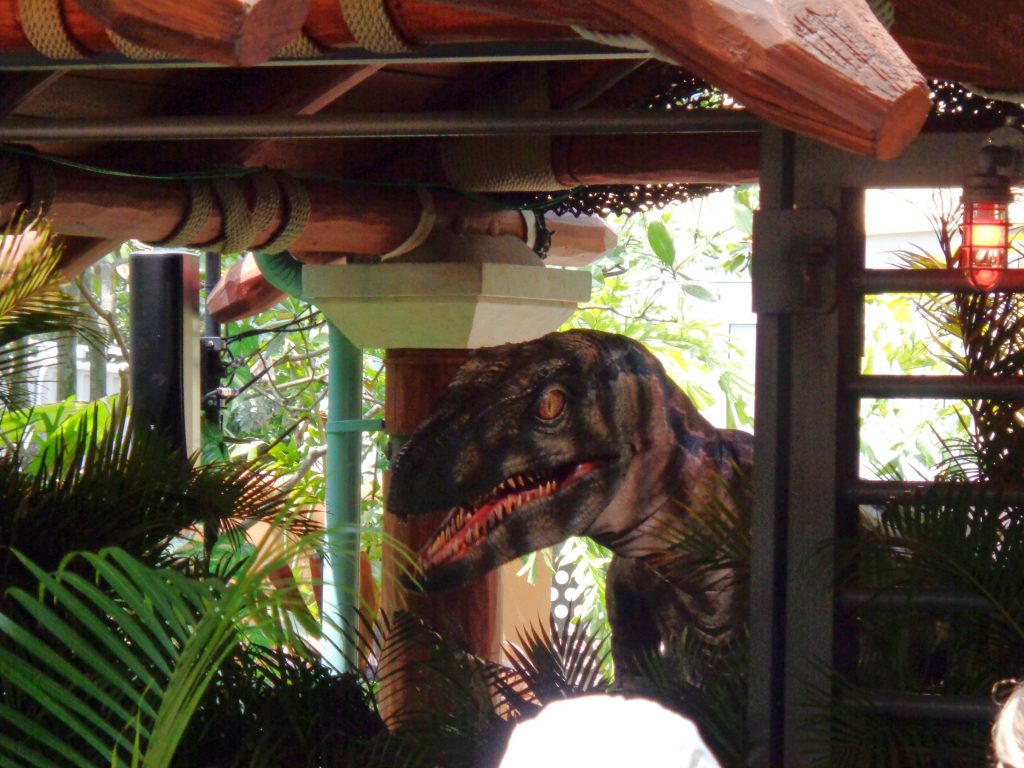 Blue meeting guests from her temporary area while construction is ongoing

We already have Blue available for photographs in the Raptor Encounter meet and greet, and the land is still branded as Jurassic Park. I was talking with the “animal trainers” while waiting in line for a photograph one day, and they told me that Blue is somewhat of a diva now after starring in those Jurassic World films. I like that that they’ve come up with their own little backstory to make the conflicting timelines make sense.

Now, I am going to make some assumptions here, but if the people in charge at Universal Orlando don’t see a problem with having a dinosaur from Jurassic World in a land called Jurassic Park, I bet they wouldn’t mind that dinosaur being the star of a new roller coaster either. But we’ll get into how that could work in a minute. First, let’s jump to the fate of the River Adventure. 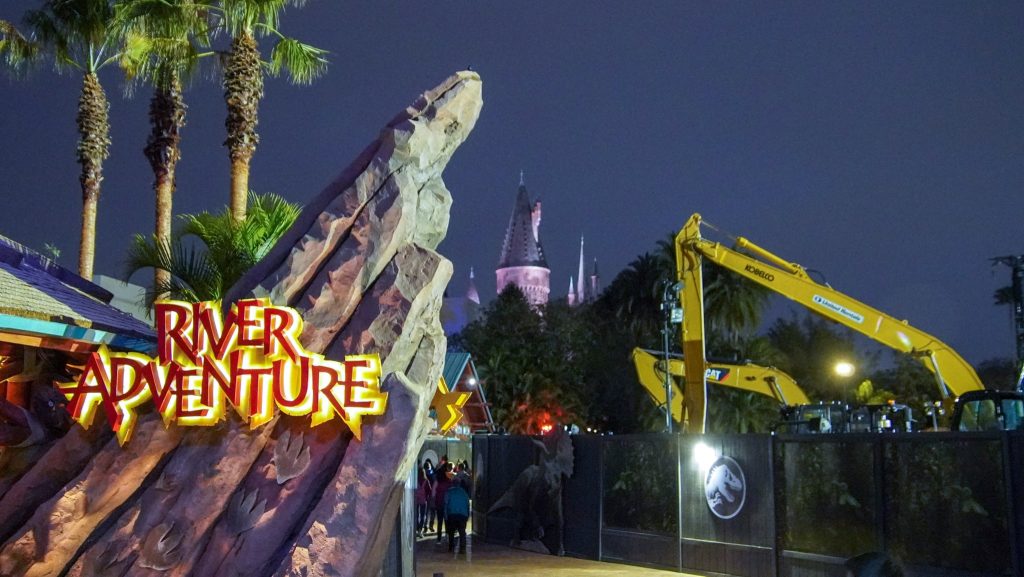 As Jurassic World: The Ride was preparing to open, the line being heard from sources within the company appeared to be “if it does well in Hollywood, we’ll change the one in Orlando too.” However, the new rumor being reported is that Orlando essentially had to decide to either convert the River Adventure to Jurassic World, or, build a new roller coaster. With only so much budget to go around in Orlando (and a whole new theme park being built a couple miles away,) there’s just not enough for both. Reportedly.

Given the visible construction, I’d say it’s safe to say they with the new roller coaster. I can see how they might feel that an entirely new attraction might garner more attention and bring in more guests than a re-themed one. Now, this is isn’t to say that the River Adventure does not need some attention. I acknowledge that some of the dinosaur animatronics have seen better days, I just think they thought a new roller coaster would be a bigger draw than rebranding the existing ride. Maybe someday River Adventure could see some upgrades, while still remaining River Adventure. 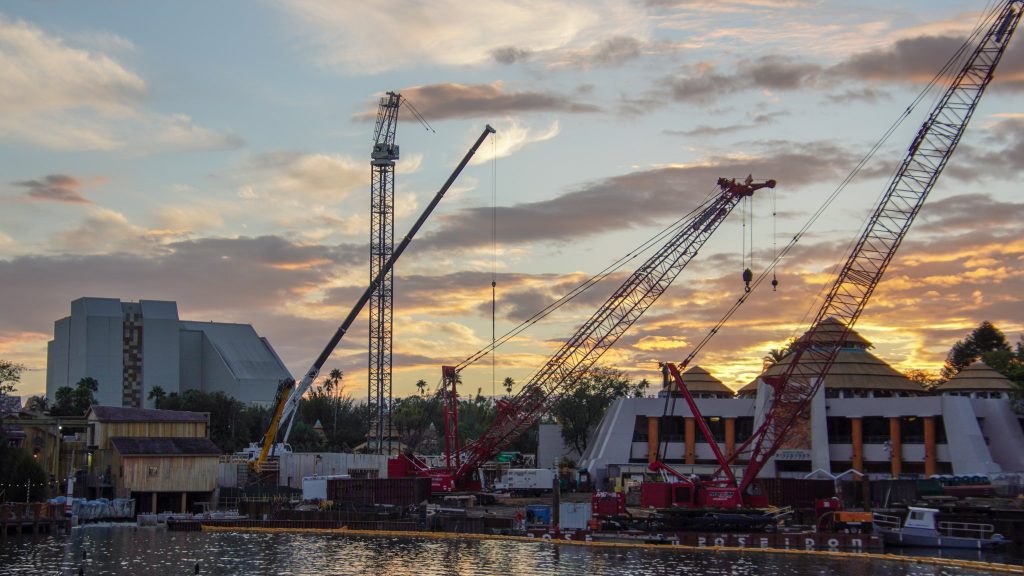 The problem with rebranding the River Adventure ride, is that it doesn’t exist in a vacuum. It is set within a large Jurassic Park branded land. Unlike the ride in Hollywood, which only had a small mini-land to re-theme, the land in Islands of Adventure contains several quick service locations and other structures that would all need to be reimagined. And while a new coat of gray and blue paint would work for most of it, the Discovery Center may need a touch more attention.

The Discovery Center, Islands of Adventure’s original park weenie at the back of the lagoon, is a beautiful recreation of the Visitors Center from the first Jurassic Park film. If one were to re-theme the entire land to Jurassic World, this structure would likely be the biggest challenge. How does one even re-theme it to fit within Jurassic World?

Paint it blue and gray? Instead of looking like something from Jurassic World, like that film’s Innovation Center, it’ll just end up looking tacky and not please fans of either film series. Knock it down and build the Innovation Center from Jurassic World? Seems like a lot of money to spend on something when you’ve already got a perfectly good structure that currently serves the same purpose. Re-theme it as the abandoned Visitors Center in the restricted area of Jurassic World? Would regular park guests want to eat a burger in a dilapidated old building? And from a business standpoint, does Universal really want a decrepit-looking, rotting structure sitting across the lagoon to be one of the first things guests see when entering the park?

Again, that’s me trying to put myself in the shoes of those that actually have to make these types of decisions. It must not have been an easy task. And that leads me to where we are now, (or at least where we think we are based on rumors). Jurassic Park is staying Jurassic Park in Islands of Adventure. What does that mean for the new roller coaster? How will it fit within this Jurassic Park-branded universe?

InGen. That’s the bioengineering company John Hammond founded to bring dinosaurs back to life. It exists in both Jurassic Park and in Jurassic World. If they were to theme the new roller coaster ride as an InGen research facility it could exist within both worlds simultaneously. Raptors were never public exhibits in either set of film trilogies. They were too wild to be part of the tour in Jurassic Park, and they were part of a behavioral research program headed up by Owen in Jurassic World.

Without being a guest-facing exhibit, the raptor paddocks on the roller coaster ride can be themed as a plain research facility. InGen logos replace Jurassic Park or Jurassic World logos, since this area would’ve been designed for company personnel only, and not theme park guests. It would solve many of the story issues, by placing it outside of canon for either film series.

I believe wholeheartedly, if they were to go that route, that sooner, rather than later, they would remove Jurassic Park from Islands of Adventure. This might be a “can’t have your cake and eat it too” type of situation. This is a company that has shown time and time again that they’re not very interested in nostalgia, or keeping older attractions around when something newer and shinier is available. And having two dinosaur themed lands, based on the same franchise, would most certainly mean the axe for the older one. 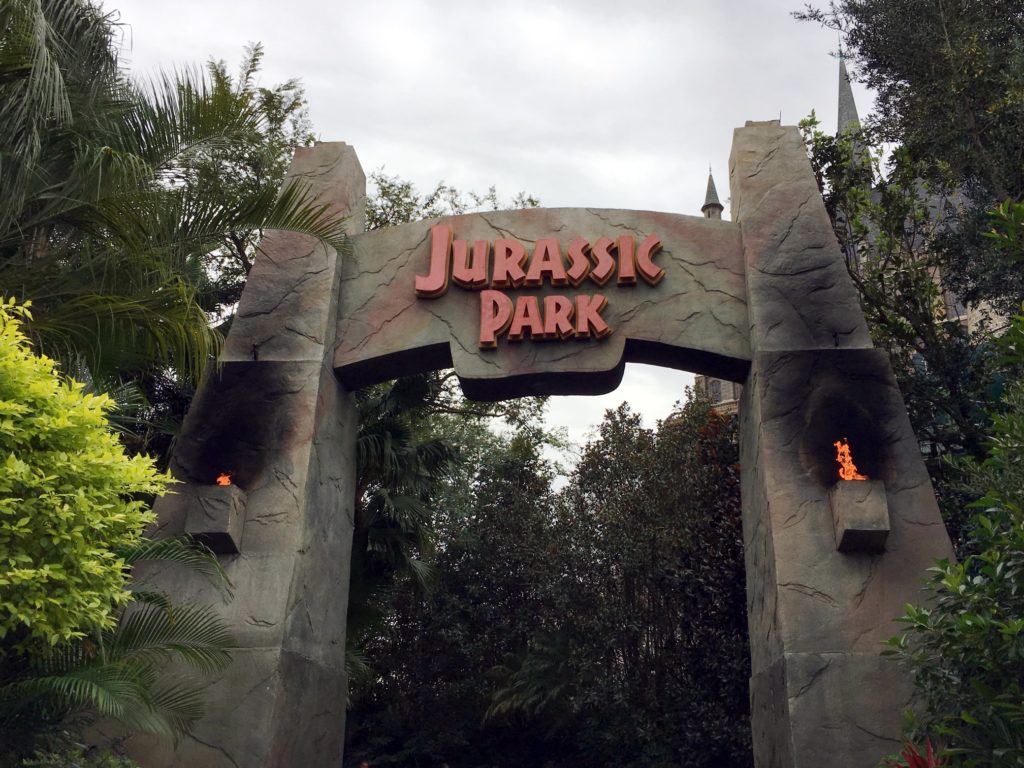 I believe the land in Islands of Adventure will remain Jurassic Park, at least for the next few years—if not forever. I could see the new roller coaster themed as an InGen research facility with a raptor paddock and electric fences. And while this will leave the land open to the possibility of a re-theme to Jurassic World someday, I don’t see it happening any time soon. At least not until after Epic Universe opens. And probably never.

What do you think? Would you be happy if they left Jurassic Park themed as Jurassic Park? Would you rather see a complete retheme? Or would you prefer they start over at the new park, and maybe even close down Jurassic Park for good? Leave a comment below with your ideas and stay tuned for more coverage on the new roller coaster! 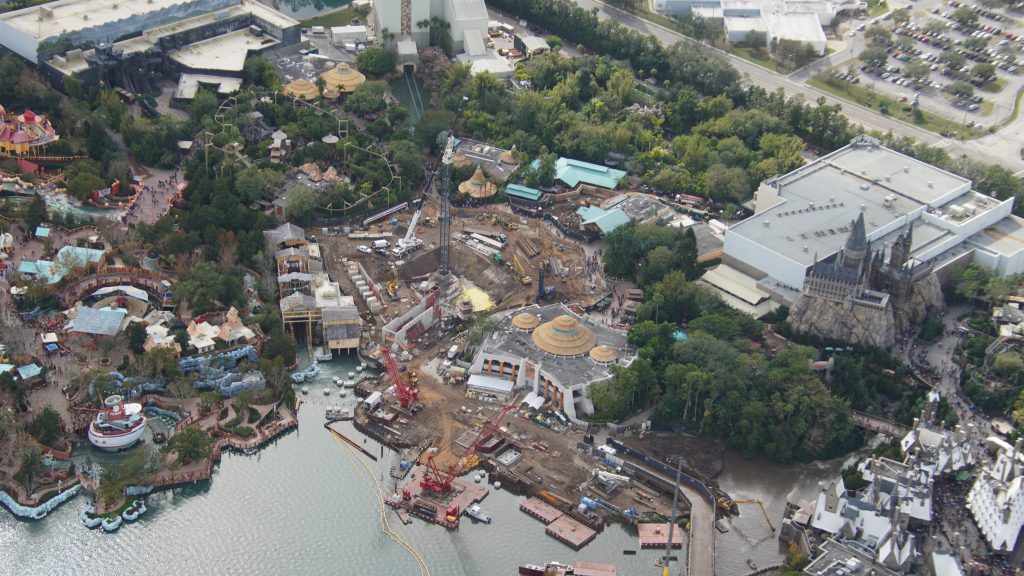 Special thanks to @bioreconstruct for the amazing aerial and on the ground photography. Be sure to subscribe to his Twitter feed for great theme park updates.

The new Jurassic coaster is rumored to be opening by Spring 2021. If you’re thinking about booking your next trip to Universal Orlando, request your free vacation quote from our good friend Elizabeth at Destinations in Florida. She can help you get the best deals on tickets, your on-site hotel room, and more — and her services are completely free!

Stay tuned for more news on this exciting new coaster as it happens! Subscribe to the news feed or enter your email below to never miss an update. Aerial Photos by @bioreconstruct | Other images as captioned | Graphics by Alicia Stella