The brand-new roller coaster ride, Hagrid’s Magical Creatures Motorbike Adventure, opened last Thursday at Universal’s Islands of Adventure to rave reviews. Like most new attractions, this one has been facing some problems during its first week. If you’re planning to ride for yourself, you may want to create a game plan ahead of time and be prepared to wait… a lot.

From capacity issues and technical difficulties, to near daily thunderstorm interruptions, it seems that the poor thing has been struck hard by Murphy’s Law. Now, with the ride only opening at midday to give them extra time to iron out some of the issues each morning, let’s take a look back at the new coaster’s first week of operation — and when might be the best time to get in line yourself. 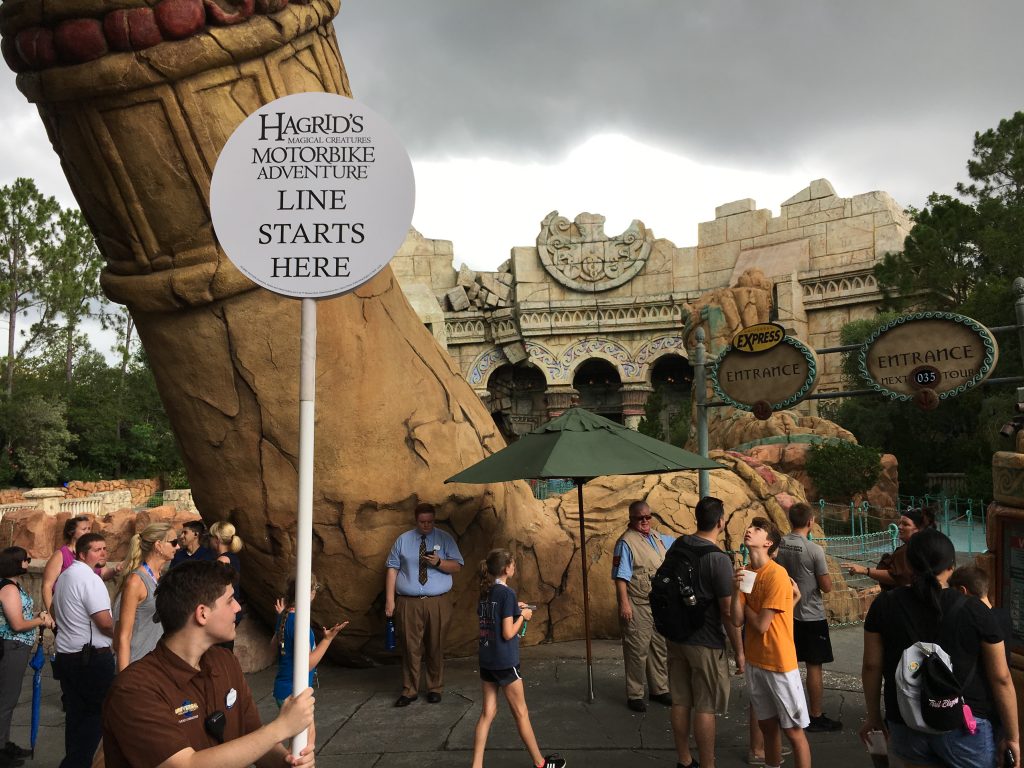 First off, I do want to say that I love this ride. It’s definitely in my top 3 for all of the Orlando theme parks. The ride’s combination of exciting coaster features and highly themed elements work together in such a fun and unique way that makes for a near-perfect experience. And after a seemingly never-ending string of screen-heavy fare at the Universal parks, this is certainly a breath of fresh air.

I’ve ridden the new Hagrid coaster twice so far, once on opening day and again just yesterday. On opening day I arrived around 5am and waited a total of 6 hours, two of which were after the ride officially opened at 9am. Yesterday I waited around 3.5 hours. Again, only about two of them after the ride actually opened for the day around 11am. 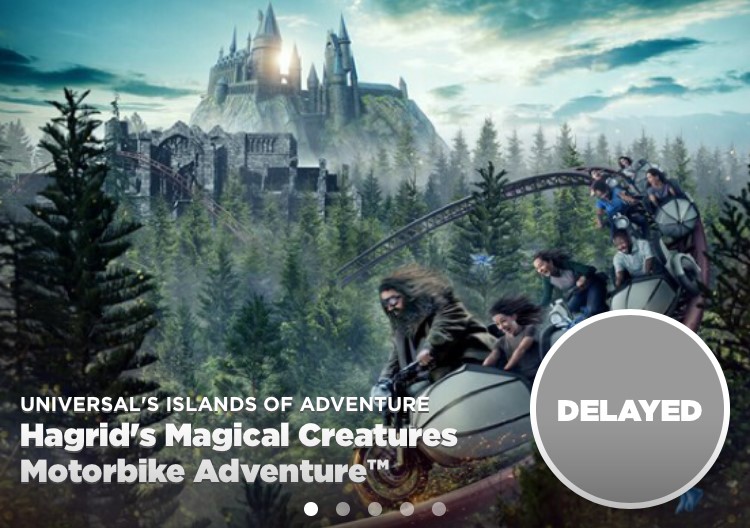 While the ride opened on time at 9am on opening day, that has rarely been the case in the days following. In fact, on Monday evening Universal sent out an update on social media announcing that the Hagrid ride will be opening “at midday for the next couple of weeks” so their team has more time for daily maintenance and technical support.

With the ride not opening until around 11am to noon each day, and afternoon thunderstorms rolling in just a few hours later, that has not left much time for the swarms of guests wanting to ride this enchanting new coaster to get their chance. I arrived to get into the holding line, (set up in front of the now defunct Sindbad theater,) yesterday around 9:45am and was able to ride by 1:30pm. Unfortunately, the ride ran into some serious issues following my ride and barely anyone else was able to get on for the rest of the day. 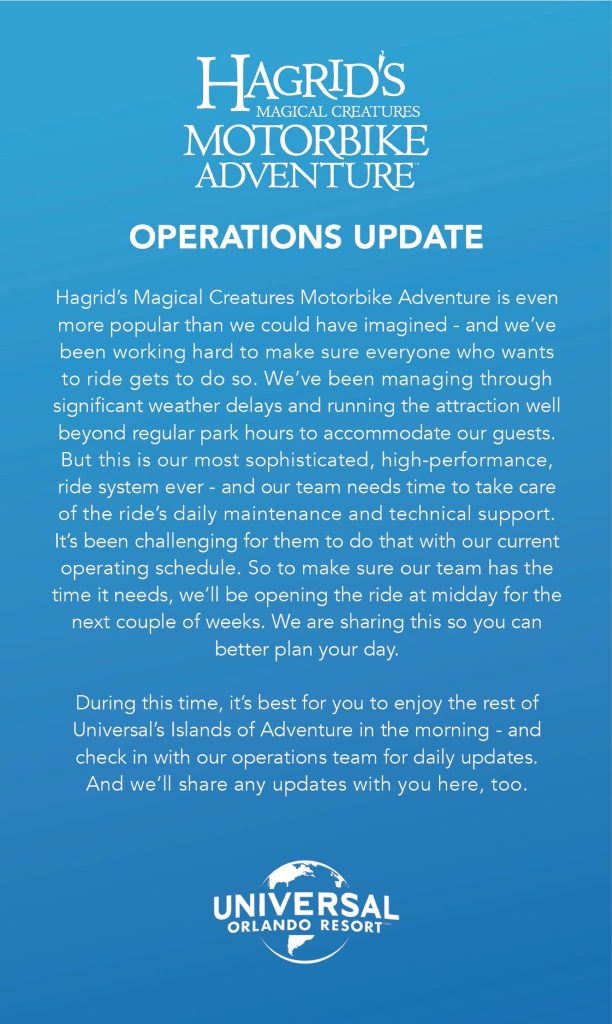 Of course, yesterday is not an exception, but seems to be the rule when it comes to how many riders the ride has seen over the course of the week since it first opened. While I make no claim to know exactly what the problems are that the ride might be facing, I can say that the number of riders it has seen per day has been disappointing. I have heard that Universal has put a call out for any ride techs available to work overtime and pick up extra shifts, so I can see that they obviously want to get the issues resolved as soon as possible.

So, what have the numbers looked like for the last 7 days? Not great. To start, and for comparison’s sake, Harry Potter and the Forbidden Journey receives around 20,000 riders per day. For the last week, Hagrid’s Magical Creatures Motorbike Adventure has reportedly received less than an average than 4,000 riders per day. And keep in mind that that is an average. Some days the ride saw up to 7,000 riders, while others saw less than 2,000. 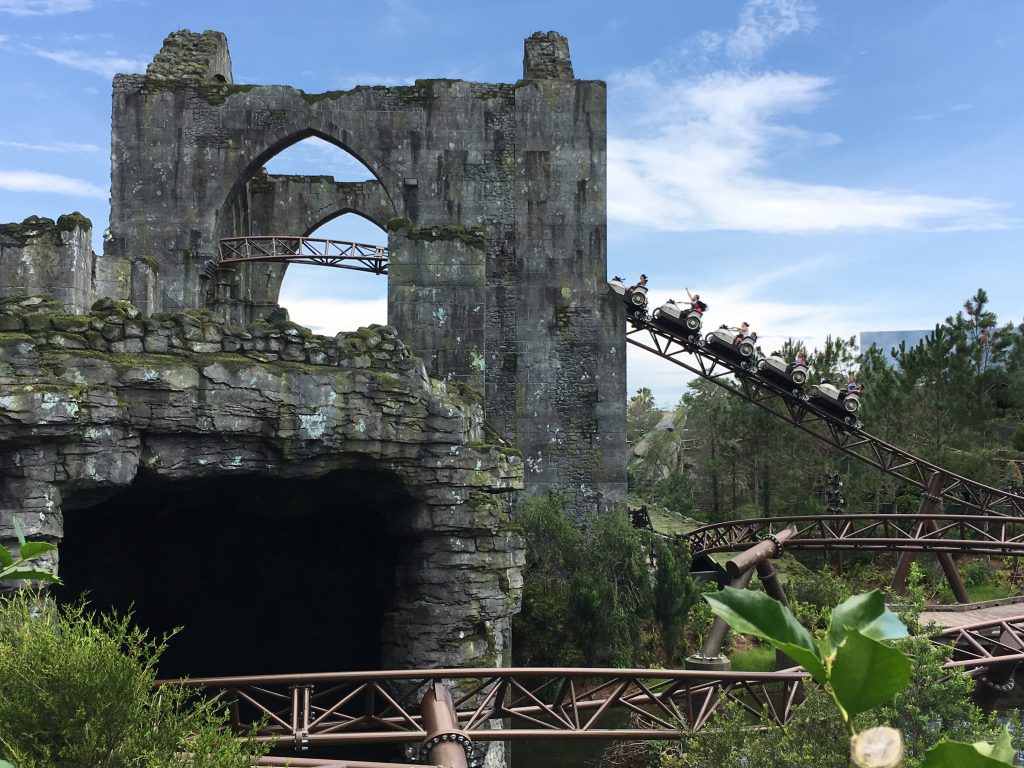 The new coaster is currently running 5 or 6 trains at a time, (when it is running). Theoretically, some claim it can run 10, or maybe even 12 trains at once. I have heard that the goal was to open with 8 trains, but the most they have had out at once in the past week was 7. And they only ran 7 trains for about an hour, until they ran into issues and had to close for an extended downtime. (Unfortunately, prior to putting that 7th train on, the ride was running smoothly with 6 trains that day.)

When the ride was running at its best it was getting 75 dispatches per hour, with 6 trains on the track. That’s 1,050 riders through in one hour, which isn’t bad for a new ride, if not for the fact that the ride has not operated much more than 5 hours total per day since opening day. If the ride had been up all day from open to close, it could see up to 12,600 riders a day, and with just 6 trains running. Instead, we’re seeing only about 4,000 riders a day. 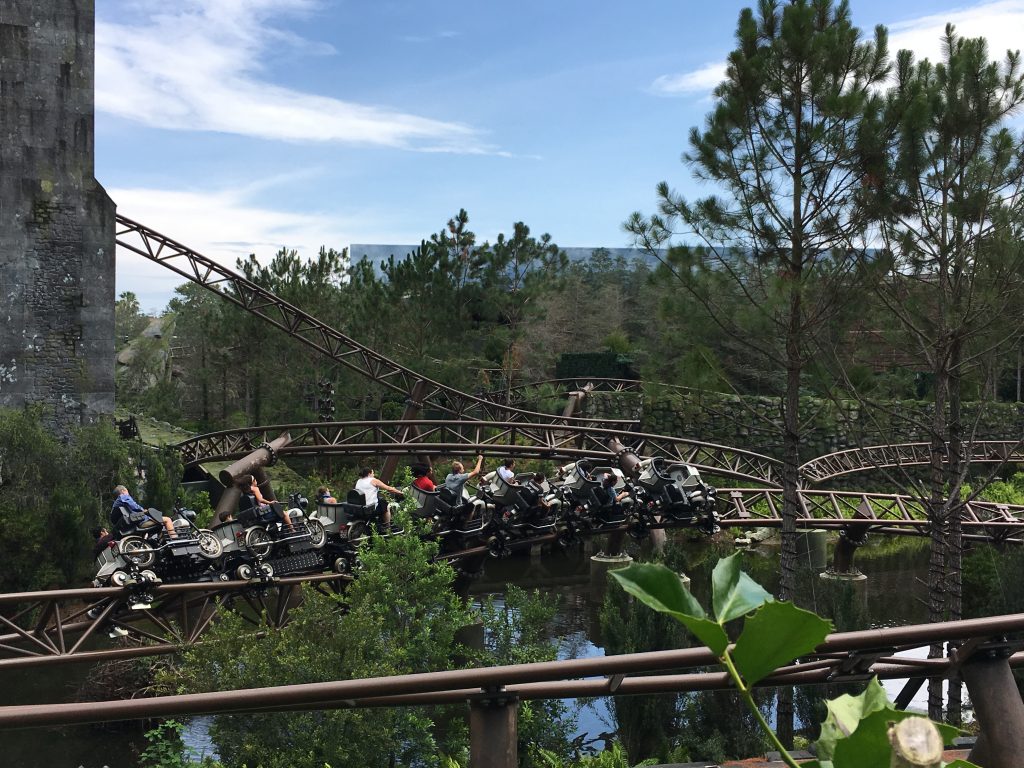 I wish I could say that capacity is getting better, but that doesn’t seem to be the case. In fact, the best day for ridership was Saturday the 15th, just a couple days after the grand opening. (That was also the day they attempted that 7th train.) Some of the days after that saw the lowest capacity, although that could partly be blamed on a slew of long afternoon thunderstorms those days.

However, yesterday it did not storm over Universal Orlando at all, and yet the ride still managed to be closed for most of the afternoon due to technical difficulties. Many guests remained in the queue after the ride went down yesterday afternoon, only to eventually be evacuated out in the early evening — some having waited more than 6 hours. The ride eventually opened for the last couple hours of the day until park close. Despite a lack of thunderstorms, the ride still performed in a similar way as other days when it did storm, operating for a few hours in the midday and a couple hours at the end of the day. 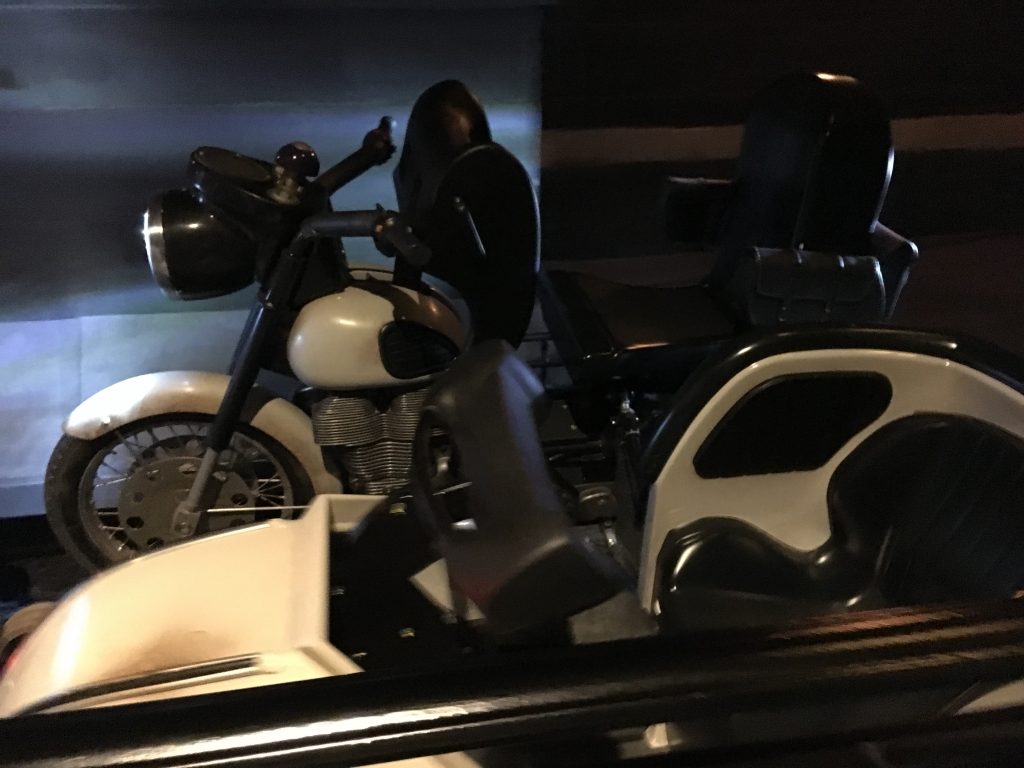 If the ride was running in tip-top shape, and, was running at the projected capacity they were hoping for this week, we would probably be seeing something like 18,000 riders per day, (1,500 per hour,) which is much closer to other rides like Forbidden Journey. Instead, we’ve seen less than a quarter of that each day.

One of the biggest complaints since opening day has been a lack of communication. For two of the three days after opening the ride opened around midday, but the guests that had lined up since 6:30am didn’t know that would be the case before the park opened. Universal made the announcement Monday night that the ride would officially not open each day until midday, however this announcement was made exclusively on social media, and not in an official blog post, which may have reached more people. 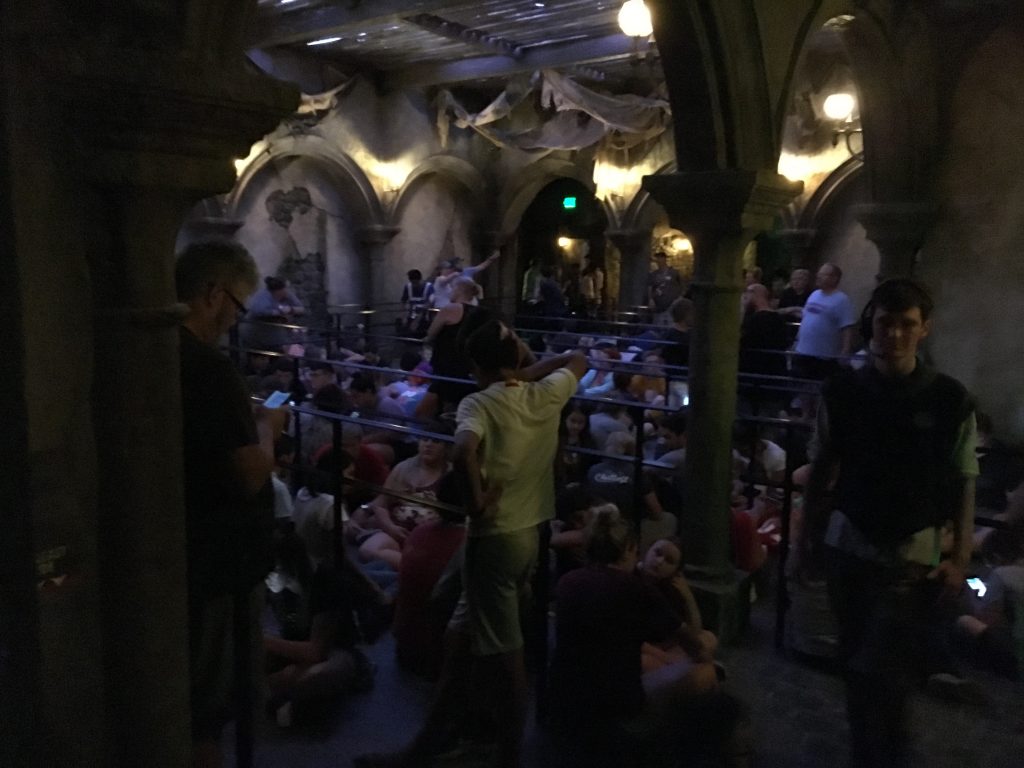 Those waiting inside the interior queue are not receiving clear communication on how long a downtime may be, or even how they are actually allowed to leave the queue and return. Periodic announcements are made over the PA system, but they are often vague and never give a clear indication of how long your wait may be, or what your options are while waiting.

I think it’s great that Team Members allow guests to leave the queue to use the restroom, get something from your locker, or retrieve drinks and snacks for the rest of their party. You’re given a return ticket so you can make your way back into line after. Unfortunately, this is not communicated to all guests as they wait. 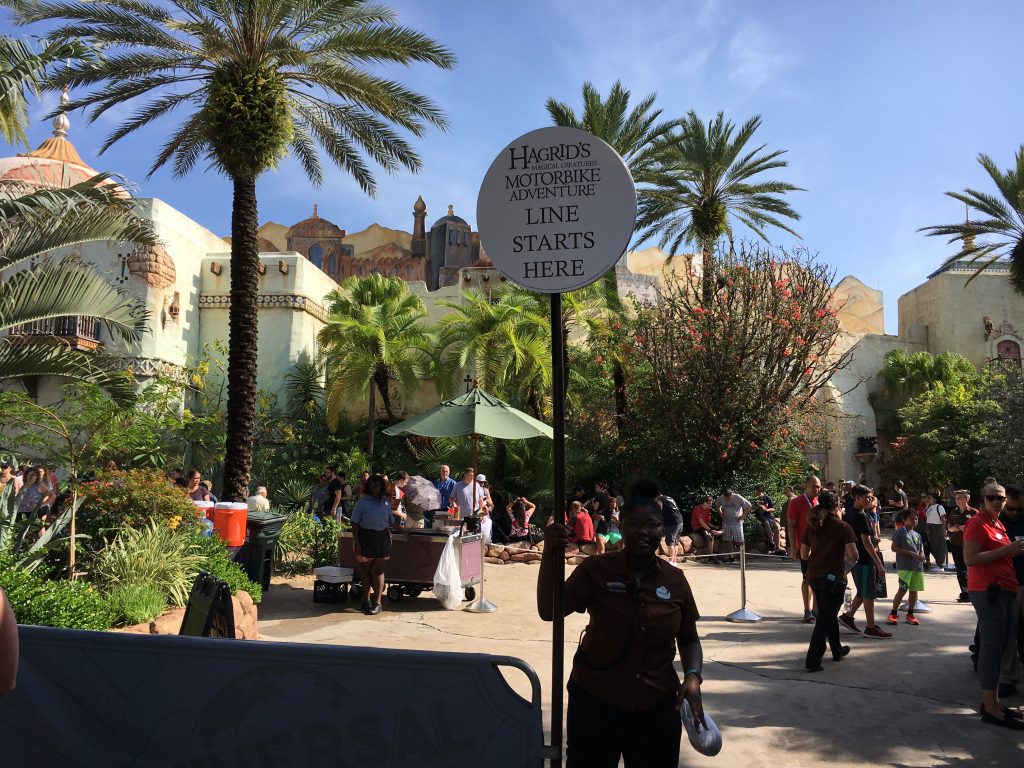 For the time being, and until some more of the new attraction’s kinks are worked out, your best bet on getting to ride is to arrive early, maybe around park opening, and get into line for the ride in Lost Continent. They are holding guests there until the ride is ready to start running around midday. There are tables with free ice water available, characters like Puss in Boots walking around to help entertain the kids, and popular music playing over the area’s speakers.

When you get into line they tell you the day’s secret password so you can leave to use the restroom or purchase snacks without fear of not being let back in. Team Members even let us know that members of your party can leave, enjoy the park for a couple hours, and return by midday as long as they have at least one member of their party remain in line for them, (sorry dads out there). 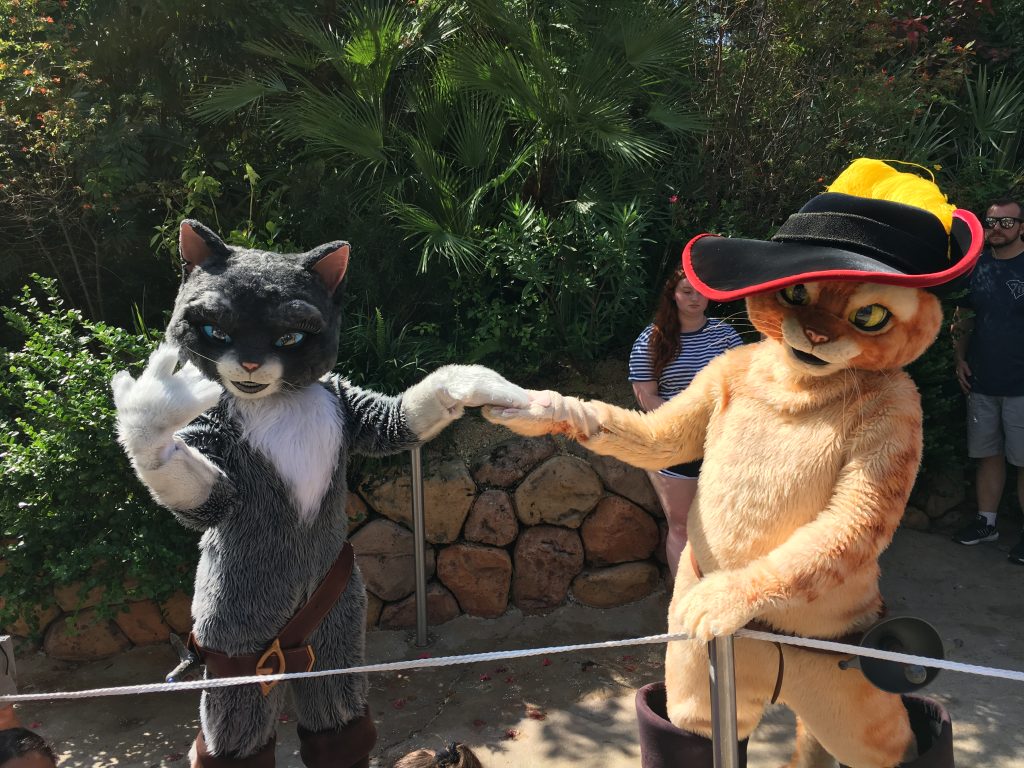 As with all new attractions, there will be long lines and there may be delays in operation while they work to improve the ride’s reliability. If you’re only visiting Islands of Adventure for one day, I might suggest enjoying the rest of the park, and trying out the Hagrid ride next time you visit, after it has worked through its growing pains. But, if you’re here just to ride this amazing new ride, be there early, be ready to wait, bring an umbrella, and bring your patience.

It is my hope that the tech teams working to get this new coaster working do so as soon as possible. I appreciate all that they are doing, and I know they’re working hard. The ride is immensely impressive and I cannot wait until the day when I can get to the park and know I will be able to ride it without fear of an extended shutdown. Until then, I’ll be packing my patience, (and extra Fuel Rods for my phone,) while I wait in line for my next thrilling adventure to the Forbidden Forest with my favorite half-giant. 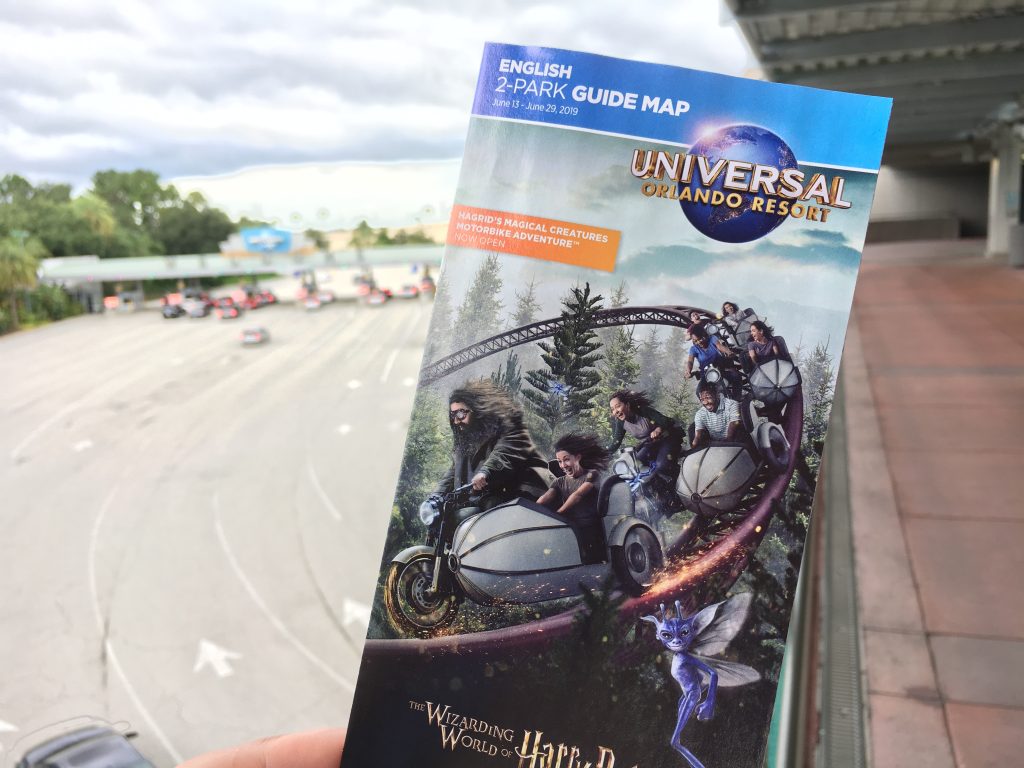 For more information on some of the technical issues with the ride, check out our latest episode of the ParkStop Podcast. And be sure to watch my video all about opening day!

Stay tuned for more news about this new ride as it happens. Subscribe to the news feed or enter your email below to never miss an update. Photos: Alicia Stella