We’ve talked a lot about Universal Orlando’s upcoming theme park, and what kind of rides and lands it’s rumored to contain, but one question I see asked quite a bit, is just how big will this new theme park be?

How will this new park compare to the existing Universal Orlando parks? And will there be room for another park on the new property? Let’s take a look at what else compares to its size, and what the future could hold for the Epic Universe site. Check out the video version of this story below for additional visuals.

Touted as the company’s largest domestic theme park, Universal’s Epic Universe is being built on a section of their 750 newly acquired acres of land. When combined with the current Universal Orlando Resort, this new property will more than DOUBLE the size of their Orlando offerings. 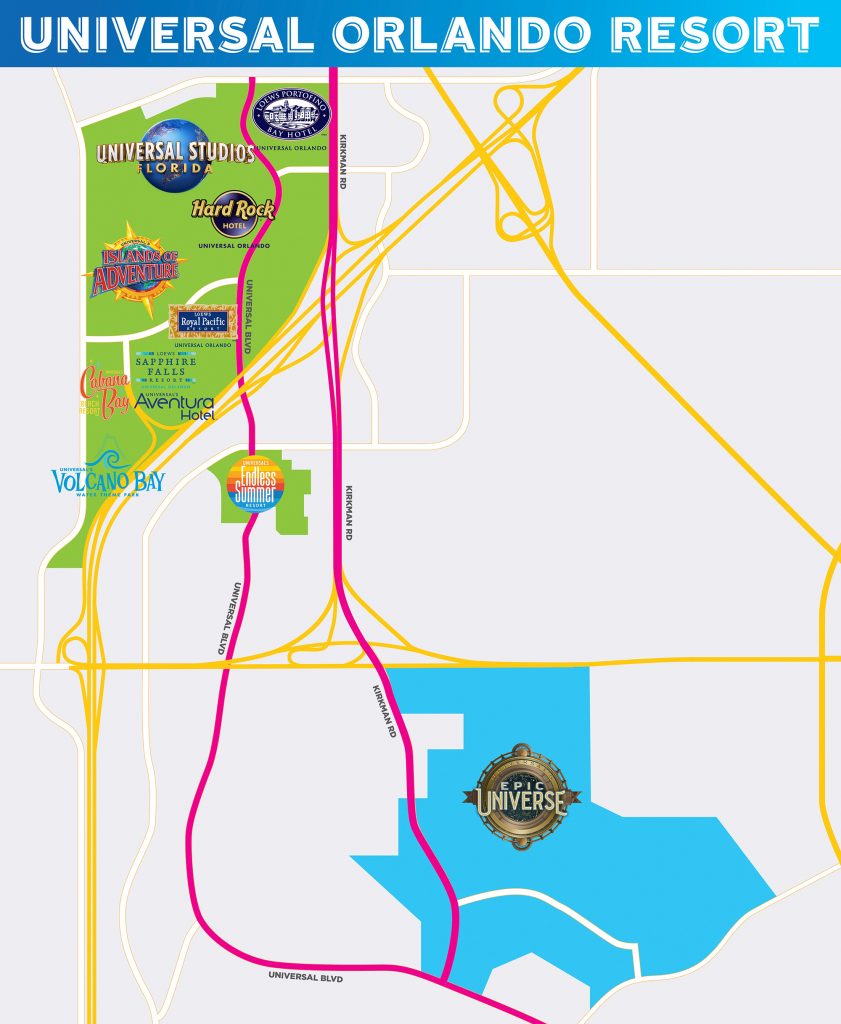 Epic Universe itself will sit on the largest contiguous parcel of land, which is about 480 acres in size, (see image below). The company has also acquired smaller parcels surrounding this area, which is located a couple miles south of the existing theme parks, near the Orange County Convention Center behind I-Drive. 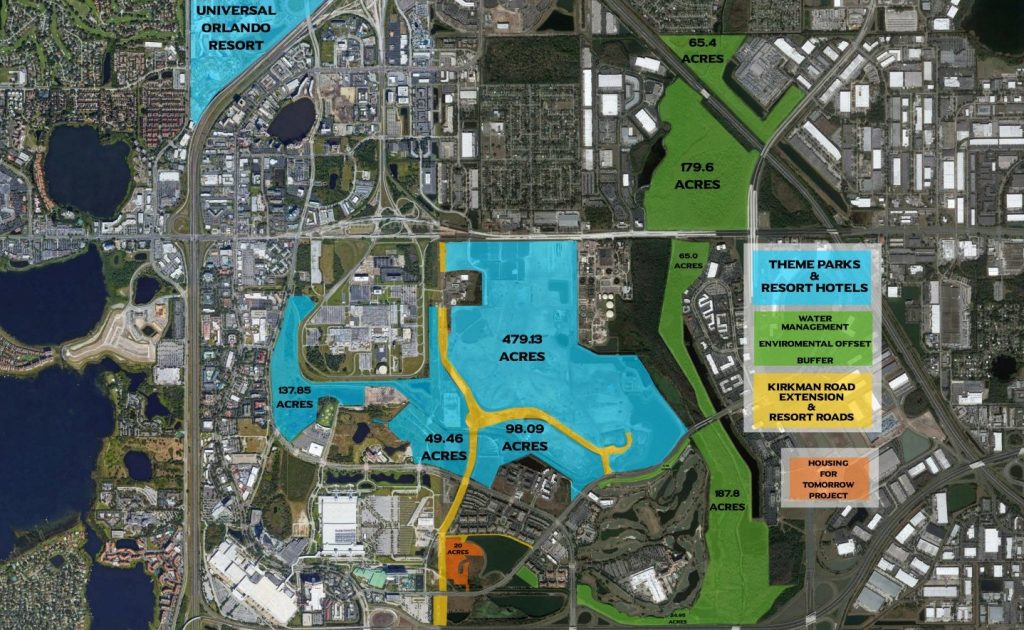 The green areas seen on the image above represent sections of Shingle Creek and protected land that while they do own, the company cannot build on. It will at least help act as a buffer between the new theme park and some of the surrounding areas. The yellow in the image represents land that Universal has given to the county for roads to help serve the new park.

When it comes to Epic Universe itself, just the theme park lands alone are about 110 acres, and that’s not including things like the parking lot, entry plaza, retention ponds, the hotel at the back of the park, and backstage areas. 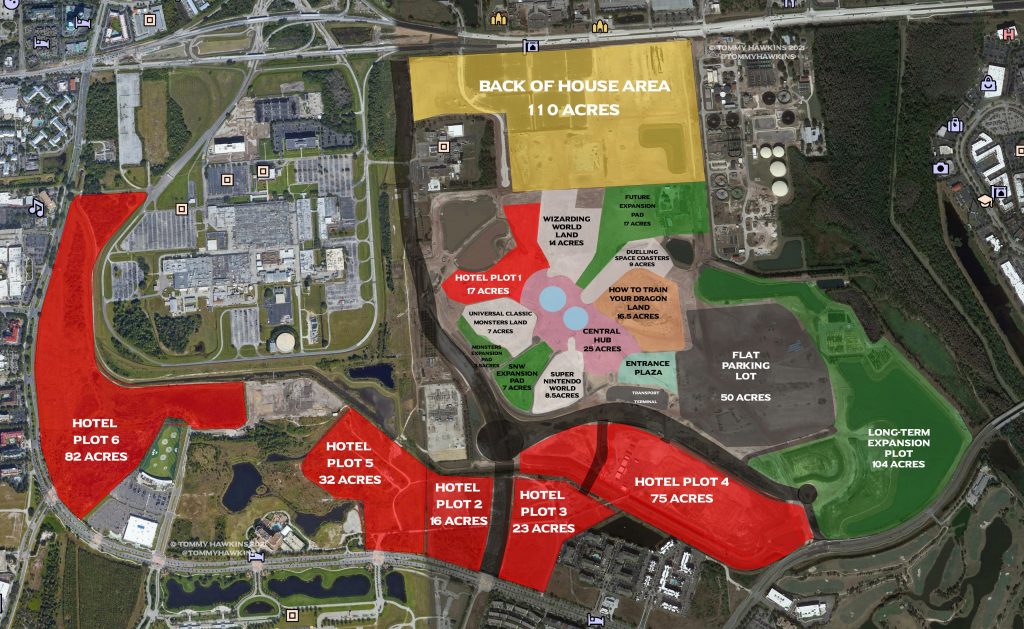 And speaking of backstage, the land set aside for offices, warehouses, team member parking, and more behind Epic Universe will be another 110 acres just by itself. That’s about the size of all of EPCOT’s World Showcase, just for the resort’s backstage!

It is rumored that some administration offices and other structures will be moving from behind Universal Studios Florida to this new backstage area along Sand Lake Rd. If true, that could free up more space for expanding the existing theme parks in the future. 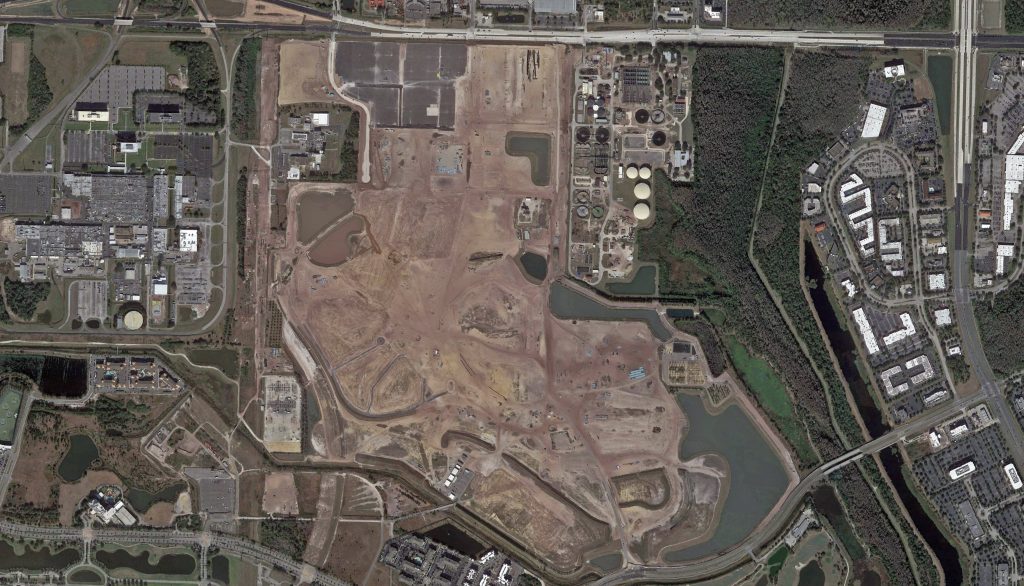 Setting aside the couple hundred acres for more hotels that are sprinkled around the property, and focusing on just that contiguous parcel where the new park will be, let’s see how it compares visually to existing theme parks in Central Florida. It can be hard to wrap your head around just how big something is when all you see is dirt, after all. Thanks to Tommy Hawkins for creating these comparison images. 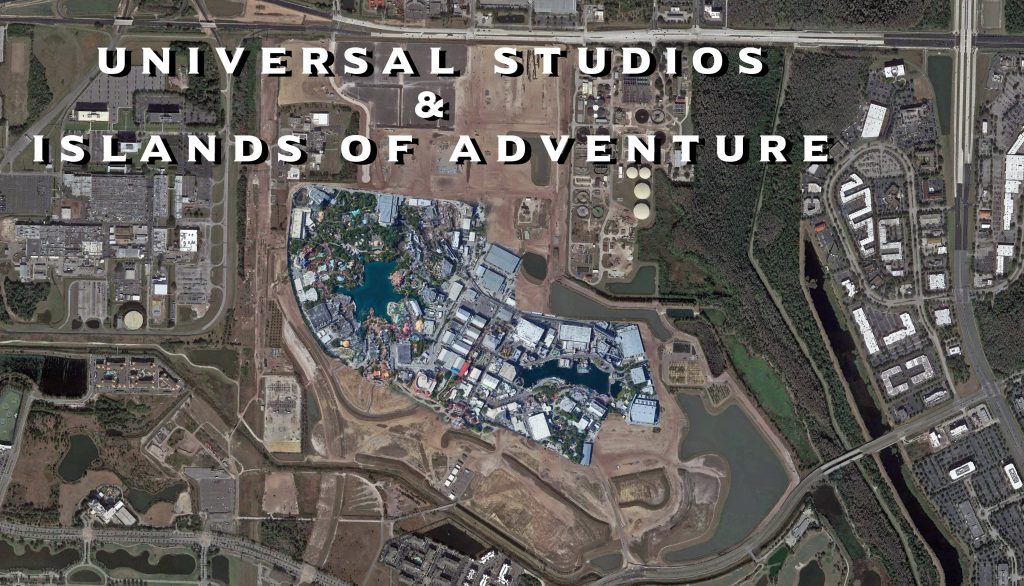 First up, how does this parcel compare to the existing Universal Orlando theme parks? The image above shows both Universal Studios Florida and Islands of Adventure, as well as all the soundstages that sit between them, overlaid onto the piece of land. Keep in mind that this comparison is excluding most of the back of house, because those structures would be kept up above the park’s main area.

What about Walt Disney World parks? The image below shows how Magic Kingdom could look, even oriented the same way as Epic Universe. Instead of Adventureland, just imagine Super Nintendo World in that bottom-left corner of the park.

Here’s how EPCOT squeezes in. 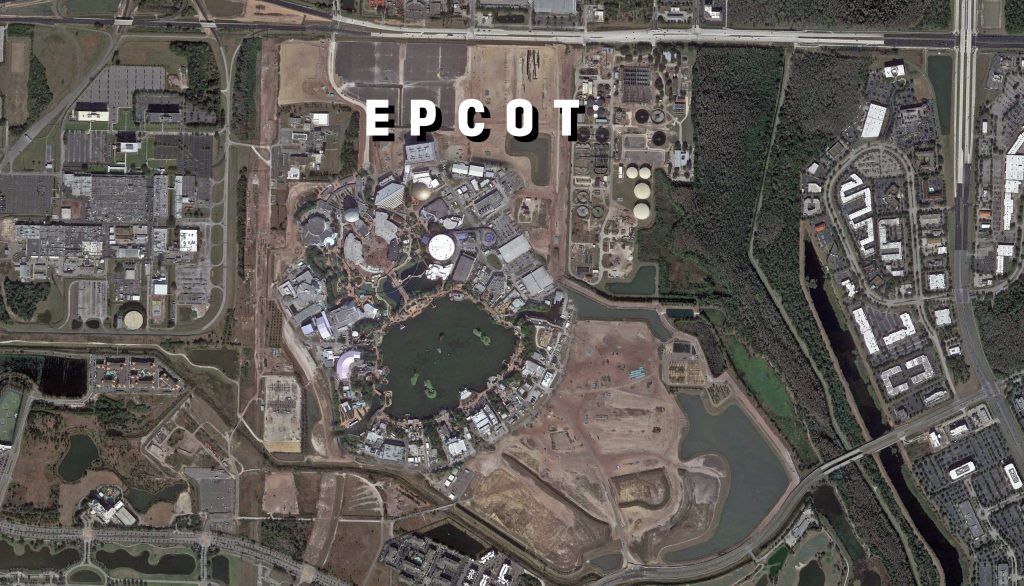 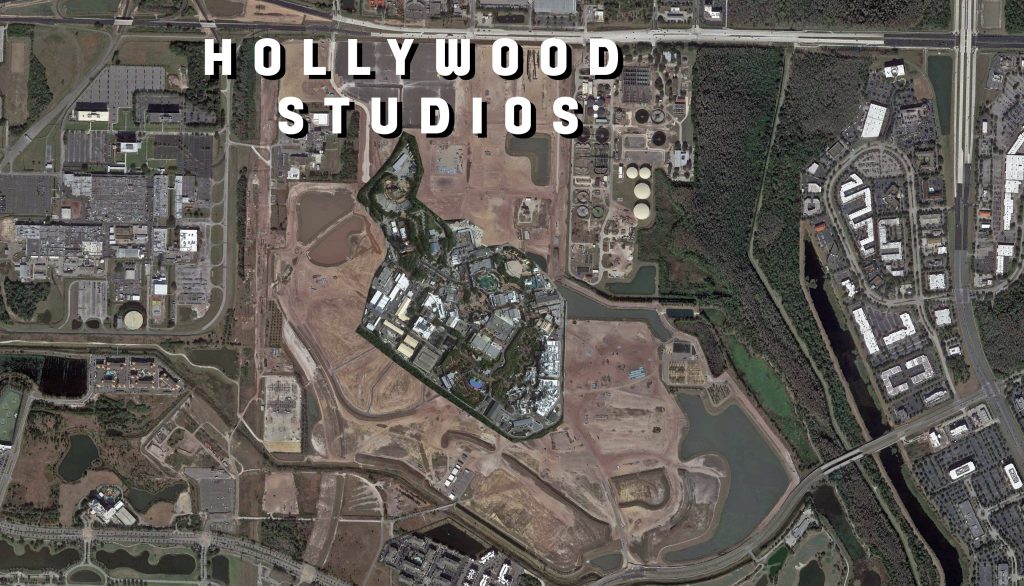 You could even fit Disney World’s largest theme park, Animal Kingdom, including its massive safari area. 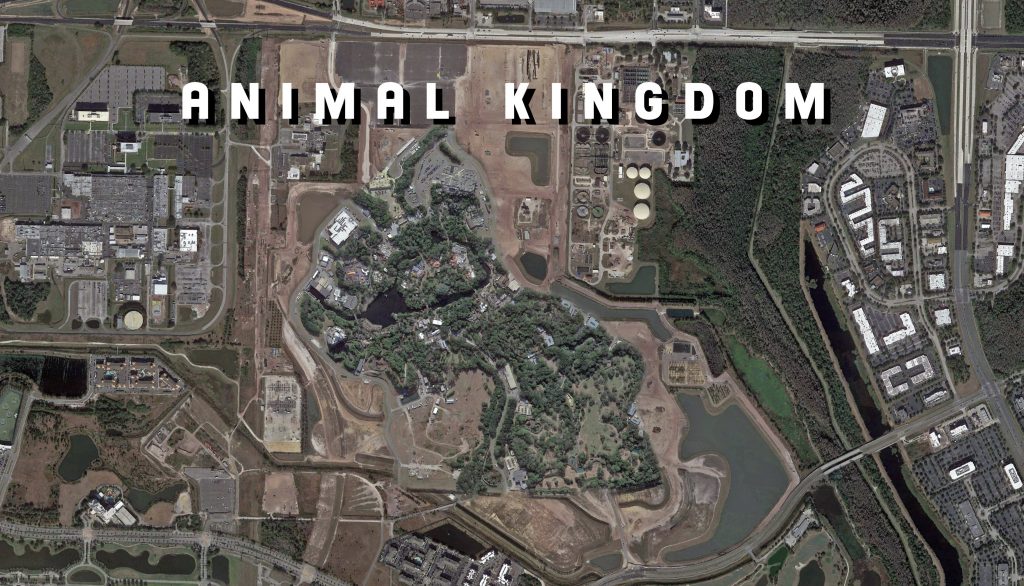 And for all your west-coasters, here’s a look at the Disneyland Resort plopped into the space. 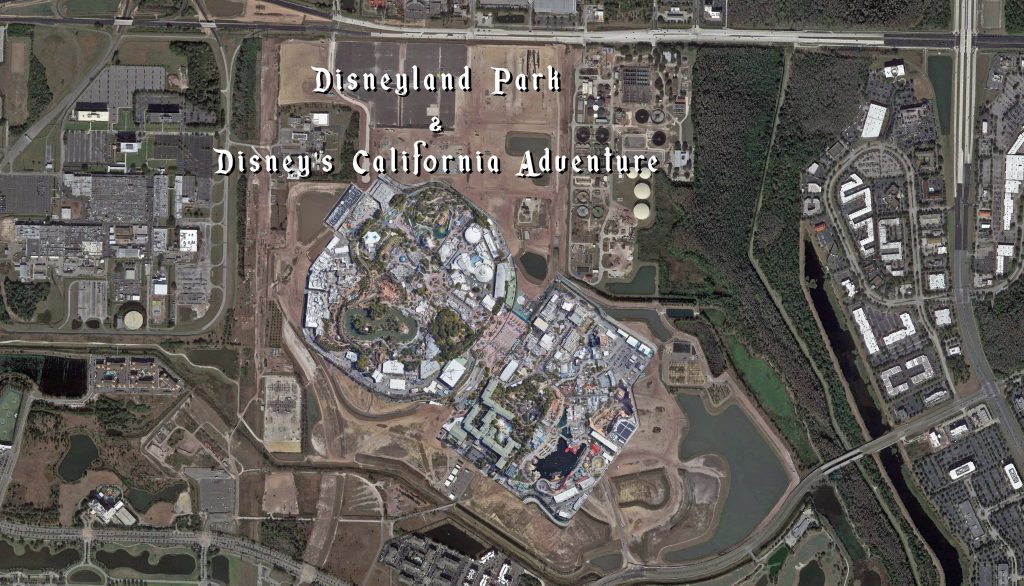 So, does that mean we *can* fit two theme parks here? Sure, if they wanted to. Universal has only announced plans to build the one park for now, but maybe down the road this property could be expanded. Just like they did in the late 1990s at the original Orlando resort, the flat parking lot could be removed to make way for a major expansion.

The image below shows what *could* be added, in addition to all of the areas currently planned for Epic Universe. This includes the possibility of two parking garages the same size as the ones we have at Universal Orlando now, and a second theme park the size of Islands of Adventure. Plus, not only is there enough room for a CityWalk-type entertainment district between these two parks, there’s enough room for TWO CityWalks! 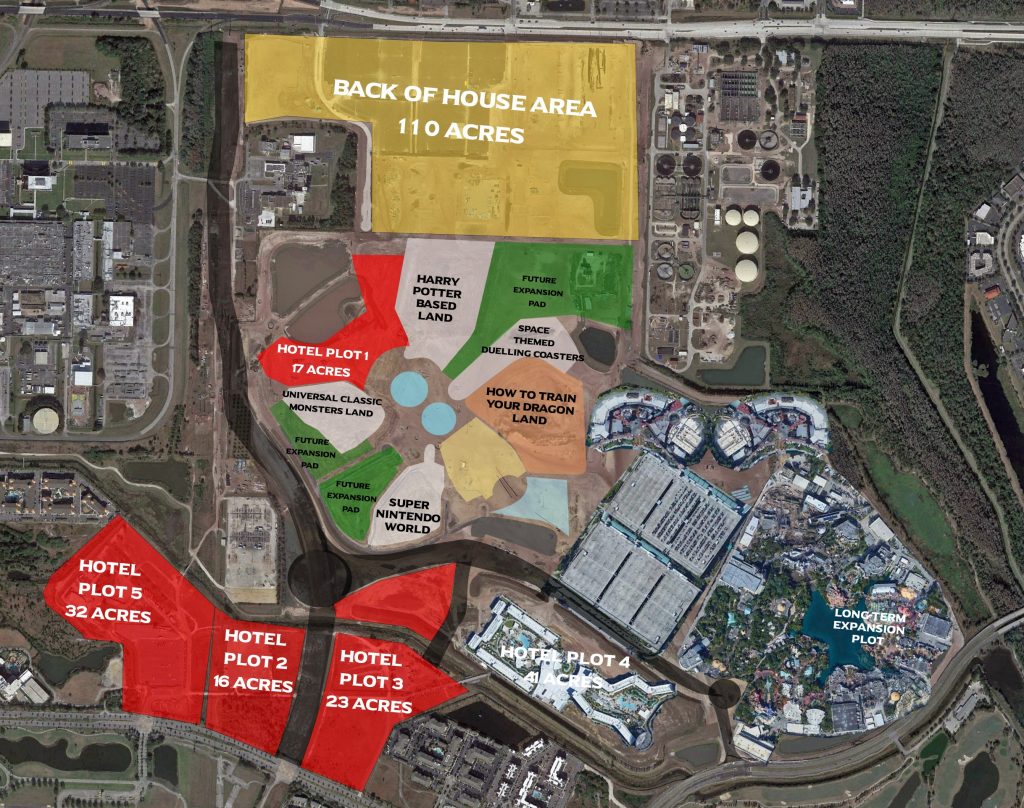 Concept showing how another park, entertainment district, and parking garages could fit on property

Now, existing retention ponds would be lost in this configuration, but those could be incorporated into the design, like as a new lagoon for the second park for example. The concept image above even shows a hotel the size of the original Cabana Bay Beach Resort added to one of the parcels across the street. They really do have enough land to keep building for years to come!

And since we’re talking about size, it’s worth going over how large the individual lands within Epic Universe will be. 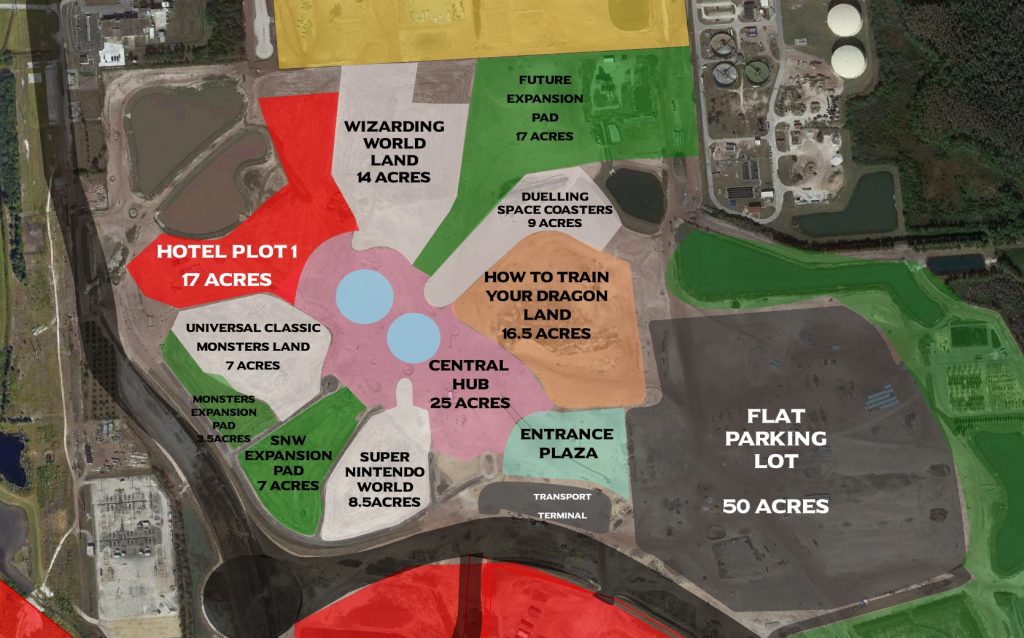 The rumored lands of Epic Universe and their size, Graphic by Tommy Hawkins

So far only Super Nintendo World has been confirmed for the new park, and permits put that land at about 8.5 acres. That’s comparable to something like Pandora – The World of Avatar at Disney’s Animal Kingdom, including its massive show buildings. 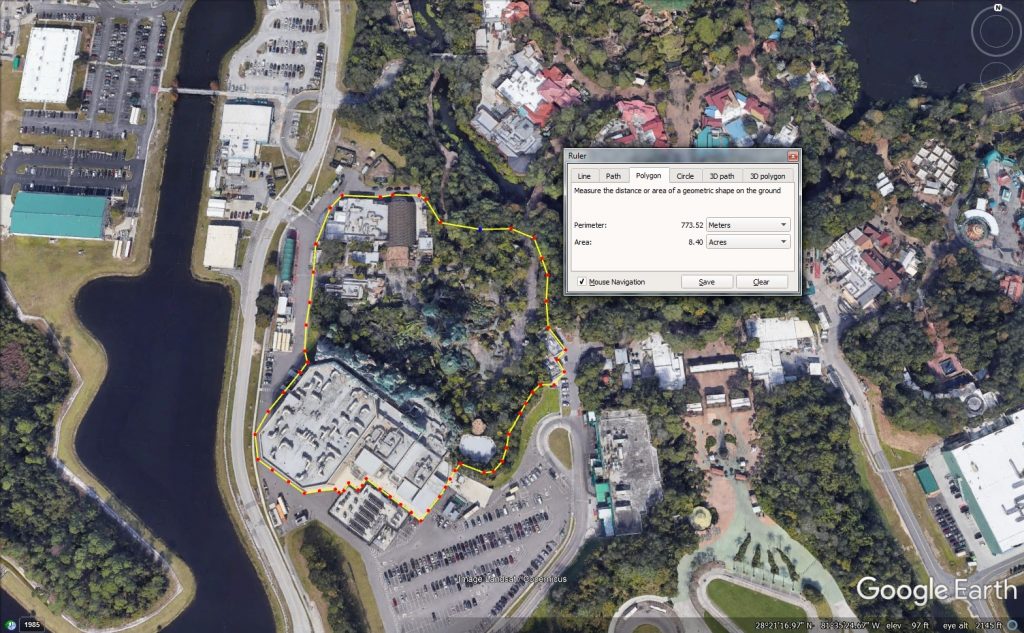 Another comparison might be Diagon Alley at Universal Studios Florida, which is only 7 acres, including the train station and London waterfront. The expansion plot next door to Super Nintendo World is also about 7 acres, so that gives you an idea of what could be built there. 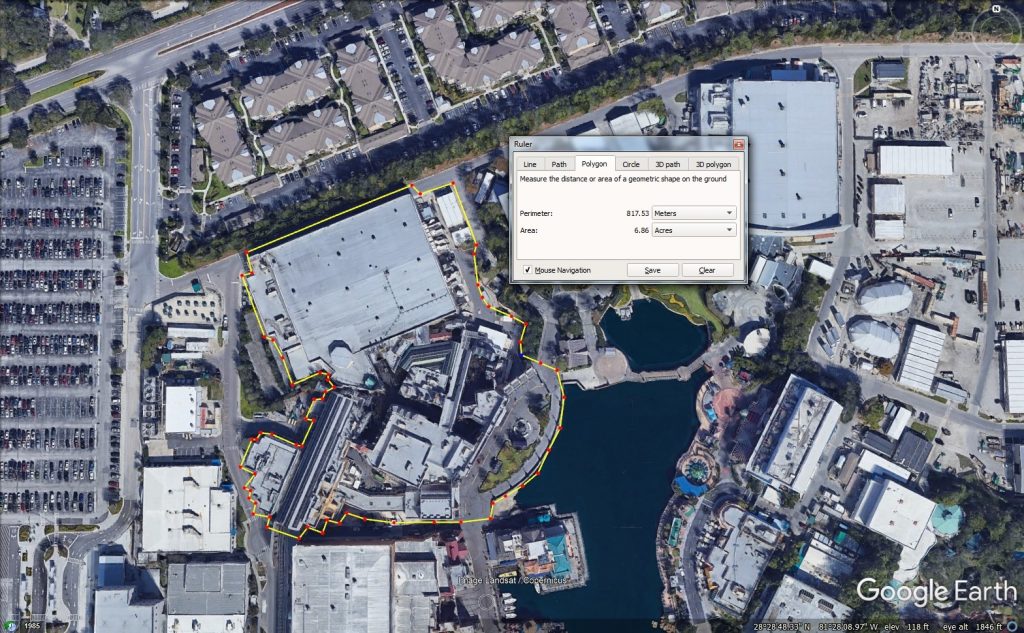 Continuing clockwise around the park, next is a land rumored to be based on Universal Classic Monsters. If rumors are true, this could be themed as the village from Frankenstein. The main area of this land is also 7 acres, but when the expansion pad for that additional ride is utilized, the entire Monsters land will be closer to 10.5 acres.

On the other side of the park, what is rumored to be a new Wizarding World land has been allocated 14 acres. That’s the same amount of space as all of Hogsmeade at Islands of Adventure, including Hagrid’s Magical Creatures Motorbike Adventure and the train station. 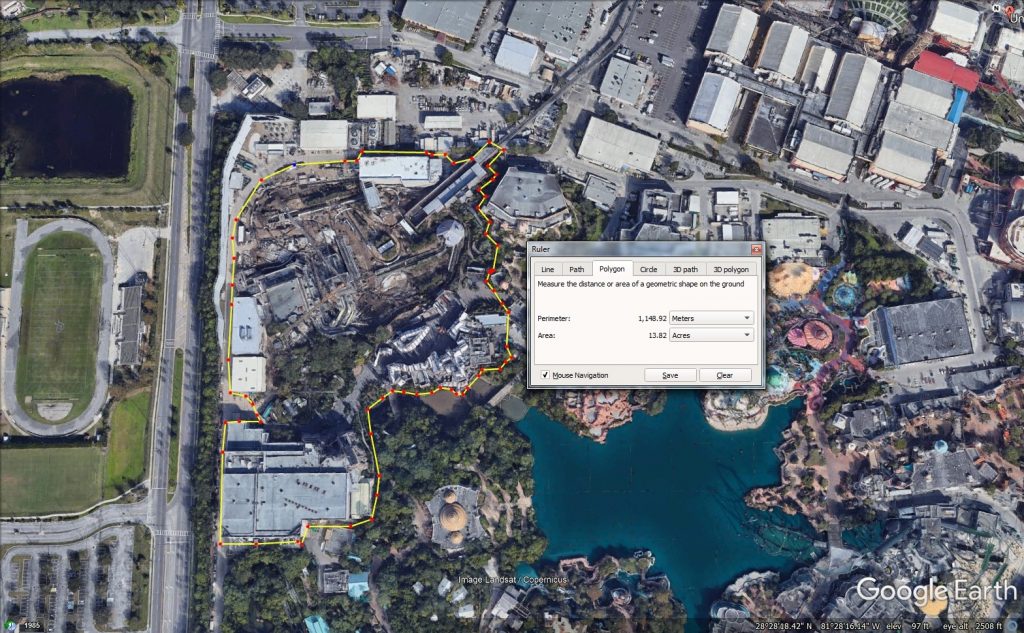 The land we think will be based on DreamWorks’ How to Train Your Dragon will be over 16 acres, which is bigger than Star Wars: Galaxy’s Edge at Disney’s Hollywood Studios. There’s also enough expansion space on this side of the park for another land that’s even bigger. 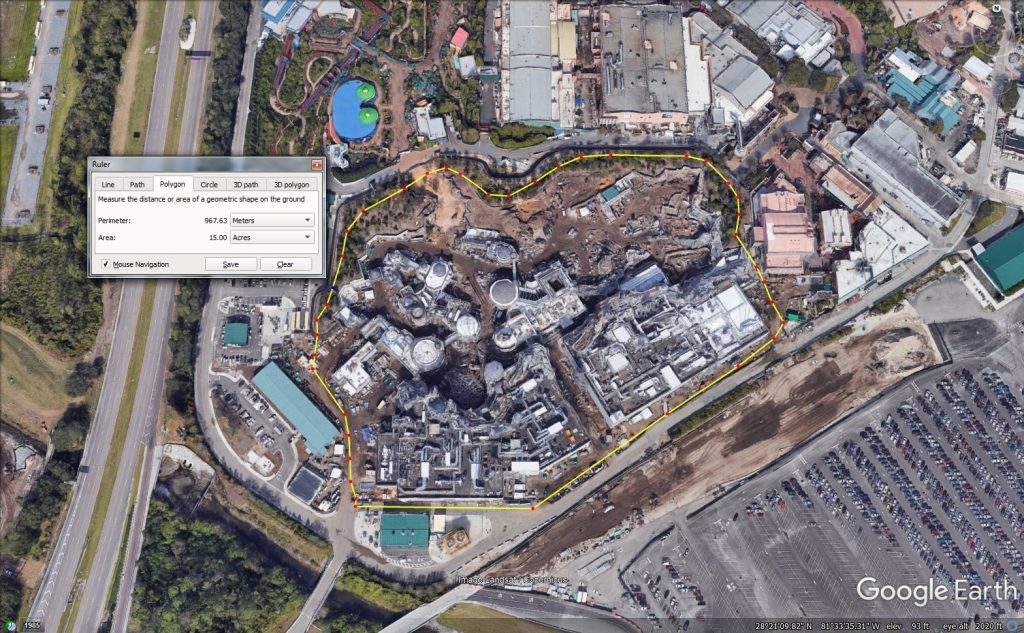 And in the center of the park sits its massive hub. Pulling double duty as both a hub and spoke design for navigating between lands AND a sort of Main Street, U.S.A. with shops and dining, this area is about 25 acres itself. That’s nearly DOUBLE the size of Magic Kingdom’s entire hub and Main Street combined. 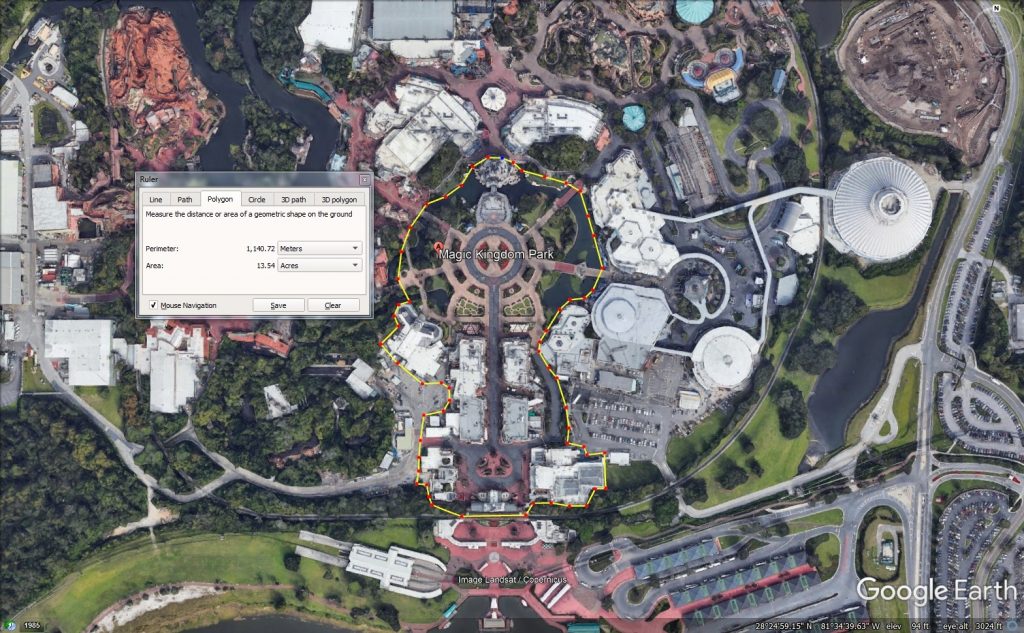 This hub area is the same size as all of Volcano Bay! That is one big hub. 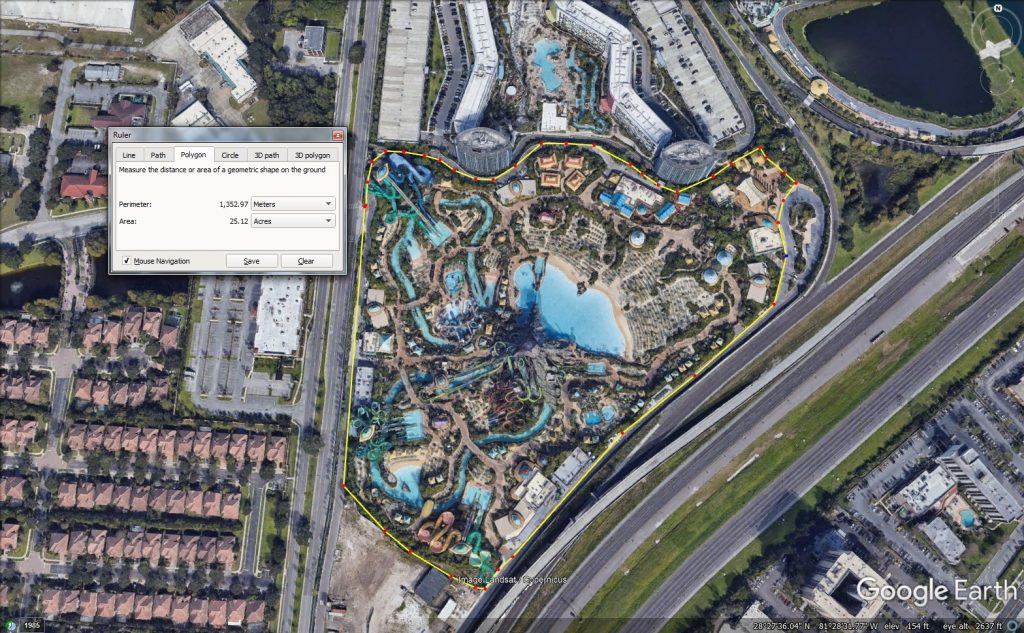 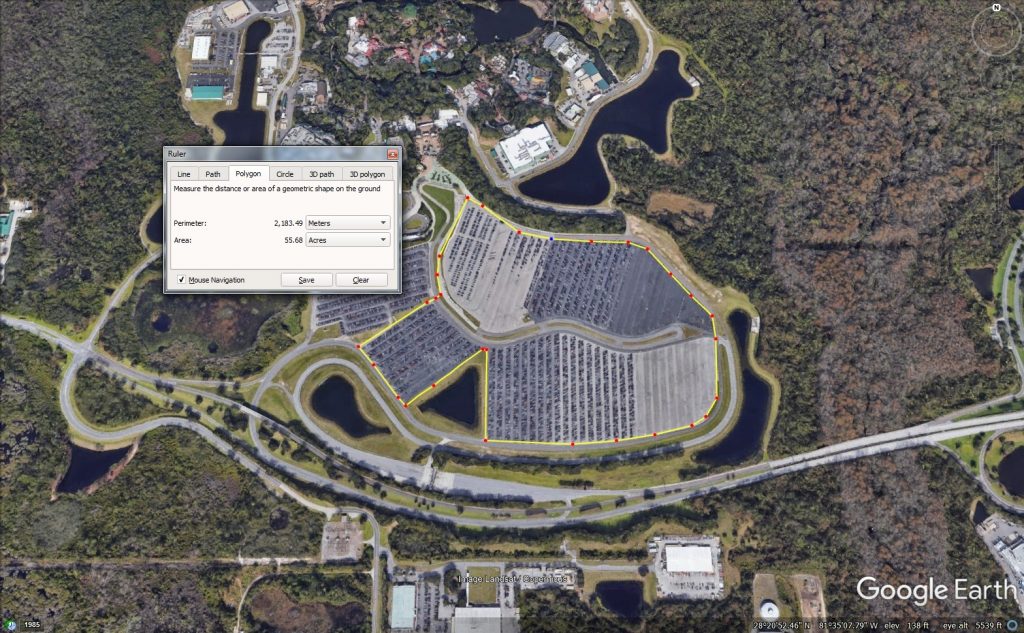 At the end of the day, Epic Universe the theme park will be comparable to the two existing theme parks, (although with more space for structures without a central lagoon,) but the land that it sits on is big enough to expand Universal’s empire in Orlando to double its current size. And to me, that makes the future pretty exciting. 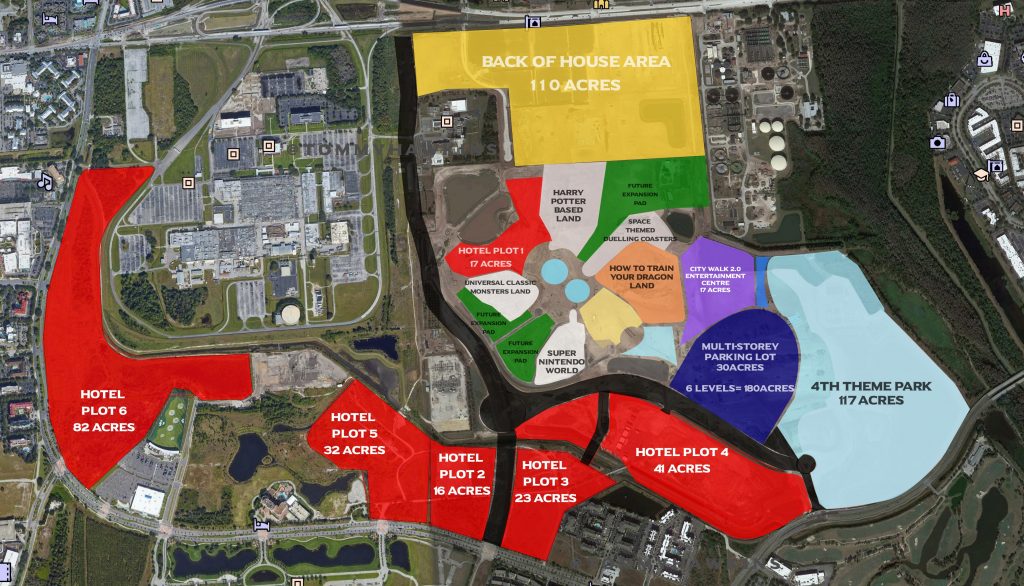 That’s all for now, but check out the video version of this story for additional visuals, and be sure to share it with a friend! And special thanks to Tommy Hawkins for creating many of the amazing graphics seen in this piece. Follow his Twitter for more!

To learn more about what types of rides and attractions we could see at Epic Universe, including permits for all of the lands it’s expected to contain, see our Everything We Know piece.

Subscribe to the news feed, or enter your email below to never miss an update, as we will continue to share news and updates on the new park as it is built.