What appears to be new official concept art for Japan’s Super Nintendo World has surfaced online. Originally appearing on the Xtrend Nikkei website, this piece of art depicts the new land with more realistic detail than we had seen previously from officially released artwork.

The image appears in a story about how the new land will be opening in 2020 at Universal Studios Japan. In the art we’re finally getting our first official look at how the Yoshi ride vehicles will appear, along with a ton of other small details that were omitted from the commercials and concept art we’ve previously seen. Check out the art and analysis of the details below, and stay tuned for more coverage of Super Nintendo World as it happens!

UPDATED 11/21: Newer, higher resolution official concept art has been shared by the company. It has better color and contrast levels, in addition to being higher quality. Seen below. 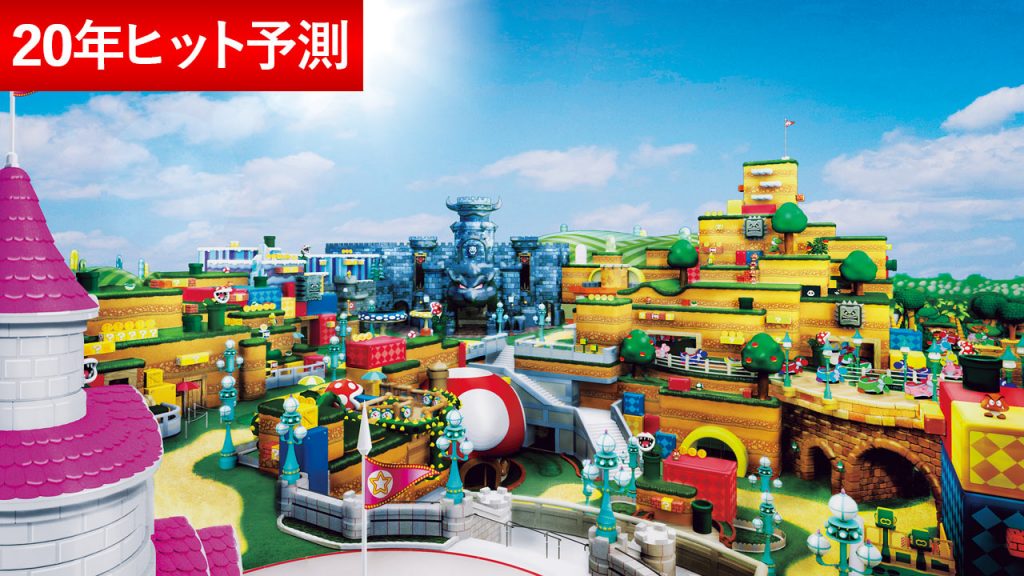 The image (above) does match previously found leaked photographs of the model for Super Nintendo World (below). In fact, the only thing that really appears to be missing from this new piece of concept art are the signs above the entrances to the rides and the restaurant.

However, there are additional details in this piece of concept art that weren’t very apparent in the model, namely the green hills in the background. These 2D hilly landscapes look to be blocking the view of the Mario Kart show building on one side, and the view of the real world on the left side of the land.

The art shows off what the actual ride vehicles for Yoshi’s Adventure will look like, the land’s family omnimover ride. We have spoken about this ride in an article and video a few months back, and it is good to see them presented here, once again in a multitude of colors. Photographs of construction in Japan have given us great views of this area, and it’s starting to match the concept art exactly! 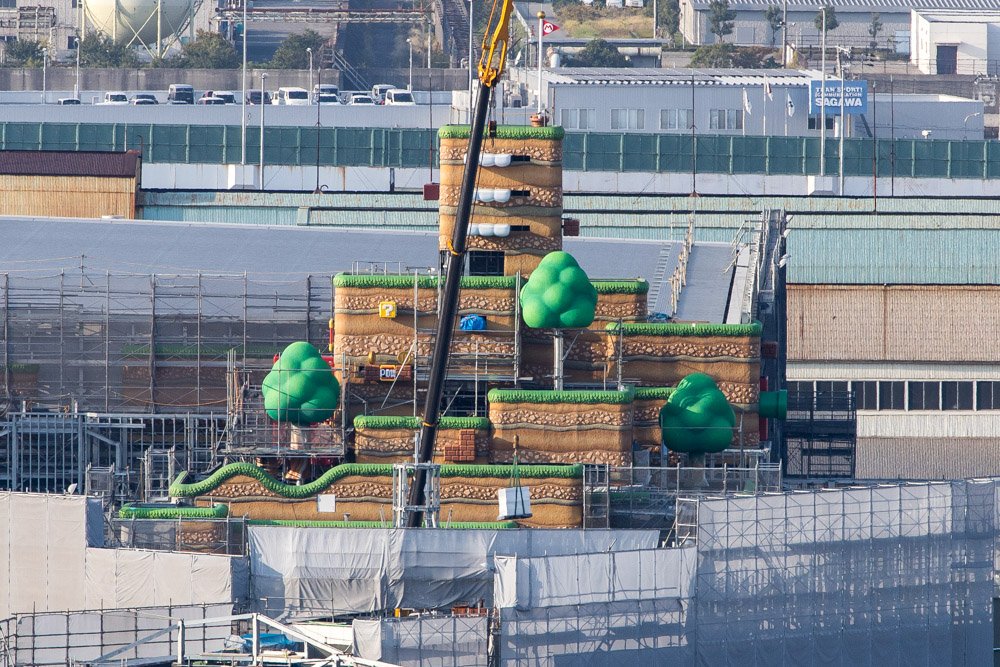 View of construction in Japan (Photo by @bbbuilding100)

We can see the Bowser’s Castle facade for the entrance to Mario Kart in the new art, naturally, in addition to the Toad’s Cafe on the lower level. And, for the first time in an official piece of art, we can see the long-rumored augmented reality binoculars that will be located around the land. These AR viewers, rumored to have been developed by Valtech, will allow you to see the land with additional characters and elements laid on top of reality! That’s just one small part of the multitude of interactive and game features we can expect for the land.

Check out the new concept art image below along with labels I have added to help point out some of the interesting aspects we may encounter around the land. 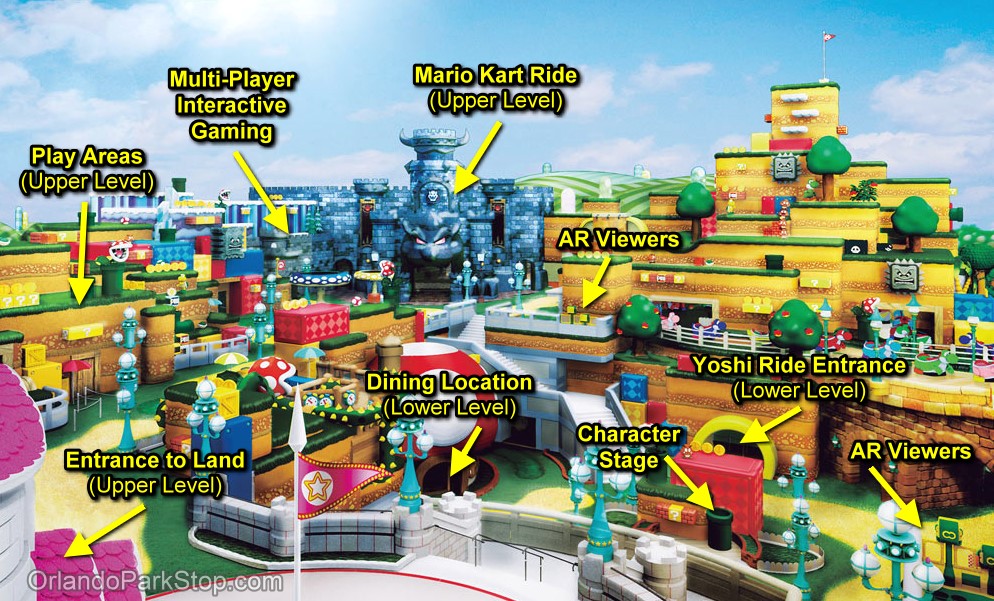 It’s exciting to finally be getting something new to look at as we inch closer and closer to next year’s official opening. While an opening date has not yet been revealed, Tom Williams, Chairman and CEO of Universal Parks & Resorts, said recently that the land should be open in the Spring of 2020. This would put it ahead of Tokyo’s Summer Olympics, which was a deadline the company had set out for themselves to open by. Even if the land doesn’t open until the summer, it’s crazy to think that we’re only about half a year away from being able to enter the world of Nintendo, and ride with Mario on the Mario Kart ride! 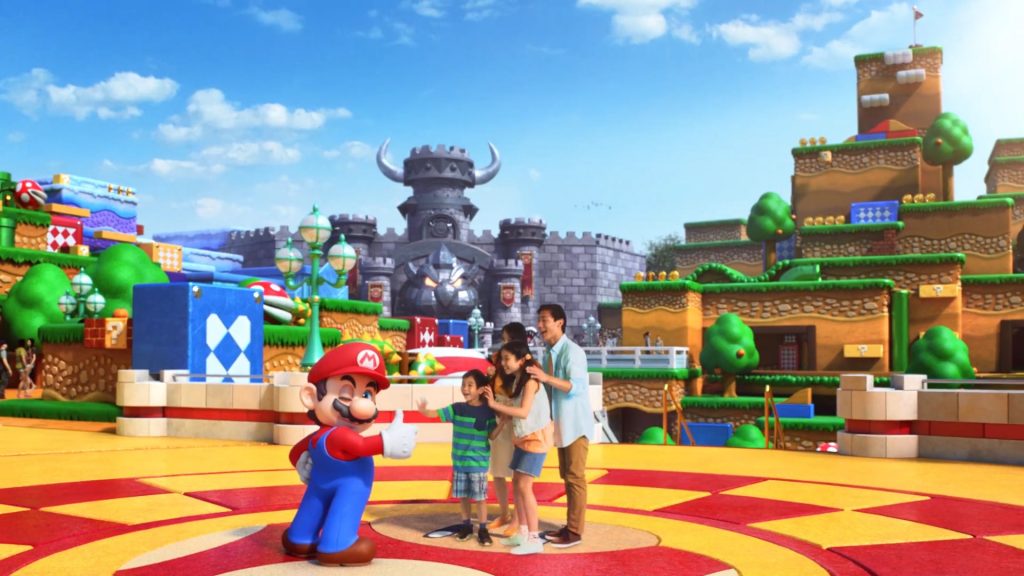 The early teaser commercial includes some of the land’s details

Stay tuned for more news on Super Nintendo World and more! Subscribe to the news feed or enter your email below to never miss an update. Main concept art: Xtrend Nikkei | Other Official Concept Art: Universal & Nintendo | Graphics by Alicia Stella | Other images as credited