Shrek 4-D is now closed at Universal Studios Florida, and is already surrounded by work walls in preparation for a new attraction. Given the decoration along the walls, it’s looking like Shrek’s replacement will in fact be another Minions attraction, as has been rumored for years.

Let’s check out the work walls around the newly closed show, and dig into rumors for what will replace it in today’s news update. 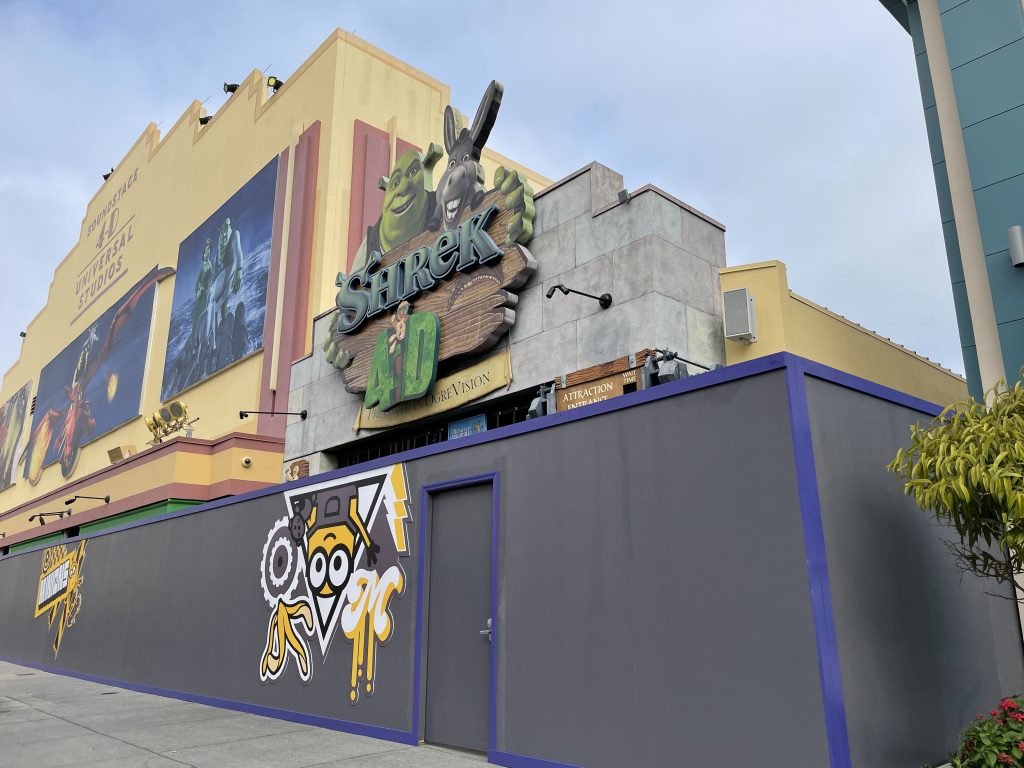 Universal had been hinting at something on social media, posting photos of half-eaten bananas strewn about the park in the days leading up to Shrek 4-D’s closure. Bananas just so happen to be the Minion’s favorite food. Today they posted a video showing the removal of an onion, a reference to Shrek (since ogres have layers like an onion,) and the arrival of a banana. 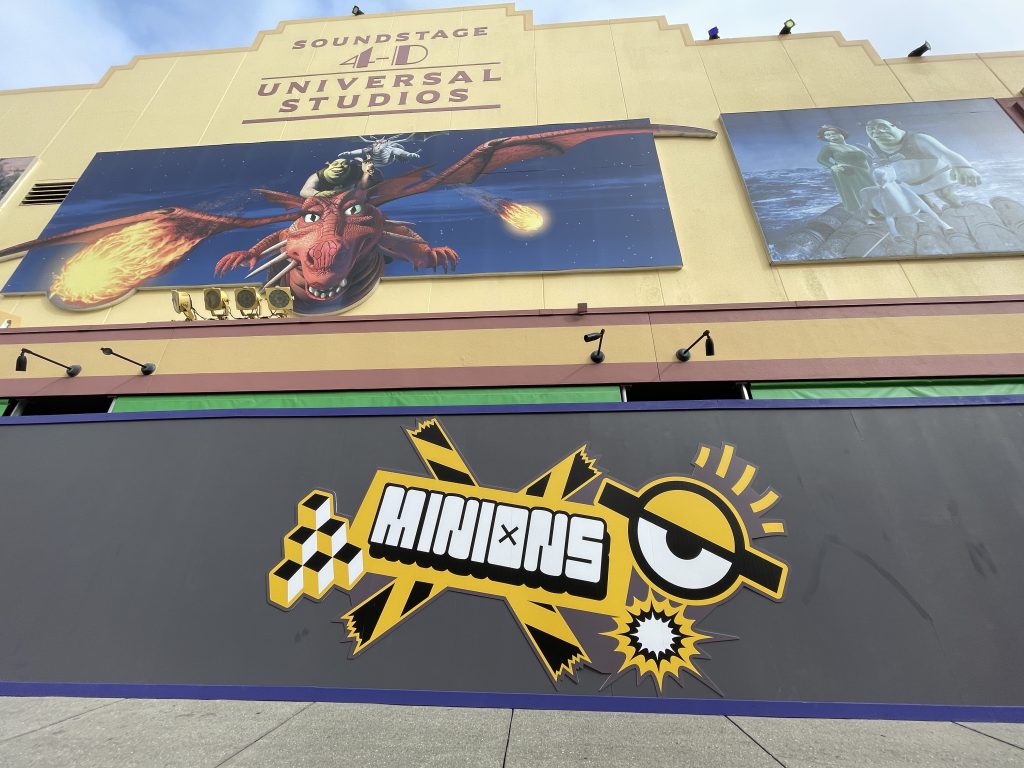 The former Shrek 4-D attraction is now surrounded by work walls featuring Minions-related graphics. For four years now, one of the leading rumors for a Shrek replacement has been for a new interactive attraction featuring the Minions. This experience was rumored to take place at the Villain-Con location from the first Minions movie.

Rumored to have originally been designed as a trackless ride, and then changed to a walk-through, current rumors have this attraction as something a little different. In all variations of the rumor, guests would be able to try out out different gadgets and zappers in interactive displays around the convention floor.

The current rumor is that instead of walking from booth to booth to try your hand at firing interactive zappers, guests would instead be moved from one interactive shooting gallery to the next on large moving walkways.

These walkways would take us to the next booth, so we can play the game in front of us, and then move us on to the next one. And everyone would likely be moving at the same time. Supposedly, the technology for these moving walkways can even allow for turning corners. 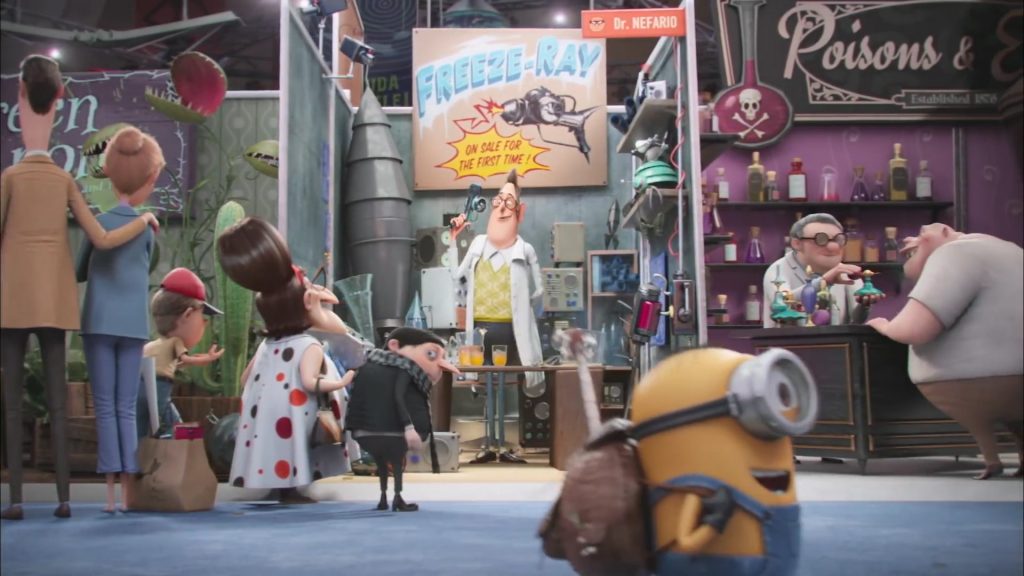 It could be like Toy Story Mania at Disney Parks, but instead of being seated on a ride vehicle that takes you from game to game, you would stand in place while the floor moves you to where you need to be. None of these details have been confirmed by Universal though.

Permits we believe to be related to this project were recently filed with Orange County. They describe interior demolition of some of the existing partitions and portions of the existing slab, among other details. 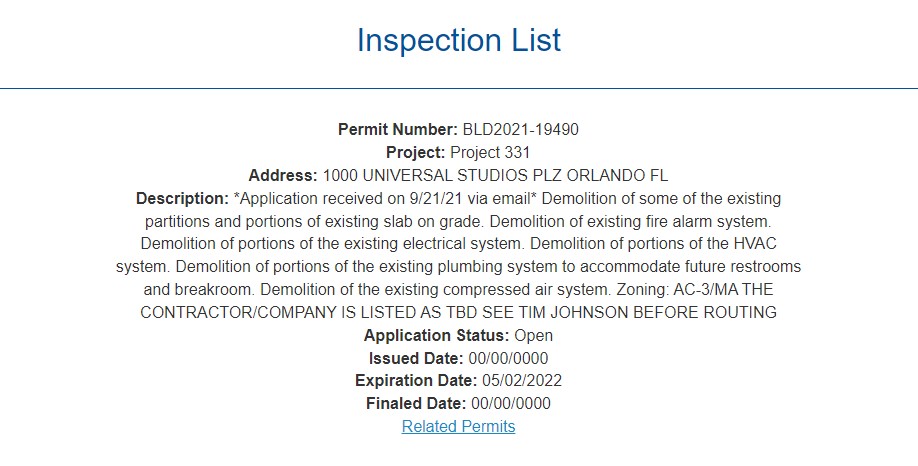 The permit also lists “Demolition of the existing compressed air system.” as part of the work included. That could be related to the pneumatic air system that was used to add motion to the theater seats, as well as create special effects, for the Shrek 4-D show. 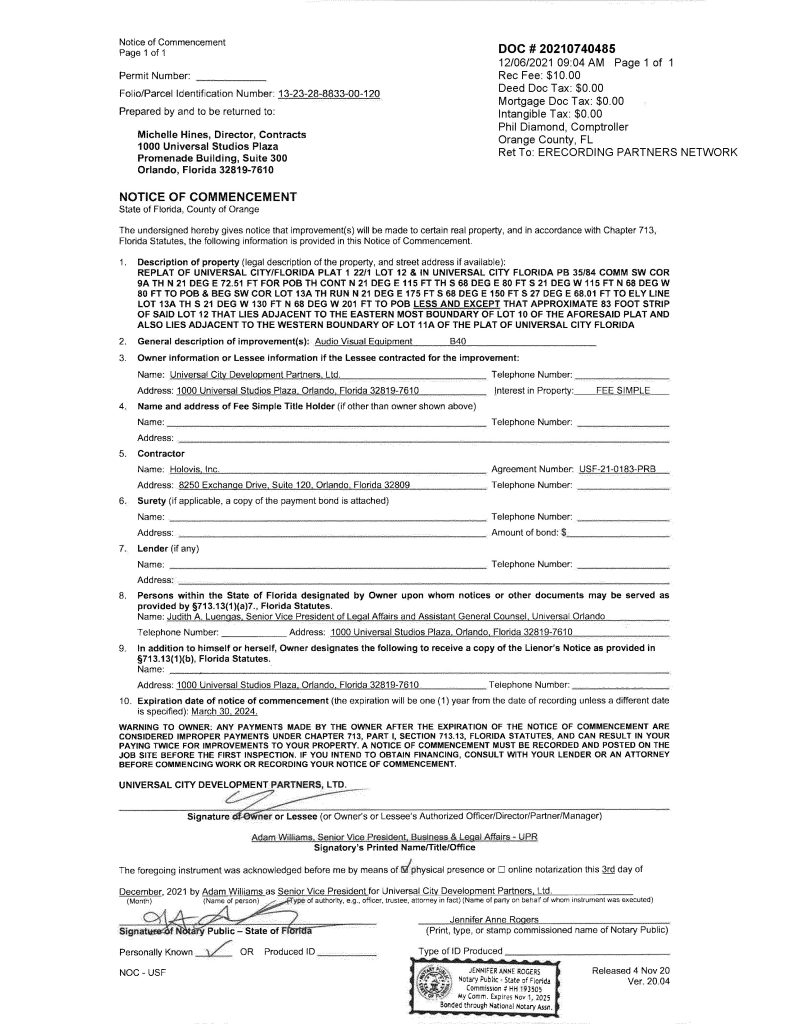 A notice of commencement was filed with the Orange County Comptroller’s office recently too. This notice described Audio and Visual Equipment for Building 40 at Universal Studios Florida, which is where Shrek 4-D was located.

The contractor listed on the document is Holovis, Inc.. They specialize in interactive and immersive screen media, which is line with rumors for the new attraction. 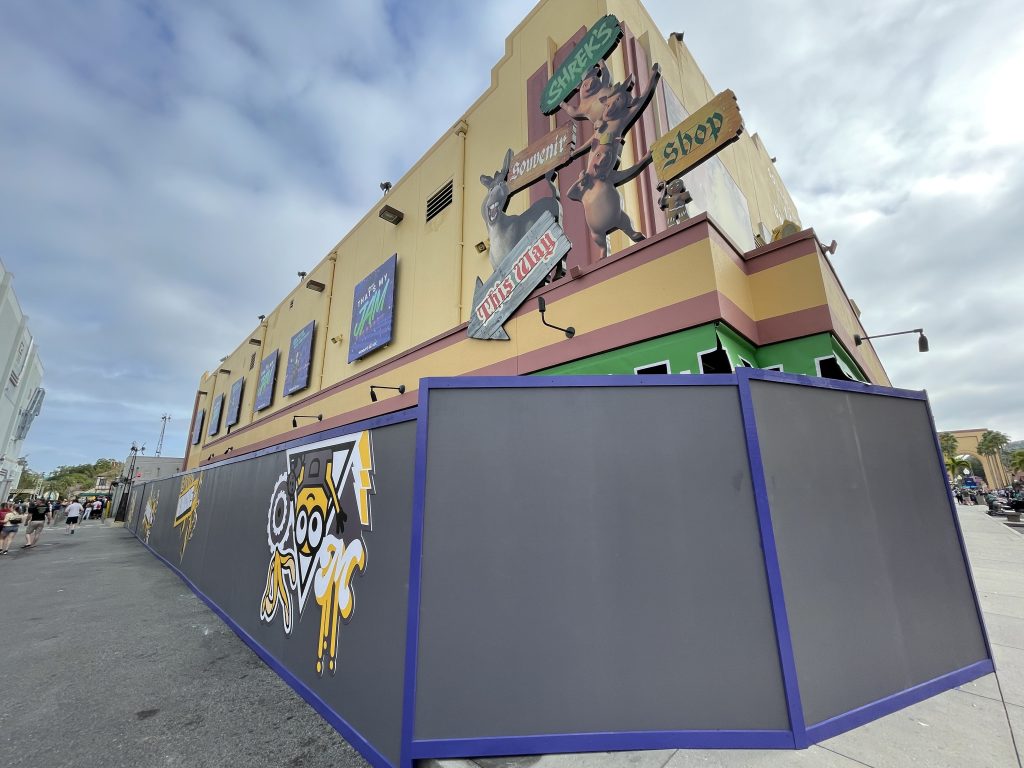 While rumors originally had this new attraction opening in time for the release of the second Minions film this summer, a new rumor suggests this Minions Villain-Con standing ride will instead be opening in 2023. Again, Universal has not yet announced any official details, including an opening date, at this time. 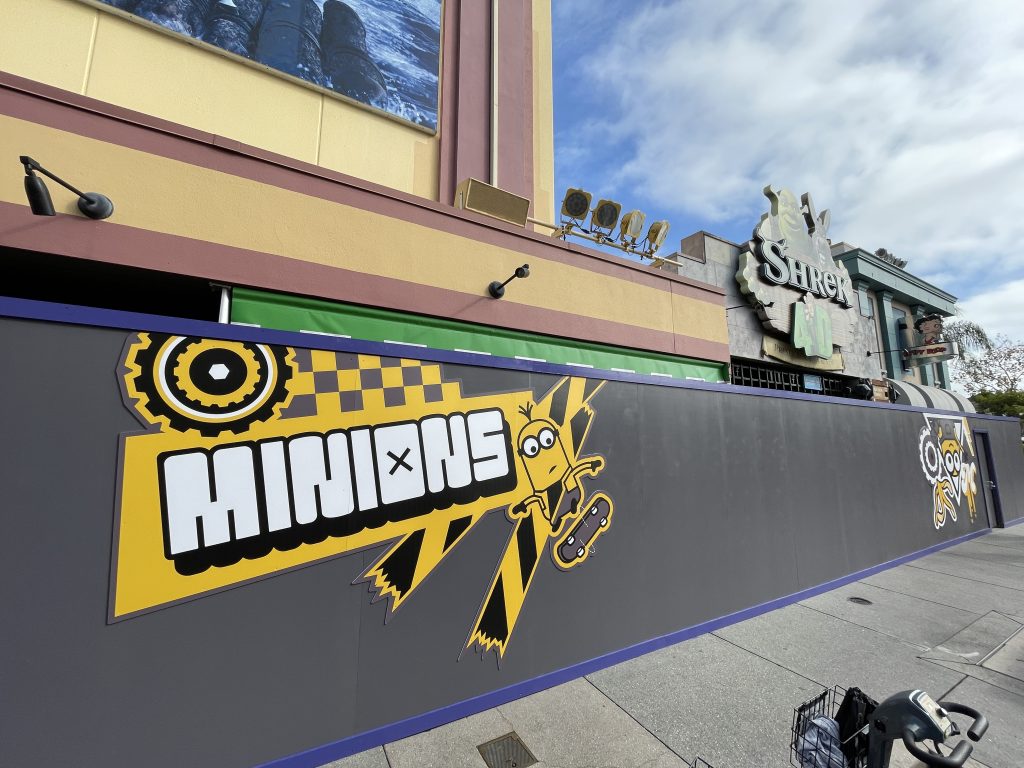 Permits have also been filed for demolition of the Fear Factor Live theater in the same park, so we may see movement on that project within the next few weeks as well. That attraction is rumored to be replaced with an expansion for The Wizarding World of Harry Potter – Diagon Alley. The leading theory for that has been a virtual reality experience where you get to fly on a broomstick, but no details are known at this time. 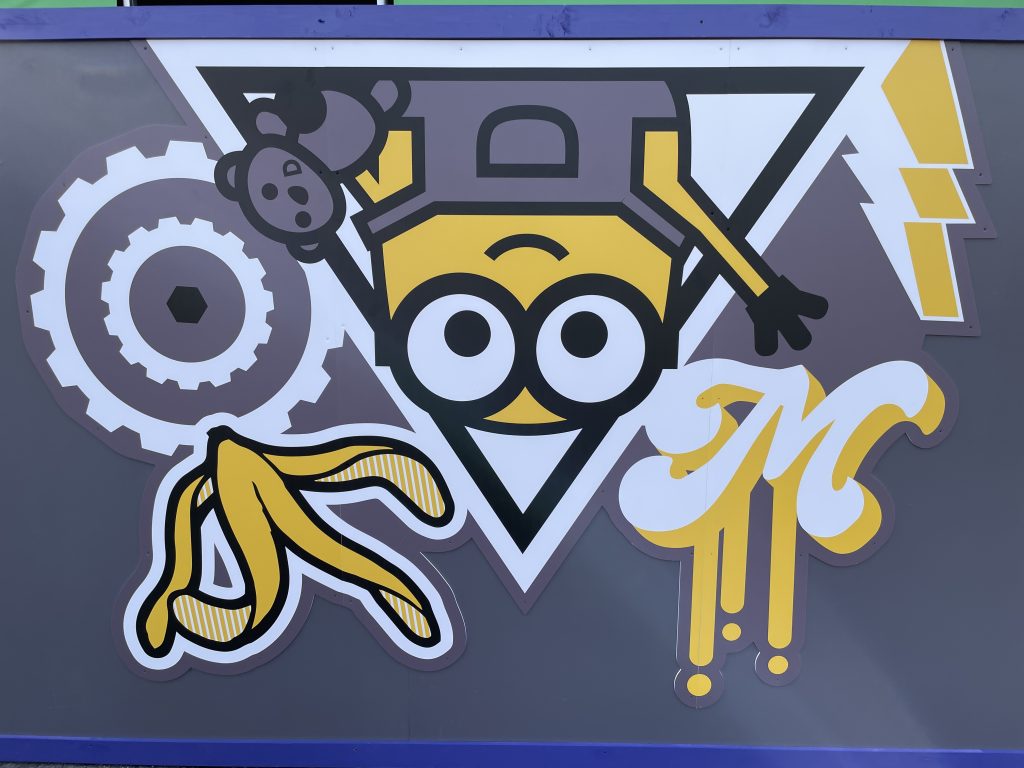 Stay tuned for more information on these new projects at Universal Studios Florida, and check out the video version of this story for additional visuals. Plus, don’t miss our last story all about the extended refurbishment for Revenge of the Mummy, which is going on now. 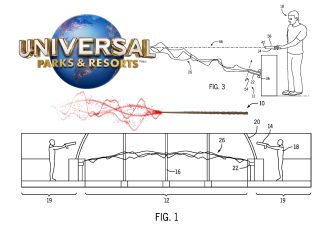