Universal’s Epic Universe is a new theme park being built in Orlando, located a couple miles south of the current Universal Orlando Resort. It’s expected to be made up of four themed lands, as well as a large central hub which will contain attractions of its own.

One of the new park’s themed lands will be based on the DreamWorks’ How to Train Your Dragon film series. Thanks to some recently filed permits we’re learning more about the World of Dragons land at Epic Universe, including some of the layouts for the new land’s proposed attractions.

The site plan images below, which were obtained by Orlando ParkStop through a records request, appear to show the proposed layout for the How to Train Your Dragon land at Universal’s Epic Universe. This land will be located in the south-east corner of the park. (For reference, that is similar to where Tomorrowland is located in relation the hub at Magic Kingdom.) 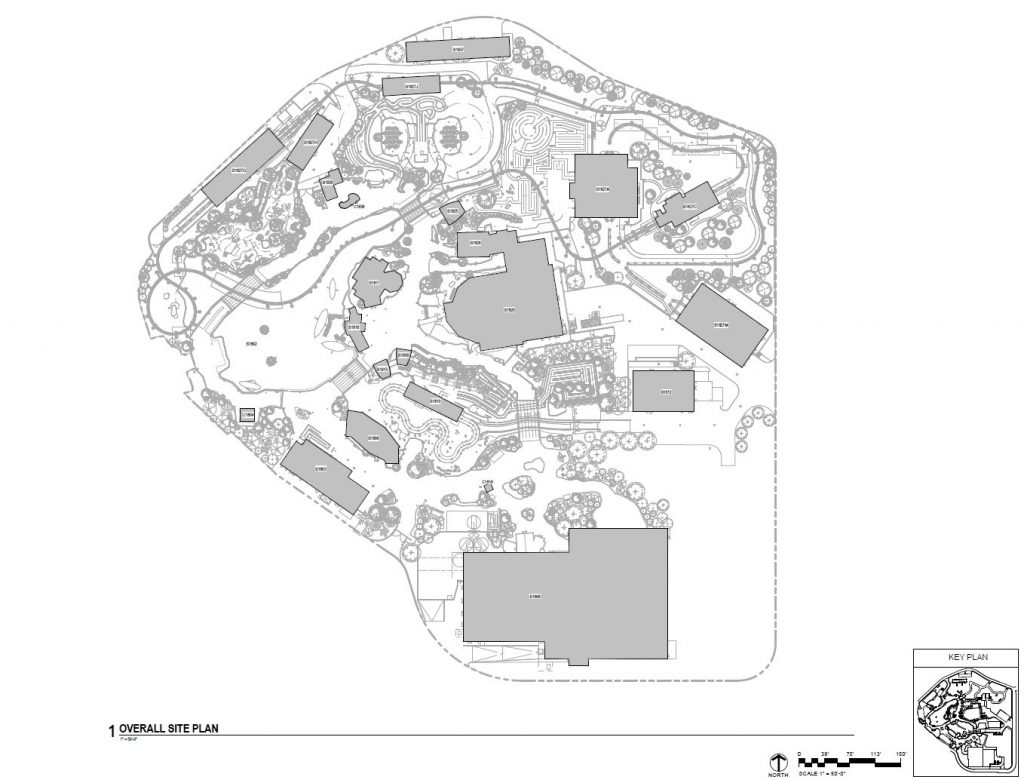 Looking closer at the site plan we see several attractions that stand out, most notably the large roller coaster that encircles a large section at the north side of the area. Two large show buildings for what will likely be indoor attractions can also be spotted in the plans, as well as a boat ride, a flat ride, and an outdoor play area. (You can click on the image below for a higher resolution version.) 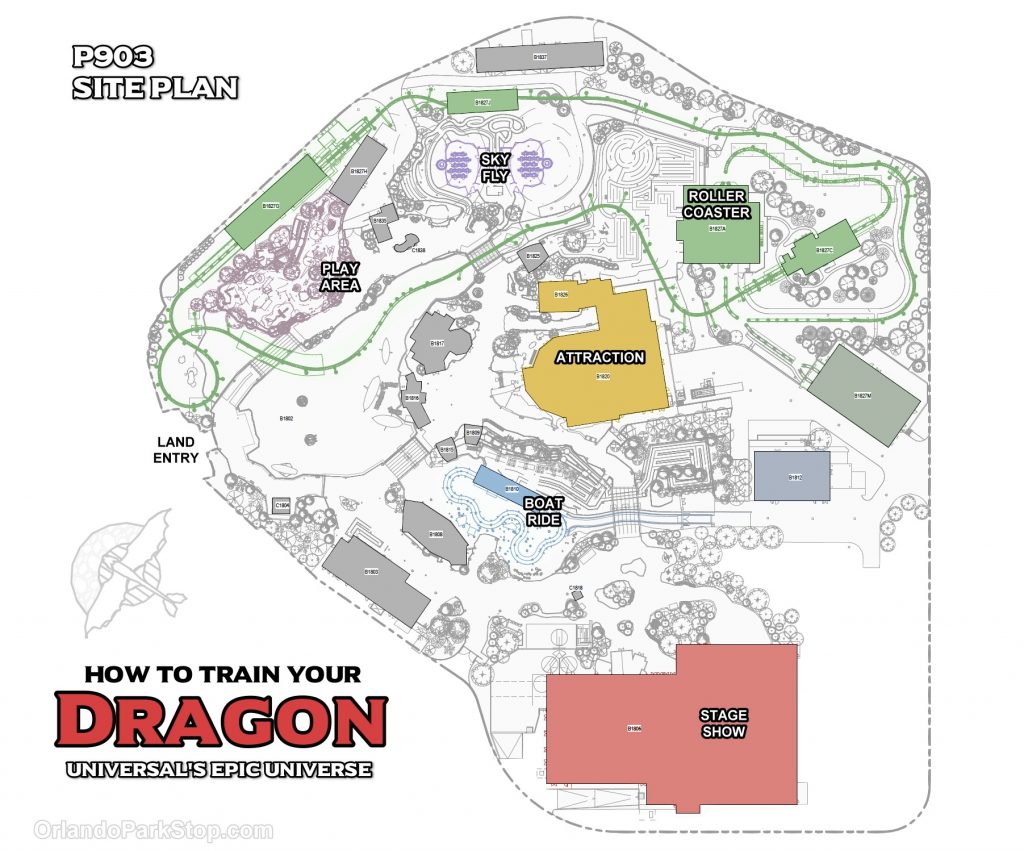 While we do not know yet what type of roller coaster it will be, we can see that this new thrill ride will take guests through some of the land, and pass through three small inside sections. The track appears to split into two tracks directly before and after the load station, which may mean it will have a dual track load/unload area. What looks to be a maintenance building can also be seen, (labeled as B1827M in the site plan). This structure can be seen below the coaster area, and appears to have a track switch that can be used to add or remove trains from the ride. 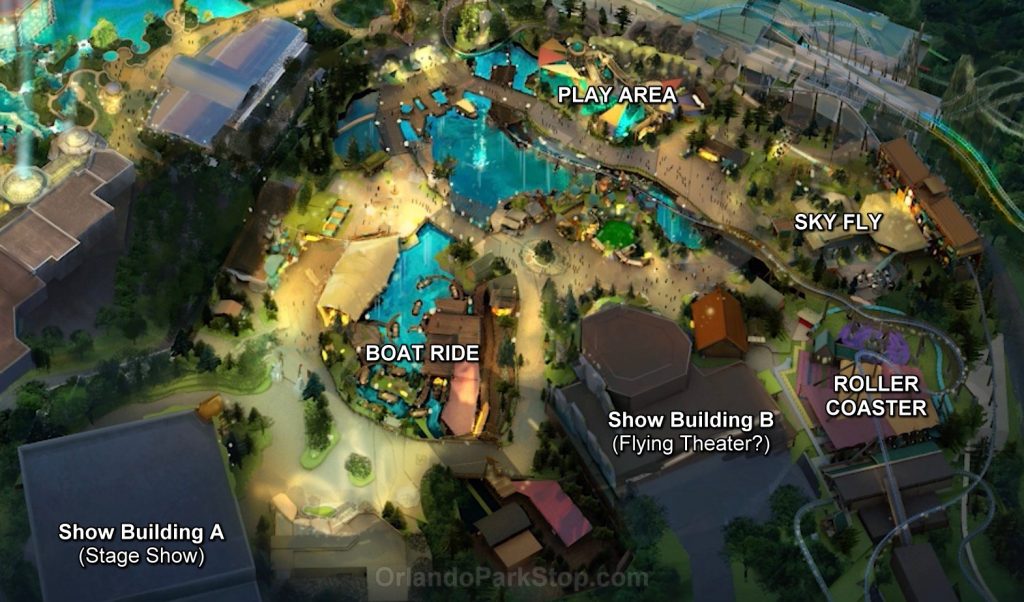 If we compare the site plans to the officially released concept art for Epic Universe, we can see that the structure for the inside coaster section directly behind the play area appears to be themed as a cliff-face, with rolling hills and rockwork. This may offer a nice backdrop to this section of the land while also blocking views of the neighboring attraction behind it. It is unknown whether there will be any scenes or theming within these interior coaster sections, like what can be found on the highly themed Hagrid’s Magical Creatures Motorbike Adventure. 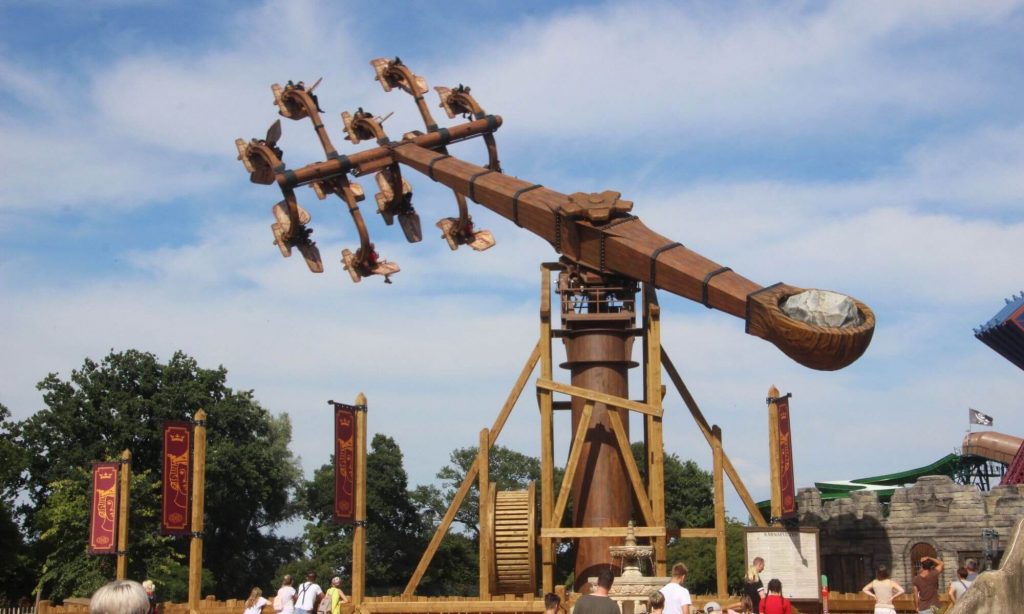 Located within the roller coaster track layout are what appears to be a pair of Gerstlauer Sky Fly rides. These strange contraptions have riders strapped into a collection of flying seats on one end of a spinning pendulum. As the ride rotates around, the individual riders have the ability to control how much their own ride vehicle spins. This means that the level of intensity for your ride is completely up to you. There appear to be two Sky Fly rides visible in the site plan, located side by side, to double the attraction’s capacity. 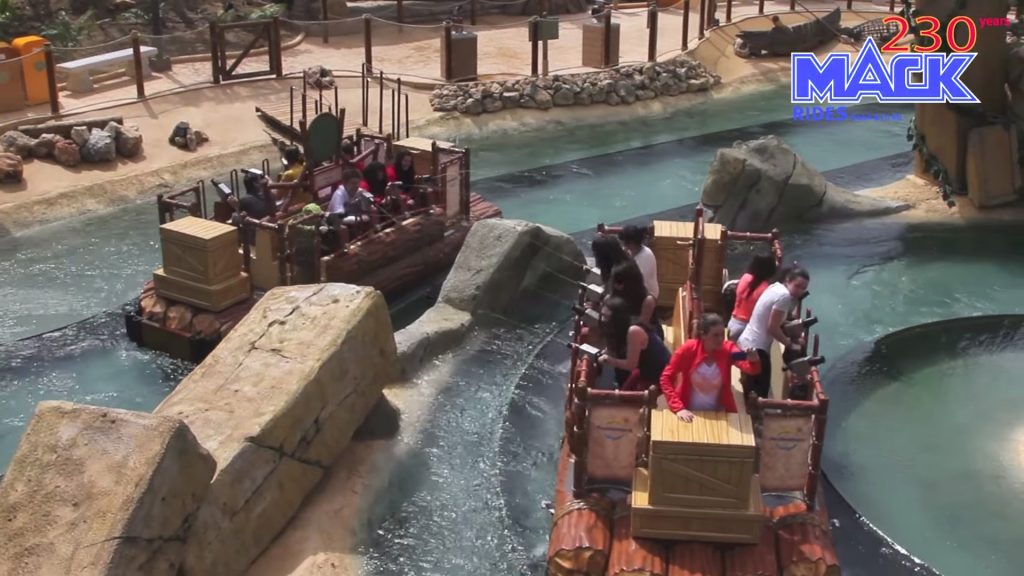 Located lower on the site plan is what many have speculated may be a Mack Splash Battle interactive boat ride. The track layout for this boat ride can be seen highlighted in blue on the image above. If this is a Splash Battle attraction, riders could use onboard water cannons to spray at various targets throughout the ride, and maybe even other boats as they pass. Guests not on the ride may be able to fire water cannons at the boats and the boat passengers can fire back. 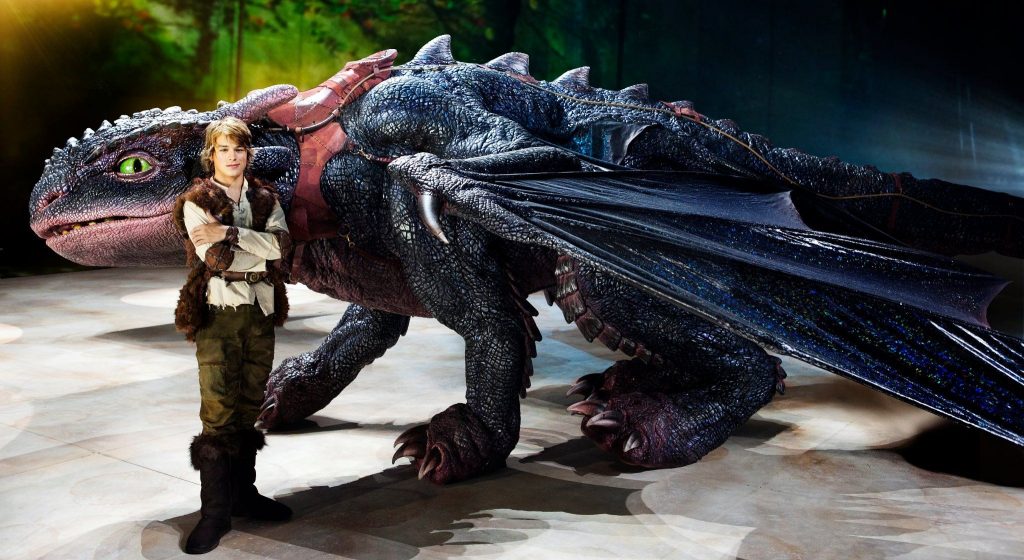 Publicity still for How to Train Your Dragon Live Spectacular (Photo: DreamWorks Animation)

The largest building in the site plan is located in the southern-most part of the land. It is rumored that this building will be split, with the the right-half utilized for some type of stage show. It is unknown at this time what type of show it would be, but a live-action show utilizing massive puppets and special effects, similar to the style of the touring How to Train Your Dragon Live Spectacular show, would fit perfectly in this land.

The left-half of the large theater building may be utilized for Team Member areas, including space required to house large dragon puppets and costumes for both the show and possibly neighboring meet and greets. Perhaps characters like Hiccup and Toothless could meet with guests in an area near the theater’s exit? There appears to be a short queue that leads to a smaller structure with easy backstage access near the theater building that could be used for this purpose. 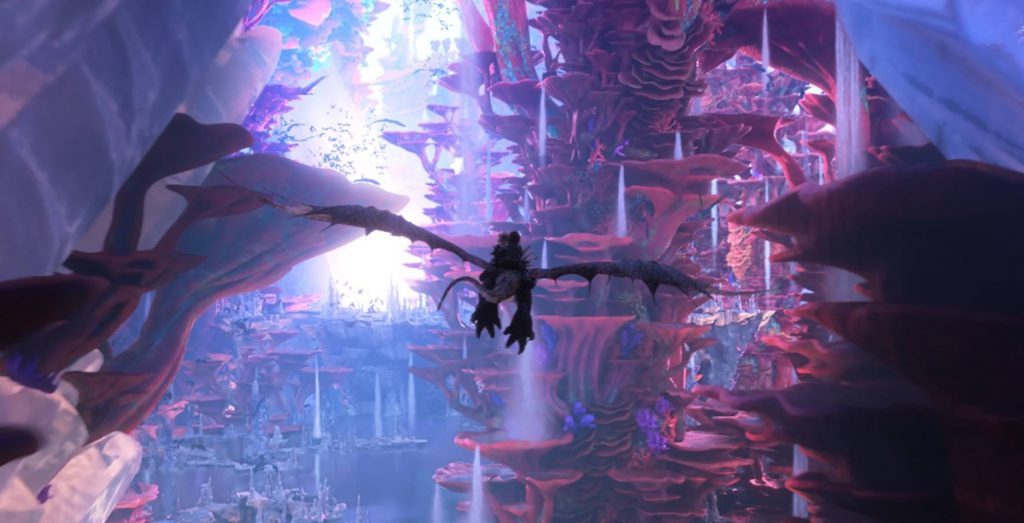 Scene from How to Train Your Dragon – The Hidden World (Photo: DreamWorks Animation)

One last large structure can be found in the center of the land’s site plans. It’s not yet known what this structure will house, but rumors for flying simulator ride at this land have been around for awhile. A ride where you could ride on the back of a dragon fits for the world of the How to Train Your Dragon films. This structure may be too small for a dark ride, but tall enough to be a flying theater attraction.

Universal did patent technology for a new type of flying theater attraction, lending credibility to the rumor. The patents call for a screen to be located below the riders, as well as in front of them. This would simulate what it is like to go paragliding, where your view is focused on what is below you, as well as in front of you. The patents show several different methods to accomplish this, and some of the diagrams even seem to include what could be a dragon-like seat.

Of course, it’s probably too early to know for sure what this large structure will contain. The site plans just aren’t specific enough to discern its exact purpose at this time. If it isn’t another attraction, that would still leave the roller coaster and stage show as the main rides in this land, with the boat ride and Sky Ride as additional attractions. 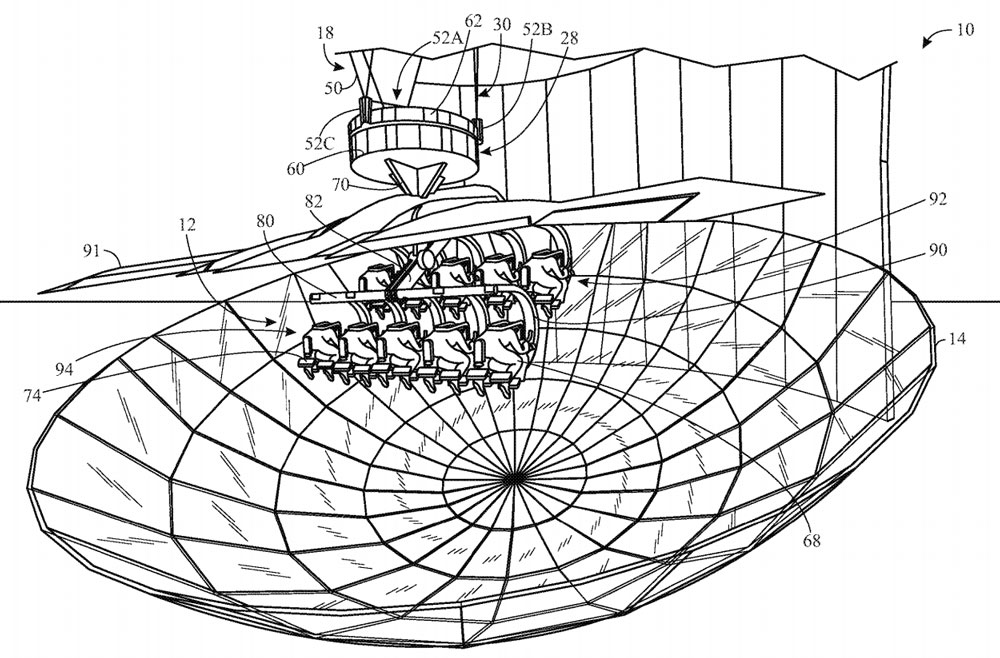 In case there were any doubts about this section of the new theme park being themed to How to Train Your Dragon, the site plans also include themed elements sprinkled throughout. Viking and dragon statues can be seen in the water as you first enter the land, dragon gliders and other sculptures can be found in a few areas, and the play area appears to contain dragon footprints along the pathways between viking ships that kids can explore.

The land looks to be themed as the isle of Berk from the How to Train Your Dragon film series, but set in a very specific time from the series. The two statues guests will see as they enter the land appear to be of a viking and a dragon, just like the ones seen at the beginning of the third film. Areas of the land appear to be themed as cliffs and other structures reminiscent of the village of Berk from the films. (It does not appear to be based on “New Berk” as seen at the end of the third film.) Check out the video version of this article for additional visuals. 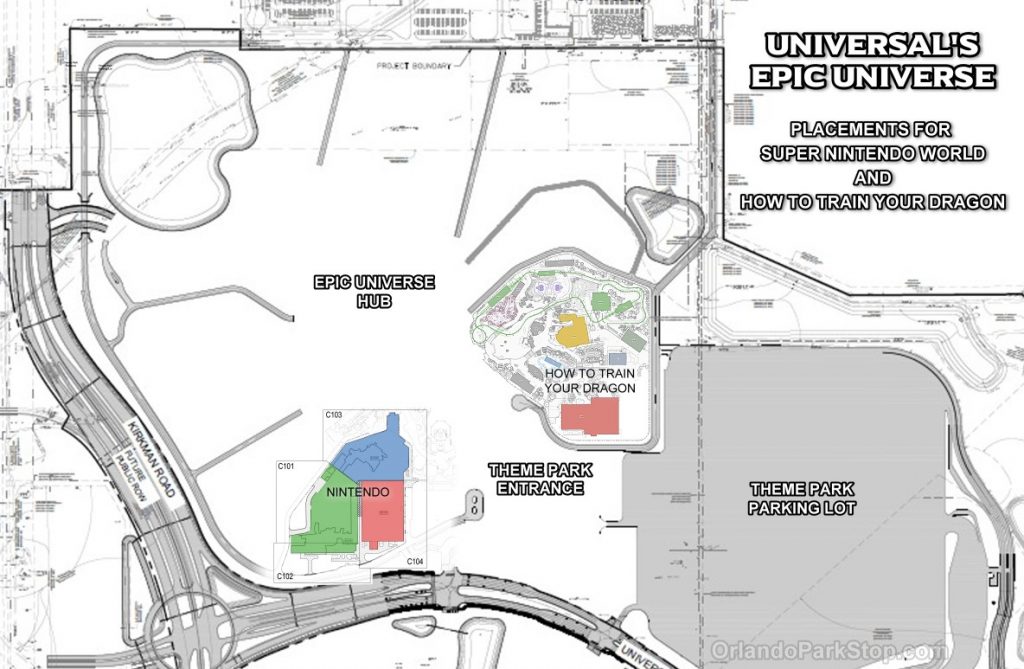 These site plans for the How to Train Your Dragon land are the second set of permits we have seen for the new theme park. Last month we got our first look at the site plans for Super Nintendo World, which will be located on the south-west area of the park. In the image above we can see how both lands will be situated within Epic Universe.

Universal’s Epic Universe is expected to open sometime in 2023. Stay tuned to the site for continuing coverage of the new park. Hopefully we’ll get our first look at the Universal Classic Monsters and Fantastic Beasts areas of the park next, as well as attractions for the central hub, which will include a massive dueling roller coaster. Subscribe to our news feed or enter your email address below to never miss an update, and see our full list of Epic Universe related articles here. 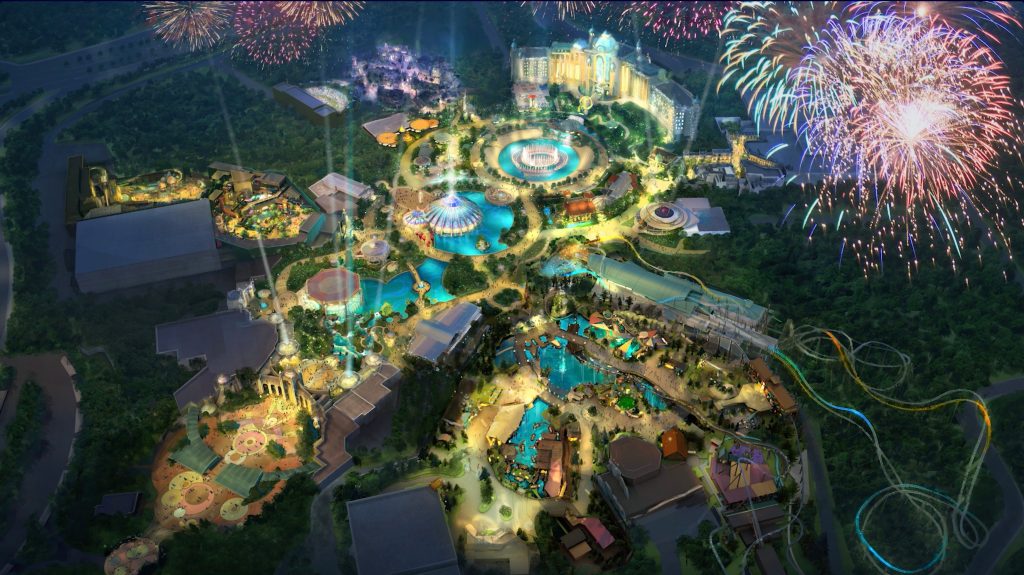