So far we’ve been able to learn quite a bit about most of the lands for Universal Orlando’s upcoming theme park, Epic Universe, but there’s still one land we haven’t seen many details for.

A new Wizarding World based on characters and locations from the Fantastic Beasts series is rumored to be the fourth land for the park. The other three lands will be based on Nintendo, Universal Monsters, and How to Train Your Dragon. Let’s dig into some of the rumors for what types of attractions and settings we could see in the land based on Fantastic Beasts. Watch the video version for additional visuals.

Located in the back-right section of Epic Universe, just to the right of the hotel that will be connected to the park, this new Wizarding World land is rumored to be based on the world of the Fantastic Beasts and Where to Find Them film series. The area is said to be themed as 1920’s Paris, as introduced in the second film. 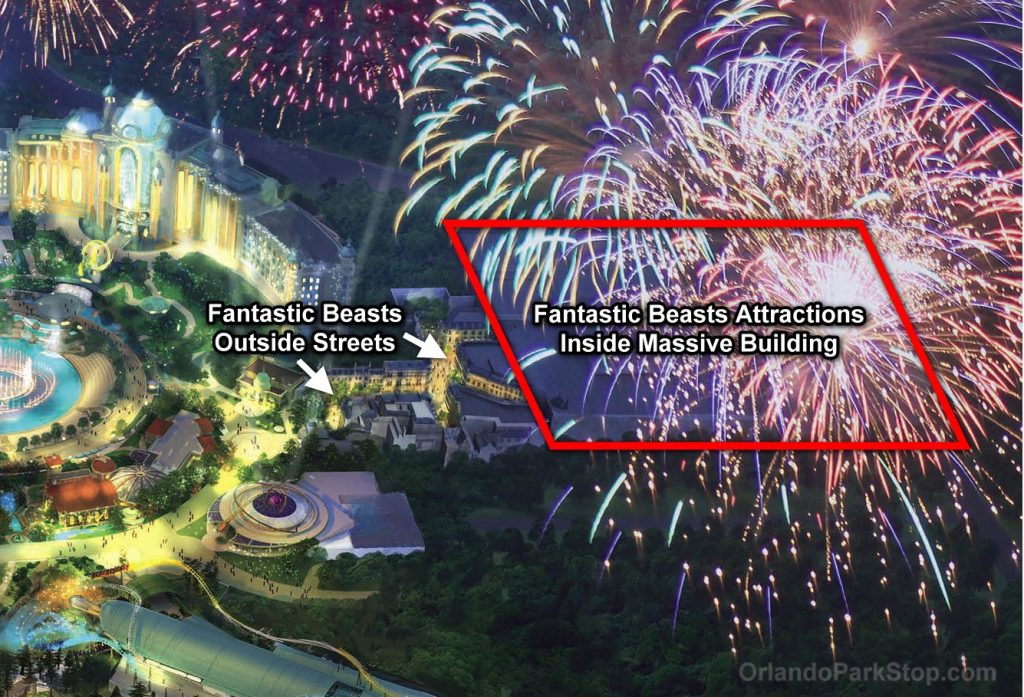 What will set this land apart from the others, is that a large portion of the area will be set indoors. While the entryway and main street will be outdoors, recreating a street seen in the film and built in a similar style as Diagon Alley at Universal Studios Florida, the land will then transition to an indoor area. This could be similar to the way Knockturn Alley is set up at Universal Studios Florida, off of Diagon Alley, creating an area that is eternally night by enclosing it. 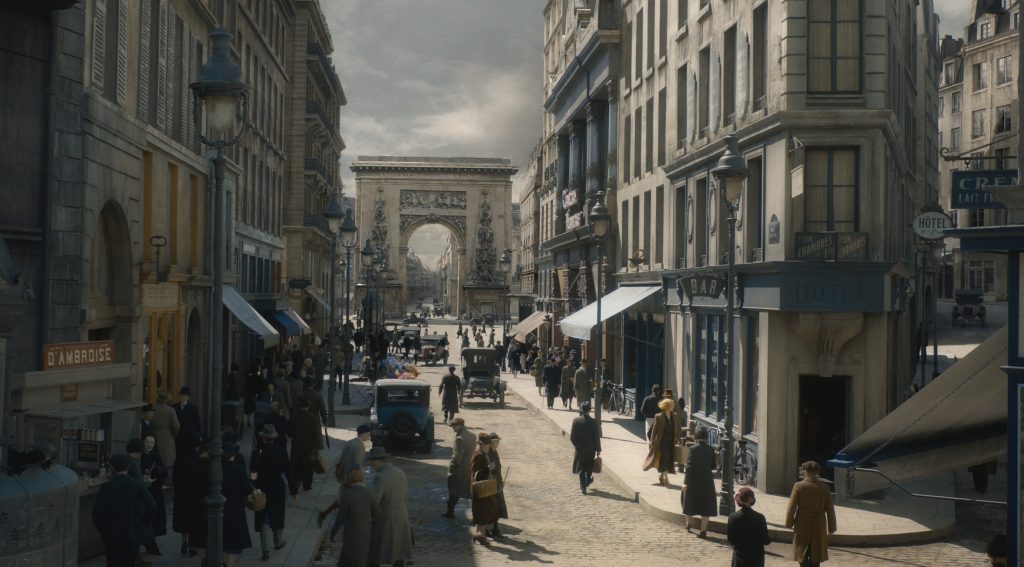 The outdoor section, themed as Parisian streets, will likely contain several small shops and dining locations. The Wizarding district from the film, Place Cachée, could be recreated, perhaps including specialized shops like Cosme Acajor, which sells wands in triangular prism-shaped boxes, a Quidditch shop named Gaston McAaron, and the Monsieur Sanfin cauldron shop. Other shops for pets, candy, books, and a clothing shop offering uniforms for Beauxbaton Academy can also be found in these areas. For dining, a pub called the Drinking Griffin can be found, as well as a bakery.

The storefronts and alleys may continue into the large show building as well, leading to the three rumored attractions. The roads will split into different directions. While it has not yet been confirmed, we think there will be a theater of some sort and two rides. At least one of the attractions is thought to take place in the French Ministry of Magic. Another of the rides is expected to take us on a wild ride through the streets of Paris. 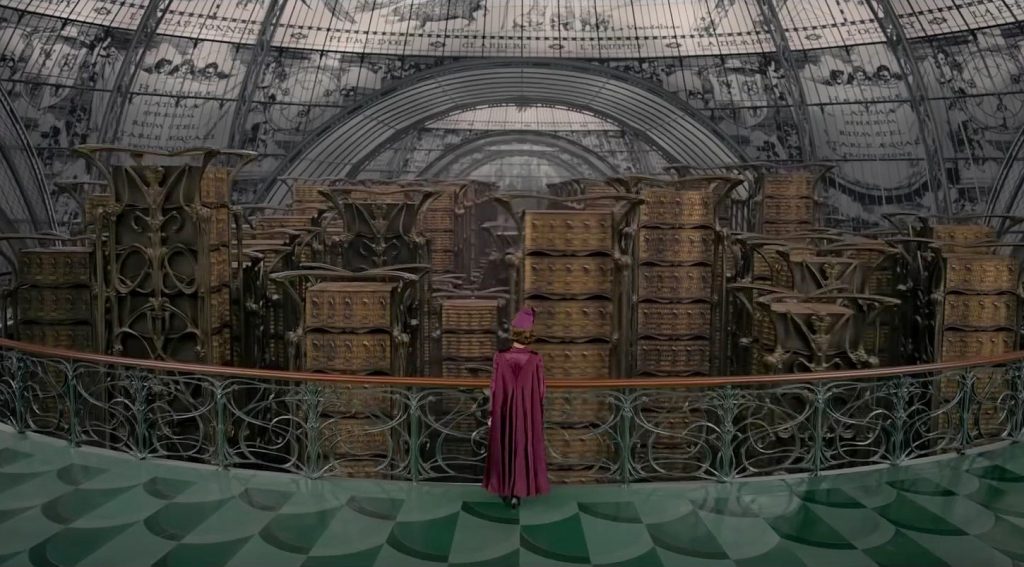 UPDATE 5/11/2020: New information reveals an attraction set in the British Ministry of Magic may be the land’s main attraction. Learn More

The land’s main attraction is rumored to be a ride where we’re traveling through the streets of Paris, attempting to help round up all of Newt Scamander’s escaped creatures. Possibly employing techniques developed for a never-built Ministry of Magic attraction. Thought to have been designed for a possible expansion to Diagon Alley, patents show how a ride system could use false walls and special effects to give the illusion of teleporting from one location to another while riding on a moving vehicle. 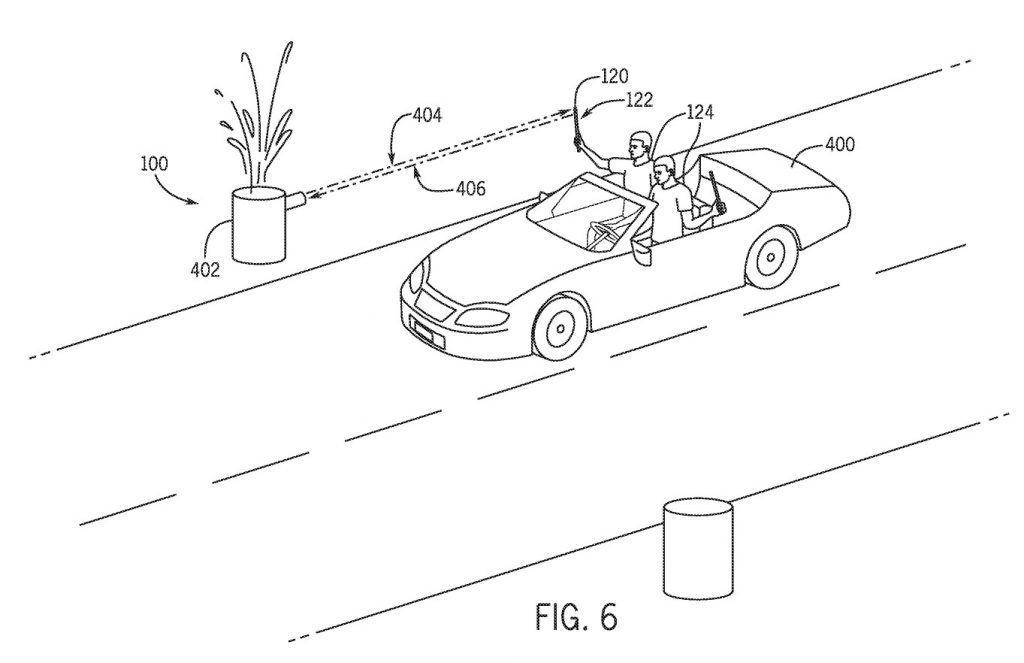 To help Newt round up the creatures, another patent that expands the use of the Wizarding World’s interactive wands, could allow us to perform magic while riding, which in turn would set off physical effects on the ride. It’s not known whether we would be provided with an on-board wand, like the zappers on Men in Black: Alien Attack or not, but I have to imagine it could be a safety risk to allow us to use our own wands that aren’t tethered. 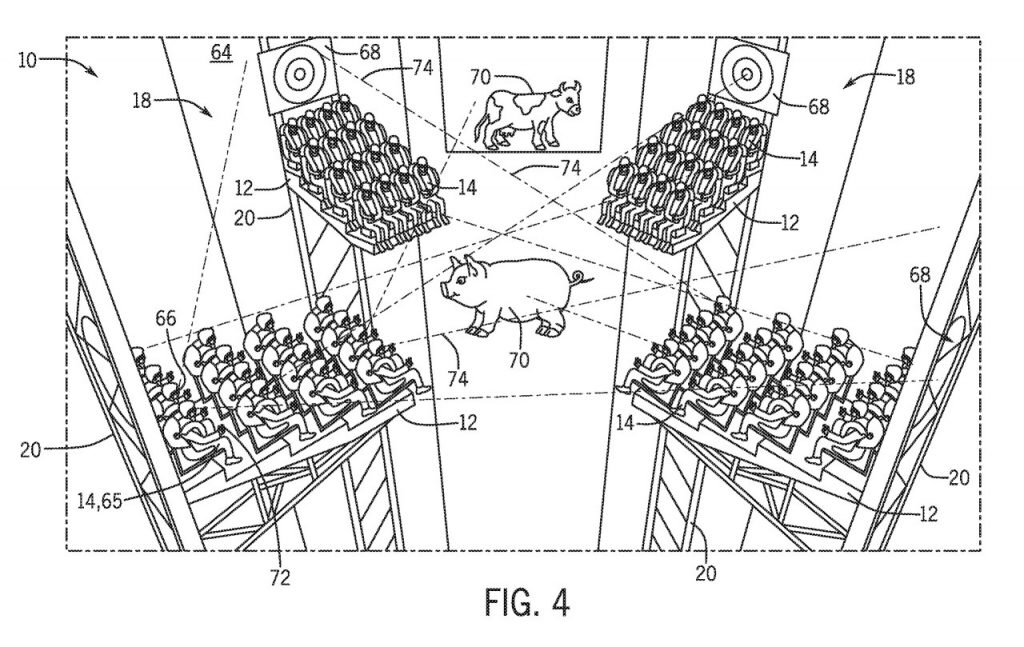 The other large ride is strongly rumored to be some sort of tower attraction. Not as tall, or thrilling, as something like the Tower of Terror, but Universal has patented two unique tower-based ride concepts in recent years. One of these possible concepts would utilize interactive elements to allow riders to compete, or work together, during the attraction. 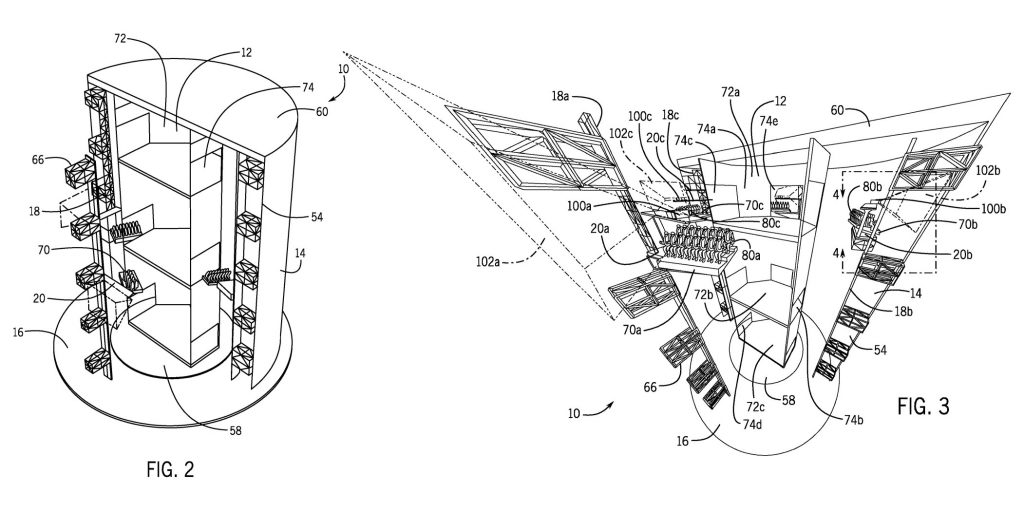 The other tower patent, which may be more suited for the land, would allow ride vehicles to not only travel up and down, but it could also go into and out of rooms. Think of it as the first parts of the Tower of Terror at Disney’s Hollywood Studios, but minus the drop tower conclusion. We could go up, enter multiple rooms, back out and repeat, while the story unfolds around us. If done in a fast-paced way, I could see this as a possible French Ministry ride, featuring characters and creatures from the series.

Nothing has been rumored for the third attraction, which sounds like it might be a fairly large theater set near the two rides. Some speculate it could be themed as the Lestrange family mausoleum as seen at the end of The Crimes of Grindelwald. It’s possible the area could be used for multiple purposes, with shows ranging from audience participation wand battle demonstrations to full-on narrative performances. 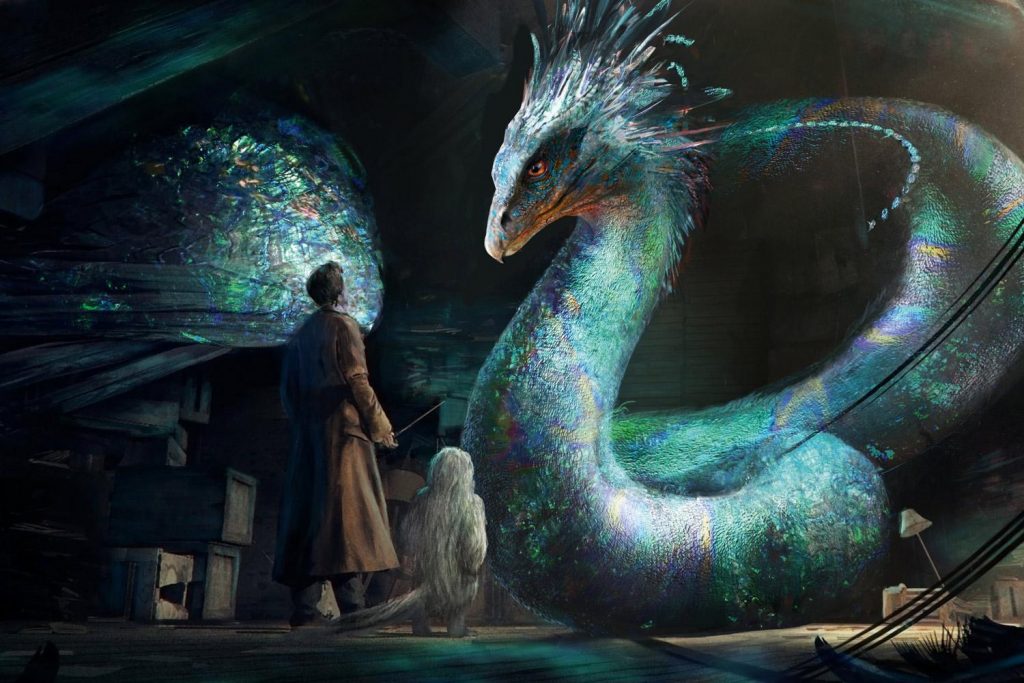 Image from The Art of the Film: Fantastic Beasts and Where to Find Them by Dermot Power

Another rumor for the land itself is that there will be hidden (and some not so hidden) fantastic beasts located all around. Creatures will be found in windows and on rooftops, inside buildings and outside. Part of the reason for enclosing some of the streets within a large structure might be so they could have animatronic creatures in a weather controlled environment. In true Wizarding World fashion, guests would be able to use their interactive wands to interact with creatures as they discover them. 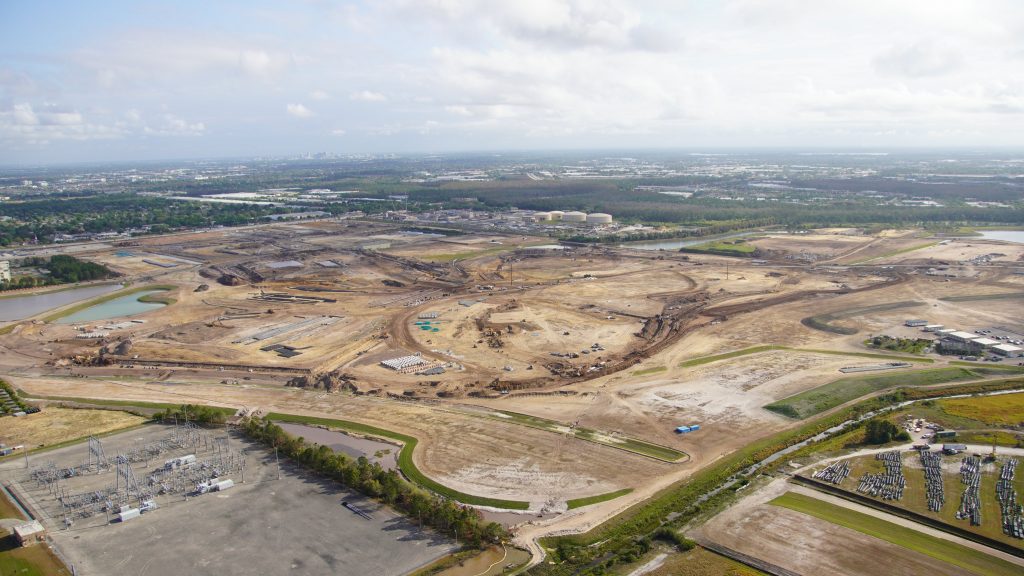 Construction for Universal’s Epic Universe has continued, despite the theme parks being closed at this time, and it’s expected to open in 2023. We’re still waiting on permits for this section of the park to be reviewed by the county before we’ll be able to get a look at them ourselves. That may help give us some more insight into exactly what this land will offer.

Stay tuned for continuing coverage of the new park, including rumors, construction updates, and additional permit information as it becomes available. Be sure to check out our previous articles for Epic Universe, including site plans for Classic Monsters, How to Train Your Dragon, and Super Nintendo World. And see the video version of this article for additional visuals. Subscribe to the news feed or enter your email address below to never miss an update!