Now that Universal Studios Japan has re-opened to guests, we’re getting some great views of a fairly complete-looking Super Nintendo World. The new land was originally scheduled to open by “this summer,” but Comcast executives recently said that they’re expecting a several month delay.

Regardless of when, it definitely looks like it’s getting ready to open. So, let’s dive into an updated look at the land, as well as recap everything we expect to find at the world’s first Super Nintendo World. Be sure to check out the video version of this story below for additional visuals.

Visual Updates for the Land

In recent days we’ve been able to see the new land testing some of the moving elements, as you can see in the tweet below. Plus, we’ve seen them testing the land’s nighttime lighting, with question blocks and Bowser’s eyes glowing. 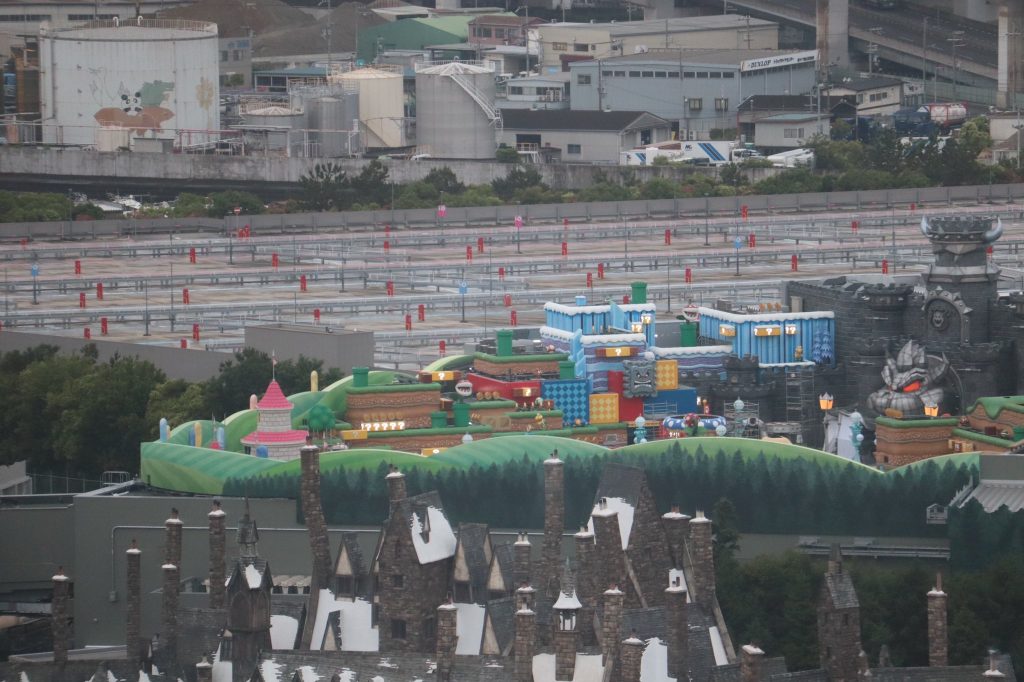 Nighttime lighting being tested in the land, (Source)

With guests now walking around inside the park we’ve also been able to get an idea of how the outside of the land appears from various spots, as you can see in the photos below. 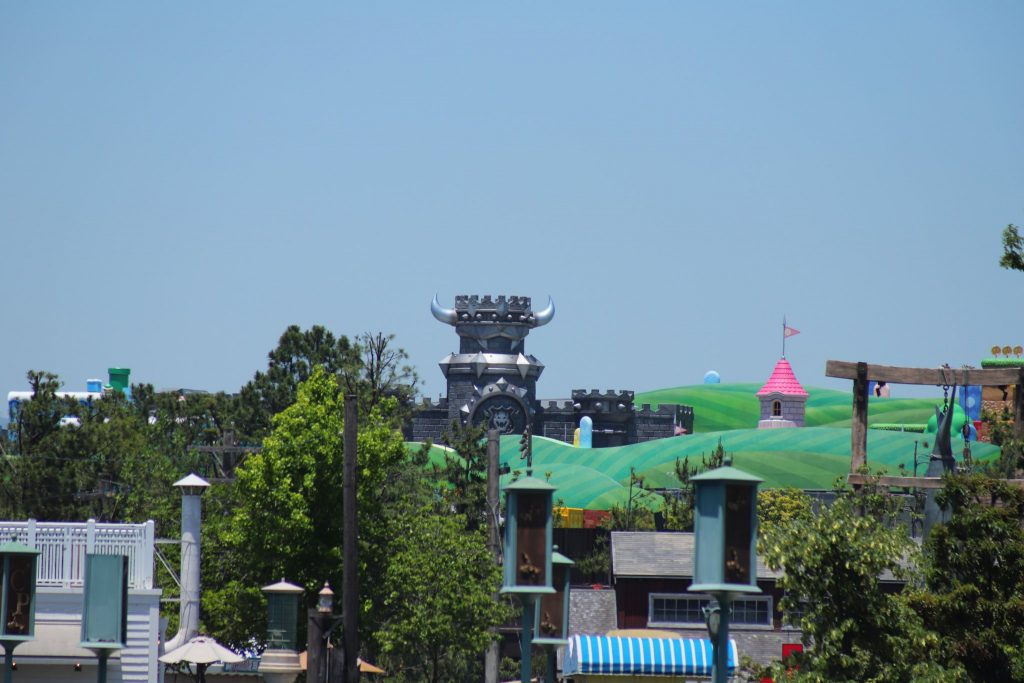 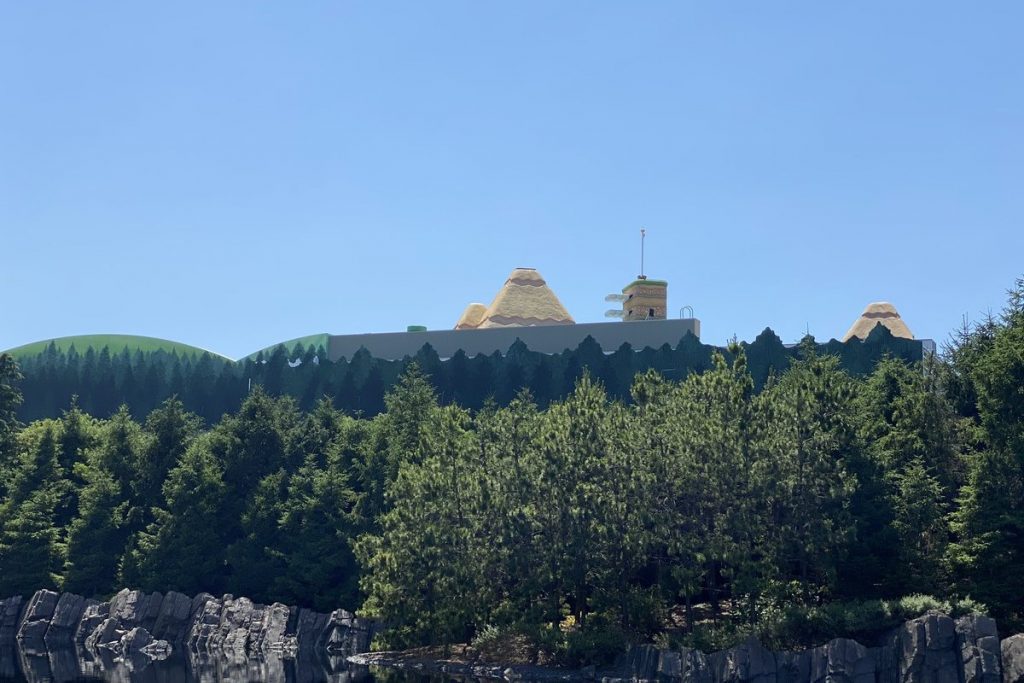 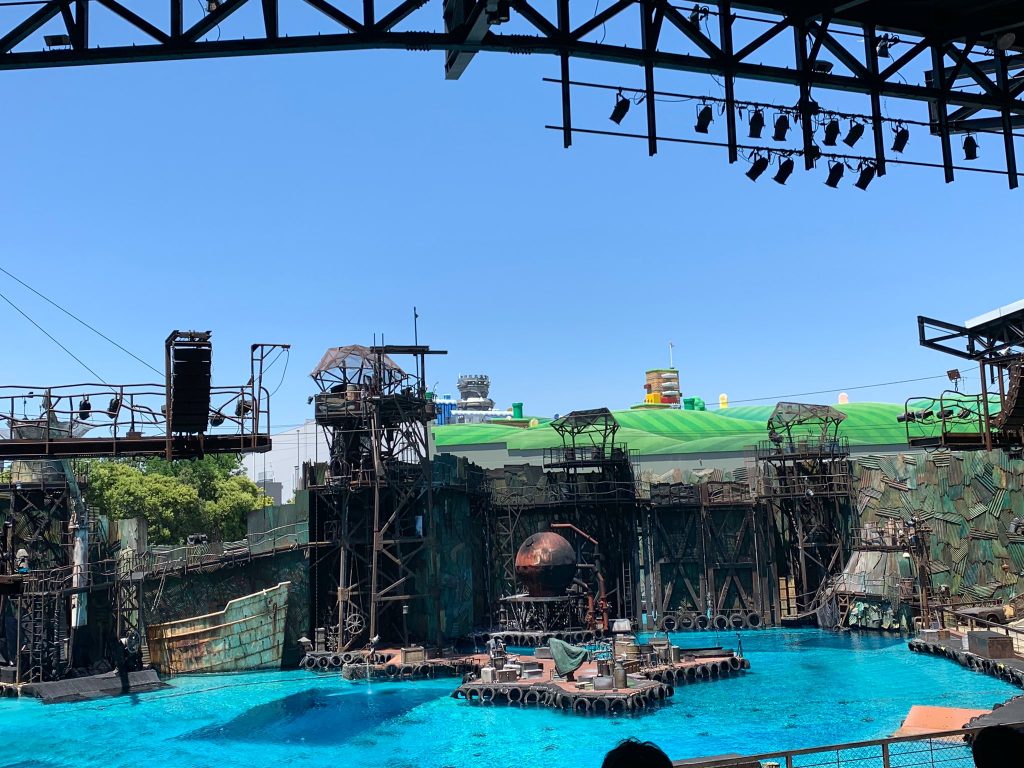 New signs have even gone up in guest facing areas near the land’s entrance, although they have been covered. 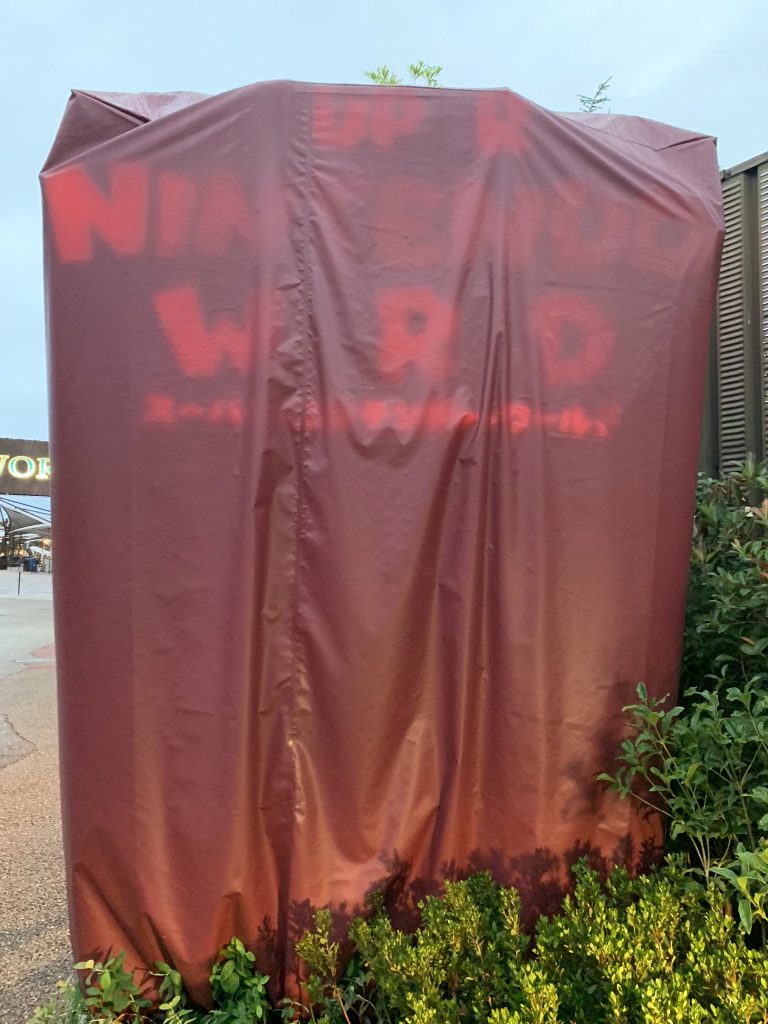 In the aerial photo below we’re getting our best look at the land thus far. Now keep in mind the land is not meant to be seen from this angle, so what looks like unfinished roofs is actually how they’re mean to be, as no one will ever see the tops of the structures from the ground. Also, this image is now a couple weeks old, so some of the areas that were still covered in scaffolding may now be finished. 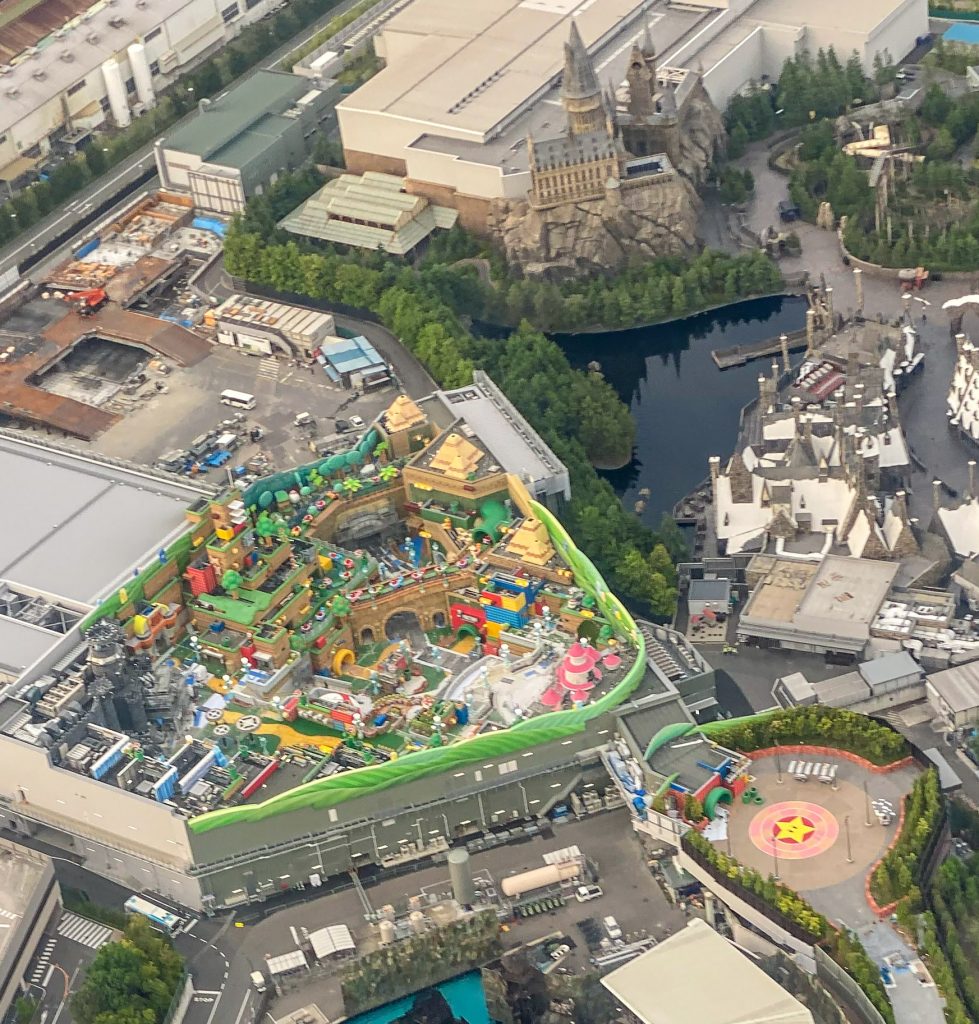 The land entrance will be from the new round courtyard area seen on the bottom-right. Guests will enter a green warp pipe which will take them through the lobby of Princess Peach’s Castle. You will then exit the castle into the land on the second level. Going from the castle to the left on this level we can see a lot of the interactive areas, with elements outside to interact with and places to explore and bad guys to defeat inside the buildings. 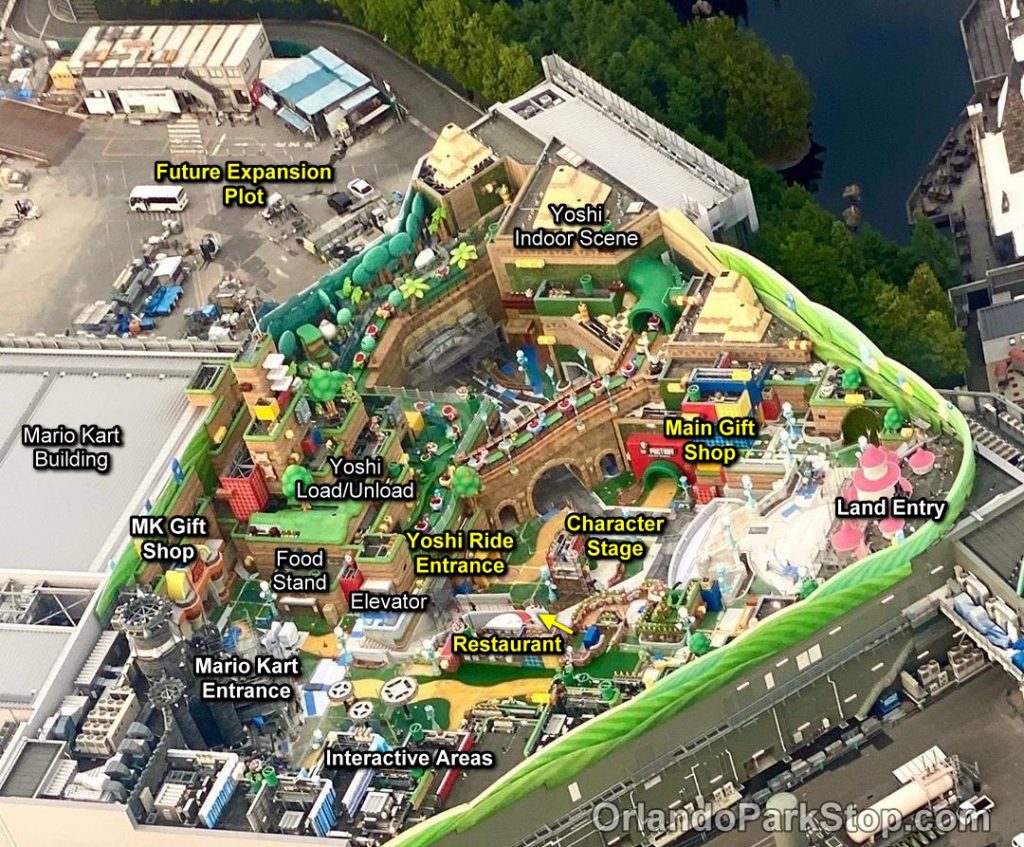 Moving clockwise, the next thing on the upper level is the entrance to the Mario Kart ride. Then a gift shop named Mario Motors and a quick service window, elevator, and a staircase down to the lower level. The only guest area to the right after you exit Peach’s Castle into the land is a meet and greet and another elevator down. Stairs to go down to the lower level can also be found in front of the castle.

On the lower level of the land you’ll find a character stage in the middle of the courtyard, the land’s main gift shop on the right, and the land’s main restaurant on the left. The entrance to the Yoshi ride is down here, even though the attraction itself takes place on the upper level. And an entry portal to the land’s future expansion area can be seen in the back, after passing under the bridge on the right.

Most people believe that the second phase expansion for Super Nintendo World in Japan will be the Donkey Kong ride and mini-land. The expansion plot in this area is exactly the same shape and size as the plans for the future Orlando version of this land, and jungle theming has already been added along the side wall of the Mario Kart ride building. This matches what we saw in the leaked model photographs for the land. 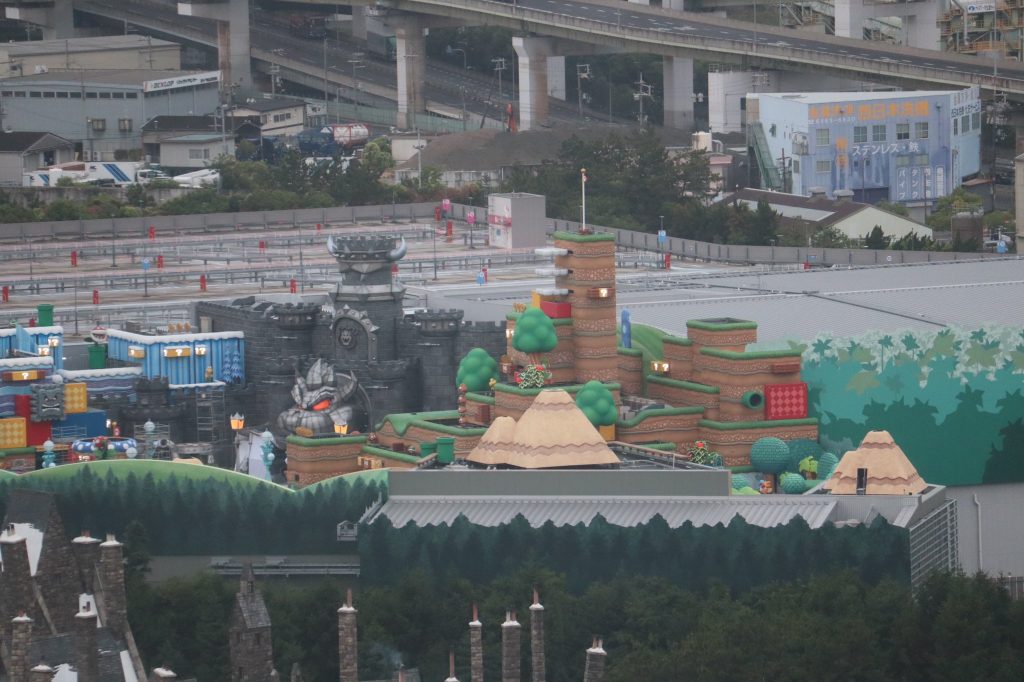 Jungle-themed mural on side wall of Mario Kart building at right, (Source)

No word yet on when this expansion will be completed. The plot was used as a staging area for materials and equipment during construction of the land. If it does end up being for Donkey Kong, we can expect to see the mine cart roller coaster where it appears that your car jumps over gaps in the track. A small outdoor shop, snack stand, and meet and greet area would be expected as well.

Universal had announced that the land will offer Power Up Bands as a way for guests to interact with special elements and even play in life-size environments based on Super Mario games. You can collect coins, defeat bad guys, earn virtual rewards on the app, and even work together with other guests in something called boss battles.

Another interactive element located in a few places around the land are the AR Binoculars. These items that we first saw in leaked photos of the model of the land, and then again in official concept art, can now be seen in actual photographs of the land. They are rumored to allow you to see additional elements, like characters or other items, overlaid onto reality when you look through them. They may even assist you in finding hidden items when participating in interactive games. 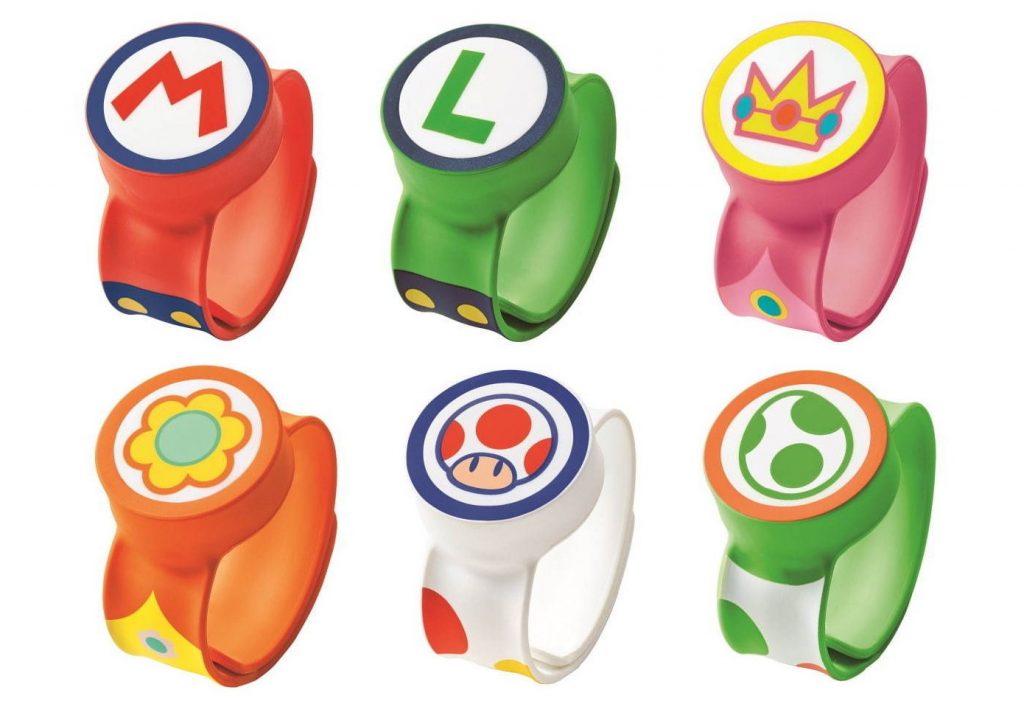 Power Up Bands will allow you to interact with the land, (Photo: Universal Studios Japan)

I do wonder how they will handle these elements if the land was to open in a time of social distancing and extra safety precautions. I suppose it’s always possible that the interactive areas themselves could be closed upon the land’s debut, to be opened at a later time. Or, they may just take extra precautions, maybe similar to how the dark rides at the parks require all guests use hand sanitzer before riding.

The main attraction for Super Nintendo World is of course the Mario Kart ride. The entrance is through the Bowser Fortress facade on the upper level. In fact, all of the queue for this ride will be located on the upper level, leaving the entire first level just for the ride itself. Much of the queue is expected to be themed as Bowser’s Fortress. 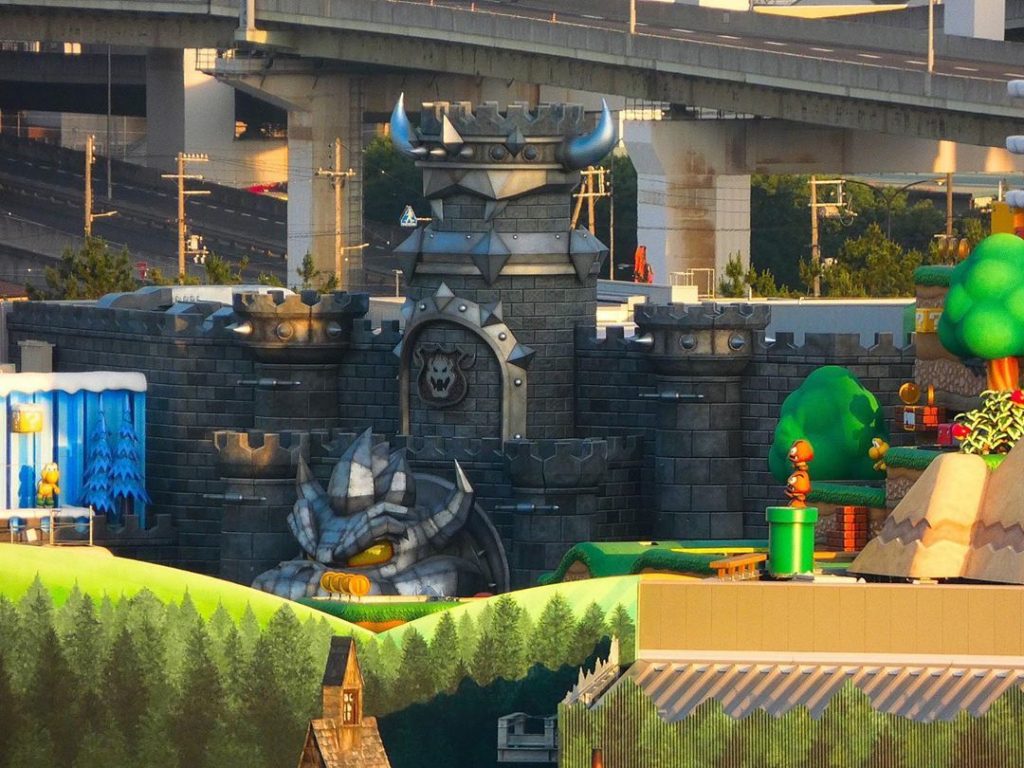 Recent photo of the entrance to the Mario Kart ride, (Source)

The ride will feature a dual track design, and two cars will start the ride together at the same time, to give it a competitive racing feel all the way through. This dark ride style attraction will feature a mix of practical sets and special effects to make you feel like you are passing through many different racetracks featured in the video games.

There has not been any confirmation on how the interactive elements will work on the ride, like throwing shells and earning points against your opposing car. Additionally, we’re still not 100% certain is Augmented Reality goggles will be used or not. The AR goggles were in the original plans as a way to add special items and additional elements over top of reality while you ride, but rumors of difficulty integrating the technology in recent months has brought their use upon opening into question.

Guests will exit this attraction through the gift shop to the right of the ride entrance, named Mario Motors, as seen in the photo above.

The other ride set to open with the land is Yoshi’s Adventure. This is an omnimover-style attraction, and is utilizing the same ride system as the Secret Life of Pets ride that’s about to open at Universal Studios Hollywood. Although, unlike that ride, where you ride inside a ride vehicle shaped like a cardboard box, this on will have you riding inside of a Yoshi. Just like the Pets ride, Yoshi will only hold two riders per vehicle.

The ride will have its load platform upstairs, but the entrance to the ride is on the lower level. Most of the ride takes place outside, as you can see in the aerial photographs above, however there is one indoor scene. We still aren’t sure what will happen during the inside segment, but there are rumors that we may see baby Mario and baby Peach, or other characters from Yoshi games.

The finale for the ride takes us through some forest theming featuring baby Yoshis. Some have speculated that the palm trees in this scene are related to the upcoming Donkey Kong expansion, but they are only intended to be a part of this Yoshi ride scene, although their placement above the portal to a possible Donkey Kong land is a nice foreshadowing for guests walking towards that area. The Yoshi ride exit is also located on the lower level, just behind the bridge. 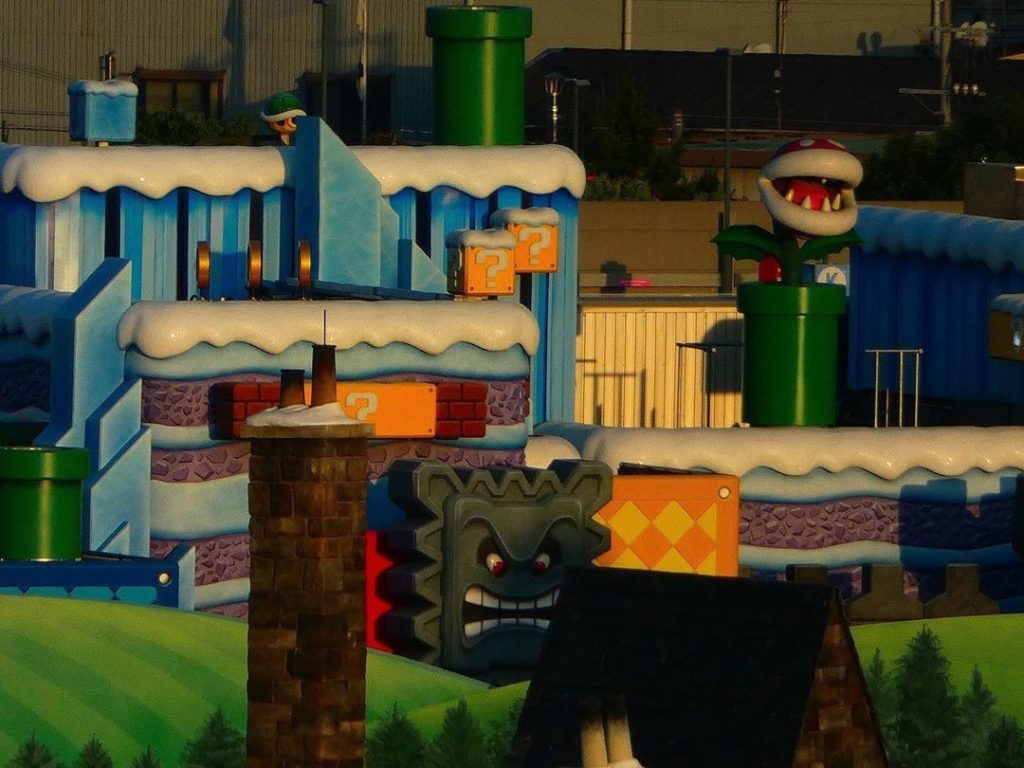 Closer view of some of the land’s elements, (Source)

The land looks to be just about ready to receive guests, and had we not been hit by a global pandemic, it may have already opened by now. After opening in Japan, Super Nintendo World is also slated to open in Universal Studios Hollywood, Singapore, and at the Universal Orlando Resort. Stay tuned for more news about this land as it happens.

And for up to date photos and video for this land, visit the good folks at themeparx.com for the latest updates! Subscribe to the news feed to never miss an update here, or enter your your email address below.