Now expected to open by Summer 2025 at the latest, Epic Universe is moving “full steam ahead” according to Universal executives. With nearly all permits approved and more on the way, it seems things are certainly starting to pick up.

Let’s check in on all the construction happening around the Epic Universe site, what we can learn from new permits, and what some of the rides could be like in today’s “Epic” news update. Check out the video version of this story below for additional visuals.

During the recent 4th quarter earnings call for Universal Parks’ parent company, Comcast, executives said that they expect to have the new theme in Orlando open by the summer of 2025 at the latest. Shortly after the earnings call, Universal Orlando’s official Twitter account tweeted “Summer 2025,” adding more excitement to what would’ve otherwise just been a comment meant for investors.

After reporting the best quarter for Orlando’s theme parks since Comcast took control of the company, they now say they’re preparing to spend around $1 billion on the construction of Epic Universe over the course of 2022. That amount is similar to what was spent in 2019 at the start of construction for Universal Studios Beijing, which opened last year.

Within the first month of the year so far, multiple Notice of Commencements have been filed with the county. Filed for multiple construction companies, these documents reference permits for different areas of the park including where we believe Super Nintendo World will be located, a land based on Universal Classic Monsters, Wizarding World, the new park’s hub, and some back of house areas.

The notice and permits for the back of house areas are very specific, and include details for three massive new structures set to be built. The first, known as “Office 2” and “Building 1000” in the plans, will be for Team Member services at Epic Universe. 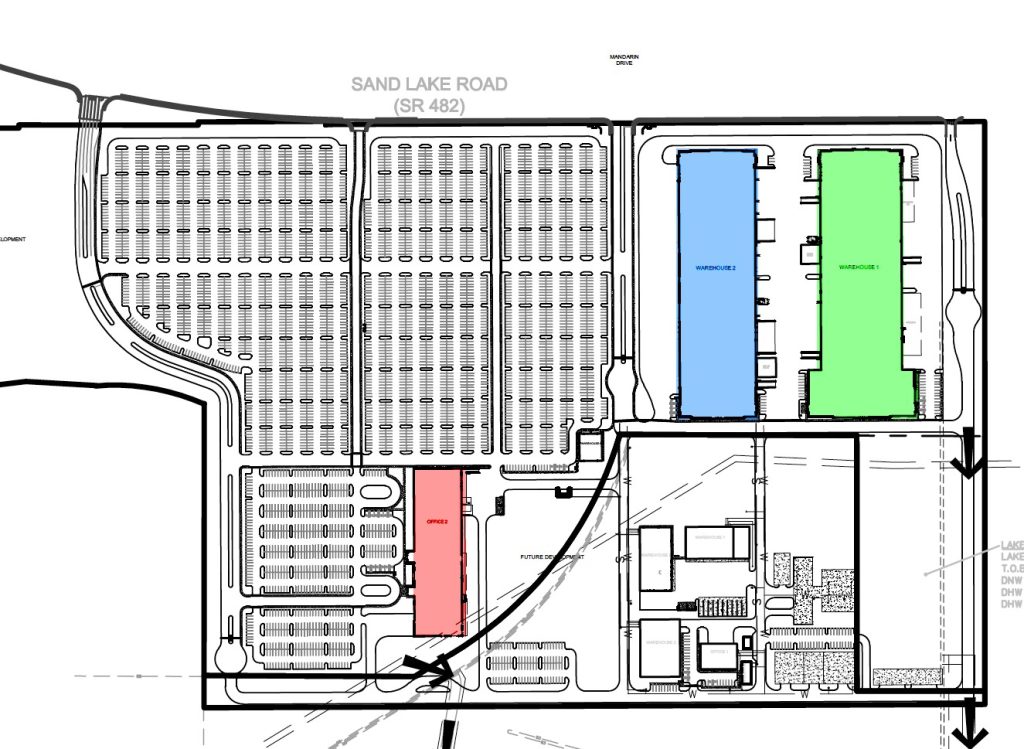 Backstage plans, Office 2 seen in red, Warehouse 1 in green, and Warehouse 2 in blue

This building will be split, with one half set aside for several stories of offices, and the other half serving as Team Members services. According to permits, there will be a laundry facility, locker room, clinic, and Team Member grill on the first floor of the building.

Looking at recent aerial photographs from Bioreconstruct on Twitter, we can see the footprint for this split office and Team Member services building is already in place. Nearby, south of the structure, appears to be the outline for what eventually may become a shuttle pick-up/drop-off for Team Members. The Team Member parking lot, which was added first, is located on the other side of the structure. 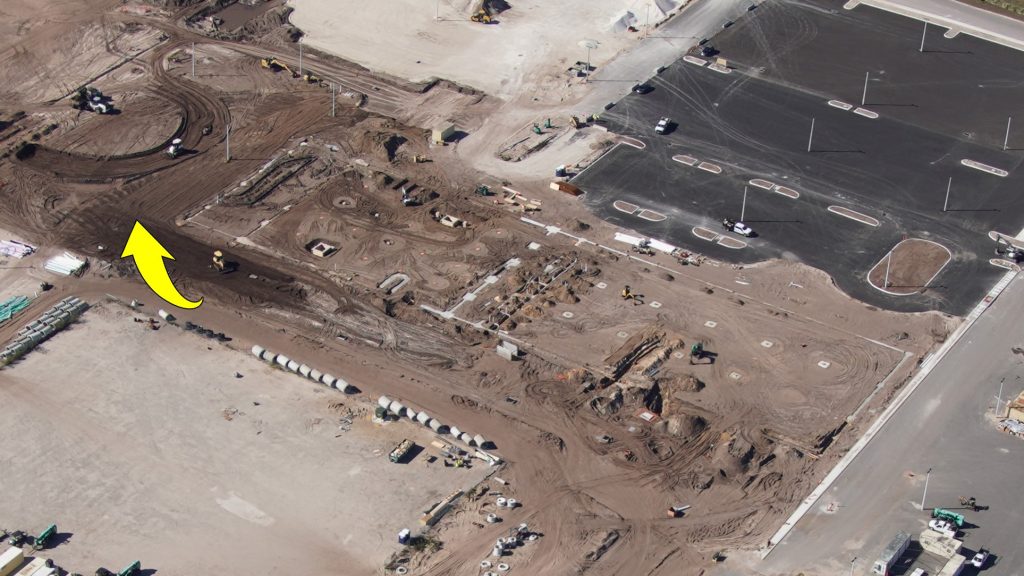 Permits also describe two gigantic structures that will be built in the backstage area. “Warehouse 1” and “Warehouse 2” will be built near Sand Lake Road, at the very back of the property. The footprints for these large structures can already be seen in aerial photos, but construction has not yet started on them. 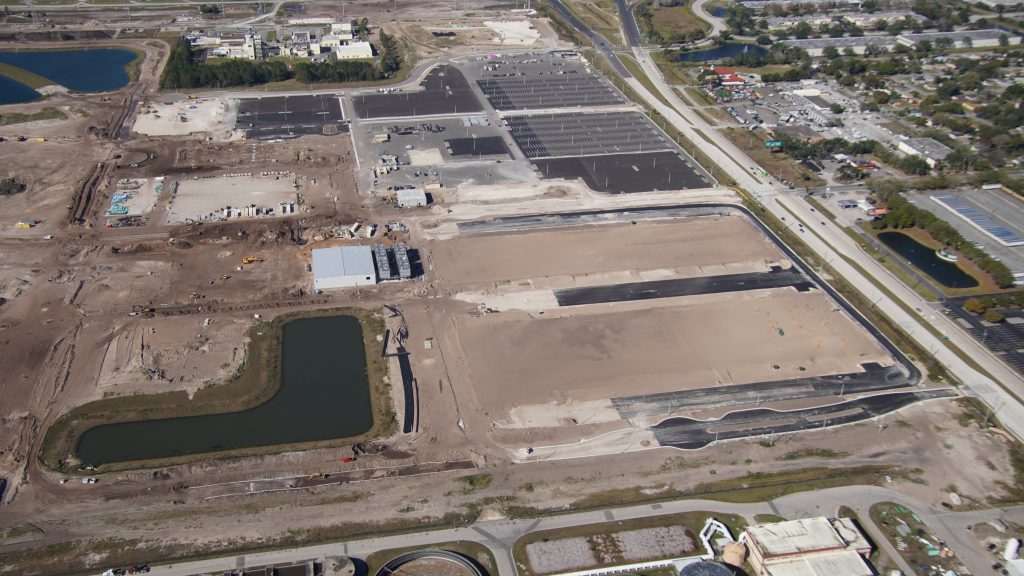 Footprints for two large warehouses on right, TM parking at back of image, Photo: @bioreconstruct

Also backstage, major construction for the large chiller plant appears to be complete, or at least nearly complete. This will likely act as a massive air conditioning unit, providing AC for much of the new park. The small warehouse that started construction a couple months ago is coming along as well, and is now full enclosed. 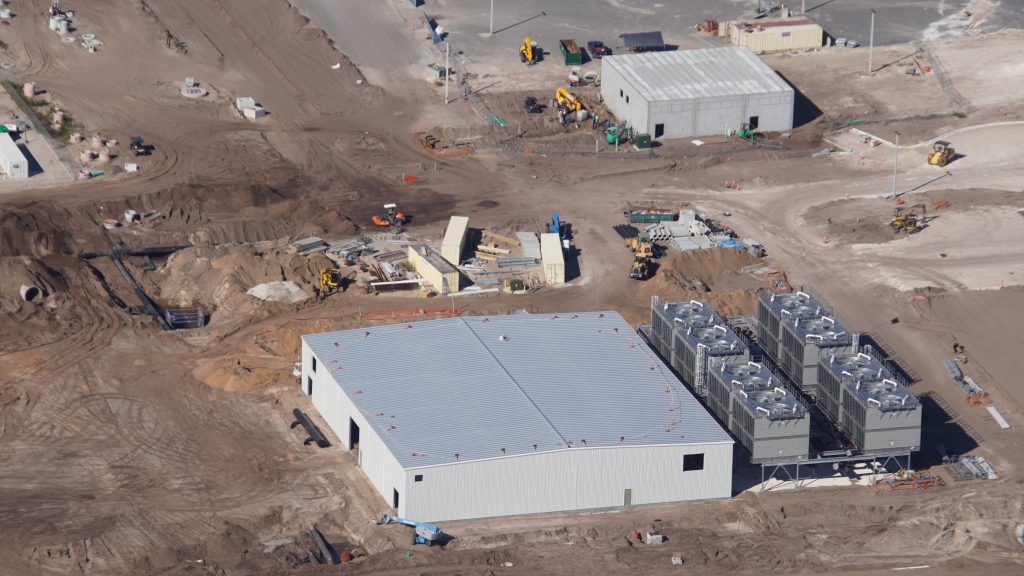 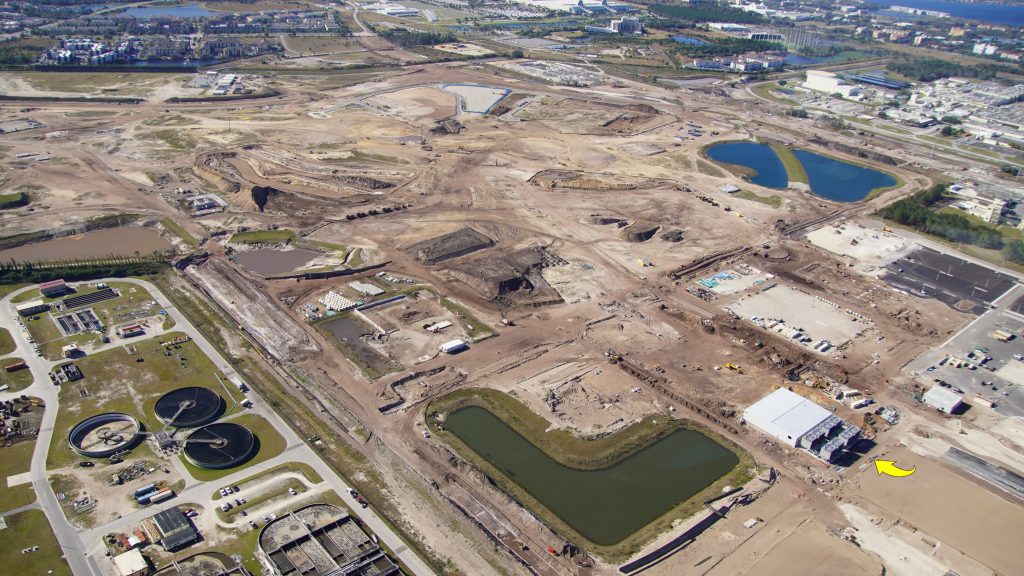 Moving down to the actual theme park itself, grading work has continued in the expansion plot we talked about in our last update. It does appear that the grading work was to prepare the area for construction staging, as many predicted. 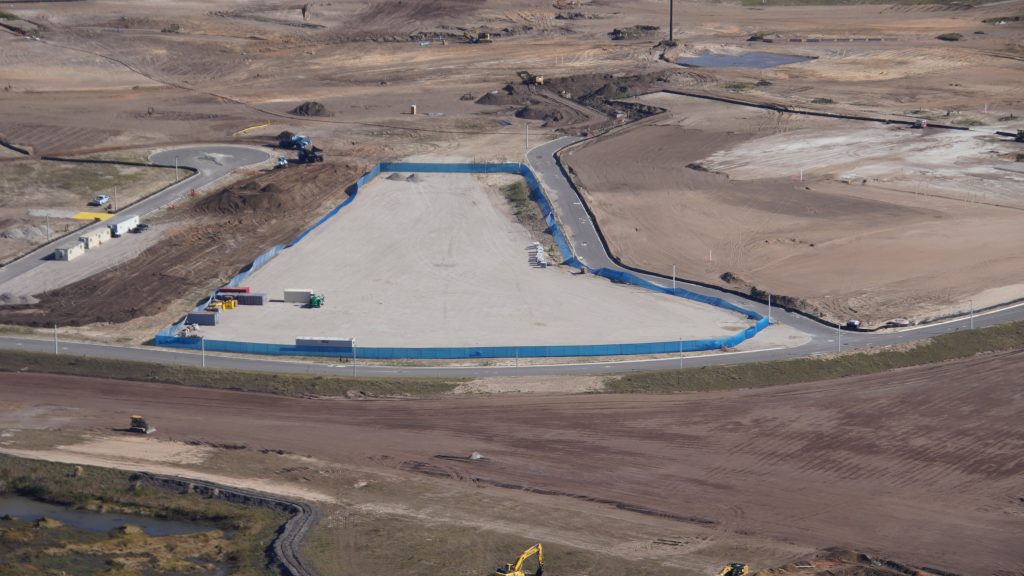 One theory has this area being prepped to receive the new temporary concrete plant. This new plant, wherever it is built, will be used to produce concrete for pouring foundations around the theme park areas, and will then be dismantled when the work is complete. This centralized location, with direct access to each of the lands via the hub would be ideal for the concrete plant, but we will have to wait to see what happens.

With notice of commencements submitted for most areas of the park, we should see work noticeably pick up in the coming months. Most permit fees appear to have now been paid, after sitting unpaid for some of 2020 and most of 2021, while major construction on the park was paused. 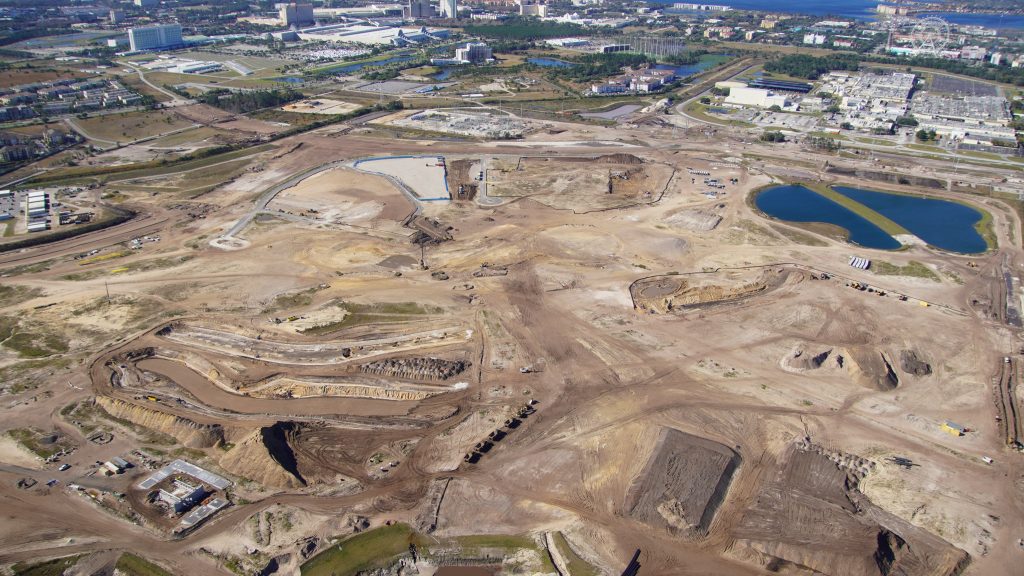 Some of the latest permits to be approved are for areas of the new theme park’s central hub. The structure many believe may be for a carousel is included in these permits. Universal has patented a unique type of carousel technology, which may lend some credibility to the rumor for one at the new park. 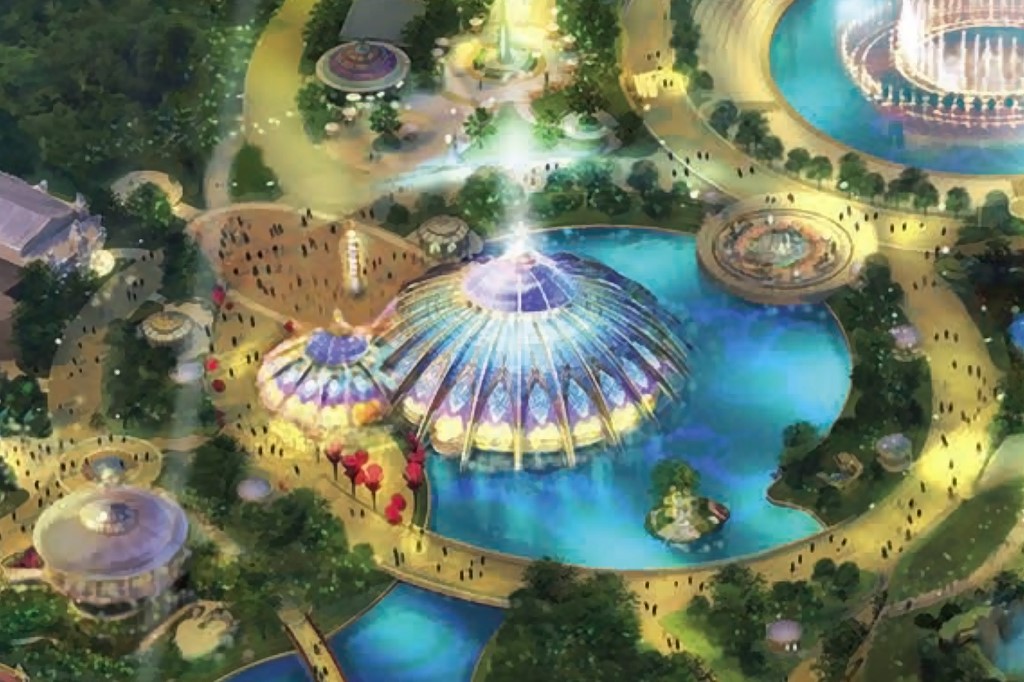 The patent, which is titled “Carousel ride systems and methods” describes a new type of lift system that could lower all of the seats to the same level for easier loading and unloading, and then lift them back up and down during the ride. Permits for the structure we believe could be for an indoor carousel does mention a hydraulic lift, but that could be a coincidence. 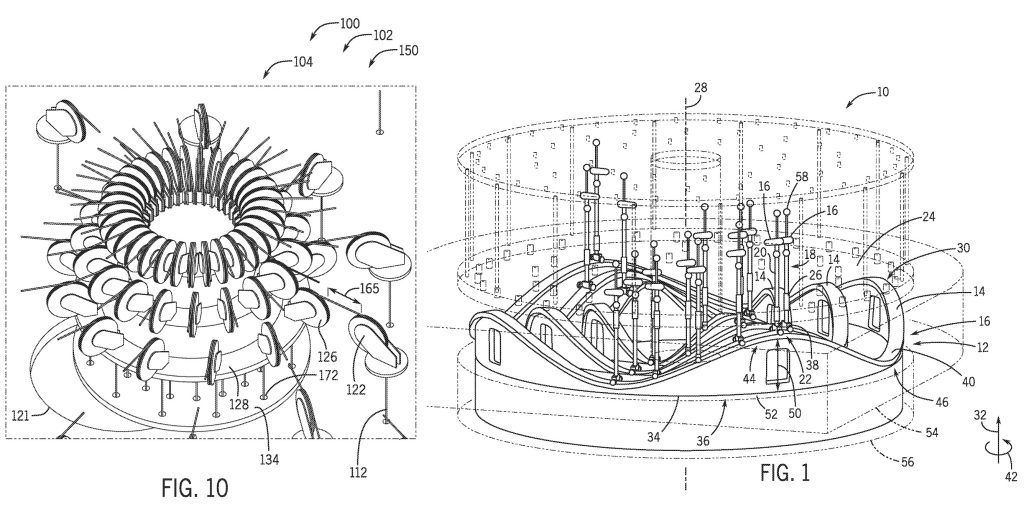 The other attraction for the hub, a dual-track racing roller coaster, also had its permits paid recently. It has long been rumored that this roller coaster will be manufactured by Mack Rides. In a recent interview, Roland Mack spoke about how they were able to resume their order from Universal, which is worth “millions in the double-digits,” after only a six-month cancellation. 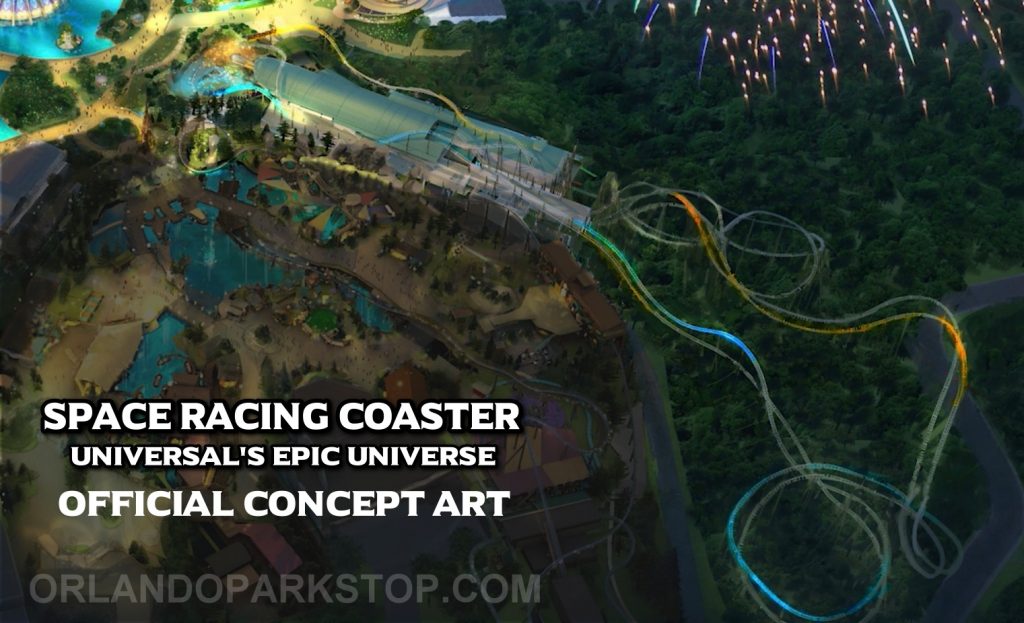 In the same interview, he mentioned how Universal not only had Mack Rides resume production on the large roller coaster, but apparently two other projects as well. In a quote from the interview, (which has been translated from German,) he said “The nice thing is that two more installations were added. So you see the optimism…” 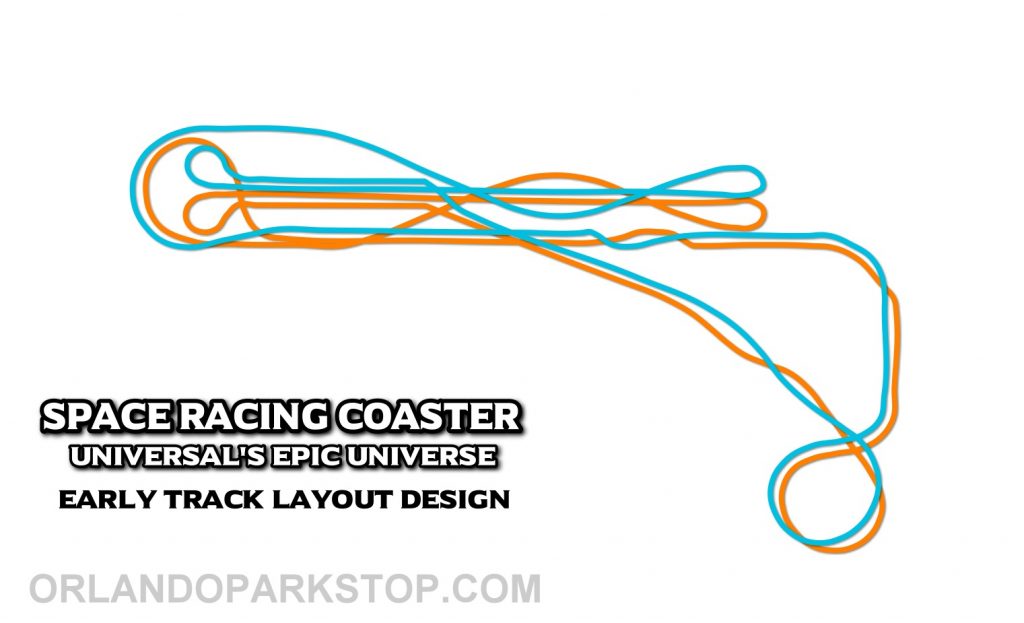 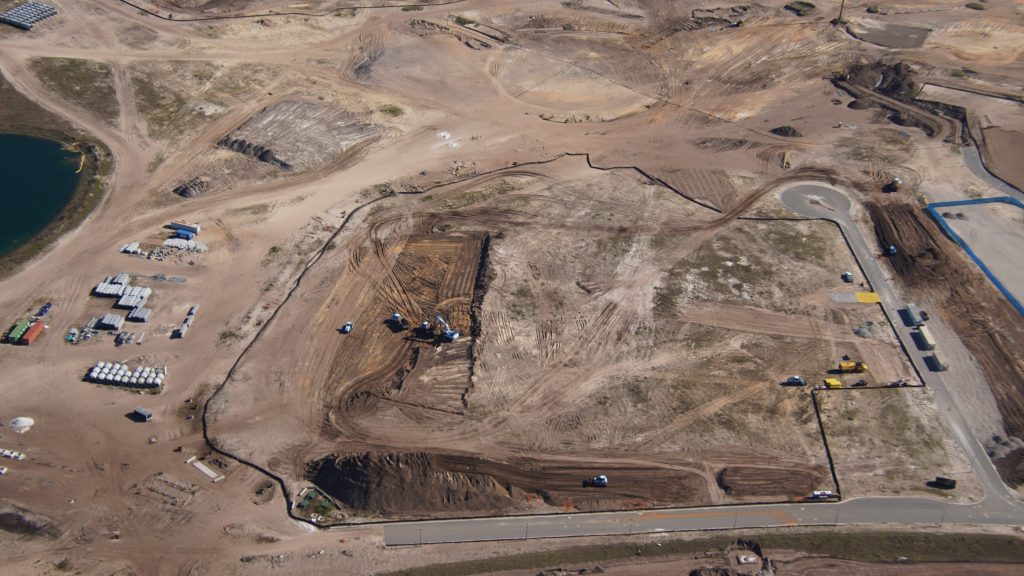 As permits and plans are being approved, areas of the park are being prepared for construction. The area we believe will be home to the Universal Classic Monsters has been outlined since our last update. A section of the land is being excavated where the show building for the land’s major attraction will sit, rumored to be a dark ride of some sort.

While most of the permits for this area have been approved and their associated fees paid, one is still not yet ready. It’s possible that plans for the land’s second attraction are being reworked. 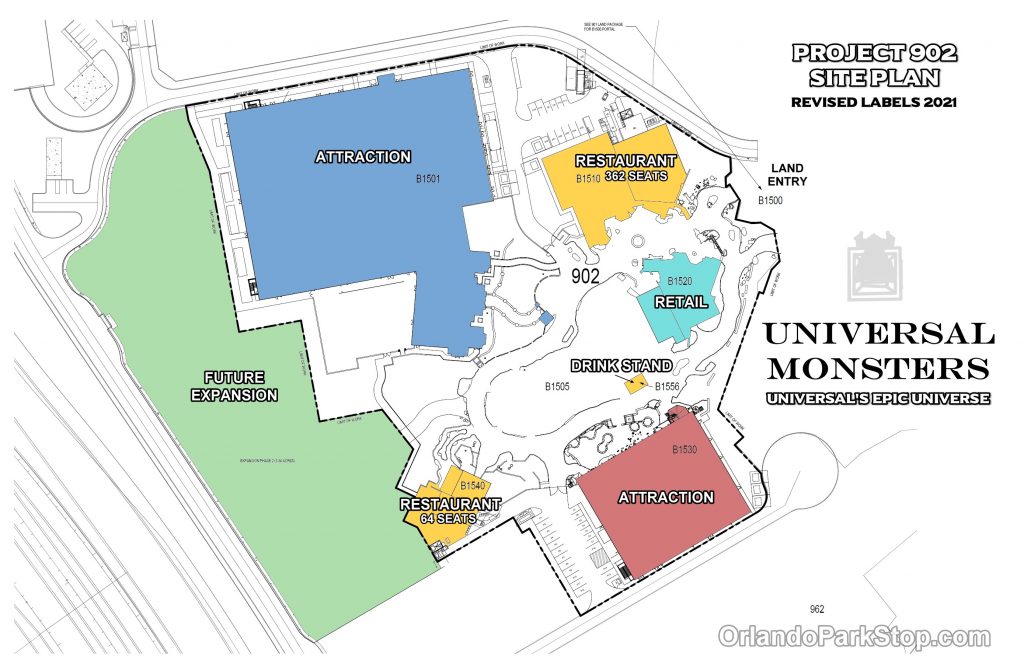 Attraction seen in red may be replaced according to rumors

Originally believed to be a theater show, a new rumor says that this side of the Universal Monsters land may be receiving a roller coaster attraction instead. We’ll be keeping an eye out in case we learn anything more moving forward.

The land believed to be based on the How to Train Your Dragon franchise is still awaiting a notice of commencement like the others, but most permits appear to be approved and nearly all fees paid. The land’s approved permits include multiple attractions, including a roller coaster, a water ride, and a theater with 985 seats. 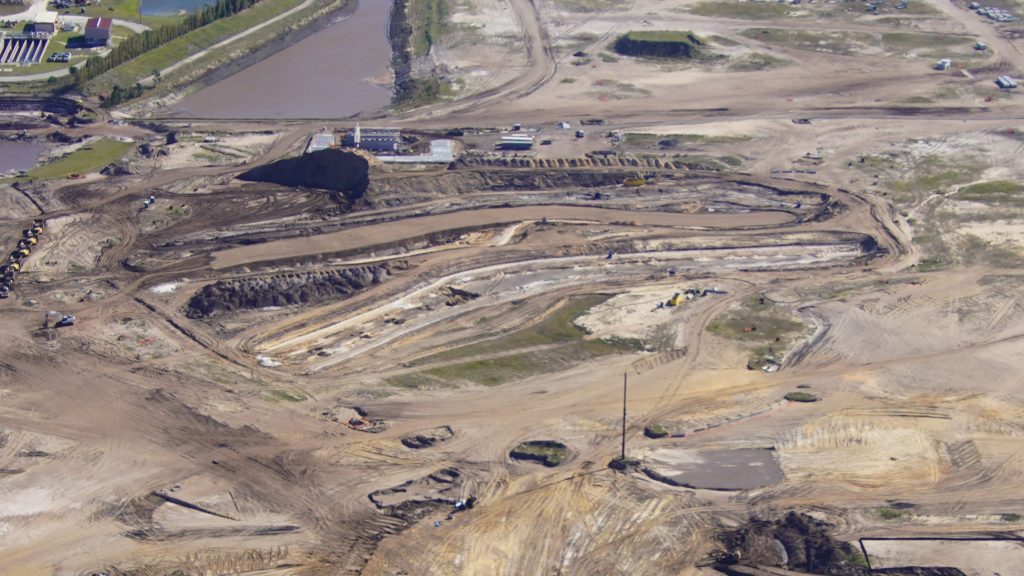 Earth moving continues at How to Train Your Dragon area, Photo: @bioreconstruct

The land we think will be based on the Wizarding World has also had all of its permits paid up, as has the area set aside for Super Nintendo World. 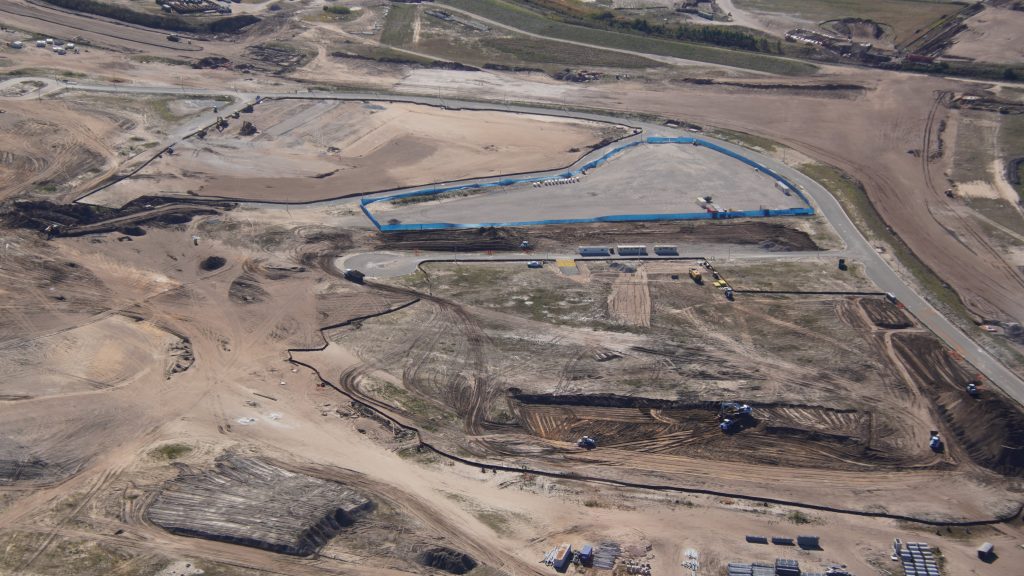 Land grading for the Super Nintendo World is moving quickly, and we can see land being prepared for the future Mario Kart ride building. 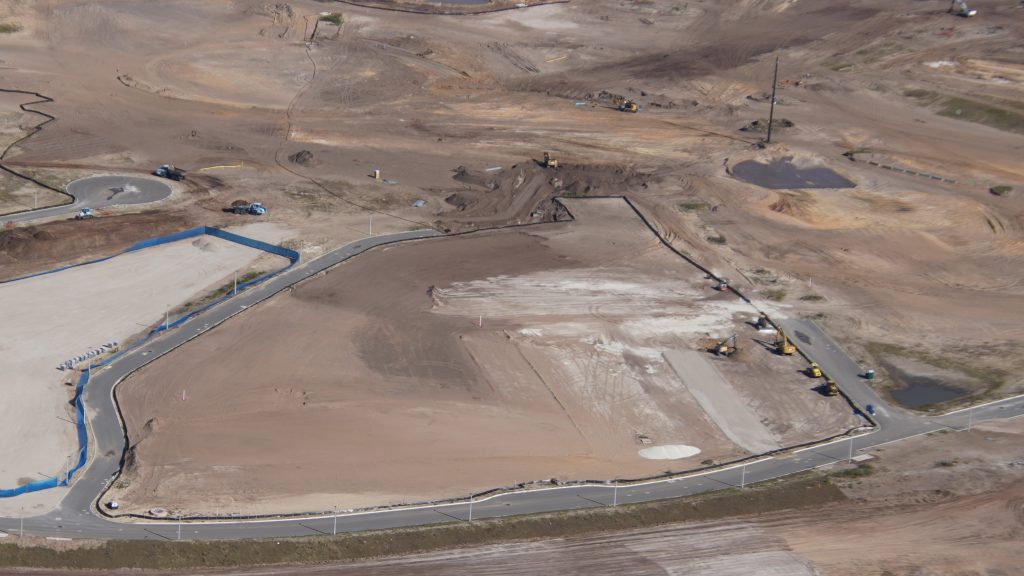 The outline for the show building for the Donkey Kong roller coaster attraction can also be seen in aerial photographs, in case there were any doubts that that attraction would be ready on opening day. 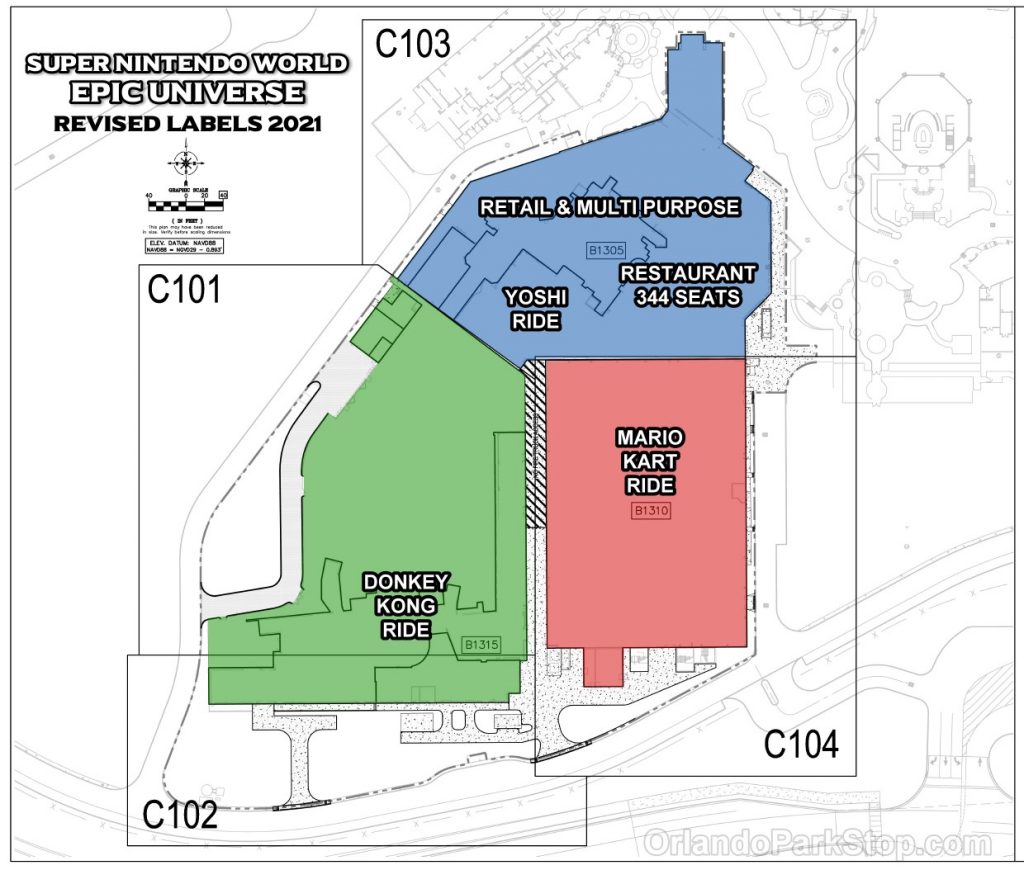 At the edge of the property, ride track that we think is for the Yoshi family attraction is still sitting, ready for installation. Many of the ride track pieces have been covered in tarps, while other supplies are being stored inside of shipping containers. 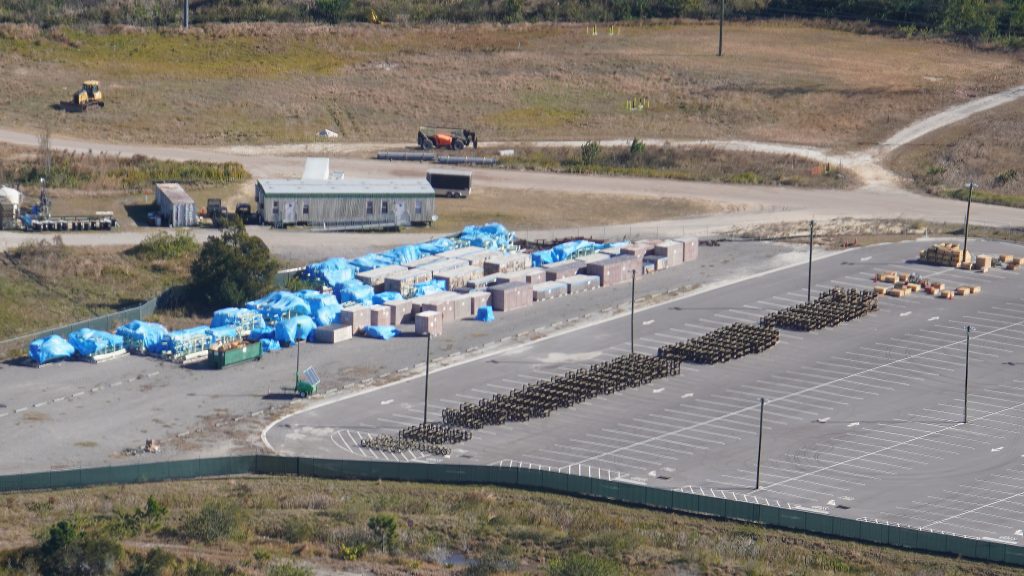 Yoshi ride track and other supplies being staged at edge of property, Photo: @bioreconstruct

The roads that lead into the future parking lot for Epic Universe appear to be ready for paving, with their distinct shapes carved out of the land. According to a recent interview in the Orlando Sentinel with an Orange County spokesperson, the Kirkman Road extension project will be completed in late 2024. 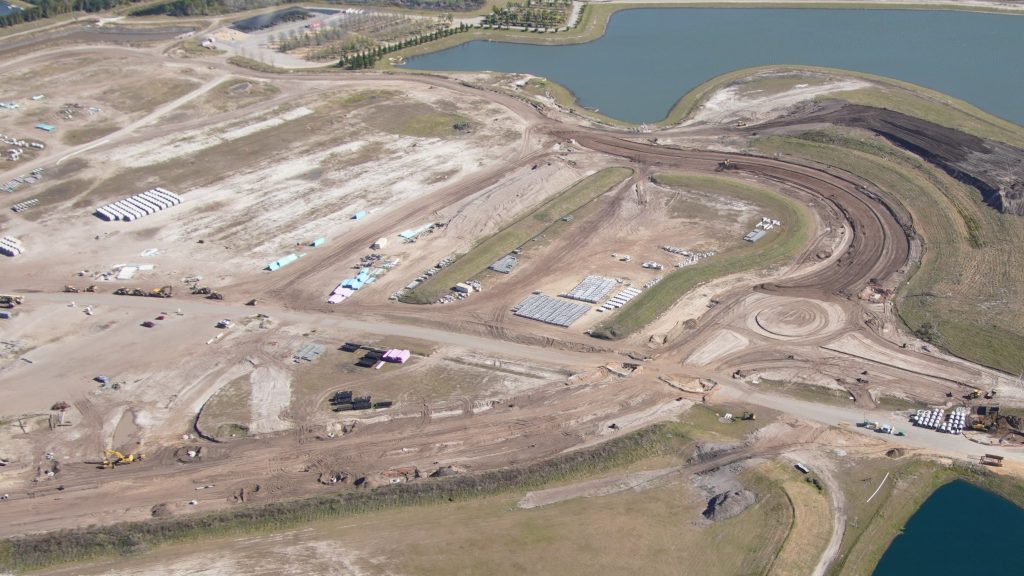 The extended Kirkman Road will connect the existing Universal Orlando Resort to the new Epic Universe theme park, located about 2 miles south, so its completion is crucial for the park to be able to open. 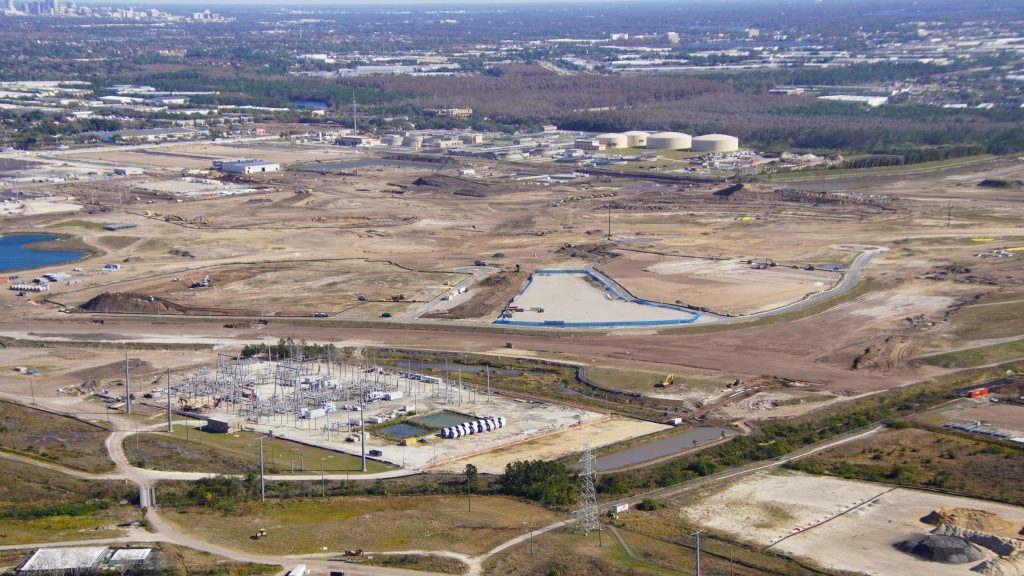 Extended Kirkman Road can be seen running horizontally through this image, Photo: @bioreconstruct

If Universal is able to hit their construction milestones moving forward, having the roadways completed by late 2024 is right in line with a summer 2025 grand opening. That could even leave several months of possible previews leading up to the big day as well.

During last week’s Comcast earnings call, CEO of NBCUniversal Jeff Shell, not only confirmed that they’re moving full steam ahead on the new park, but he also said: “We are going to make a fabulous park at Epic. We’re going as fast as we can now to make up for lost time.” 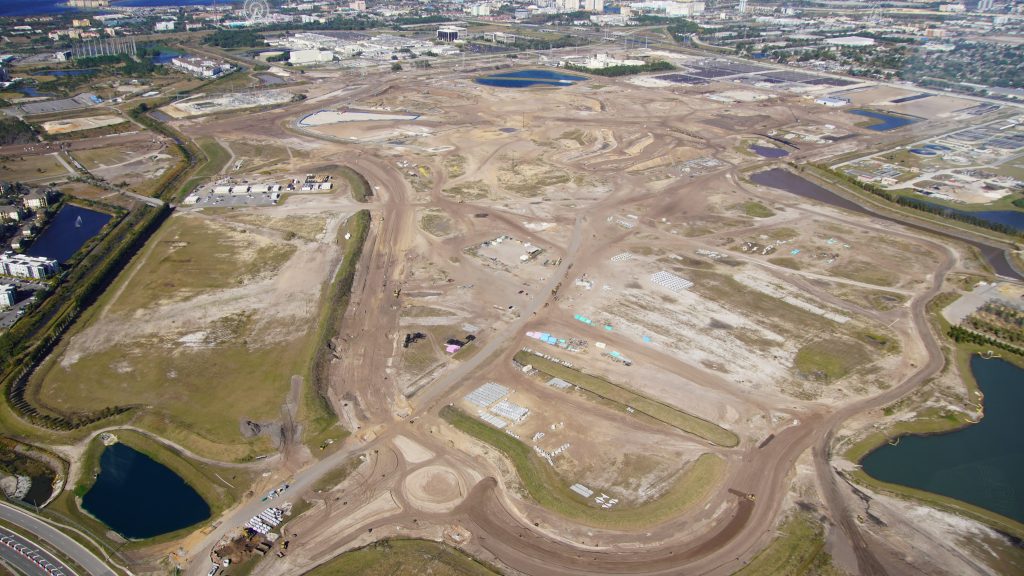 A big thanks to Bioreconstruct for sharing these amazing aerial photos. If you’re not already, you should follow Bioreconstruct on Twitter for more photos around the Orlando theme parks.

That’s all for now, but be sure to check out the video version of this story for more visuals, and see our Everything We Know story, or our How Big is Epic Universe story, for more details on the upcoming Epic Universe theme park in Orlando.