Super Nintendo World could be the most interactive theme park land ever designed. In addition to interactivity on rides like Mario Kart, the land itself will be teeming with opportunities to explore secret areas, earn power-ups, and even defeat bad guys.

But, could some colorful little creatures be hidden around the land as well? After fans spotted Pikmin hiding in the Super Nintendo World shopping bag last month, it’s starting to seem pretty likely. Let’s dive into rumors for how Pikmin could be incorporated into Super Nintendo World. (Be sure to see the video version of this story below for additional visuals.)

Rescheduled for an early 2021 grand opening, the world’s first Super Nintendo World in Universal Studios Japan will open with two rides, a restaurant, and multiple interactive play areas—including a team up challenge where you’ll have to work with others to defeat enemies like Bowser Jr. 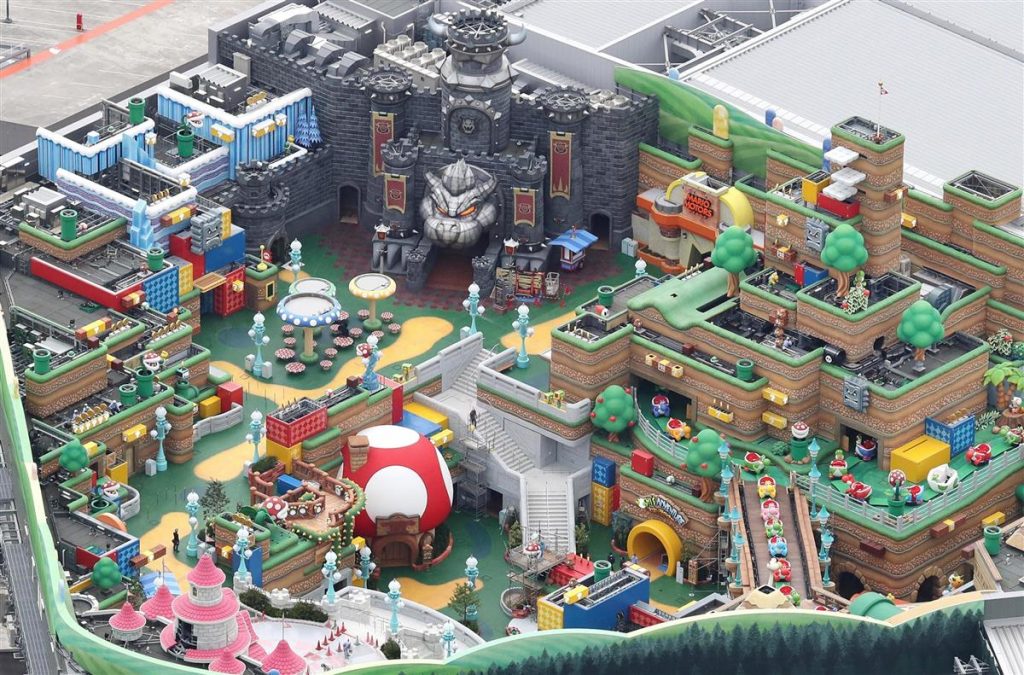 While we’re waiting for the land to officially open, Universal Studios Japan opened a Mario Cafe and gift shop elsewhere in the park. Serving adorable snacks and offering exclusive merchandise, this retail location also features the first Super Nintendo World branded shopping bags. These bags feature colorful artwork depicting the upcoming land, but as some have noticed, when you look closer, there are appear to be several Pikmin hiding in the picture.

Mario creator and Nintendo Director Shigeru Miyamoto famously once said: “The next Mario is Pikmin,” so we know he has a soft spot for the franchise. He’s even said that he feels the best game he’s ever made is Pikmin 3. So, is it hard to believe that Nintendo may have “suggested” that Universal somehow include the plant-like creatures in the world’s first Nintendo-based theme park land? 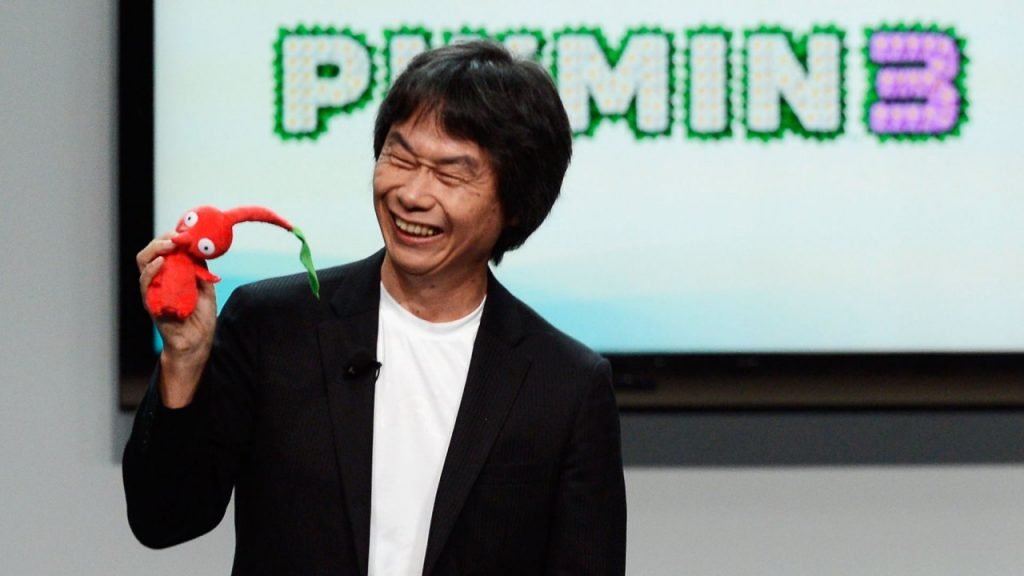 But how would Universal’s creative team find a way to incorporate little Pikmin into a world based on the Mushroom Kingdom? We do know that guests will have the option of purchasing a Power-Up Band, which will essentially be the land’s interactive Harry Potter wands. Once you have this wristband on you can interact with all sorts of things around the area. You can hit blocks and collect coins, enter hidden zones and earn badges, and even keep track of your score.

One way they could be adding Pikmin into the land, without actually having physical Pikmin hanging around, is by utilizing the AR Viewers in the land. These binoculars mounted on podiums will be located in a few places along the second level balcony, since the land itself will be split between two floors. When you look through them you’ll be able to see the real world, but with additional digital elements rendered on top. Universal even patented this augmented reality technology for use within theme parks.

Imagine using the binoculars’ zoom feature to look so closely into an area of the land, that you could spot hidden Pikmin peering around a corner. Not only would this be an easy way to add Pikmin into the world, but it could be a way for the designers to add stories waiting to be discovered. Just like the games, Pikmin may even be useful for helping you unlock hidden power-ups or secret areas. The AR Viewer patent even describes ways for interacting with what you see by using controls that are built into the binoculars.

Another rumor would have Pikmin hiding in the queues, especially for the Yoshi’s Adventure family omnimover ride, which is expected to be themed with trees and flowers—perfect for Pikmin to be hiding in. This could be accomplished using touch points for your Power-Up Band, and be a way for you to keep busy while waiting in line for the ride. Once you spot a touch point and tap your band to it, it could activate a small effect, like the interactive wands in The Wizarding World of Harry Potter, except here it would be for tiny Pikmin characters.

Star Wars: Galaxy’s Edge employs something similar using the Play Disney app’s Datapad feature. This allows guests to keep themselves occupied while waiting in line for Milleneum Falcon: Smugglers Run by scanning codes and unlocking features hidden around the queue. 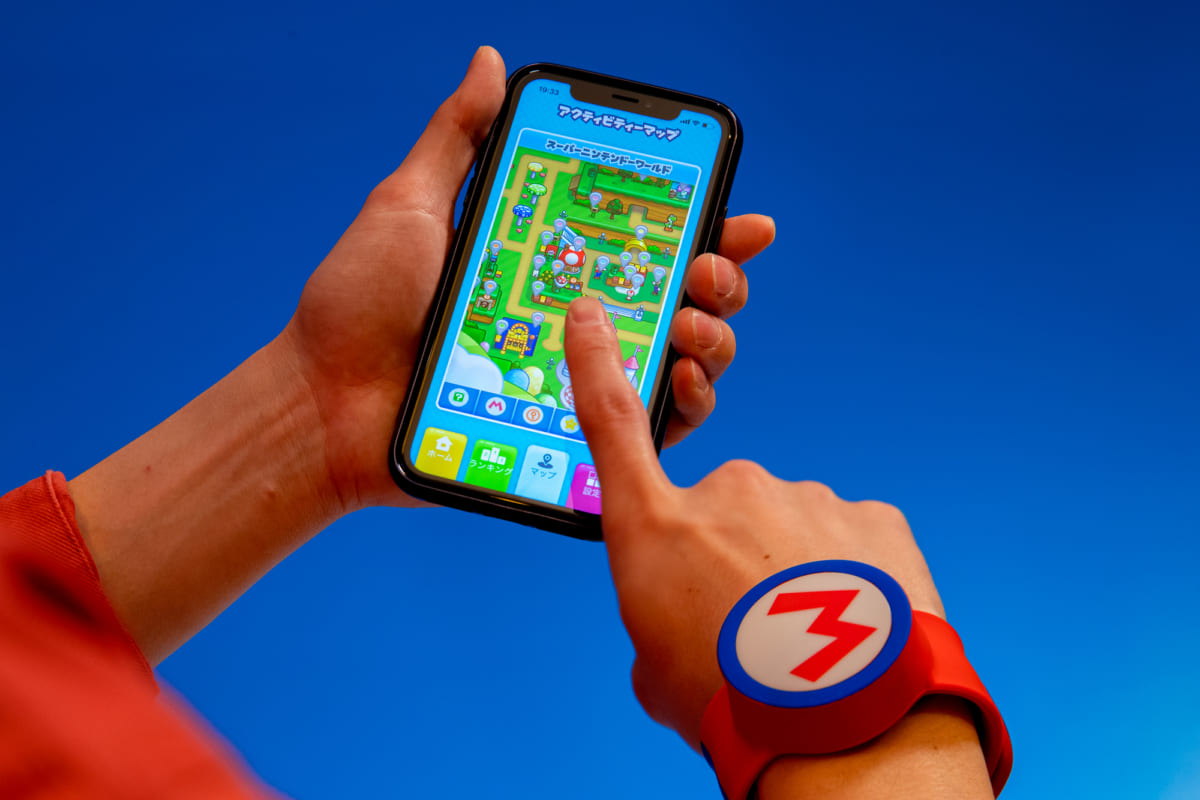 Guests will be able to interact with the land using an app and Power-Up Band, (Universal Japan)

Whether using the AR Viewers or touch points to collect Pikmin, you might be able to store your collection in the land’s official mobile app. The app will be paired with your Power-Up Band, and will help you keep tabs on your collected coins and earned badges. You may even be able to earn a badge once you’ve collected all of the Pikmin!

If everything we’ve heard is true, Super Nintendo World could be the most interactive theme park land ever developed. It is building off of the technology of the Wizarding World’s interactive wand experiences—as well as other concepts like Galaxy’s Edge’s datapad—while combining highly interactive ride experiences as well. The Mario Kart ride is rumored to allow us to compete against another car, hurling virtual Koopa shells at various targets, like a modern take on rides like Men in Black: Alien Attack and Toy Story Mania. 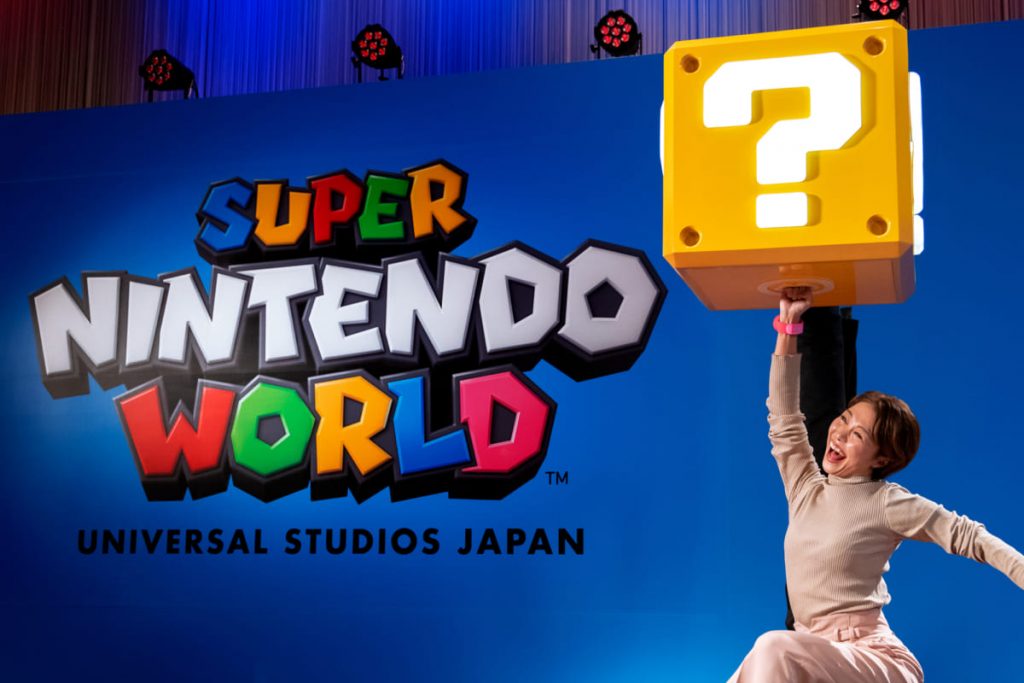 While this all sounds incredibly impressive, to me, the only possible theme park land that could even come close to this level of interactivity would probably be one based on Pokémon—where you’d gotta… you know, catch ’em all.

That’s all for now, be sure to subscribe to the news feed or enter your email below to never miss an update on Super Nintendo World. And check out the video version of this article for additional visuals.