Universal Orlando has now announced every haunted house for Halloween Horror Nights in 2021 with the reveal of five more original houses—plus, all five scare zones and two shows were announced today.

This year’s event will be held for 42 select nights beginning on September 3 through October 31. All tickets, including multi-night tickets, have been available for purchase since last week. Check out all of the new houses and scare zones announced, as well as previously announced houses, below.

The five remaining haunted houses announced are all originals, created by the Universal Entertainment team, and are not based on any property. Some however, draw inspiration from lore within the Halloween Horror Nights’ history itself.

See more details about each of the new houses below.

Welcome to SCarey: Horror in the Heartland

Some of the most haunting original stories from Halloween Horror Nights over the years have been set in the mysterious town of Carey – and this year, Welcome to SCarey: Horror in the Heartland will combine these stories and bring them to life once again in a first-ever haunted house that pays homage to the event’s 30-year history. Guests will be transported back to the shady township of Carey and enter familiar settings that will leave fans shrieking from nostalgia and horror. From the ghastly cave of vampires from The Hive, the decrepit attic of Dead End and the disturbing Meetz Meats human deli from Leave it to Cleaver, they’ll find no escape from the evil of Carey once and for all.

The world of Legendary Truth, an evolving story following a mysterious paranormal research group, has haunted guests via unique haunted houses throughout Halloween Horror Nights history. In Case Files Unearthed: Legendary Truth, guests will step into the well-worn shoes of the infamous Boris Shuster – the elusive private eye investigating the supernatural – as he endlessly searches for clues to a series of strange occurrences throughout New York City. Falling further into the shadowy, dark world of the paranormal, guests will face an overwhelming onslaught of ghouls, poltergeists and terrors, all while trying to solve the biggest mystery of them all – how they’ll survive…

The Wicked Growth: Realm of the Pumpkin

The beloved tradition of Halloween has more sinister roots waiting to be unearthed and as the grower of this ritual, the Pumpkin Lord is preparing for his yearly human harvest in Wicked Growth: Realm of the Pumpkin. Lured in by the familiar sights and sounds of the holiday, guests will find themselves trapped in an endless maze of traditional Halloween domains, including a dilapidated haunted house, an ominous graveyard and even a wicked witch’s cottage – all overrun by ruthless creatures engulfed in ghastly pumpkin growth. They’ll follow the ceaseless vines as they twist and turn right into the Pumpkin Lord’s lair, where he eagerly awaits new victims and is never truly satiated.

The demented side of puppetry and theatre will take center stage in Puppet Theatre: Captive Audience as guests are transported to San Francisco’s abandoned Grandeur Theatre in the early 1900’s. They’ll find the Pasek’s Puppet Troupe trapped within its ruins in the midst of rehearsing for their next grisly performance. With a fanatical need to entertain any captive audience, the troupe has turned to transforming trespassers into living puppets – dismantling and sewing them back together as life-sized marionettes for additions to their horrific encore. Will guests escape in one piece or will it be their final curtain call? No matter what, the show must go on…

Revenge of the Tooth Fairy

Revenge of the Tooth Fairy will entice guests to uncover the darker ritual behind an innocent childhood tradition. Long ago, parents struck a bargain with vicious, goblin-esque tooth fairies to protect their children from these evil creatures who crave pearly whites – all children must give up their baby teeth or pay a gruesome price. Guests will step into a heinous realm of blood, teeth and gore where these fairies extract their toothed bounty by force and the only way out is to hold in their screams and keep their mouths shut.

These five original houses come after five previous house announcements, to make a total of ten houses for the event in 2021. Prior announcements include Halloween Horror Nights Icons: Captured, Universal Monsters: The Bride of Frankenstein Lives, The Texas Chainsaw Massacre, The Haunting of Hill House, and Beetlejuice. 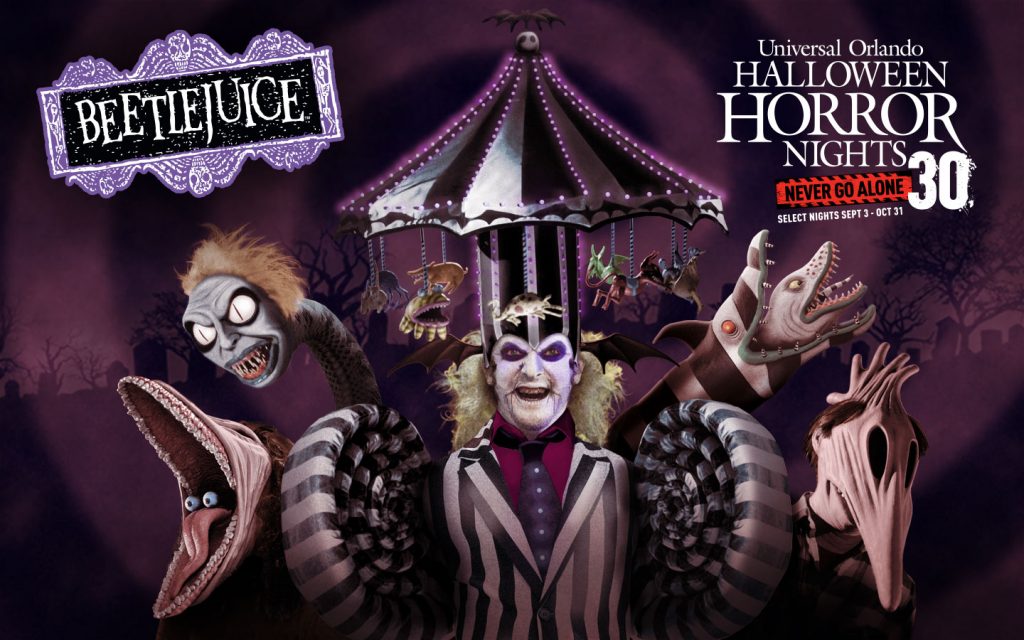 All five scare zones were also announced for the event. Construction on these areas has been visible within Universal Studios Florida over the last few weeks. See the full list of zones below.

Guests will step inside Crypt TV, a dark universe of monsters that reside in the same reality on their screens, in their pockets and now, in real life. In this nightmare world that’s overtaken San Francisco, creatures of all shapes and sizes exist, including The Look-See, the Sunny Family Cult, Harclaw and Miss Annity. Now, they’ve been brought to life in a world of fear that will engulf any guest who enters.

The most infamous characters from past Halloween Horror Nights scare zones will reunite to take over the Avenue of the Stars in 30 Years, 30 Fears. Guests will enter a gory reunion where the past has come back to haunt them with creatures of blood and bone, beastly monstrosities and chainsaw-wielding fiends lurking around every corner.

In Seek and Destroy, guests will find themselves in a New York dystopia where a ruthless alien cyber regime, led by The Controller, has taken over – relentlessly scanning the city streets for humans and turning them into fuel. With the regime’s loyal followers hiding in the darkness endlessly hunting for new victims, guests must either join them or be destroyed.

The heartless Terra Queen is back and her wicked plans to remake the world in her terrifying image will take root in Central Park, transforming it into the grisly Gorewood Forest. Guests will find nowhere to hide from her menacing minions as they harvest fresh blood to feed her ever-growing power.

Eddie Schmidt, Jack the Clown’s diabolical brother, is returning to Halloween Horror Nights to film a gory Hollywood sequel in Lights, Camera, Hacktion: Eddie’s Revenge – except this time, the monsters are real. Vampires, evil clowns, creatures from the watery depths and other horrific beings from event’s past will roar on the scene where guests will make their short, and painful, cameo.

Two shows were also announced for this year’s event. One will take place over the Universal Studios Florida lagoon, and the other will be a stage show.

Marathon of Mayhem: Carnage Factory, will be a brand-new nighttime lagoon show that will transform the expansive Universal Studios lagoon into renowned visions of fright highlighting some of the top names in horror and Halloween Horror Nights history that are featured in this year’s event.

something sinister is on its way 😈 pic.twitter.com/nMUa2hhYUB

Plus, the HHN Tribute Store will be returning for 2021 – an immersive retail location designed to celebrate the world’s premier Halloween event featuring themed rooms decked with specialty merchandise, a variety of unique treats and more.

Halloween Horror Nights 30 will run from September 3rd to October 31st at Universal Studios Florida. Tickets are on sale now. Stay tuned for additional details, including any changes to safety precautions and construction updates. 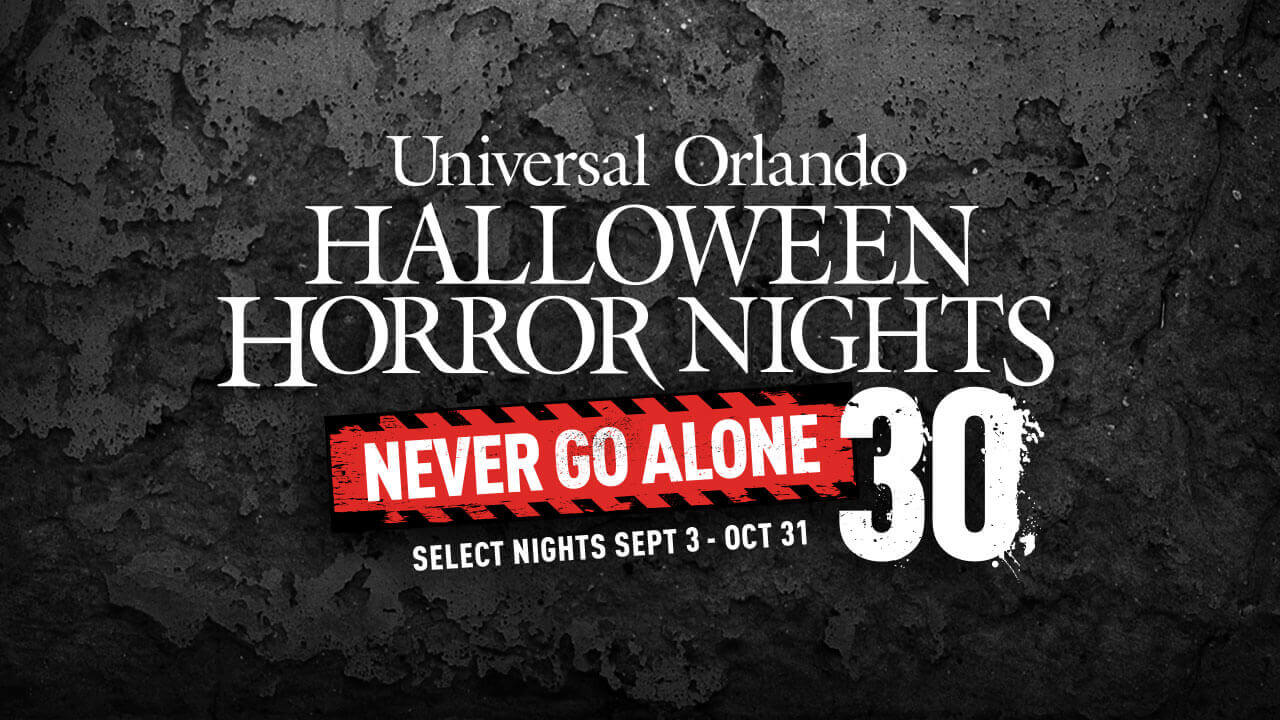