So far only four houses have been officially announced for Halloween Horror Nights in Orlando, but thanks to supposedly leaked details and a new speculation map, we might have a complete list of all 10 houses for 2022.

Let’s check in on all the official and unofficial information, including possible house names, details, and locations in today’s news update. Check out the video version of this story below for additional visuals.

All Houses Have Been Officially Announced: Learn More

Both Universal Orlando and Universal Studios Hollywood have announced four haunted houses so far for this year’s event. 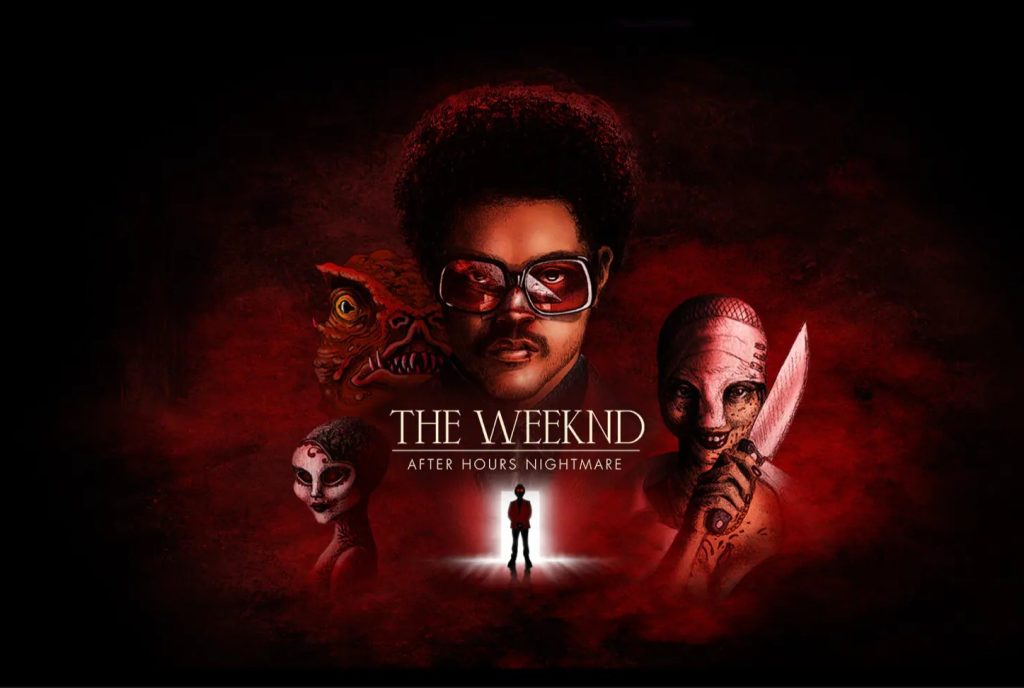 The Weeknd: After Hours Nightmare is inspired by the top songs and dark music videos of The Weeknd’s album “After Hours.”

The Horrors of Blumhouse is a double-feature maze based on the Blumhouse films “Freaky” and “The Black Phone.” 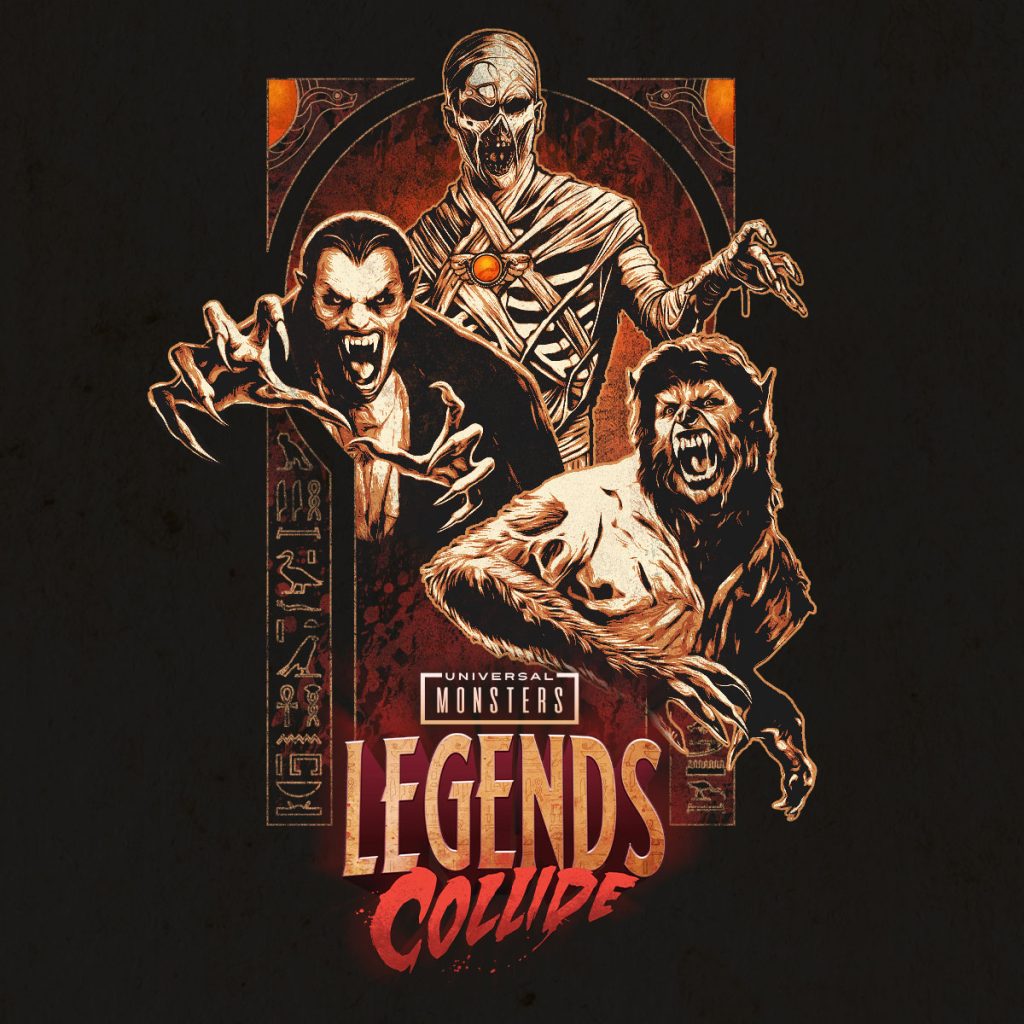 And Halloween is another house based on the original 1978 John Carpenter film. 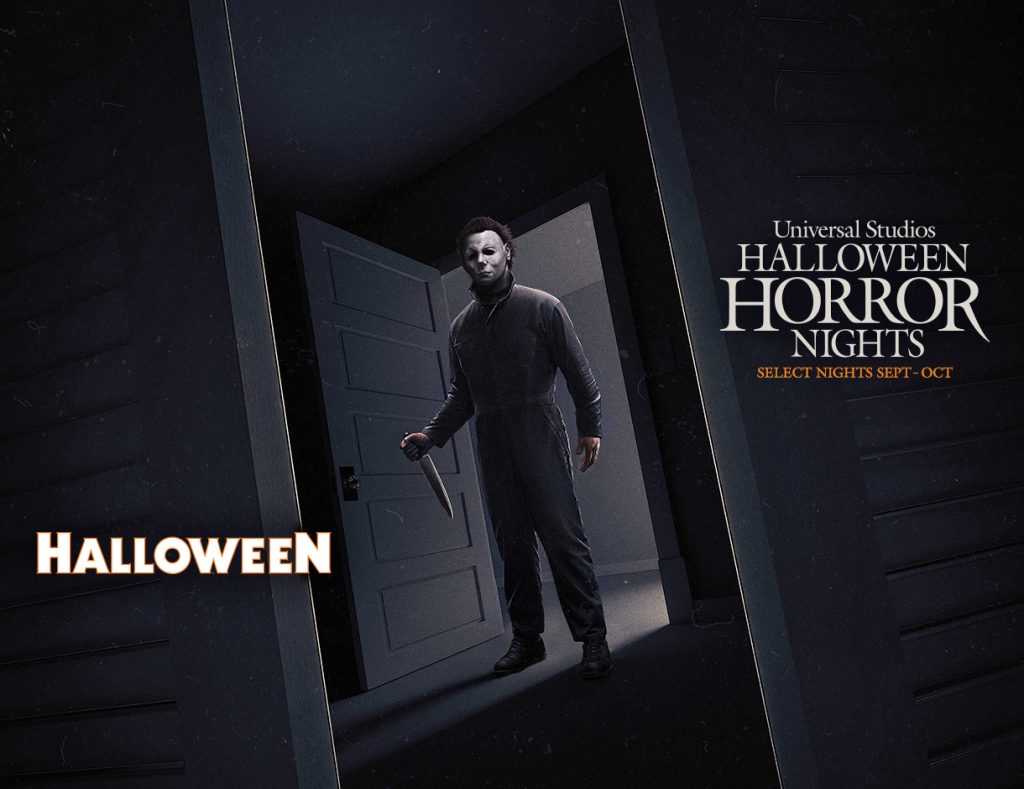 An image started floating around this week on social media that appeared to contain the names for most of the mazes in Orlando. From what we can tell, these probably are the official names, and they did line up with everything on the latest speculation maps.

In addition to the four officially announced houses so far, there appear to be another 5 original houses that we’ve learned the names for from this leak:

Witches Brew Spirits of the Coven, which is rumored to be a play on brew and spirits as names for drinks at a bar.

Dead Man’s Pier: Winter’s Wake, which has been rumored to be the cold house for this year, perhaps even containing the snow effect.

Fiesta De Chupacabras, which is in line with the rumored cryptizoological creature house we spoke about earlier in the year.

Descendants of Destruction, which was originally listed as a sequel house to 2018’s Seeds of Extinction on the spec map.

And finally, the last leaked name was Bugs: Eaten Alive, which was just listed as Bug House originally on the spec map, and is pretty self explanatory.

Adding these 5 original houses to the 4 officially announced houses, that still only makes 9 total that are now known, (if the leak is to be taken literally). But there will be 10 haunted houses at this year’s event in Orlando. So, what’s left?

The last speculation map before today had the 10th house listed as The Evil Dead, but perhaps due to a right’s issue—or it was just based on a bad rumor—it does not look like we will be getting that house after all. 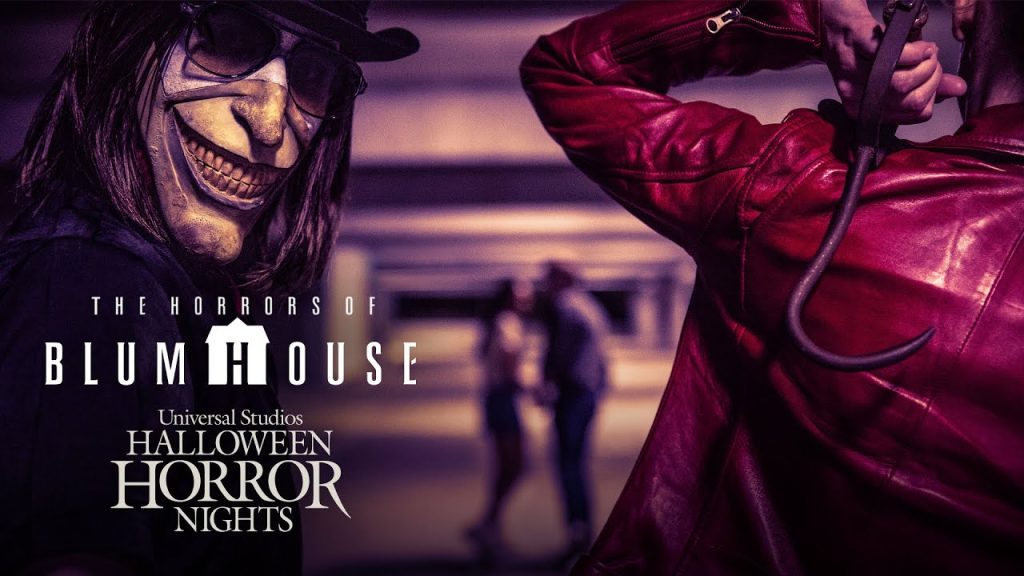 The new theory is that instead, the 10th house will be yet another original property, which today’s brand new, AND FINAL, speculation map from Horror Night Nightmares is calling “PRISON.” It’s possible this original could somehow tie into the lore of Hellgate Prison from prior houses.

Most of the other houses listed on the final spec map for Orlando have also been updated with the final house names, either from official announcements or the leaked image. 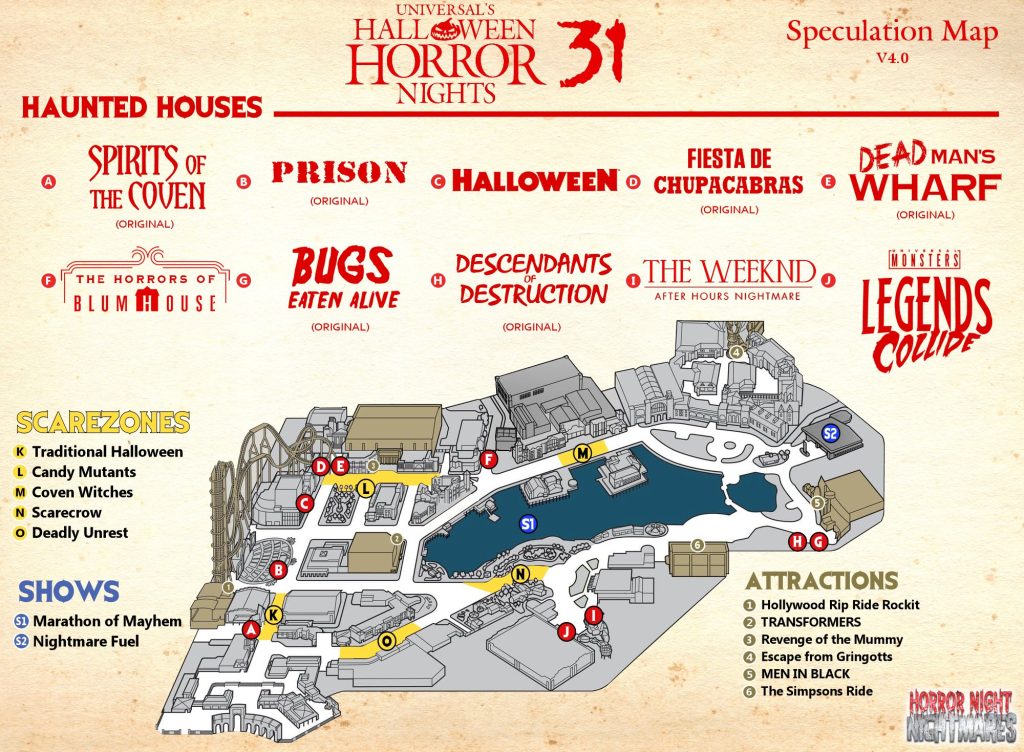 Scare Zones have also been updated on the current map, some of which are already under construction inside of Universal Studios Florida. 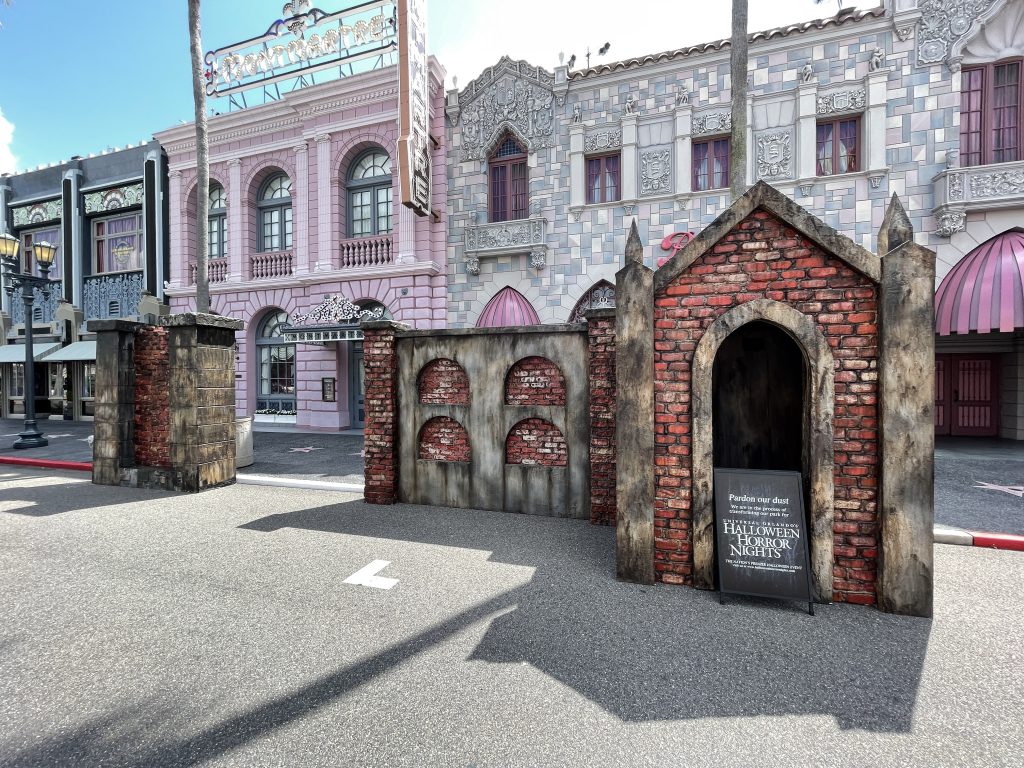 Lighting, trusses, and even speakers are starting to show up in various areas around the park as well in preparation for the event, which begins in just about a month from now. 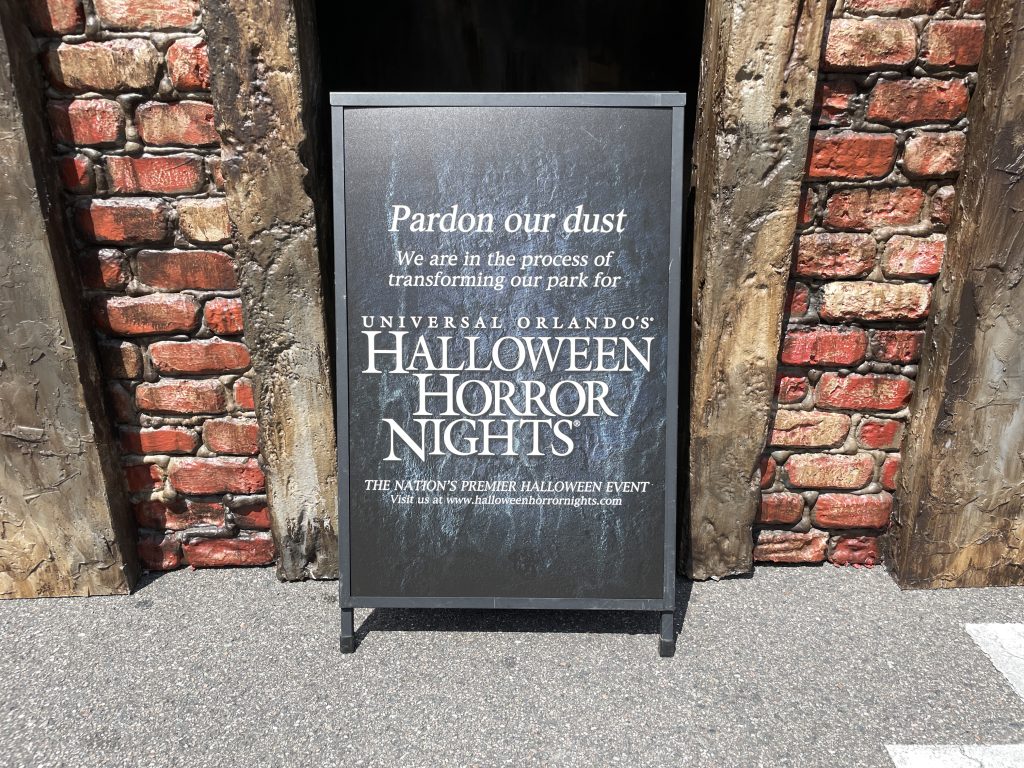 We are expecting two shows again this year, another fountain show in the lagoon, and what many believe will be a sequel to the popular Nightmare Fuel show from last year.

Despite earlier reports otherwise, this stage show will be able to perform on the Fear Factor Live stage, since it was not demolished as the 2024 Harry Potter expansion was cancelled according to permits.

The long awaited multi-night tickets are finally on sale now, including Rush of Fear and Frequent Fear.

Scareactor Dining Experience has returned for 2022, despite the Monsters Cafe closing permenantly and being partially demolished currently. Instead, the dining experience will take place within Louie’s Italian Restaurant this year. 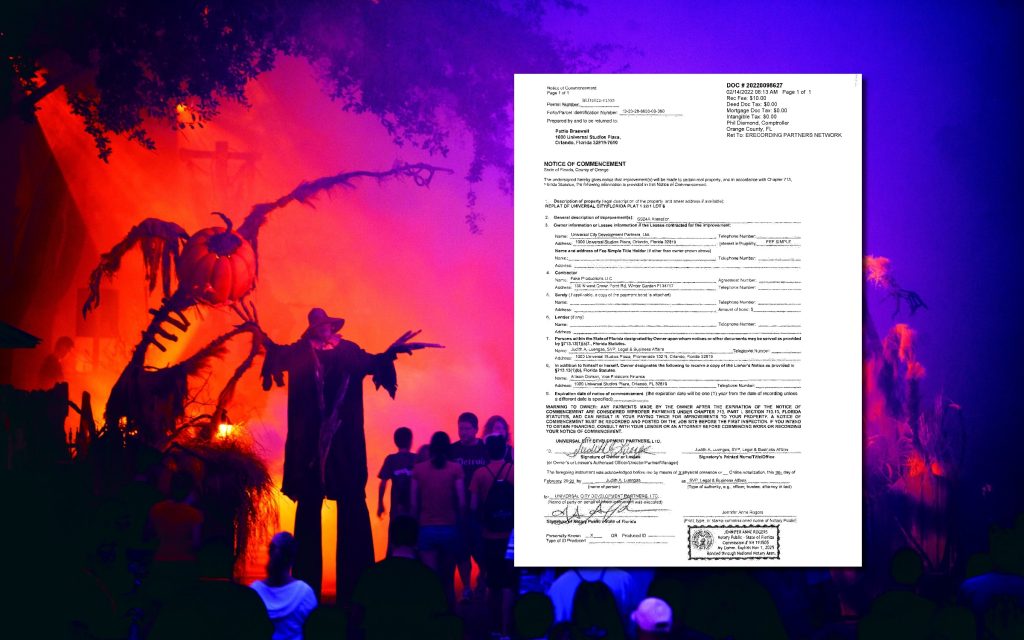 Permits have been filed for all 10 house locations this year, including 5 sound stage locations, which are rumored to house Halloween, Witches Brew, Chupacabra, Dead Man’s Pier, and the rumored prison house. 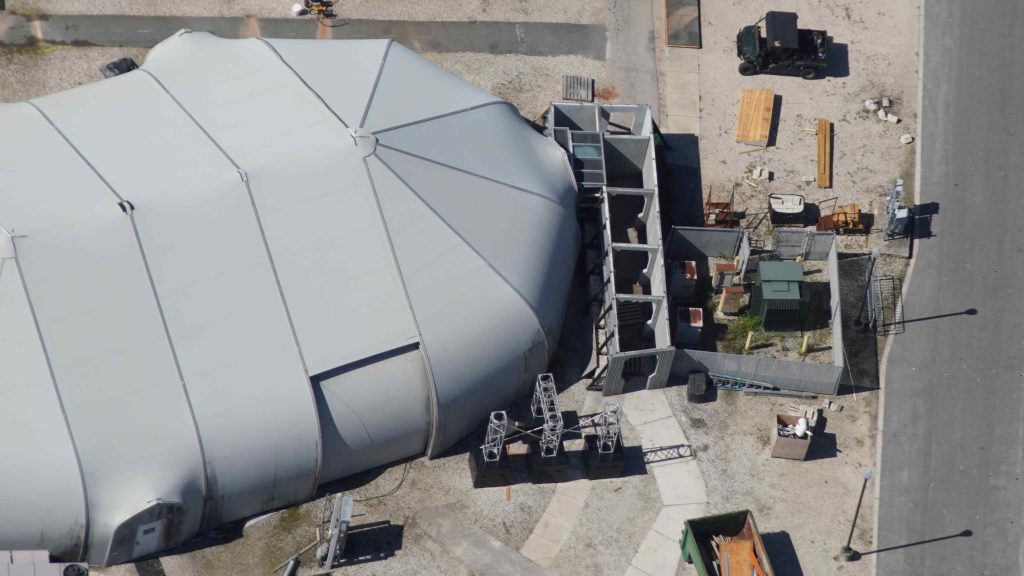 Recent construction outside of one of the tent houses, Photo: Bioreconstruct

The tents will be home to Bugs Eaten Alive and Descendants of Destruction. 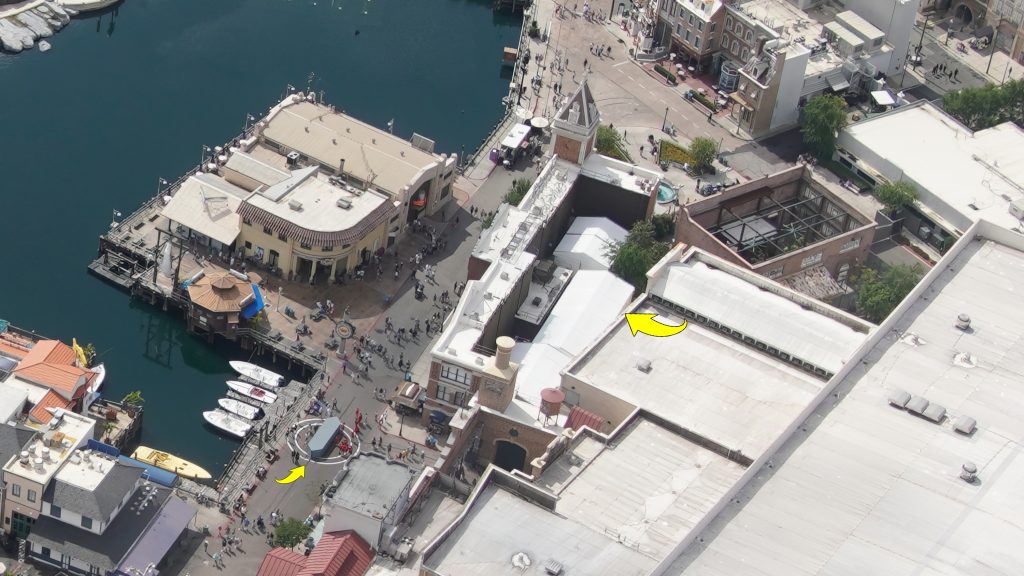 And the final house, Horrors of Blumhouse, will be located within a new temporary location for this year in the Fast and Furious: Supercharged queue.

Normally the MiB tent is used, but since construction was expected to be ongoing for the Harry Potter expansion, they planned the house for this temporary location instead. Unfortunately it was too late to move it when the Potter attraction was cancelled. 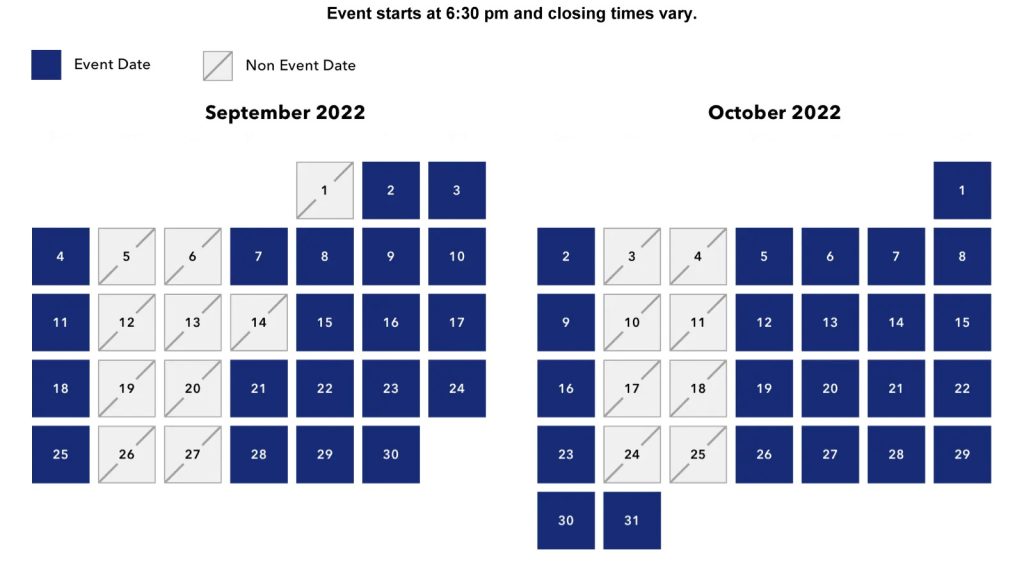 Halloween Horror Nights 31 in Orlando will run from September 2nd through October 31st in 2022, on select nights. And with so little time between now and opening night, and still 6 houses left to announce, we’re in for a wild ride the next few weeks!

All Houses Have Been Officially Announced: Learn More 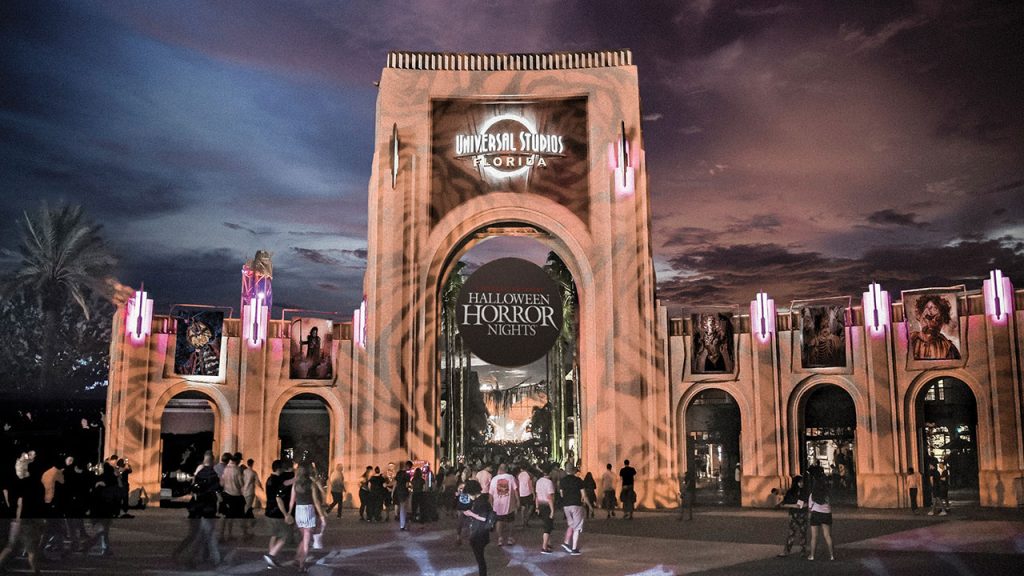 While we wait, check out the full line of Halloween Horror Nights inspired candles and wax melts from Souvenir Scents. Including ones based on last year’s Puppet Theatre and Wicked Growth, classics like Krampus, Scarecrow, and Yeti, and even HHN Fog! Use my promo code PARKSTOP to save 15% of your entire order at SouvenirScents.com.

Subscribe to the news feed or enter your email below to never miss an update. Official Images: Universal Orlando Resort | Other images as captioned